The Australian Suburbs Where It’s Cheaper To Buy Than Rent

If you’re looking to buy property in one of Australia’s major cities, you’ll know the situation is dire. Property prices have been steadily rising for years at a rate much faster than the average wage, making it tough for first home buyers.

However, a new report shows there are actually some places in Australia where it’s cheaper to pay off a mortgage than to pay rent – and they’re closer to state capitals than you probably think. Here’s where you should be looking.

Australian Treasury has announced a new policy supporting young people hoping to buy their first home. However, the restrictions placed on it are making it a tough sell. Here's how it works.

An analysis created for the Australian Financial Review (AFR) by CoreLogic shows a number of suburbs throughout Australia are not completely out of reach for the average first home-buyer. Based on a 20 per cent deposit for a 30-year loan at an average 4.25 per cent discounted variable rate, CoreLogic’s report indicated there were still some suburbs in Australia where it was cheaper to buy than rent.

And you don’t have to live in the world’s most secluded suburb to do so.

Suburbs in Brisbane topped the list, according to AFR’s report, where 138 suburbs out of 322 housing markets were cheaper to pay off a mortgage as opposed to renting.

Central in Brisbane’s south has an average difference in monthly repayments of around $481. That means you’re saving nearly a third of potential rent repayments. 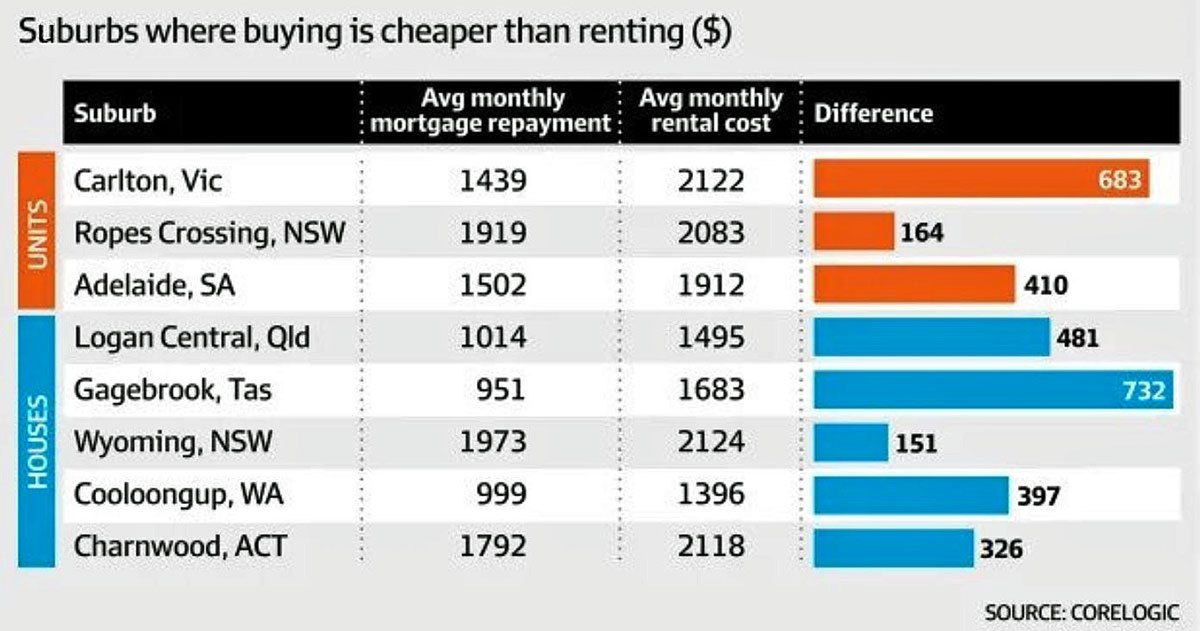 Where should I go to buy a new unit?

Unsurprisingly, there were very few places in Sydney or Melbourne to make the cut but if you’re looking to buy a unit there, it’s cheaper than renting in Melbourne’s Carlton, Sydney’s Ropes Crossing and Adelaide’s CBD.

Carlton, being an inner city suburb, has an average monthly rental cost of around $2122 but mortgage repayments hit just $1439 per month. That’s saving you a difference of $683 per month.

Where should I go to buy a new house?

In terms of buying a house, something that typically costs much more than a unit, you’ll have to consider somewhere a bit further from the city limits. In NSW, Wyoming on the Central Coast, north of Sydney, has a difference in repayments of around $151. For Tasmanians, it’s Gagebrook within a 30-minute drive of Hobart for a $732 monthly difference. In Western Australia, Coolungup, an hour south of Perth, has a difference of nearly $400 while the ACT’s Charnwood, 30 minutes from Canberra’s centre, will save you around $326 per month.

While it’s ideal to live close to urban centres if you’re looking to buy, sometimes moving a few minutes down the road is a small sacrifice to make if breaking into the property market is your priority.

If you haven’t purchased a property before, you might soon be eligible for the First Home Loan Deposit Scheme – you can read all about it here. You should also tick off this checklist to increase the odds of your home loan getting approved. Here are some of the better options in the market right now: