I’m Comedian Demi Adejuyigbe, And This Is How I Work

Demi Adejuyigbe has written for The Good Place and James Corden, co-hosted the podcasts Punch Up the Jam and Gilmore Guys, and turned the 21st of September into an internet holiday. He’s written fake credits songs for Space Jam, Black Panther, Get Out, Infinity War, Ready Player One, Aladdin, a Lando movie, and Succession.

He’s become famous for messing about on the internet, but his most public project right now is the live comedy show he co-hosts in L.A., Everything’s Great! Over email, Demi told me about his career path, his wild projects, and how he made that September 21 video with the mariachi band.

Current gig: Nada! Writer/comedian/performer. (Most recently, writer on The Late Late Show with James Corden & co-host of Punch Up The Jam)

One word that best describes how you work: Frenetic I grew up in Plano, TX and was always interested in writing and video production. I taught myself video editing and effects from pirated copies of After Effects and Final Cut Pro through online tutorials while I was in middle school, initially for school projects, but it evolved into a skill I used mostly for making commercials for online competitions and short sketches with friends.

I liked it so much it felt like “the thing” I wanted to do with my life, so I went to the University of Texas at Austin for film and kept at it. In my last semester I moved to Los Angeles and got an internship working with comedy producers and then a job as an office manager at an animation studio. Shortly after that, I started doing a podcast about Gilmore Girls (called Gilmore Guys) with a friend that I’d met through Twitter.

The connections I made through those three gigs helped me branch out into different areas of comedy and writing, all while giving me the freedom to figure out what kind of comedy I liked and foster the skills to produce my own things (i.e. learning that I could make musical comedy by teaching myself Logic and composition). I’m a writer and a comedian, and both have very similar responsibilities. Both require me to produce comedy, but as a writer I’m often doing it for characters or concepts outside of myself, and as a comedian I’m often performing or producing comedy from my own voice or from a disembodied “idea” (i.e. what if X did Y).

Take us through a recent or notable workday.

Every year around September 21st, I shoot a video of myself dancing to a remix of Earth, Wind, & Fire’s “September” and release it on 9/21 (the date mentioned at the top of the song.)

This year, we shot the video two days prior, on the 19th, and had to spend the day before setting up my apartment with all sorts of rigs and props and decorations for it, which included a confetti/glue wall, emptying out my refrigerator so I could hide in it, editing myself into the music video for “September,” rigging up strings and balloons for a banner drop, rearranging my furniture, doing a rehearsal walkthrough of the video with my co-producer Marina Shifrin, and bringing a mariachi band into my apartment to perform the song.

And then after all of that, doing the post-production and editing and remixing of the song itself over the next two days. 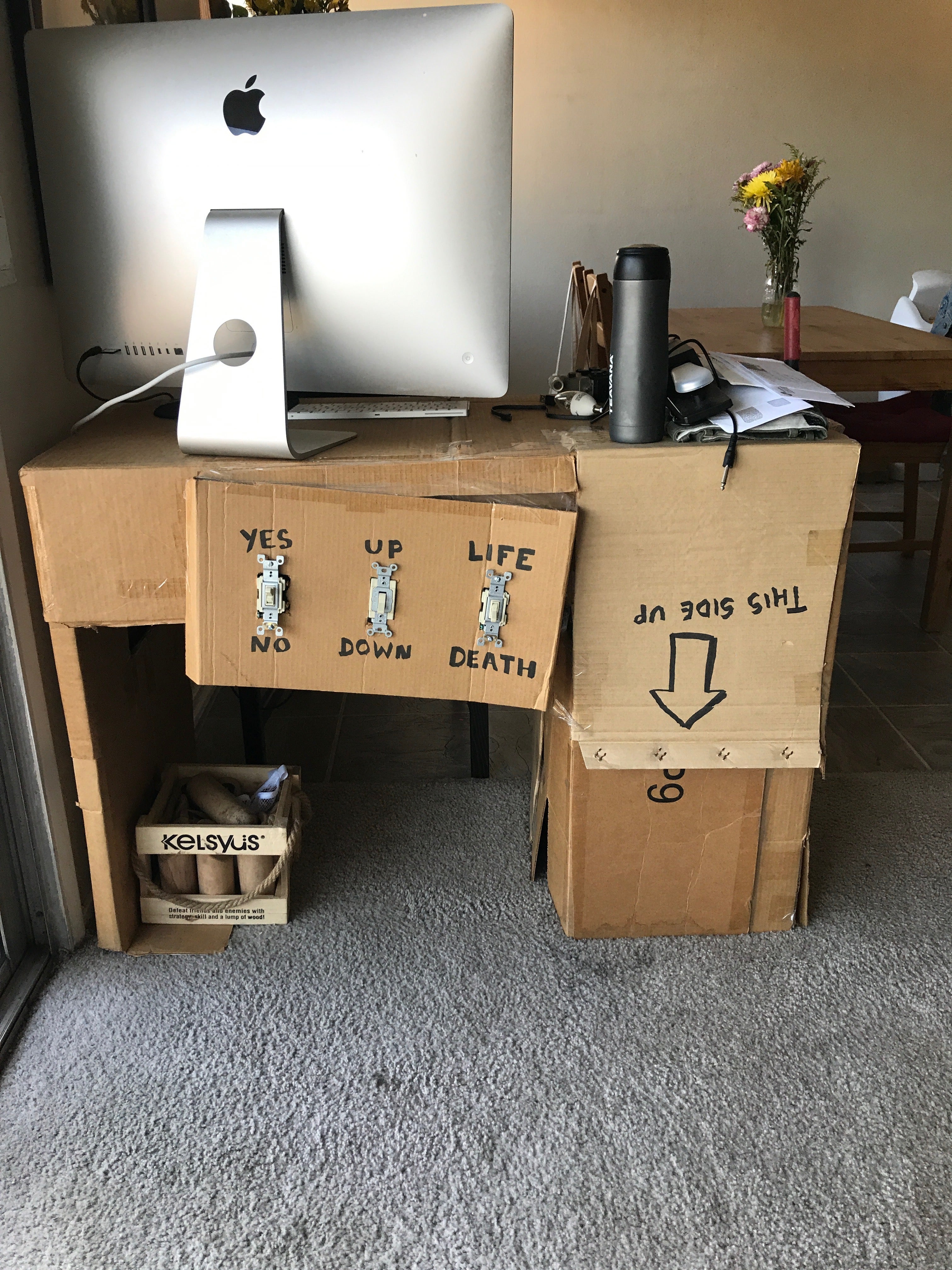 You spoke at the 2018 XOXO Festival about exploring a wider range of creative work and trying to mature as an artist. How has that played out in the last year?

It’s been a tough thing to do! Especially since, even as I spoke at XOXO, I had a series of jobs that were my day-to-day focuses and kept me from focusing entirely on that wider range of creative work.

I’ve since left the show I was working on and quit the podcast I was co-hosting in order to focus on doing those things—things like developing projects of my own and writing movies—and started doing a monthly live show in Los Angeles that allows me to do more live, in-person performing and forces me to create a completely new, live bit every month. It’s definitely been good for my maturing as an artist, and for allowing me to work more from my own point of view/voice.

And on my phone (oh boy): Letterboxd, Lightroom, Music Memos, Metronome, and Google Maps. (I can live without Instagram but I use it a lot, and I am trying like hell to not use Twitter so I don’t keep the app on my phone.)

I also have a cheap Casio keyboard and an Akai MPK Mini MKII keyboard that I connect to my computer whenever I’m composing a song, and a Shure mic that I record from through a Zoom H6. I also just have a Chromecast and a Roku that I take everywhere because I’ve been spoiled by technology and I like to watch TV shows on the TV, even when I travel!!!! 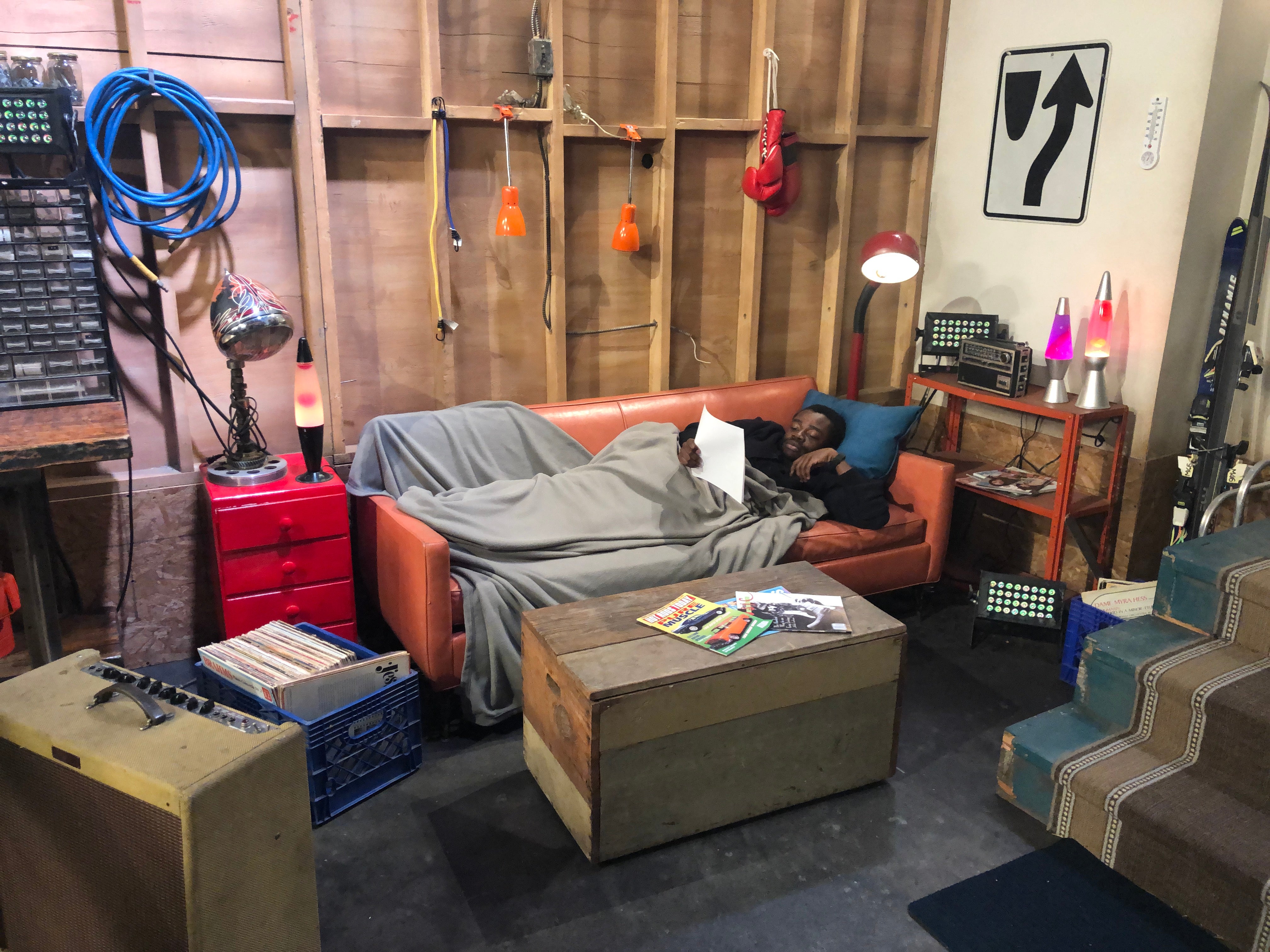 I don’t have a “standard” workspace, and it changes a lot depending on what I’m doing. But when I’m writing, it’s often just from my couch in my living room on my laptop.

Same with editing, if it’s something small like cutting a video or a non-intensive After Effects project, I’ll do it on the MacBook on the go, but when I have to work on something that’ll need a lot of processing or rendering time, I do it on a cheap desk in my living room that is dressed up to look like it’s built entirely out of cardboard (from a series I shot with some friends—I just liked it so much I kept it.) I also tend to record things on a desk in the corner of my bedroom, since my recording setup is so mobile and can be torn down when it needs to be.

It’s not much of a hack, but I love recording Favourites for editing audio in Audition and just letting an entire sequence of editing fly automatically when I have to do it repeatedly. 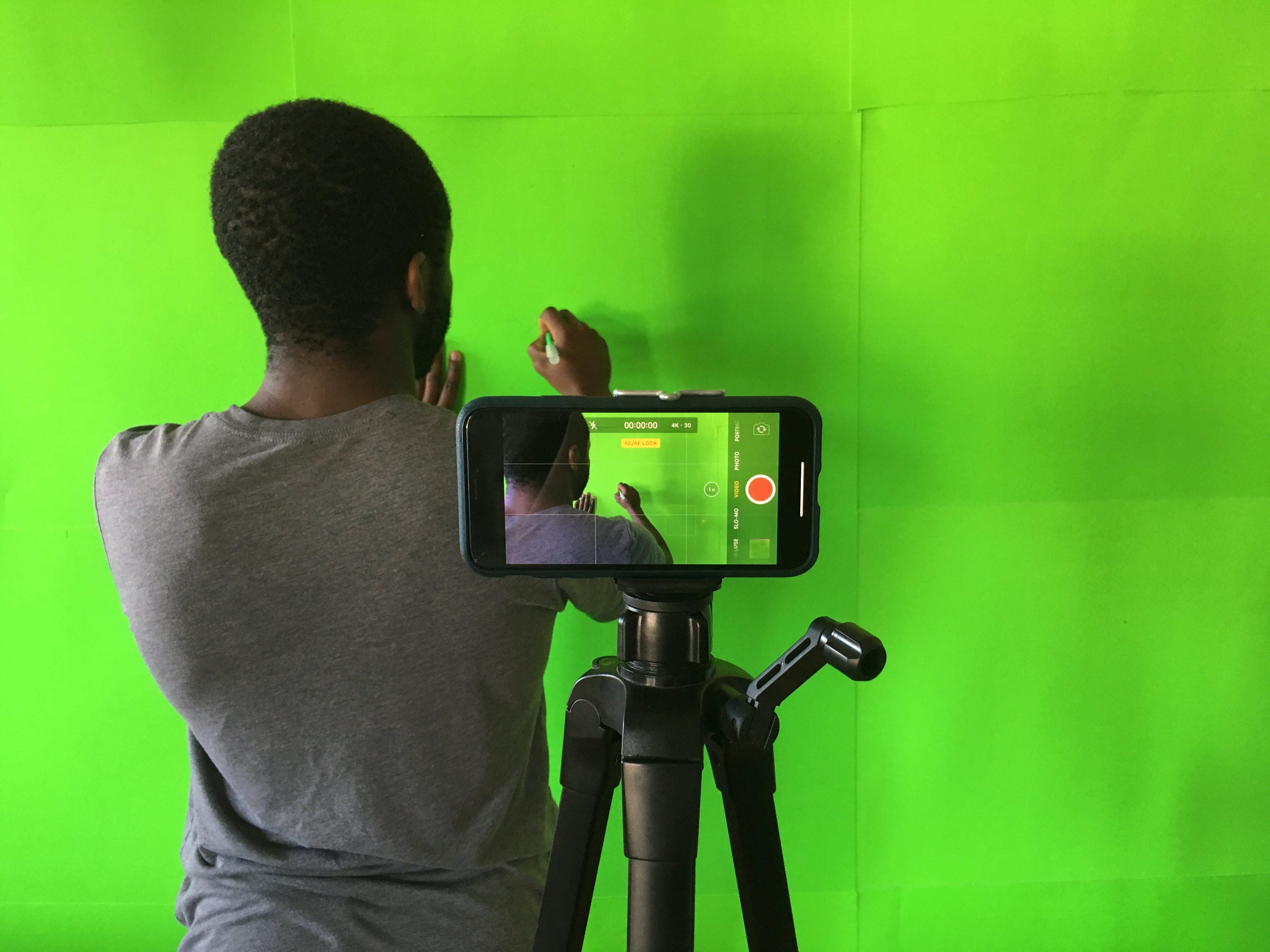 I’m terrible at managing my time properly, but my best attempt to do so is by writing down extensive to-do lists that encompass everything I have to do, no matter how large or small. I find crossing off tasks super motivating, and the more little things I cross off the more I wanna cross off the big ones.

But because I’m bad at keeping track of things in general, I just remake my to-do lists every few days.

It’s weird to call them side projects since everything I do online feels like a side project, but writing fake songs for movies is a ton of fun and as unnecessary as they are (especially since they’ve often been a detour from work) they’re such a silly and reusable conceit that I don’t see myself completely stopping any time soon.

I am the only person on the entire internet who is currently reading Jia Tolentino’s book Trick Mirror. (And Elmore Leonard’s The Switch.)

I can only really work to instrumental music so my “working” playlist is often just Jonny Greenwood & Trent Reznor film scores, but I also have so many great playlists I’ve made that just function as soundtracks that inspire scenes in things I’m writing and help me nail down the tone of a project. A lot of those have made their way into a playlist I listen to whenever I go for a walk, because it feels nice and weirdly empowering to walk and imagine scenes in my head. Here’s that walking playlist:

It’s very hard for me to motivate myself to do things! Even the things I want to do. Having jobs that force me to work on a deadline is always so nice because that deadline is a needed pressure, but when I’m writing for myself, not having a deadline means I’m way too lax about it. I need to find a way to give myself a mental deadline that can shame me into doing my own shit. 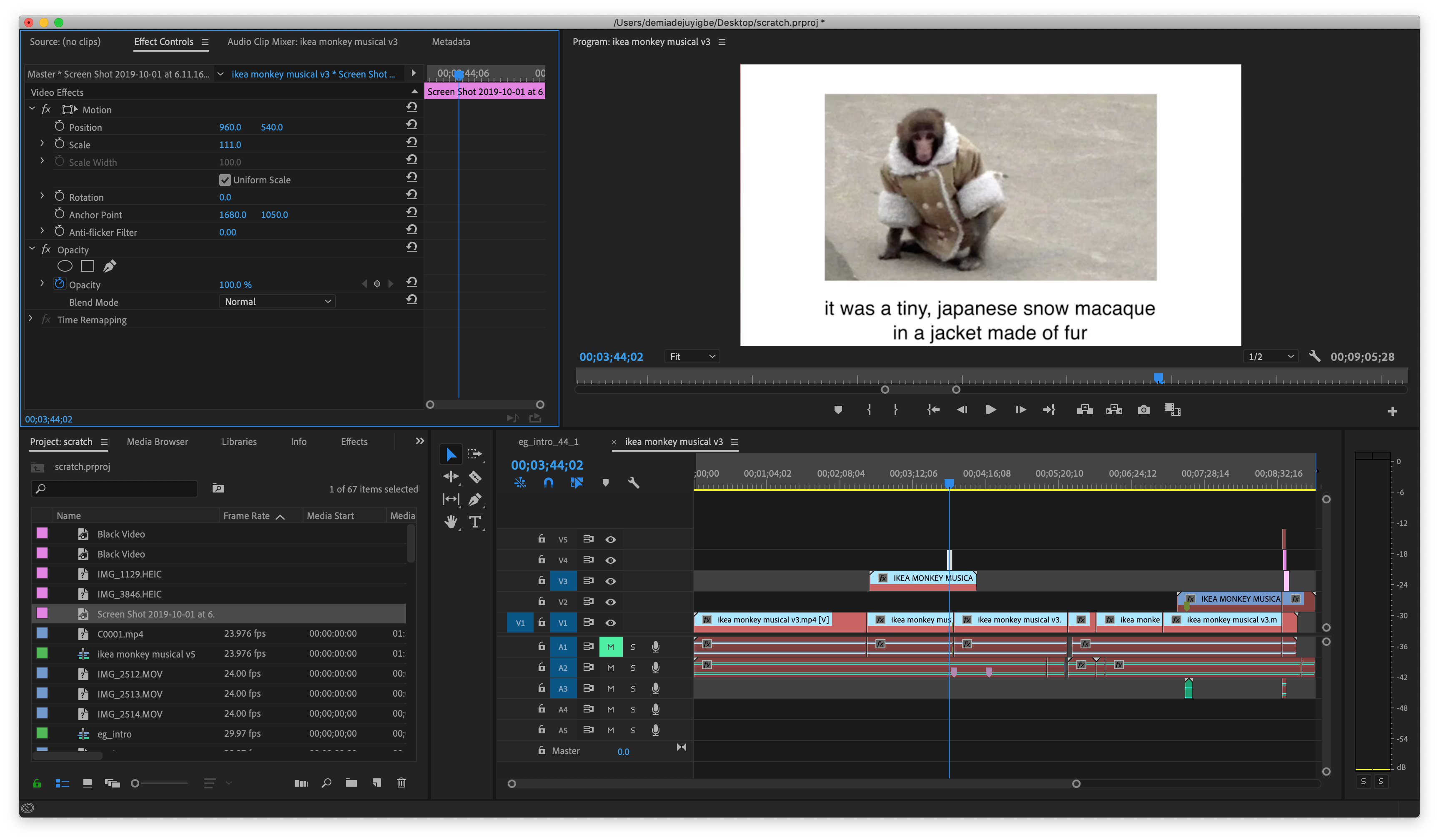