Google Stadia is a new, currently US-only streaming platform that delivers video games directly to customers’ lounge rooms. The one problem with streaming, though, is that it can require a pretty decent connection. And that’s what we’re here to test: How well does a Stadia perform across the various wireless and wired setups you’re likely to have at home?

Google claims that anyone with a 10Mbps connection can play Stadia at 720p, and playing at a 4K resolution (at 60 frames per second) only requires a 35Mbps connection. But does Stadia really work in those circumstances?

Now that I’ve spent some time testing out Stadia myself, I can say this: Google’s claims seem more or less accurate, but come with some caveats for the time being. To demonstrate Stadia’s potential issues in something approaching an organised test, I spent a little time clocking networking speeds as I used Stadia across many of the compatible devices I have at home. I tested using two of the more demanding games from Stadia’s launch lineup, Destiny 2 and Mortal Kombat 11, both with and without additional downloads running.

First, though, here’s a little bit about my setup. I get Fibre with 75 Mbps download speed, 75 Mbps upload speed. Instead of a crappy telco-provided router, I have a Netgear Orbi RBR50 mesh network, which supports 3×3 wireless-ac. In other words, that’s more than enough speed to let Stadia do its thing unimpeded. 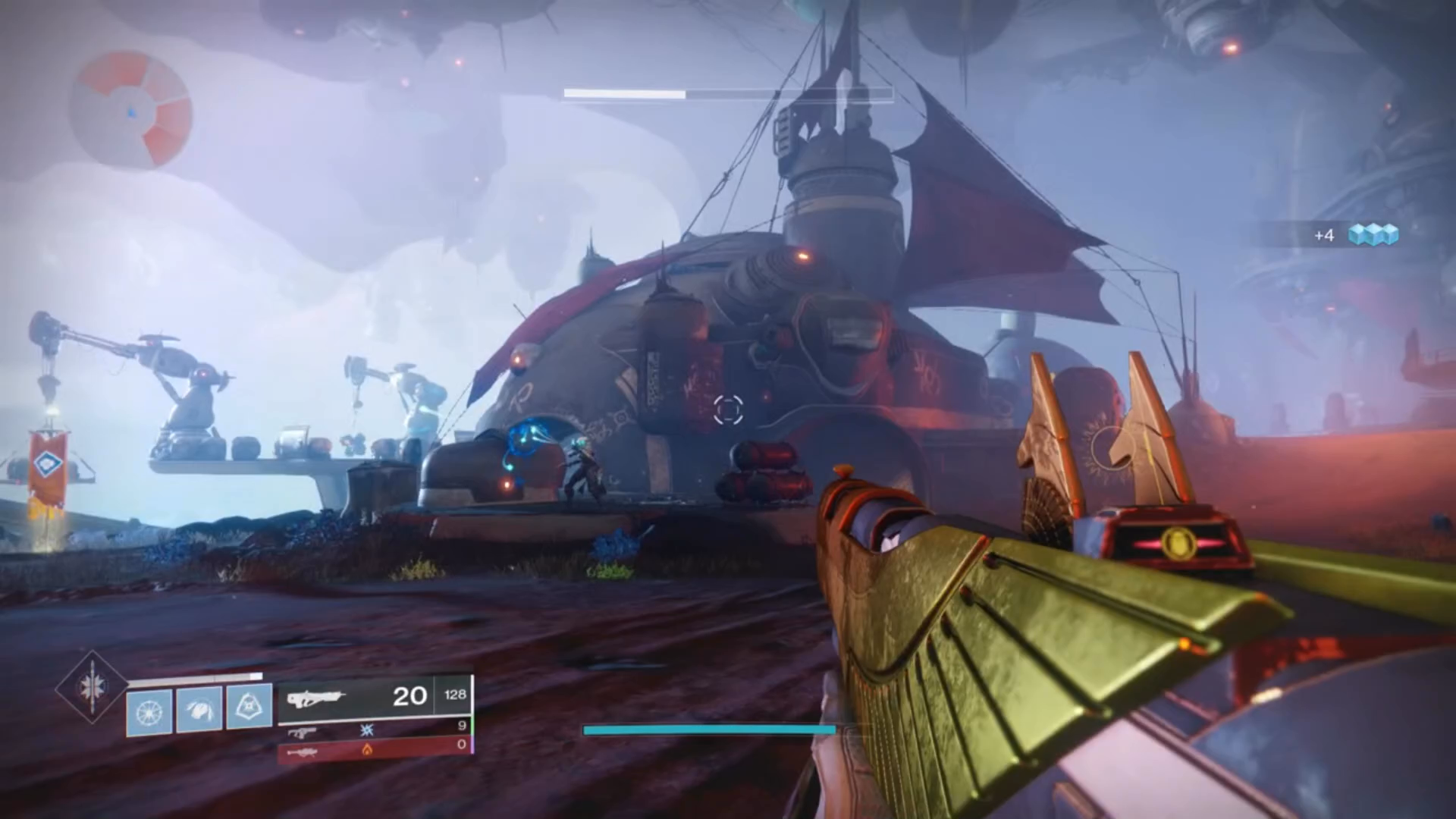 When you check your connection in Stadia, you’re shown one of four statuses.

According to Google, the ideal way to play Stadia is using the Chromecast Ultra that comes with the Stadia Founder’s Pack, and the Chromecast Ultra should be connected to your home network using an ethernet cable. Through most of my testing week, Playing on a hardwired Chromecast gave me an “excellent” rating, allowing me to play in 4K with no hitching. When I started streaming Netflix, Disney+, and YouTube on my nearby Windows desktop, however, my gaming experience started to get uneven.

Test 2: Destiny 2 while streaming Disney+ on a PC

Test 3: Destiny 2 while streaming Netflix on a PC

As you can see, the connection quality declined across both devices as soon as I put another semi-demanding activity on my network. That said, only the resolution dropped in my game; I didn’t experience any hitching or textural issues. I saw more issues in areas with other players, like when I was running around Destiny 2’s hub world. 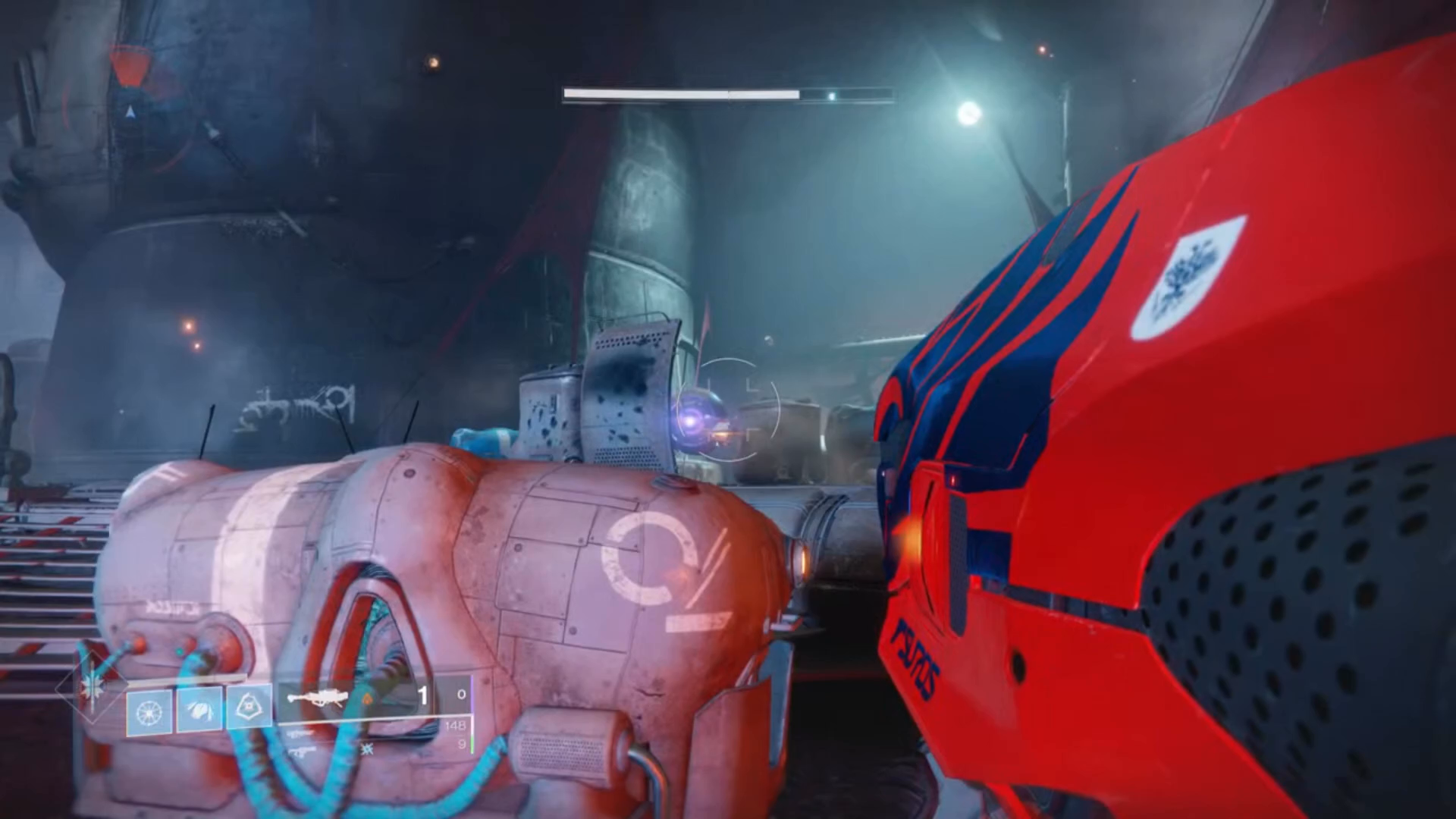 Using the Chromecast over wifi wasn’t as bad as I’d feared. With the Chromecast unplugged, but very close to my router—maybe 5 feet away—my game-only connection was stable and provided the same fidelity as when I downloaded files while playing over Ethernet. The connection generally stayed at “good,” which allowed for solid 1080p gameplay. Occasionally the system would bump me up to 4K, but that usually did more harm than good, creating blurry textures and unsyncing the audio.

My advice: If you don’t plug your Chromecast in, set your data usage to “balanced,” so Stadia won’t force you up to 4K whenever it conceivably can. You probably won’t be playing at top resolution, but your performance will be smoother. 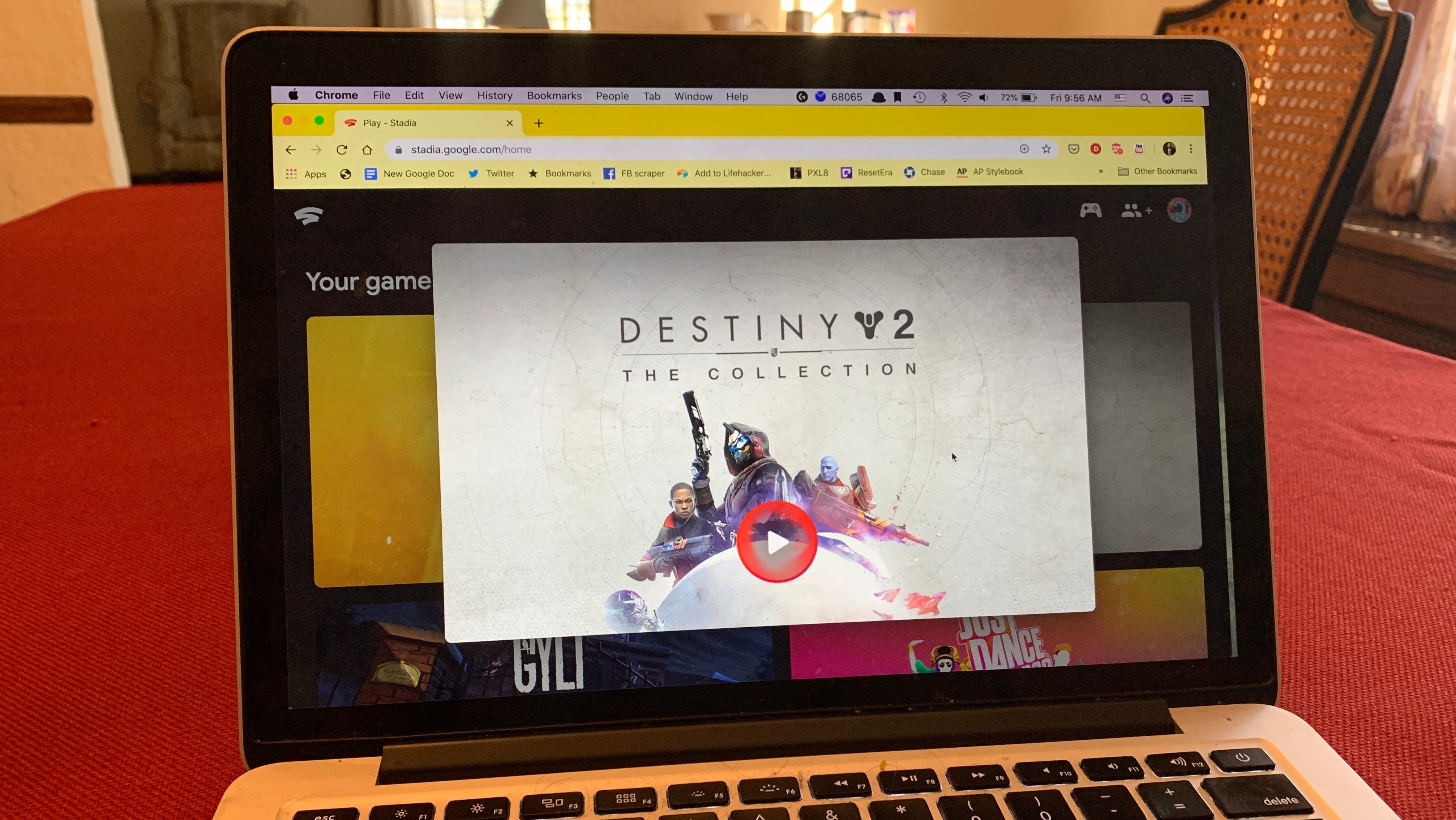 For the PC streaming test, I used multiple PCs: a custom-built Windows desktop and my 2013 Macbook Pro (pictured). The numbers below are from the Macbook Pro, taken near my router. However, my impressions below reflect my experience using it in many different rooms throughout my home, including on a separate floor from either one of my routers.

For the most part, playing on PC was very similar to playing on Chromecast. You can’t stream in 4K through the Stadia web app at launch, so a “good” 1080p connection is the best you’re going to get. I saw a few more cosmetic issues on PC, particularly over wifi—more pop-in and blurry textures on really detailed objects like my guns in Destiny 2. It’s a decent way to play, though I also understand why Google is pushing people towards using the Chromecast first.

More than anything, each issue reminded me that I was playing on a gaming PC that could easily outperform Stadia. That was the elephant in the room through most of this testing. The PS4, Xbox One, and most gaming PCs can perform more consistently at similar resolutions if you just install games locally, and then they don’t get tripped up by outside factors like Netflix. 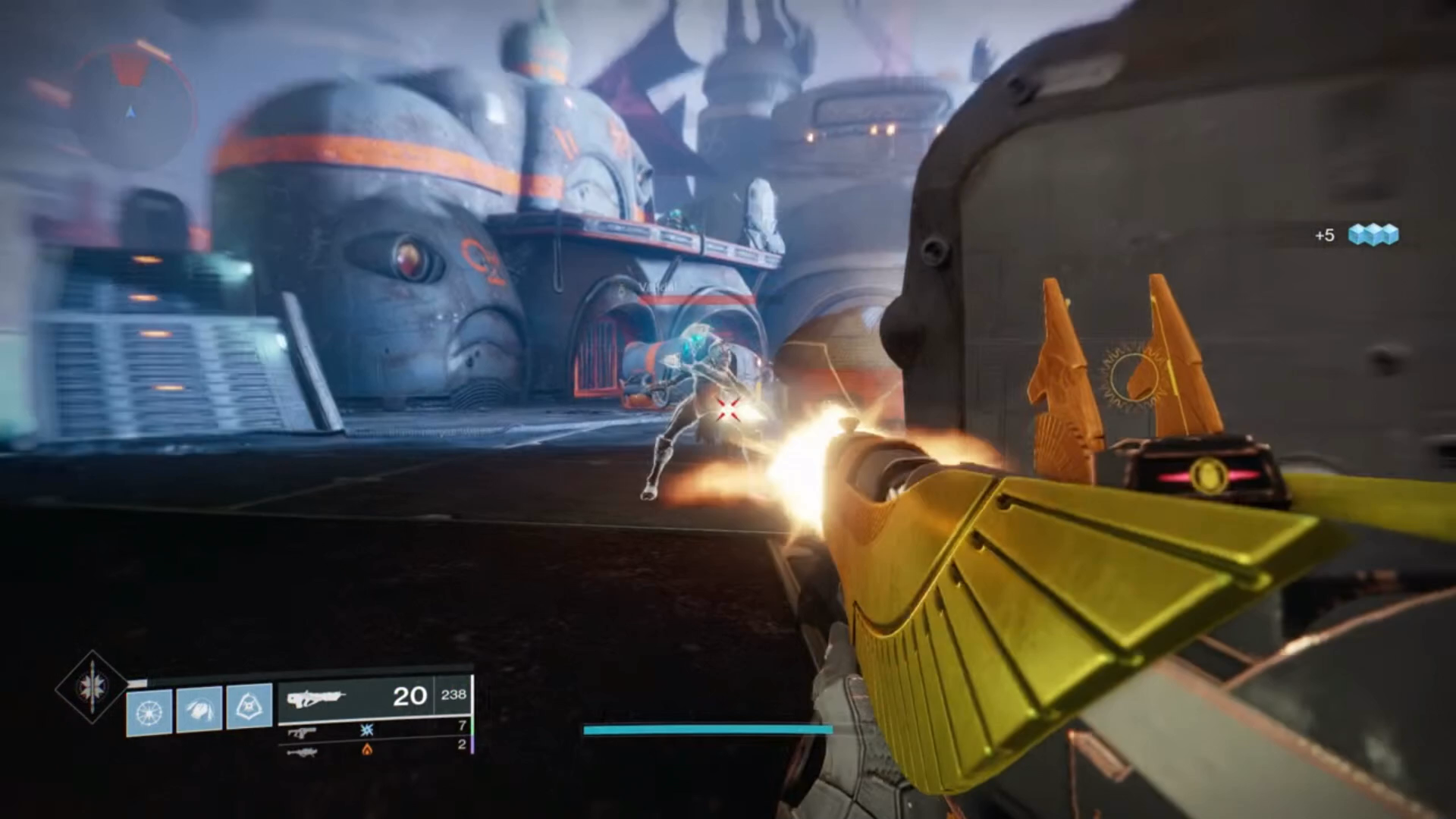 Realistically I was most impressed by how well Stadia worked on the Pixel 3a XL. On a 6″ display, both games looked incredibly sharp on the Pixel, so while it wasn’t pushing the absolute highest fidelity, it looked and felt like something you’d see from a console. Also, it ran very smooth with no technical issues at all. Obviously, I was playing at home over my network, so there was plenty of bandwidth to go around, but you could very well argue that Stadia is best experienced on a phone—at least from a technical standpoint.

Smartphone, burning through my data plan

Google Stadia does not allow you to play games over cellular data at launch. Despite this, I tried. Instead of the usual play button, Stadia showed me a “connection” button with three bars on it, which linked to a support page that was not available prior to launch.

And there you have it. Overall, Google Stadia works pretty well if you have the bandwidth to support it, though less consistently than a traditional game console or PC. Perhaps more importantly, the system can be finicky when you combine it with other online activity, which most people will because everyone’s online constantly—or because you live with your family, or with roommates, and they all want to do their things, too. And that’s even with a high-speed connection, too.

That may change in the long-term, but the fact is Stadia can’t compete with consoles or even a budget gaming PC at this point. While Stadia works, and with solid visuals to boot, the service wants to achieve the same performance and fidelity you could find on a PS4 or Xbox One. And those consoles can do it more consistently and without punching a hole in your data cap. Stadia clearly has potential, but until it’s more sturdy, the cloud is not the same as having hardware at home.