Google Stadia Post-Mortem: What We Learned From The U.S. Launch

Last week, Google launched Stadia in the U.S., a Chrome-based streaming platform for video games. It’s still very much in its infancy and half-functional in many ways. For example, you can only stream Stadia games on a handful of devices; there are settings available in some place on some apps, but not others; and, generally, it’s tricky to find your way around.

Editor’s note: Google Stadia is not currently available in Australia. A release date has yet to be announced.

If you’re diving into Stadia, or planning to within the next few months, here are some tips to help you get the most out of your Stadia experience.

Bring your laptop for the setup process (just in case)

The Founder’s Pack comes with a Stadia Pro membership, Stadia controller, and Chromecast Ultra—the latter being the only way you’ll be able to use Stadia with your TV at launch. The setup process is not exceedingly complicated, but you will be bouncing between different apps and devices to get things up and running. Before you get started, make sure to do the following:

Download Google Home (Android, iOS) and Google Stadia (Android, iOS) on your phone. (You can only play Stadia on a Pixel right now, but you can use any modern phone for the setup and purchasing.) You will use Home to set up the Chromecast and Stadia to set up the service.

In addition to the phone, I suggest keeping a laptop handy. While the service will direct you to the Stadia app for your initial setup, it’s worth noting that Google only allowed you to redeem codes on the web-based version of Stadia prior to launch. You can jump back and forth between your phone’s browser and the app, but I think it’s easier to just have the extra screen if you can.

Check to see if you have an Ethernet cable that can run from your router to your TV. Google suggests that you should use a wired connection with the Chromecast Ultra for the best streaming experience. Assuming your connection is strong enough, you can move forward without wiring up, but if you want to see the best version of the service you should, so check out the wiring situation. 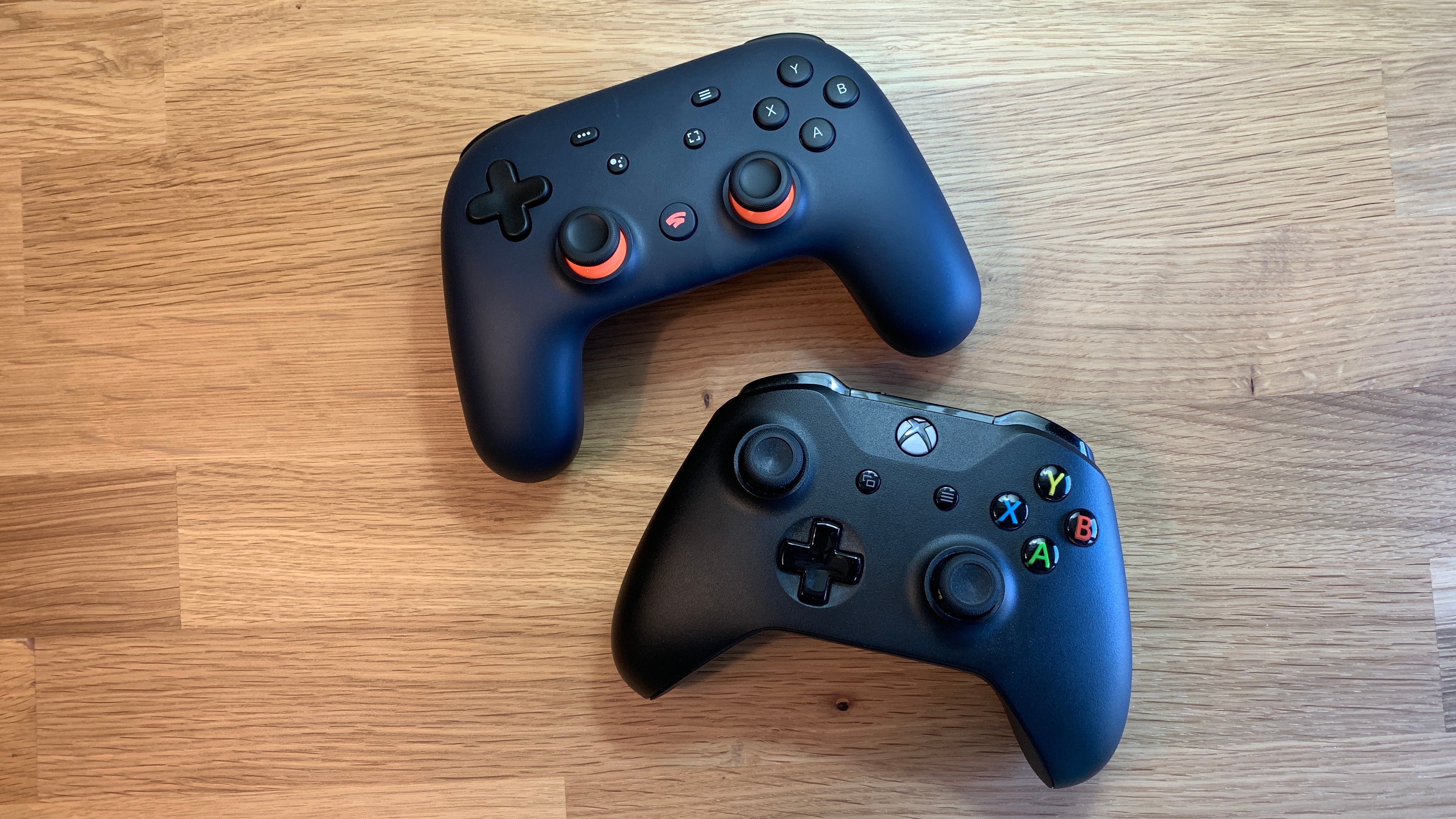 The controller situation for Stadia is a bit wonky at launch. The Stadia controller is the universal option: It’s the only controller that works with the Chromecast Ultra, and works with every other Stadia-compatible device. Unfortunately, for the time being, it only supports wireless play with Chromecast. When gaming on a phone, PC, or other device, you’ll need to use a wired USB-C connection.

For non-Chromecast devices, you can use also HID-compatible Bluetooth controllers with Stadia—including Xbox One and PS4 controllers—all of which work wirelessly.

Realistically, for the time being, you’ll want to have both a Stadia and non-Stadia controller for Stadia depending on what devices you plan to use (and where).

What about a mouse and keyboard?

You can play games on Stadia with a mouse and keyboard using your PC or phone. The key mapping varies from game to game, of course, but it helps to know that you can pull up the Stadia menu—the one you’d get if you hold down the Stadia button on the controller—by pressing Shift and Tab at the same time.

Pixel owners may want to do a little extra shopping 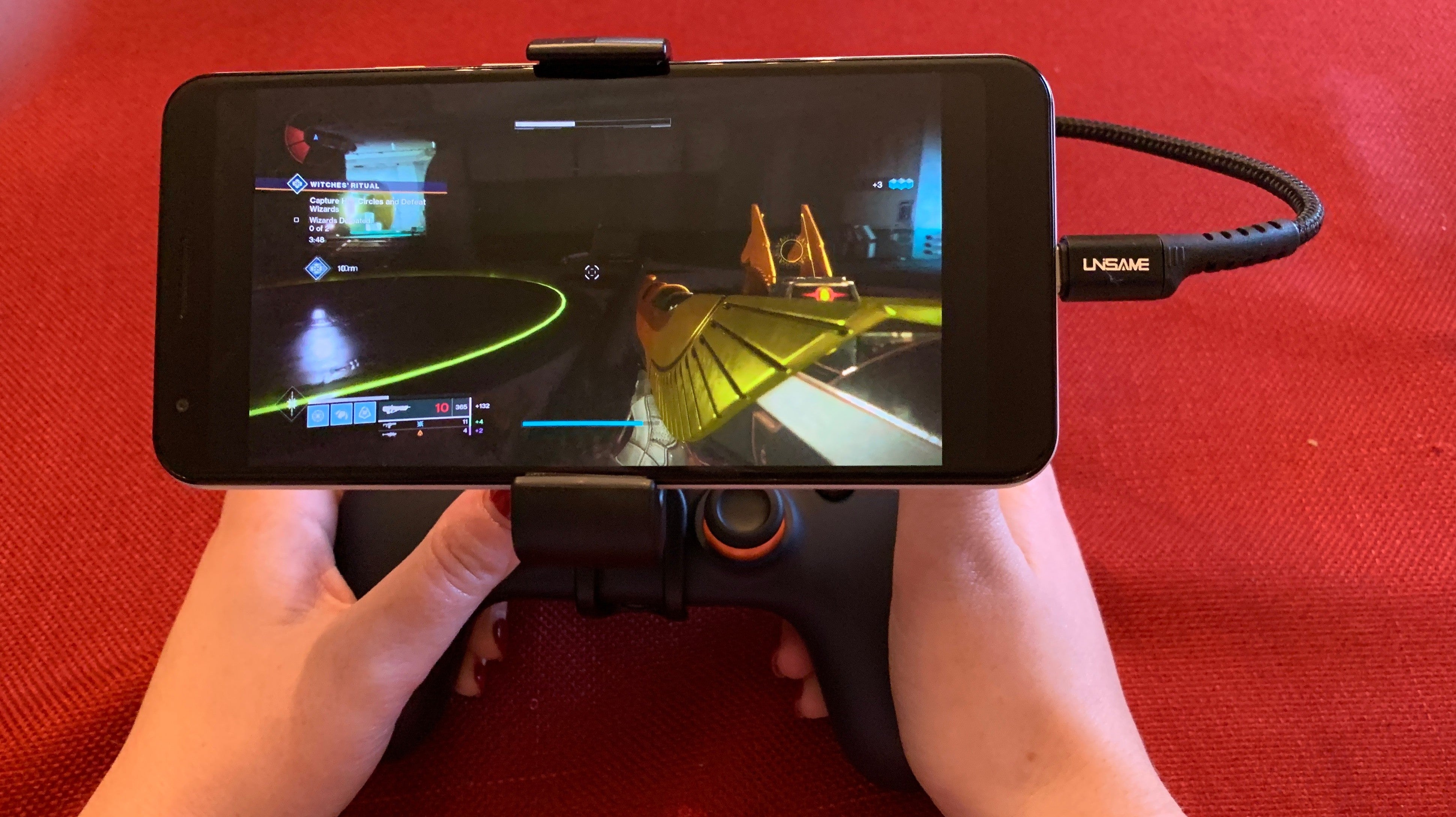 At launch, Stadia is only compatible with Google’s Pixel 2-, 3-, and 4-series phones, so most people won’t be playing on mobile. If you’re one of the few, though, there are a couple of extra pieces of gear I recommend picking up with your Founder’s Pack.

First, the Stadia controller does not support wireless at launch on any device besides the Chromecast, so you will need a male-to-male USB-C cable to plug it in. The Pixels come with them, but the cords are really long, so you might consider buying a shorter one—or a velcro cable tie.

To play comfortably, you’ll probably want to keep a portable kickstand or controller clip handy so you can watch your phone without holding it. Google announced ahead of launch that it plans to sell a controller holster, which it calls “the claw,” on the Google store. I have it, and it works quite well. That said, you can also use a kickstand if you’re sitting at a table.

Even after setup, you’ll want to hang onto your phone You don’t need the Stadia app to use the platform after the initial setup, but I recommend keeping your phone on you whenever you’re using Stadia, especially when you’re playing on your TV.

The Chromecast version of Stadia is meant for playing games. That’s it. To buy games or access Stadia’s settings, you’ll need to use the Stadia app. You can also check some settings on the Stadia web app, though some options, including the very useful “Display” menu that lets you shift your game from one device to another, are only available through the phone. That will likely change in time, but the phone app is the glue that holds the platform together for now.

Don’t forget that you can switch your streaming between screens 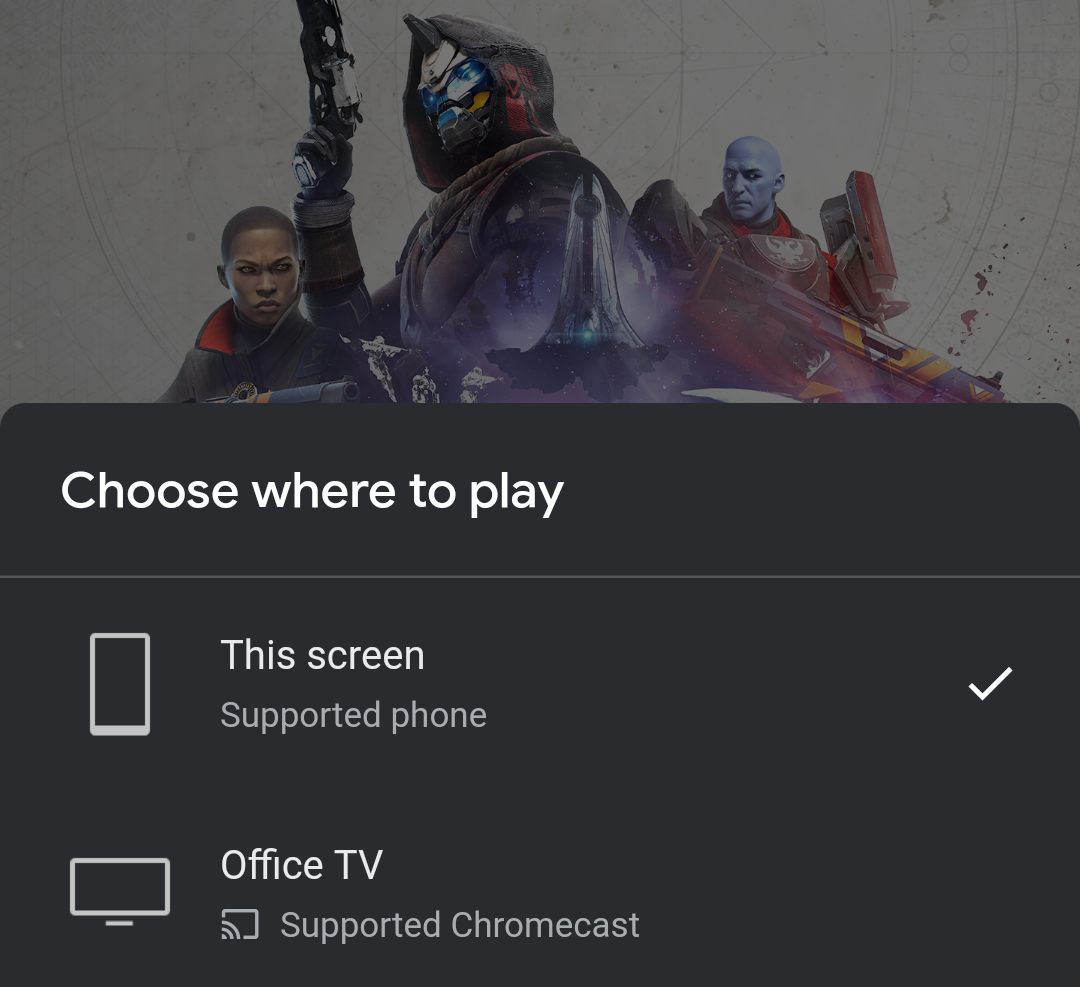 Speaking of the Display setting, let’s talk about switching your game from one console to another on the fly. Prior to launch, when you select a game from your library in the Stadia app your phone, there’s a drop-down menu beneath the play symbol that lets you choose where you’d like the game to start.

If you are playing a game on a computer or tablet, you can shift your gameplay from that device to your phone or Chromecast using the Stadia app. If you want to shift gameplay from any device to a web-based Stadia window, you can simply open the window and press play.

Just like any other time you launch a game, it normally takes Stadia 10 seconds or so to boot up, so you should pause or find a relatively quiet place to switch devices. If you try to move from your phone to your TV during a Destiny 2 mission, you will probably die. Don’t be that guy.

Keep your data usage under control 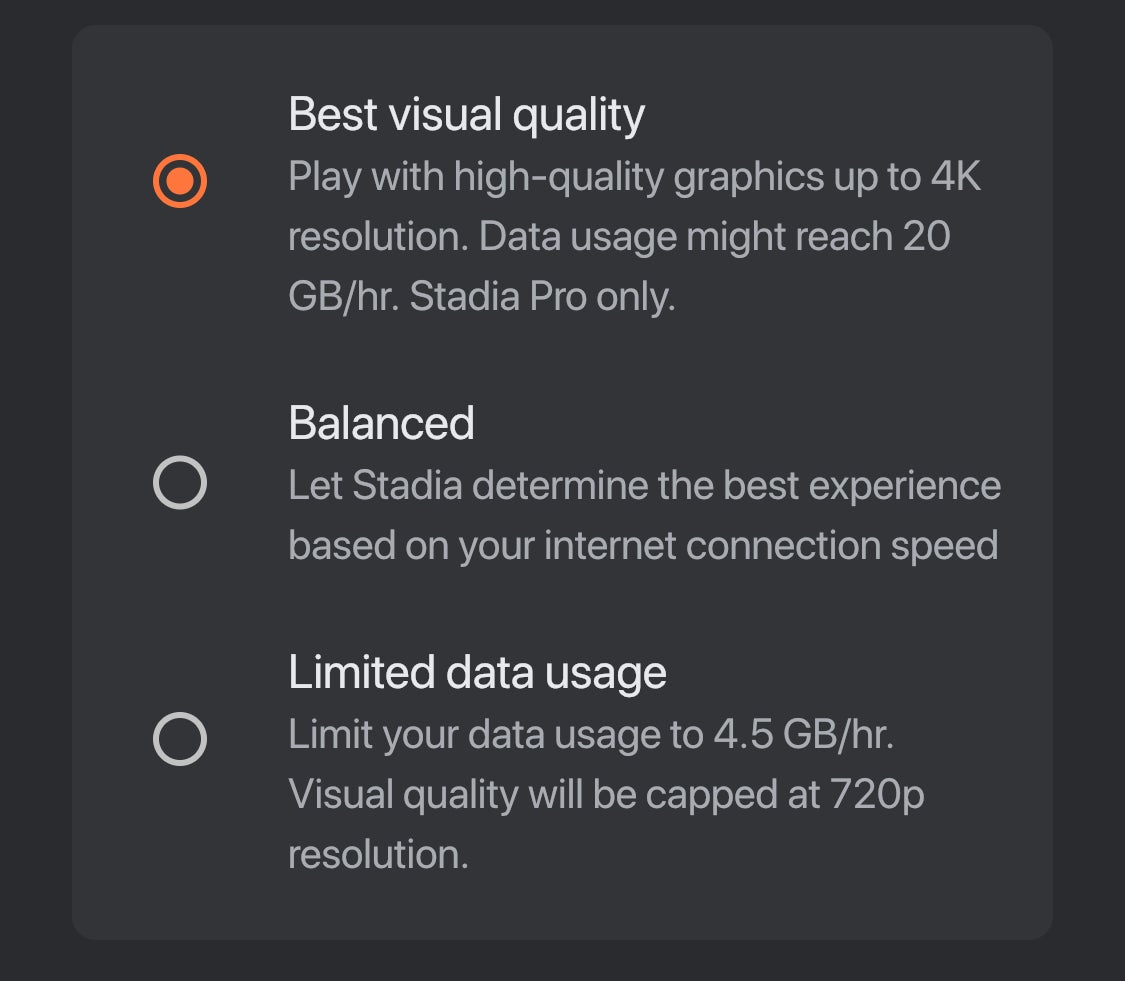 Stadia can be a dangerous proposition if you have a data cap on your home internet. According to Google, streaming games in 4K—which you can only do via the Chromecast at launch—can eat up as much as 20GB per hour. Even at 720p, Stadia uses at least 4.5GB per hour, so you can easily go up and over your limits if you aren’t careful.

Luckily, there is a way to put a lid on your data stream. If you go to the “Data Usage and Performance” menu in Stadia’s settings, you can toggle between unregulated “Best Visual Quality” streaming, “Balanced” data consumption that scales based on your connection, and “Limited Data Usage” that drops your resolution to 720p and caps your data at the aforementioned 4.5GB per hour. As you move from platform to platform and network to network, make sure you’re adjusting this setting accordingly.

Prior to launch, this menu was only available through the phone app, though it is present on the web settings menu—so it will likely be available there, soon.

Do developers really need to know who your friends are? 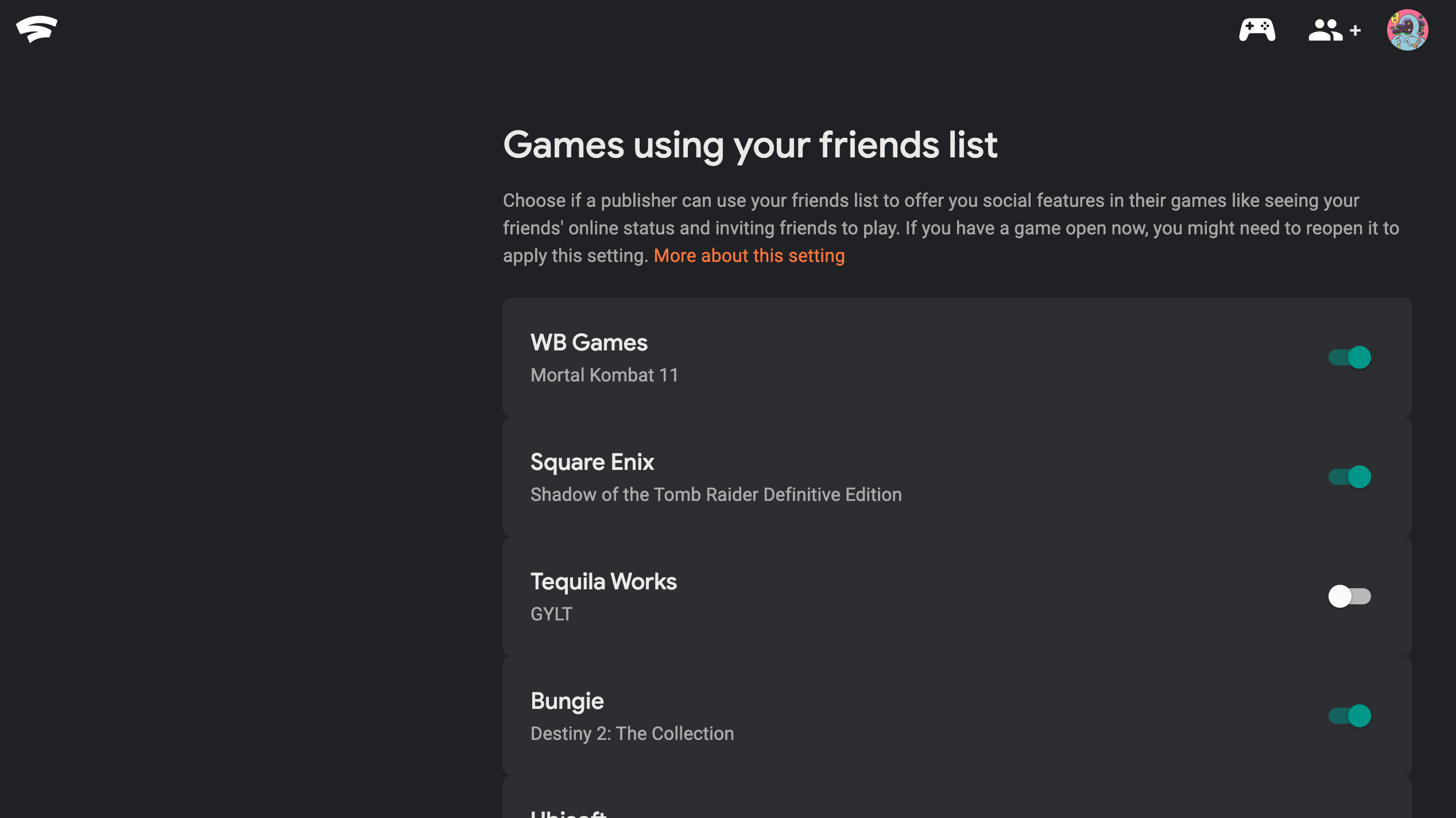 If you go into the Friends & Privacy menu, where you can control who gets to see when you’re online and who can invite you to games, there’s a section called “Games Using Your Friends List.”

This section allows you to choose what games and developers can access your friends list for in-game features features. Knowing how aggressive companies can be in drawing data from any software, you may find yourself wanting to toggle these on and off as games rotate in and out of your life. If you like to play solo, you may want to turn them all off. 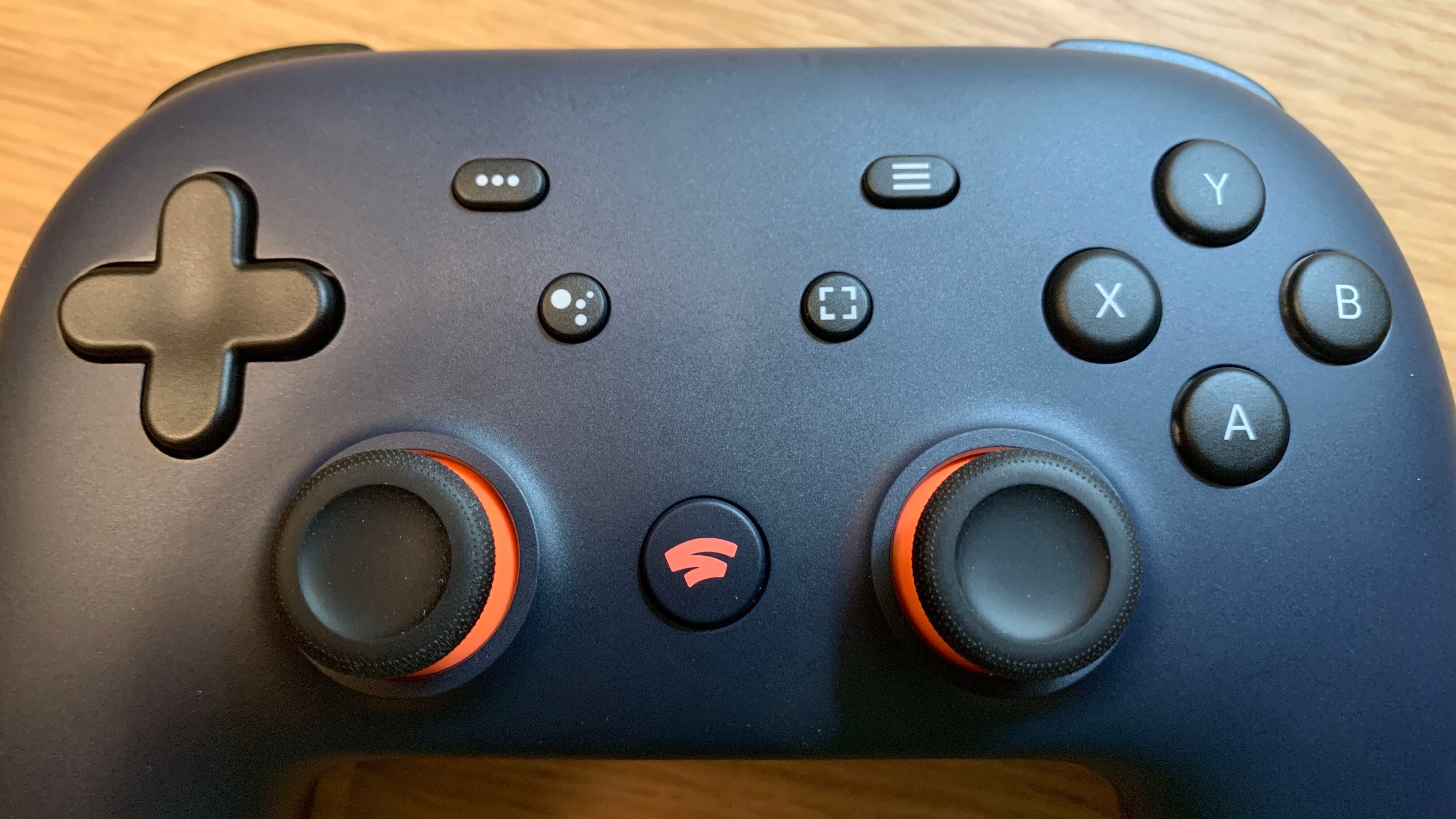 As you can see from most of the sections in this story, many of the features in Stadia don’t work yet. Here’s a list of things that you may try to do with Stadia, but won’t be able to off the bat.

Google assistant: You can ask Google Assistant on your phone to start a game in Stadia, but that’s it. The Stadia button on the controller doesn’t do anything, though Google said it would get some utility shortly after launch.

Sharing your screenshots and footage: You can capture screenshots and 30-second clips using the Stadia controller. You cannot share these recordings with anyone yet. And for all you streamers out there, I would not recommend running Stadia through a capture device—the resolution and framerate both take a big hit while you’re recording.

Family sharing: Parental controls will be available at launch through the Google Families program, but family groups will not be able to share content at launch. (This means parents will have to buy games for their kids on their kids’ accounts.)

Achievements: Like PlayStation, Xbox and Steam, Stadia will track and share achievements, system-level records of hitting certain milestones in games. The infrastructure for sharing them, however, was nowhere to be seen ahead of launch. Google said it is recording when users earn them so you will get them when the system goes live.

The “Buddy Pass”: If you bought a Founder’s Pack, there’s an icon in the top-left corner of the Stadia menu with a pair of tickets, which indicates where to go to get your Stadia “Buddy Pass”—a free three-month trial you can give to another person. Google said Buddy Passes won’t be available for “a couple of weeks.”