A Drag Racing Champion Explains The Key To Fast Driving 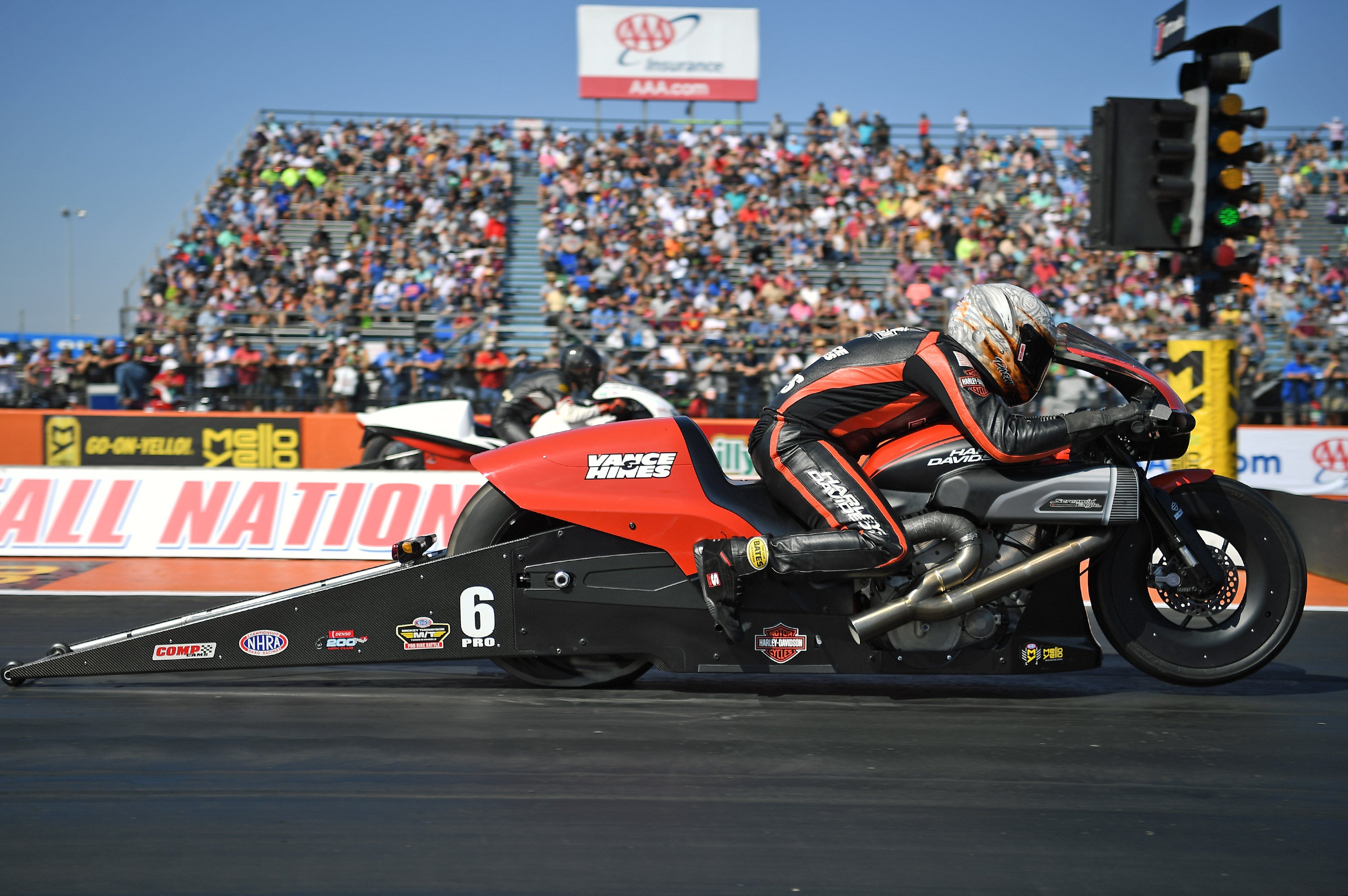 Vance & Hines Harley-Davidson FXDR rider Andrew Hines had a truly bizarre NHRA Pro Stock Motorcycle season this year, which wrapped up last weekend with his sixth championship. Having won seven races from the first 10 Pro Stock race outings this season, he went into the series’ playoff segment, dubbed the “Countdown to the Championship” as the easy favourite. Then the stumbles started to pile up.

Hines only managed to win one additional trophy from the six countdown race events between September and mid-November. Then, the unthinkable. Hines red-lighted his first round matchup of the finale round in Southern California last weekend against rookie Jianna Salinas.

Salinas went on to take her first championship win after defeating the other title contenders, Matt Smith and Jerry Savoie, as they both suffered mechanical issues. In the end, it was Salinas’ good fortune that paved the way for another Hines title. If either Smith or Savoie had won the Auto Club season-ender, they’d have clinched the title.

Considering he went winless in 2018, this was an incredible return to form for the H-D champion. 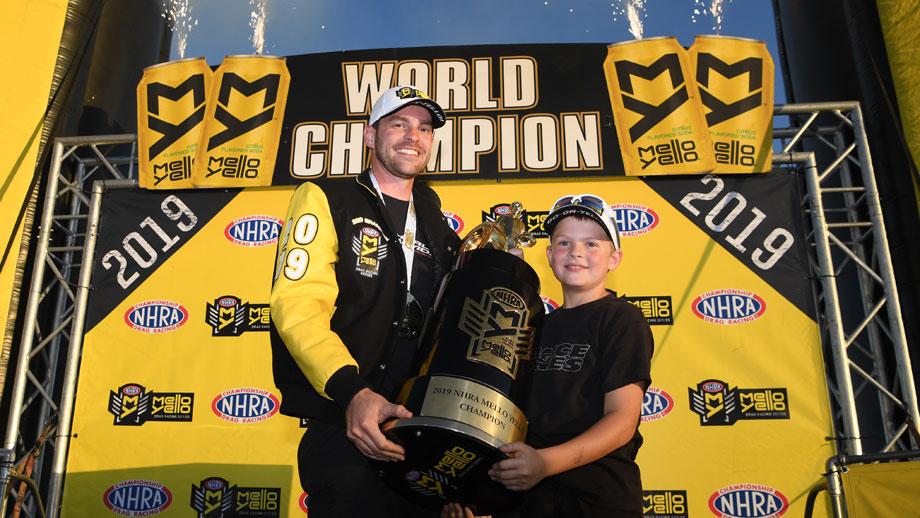 That anyone is willing to sit on top of a 390-horsepower 160 cubic-inch V-twin as it rockets down the quarter mile in seven-ish seconds a razors edge from 200 miles per hour (320 km/h) has always seemed preposterous to me. At least in a funny car you’ve got a cage around you. What possesses a rider to keep coming back? Surely there is more to a fast run than just pointing and squeezing the throttle. So I got on the phone with one of the most successful drag race riders of all time to get a few answers. 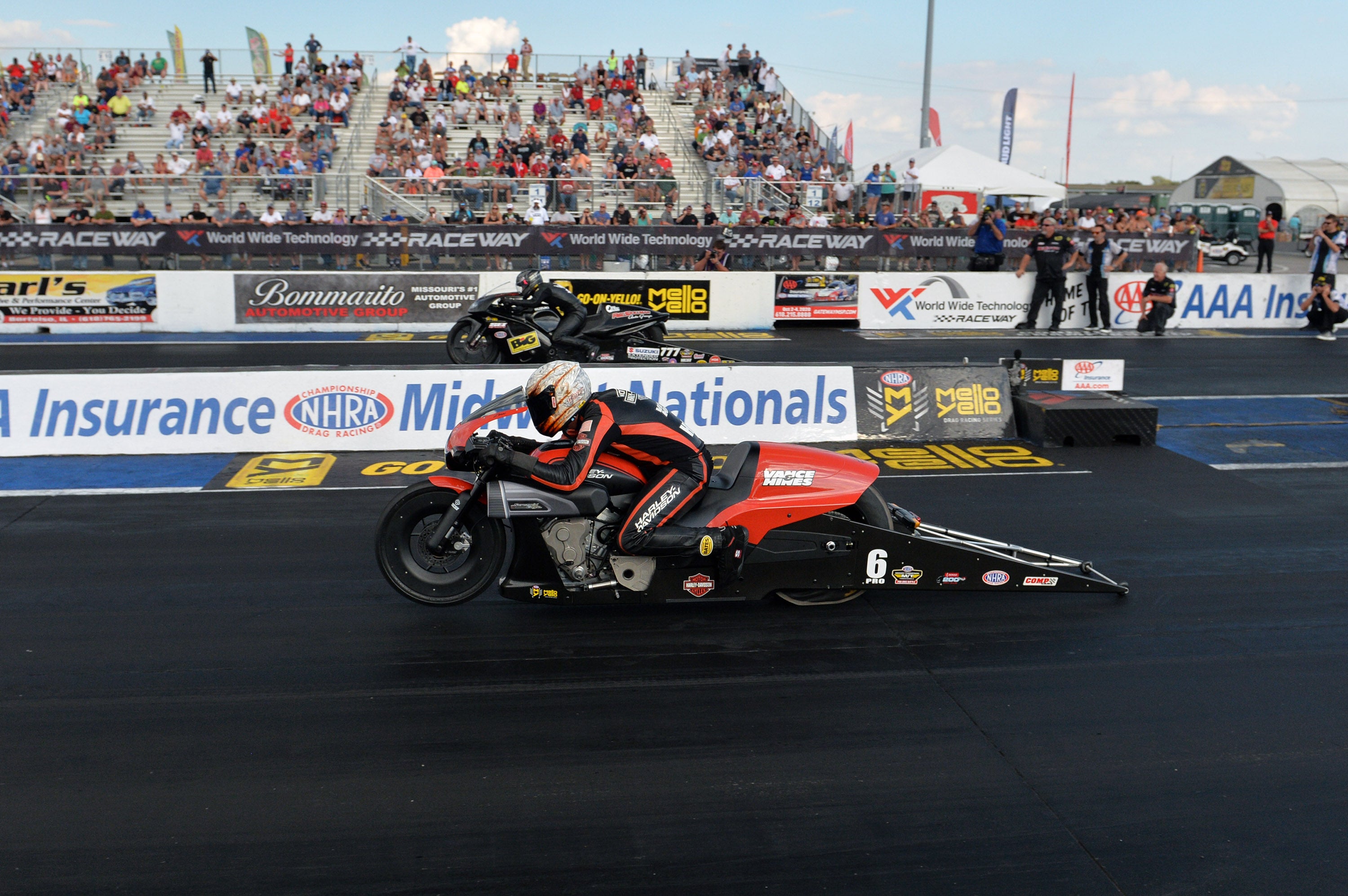 Credit to Mr. Hines for giving me about 45 minutes of his time in a very busy schedule. He provided incredibly comprehensive responses to my occasionally overly-simplistic questions. I was perfectly happy to sit back and soak up the wealth of information that flowed through my iTelephone’s receiver. I asked even more questions than are recorded here, but the ones pertinent to the conversation are presented below. I enjoyed the conversation thoroughly, and I hope you do, too.

Bradley Brownell: A proper run is over in a shade under seven seconds. What are a few of the things that can contribute to a good run, or what do you have to do to avoid a bad run?

Andrew Hines: It’s really about traction management. How quick can you get to 60 foot (20 metres). That kind of makes or breaks the run. We’re all running relatively the same speed at the finish line, within a mile an hour or so. You’re not making up much ground from 660 feet (200 metres) to 1320 (400 metres). It’s all about how good you can get that first 1/8th mile down.

Basically with the wheelie bar we’re trying to control how much the tire spins up in the first five feet (1.5 metres). So if you run a lower wheelie bar, the tire will spin up a little bit faster, and a higher bar will spin up the tire a little slower. On a hotter track you want to spin a little slower so you don’t have too much wheel speed at about 10 feet (3 metres).

Ideally if I could hit a button at about 30 feet (9 metres) out and they’d pop off the back and I wouldn’t have to carry them down the race track, I would. They’re there just a very small tuning element for the first few feet, but they’re make-or-break. That’s what allows us to 60-foot (18 metre) so hard. It just plants that 10-inch-wide tire. It’s traction management. 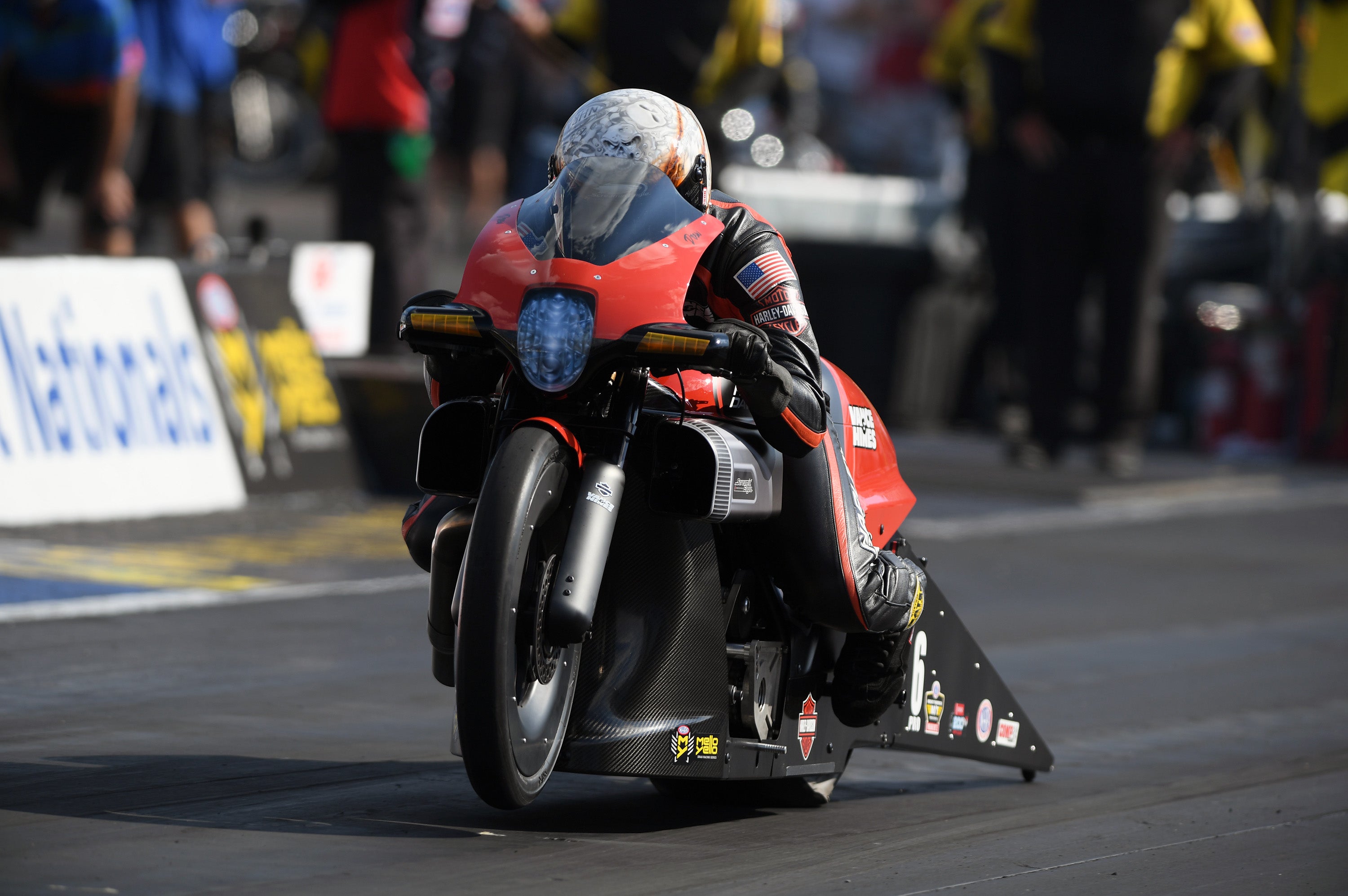 BB: That’s just in the first 60 feet?! There’s a lot to think about in getting one of these bikes properly set up for a run. How about that big rear slick? Surely that can’t be very easy to manage.

AH: It’s definitely not very forgiving on trying to manoeuvre it down the race track. You know, it wants to stay real flat with the race track, so you can’t road race it like you would on a street bike. It’s kind of a point and shoot deal. We actually have a guy on the starting line who will line us up. He’ll stand anywhere from 60 to 70 feet (18-21 metres) behind us, and he kind of points us down the track like a dart.

For the first, say 100-150 feet (30-46 metres), you’re just kind of along for the ride. You can start correcting it, but it takes a long time for the bike to respond in that early part of the racetrack. Because it’s pulling about 3.2 Gs for the first second and a half. It’s up on the wheelie bar, and it’s really hard to manoeuvre. At that point it’s all body positioning and weight bias left-to-right. It doesn’t make quick turns, it makes long arcs. 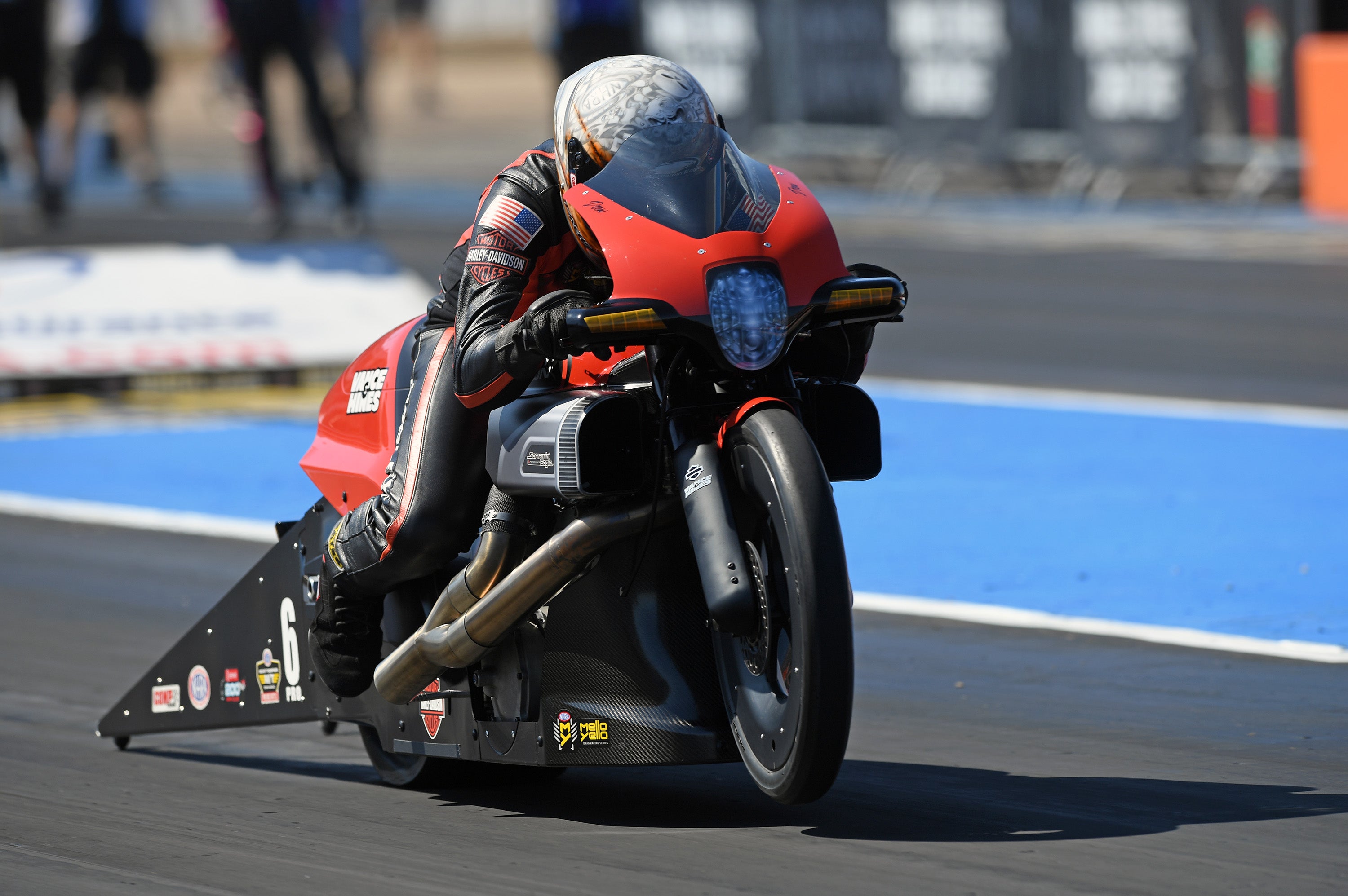 BB: You’ve got a 5-speed gearbox in your bike, so you’re shifting from first through fifth in that seven-second window, too. How does that work?

AH: On the starting line I hold the throttle wide open at about 6,000 RPM. It has a low-launch rev-limiter. So the clutch is in, throttle wide open. Throw the clutch away. Then a shift light comes on at a predetermined RPM in each gear. You’ll have the faster acceleration rate in the early gears, so you have to lead that a little bit more, because by the time you see the light, react to it, and the bike shifts, it takes a little more RPM.

I shift into fifth at about 162 miles per hour (261 km/h) or so. It’s trying to do everything it can to kick you off the back, so you’re tryin’ to stay attached to the motorcycle.

The transmission is probably the most beat up piece of the equation. It takes a lot of abuse shifting through those five gears with no power interruption. It’s wide open throttle and you’re shifting from one gear to the next with very minimal clutch slip. Each transmission is completely thrown away after about 40 runs. The clutch is serviced between each run. 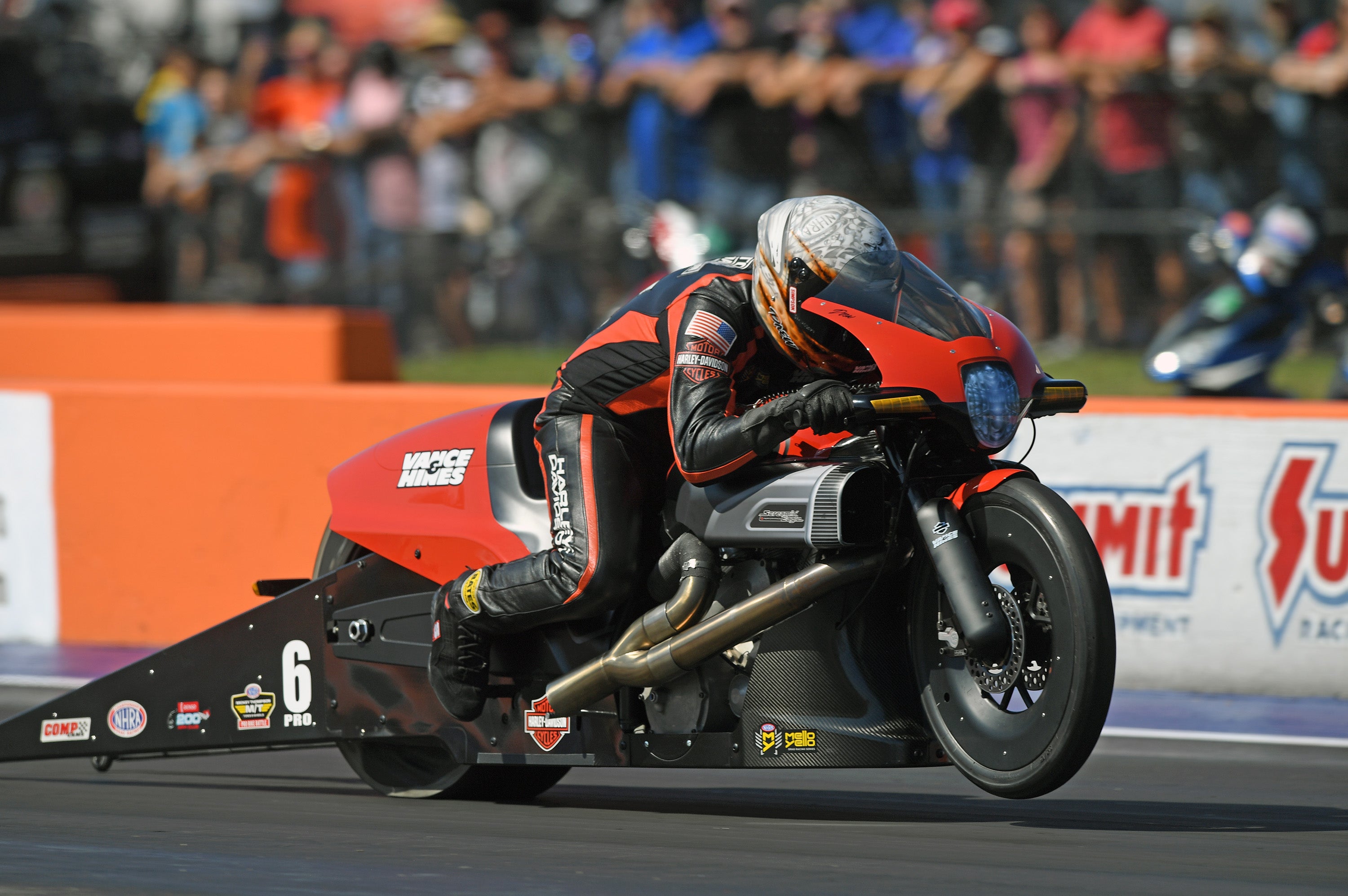 BB: I’m intrigued by the aerodynamics of your race bike. How can any aero engineer possibly correct for any kind of aerodynamic turbulence a stray elbow or knee can cause at nearly-200 mph?

AH: Down track with all the wind pressure on your helmet, the important thing is neck strength. It’s not bad if you’re doing two or three rounds a day. But you can go four rounds on Sunday and come Monday my neck muscles can get pretty sore just battling that wind. You know, it’s only seven seconds at a time, but it’s enough to get you sore, and you could injure yourself pretty good.

My helmet does have few aerodynamic wickers on it to shed the air off a little cleaner so you don’t get as much buffeting. My leathers are custom made to fit real tight to me. They’re made to fit us in a tucked position.

And then we also have a two-step seat. We have a low seat that we launch in to keep the weight bias farther forward so it doesn’t want to wheelie as much, and have less dependency on the wheelie bars.

In the middle of second gear or early third gear you move to the second seat which is further back. It allows us to get our back parallel, tuck our knees a little tighter to the bike. We try to ‘crawl underneath the paint’ as we say in the Pro-Stock class.

BB: Speaking of aero, you’ve got a huge intake scoop on the side of the bike. How do you balance the power-adder effect versus the aerodynamic drag it causes?

AH: Obviously the bike’s intake scoops are pushing a lot more wind, but we’re also increasing the intake pressure by 3/4 of a PSI positive intake pressure at 200 mph (320 km/h). To actually have positive pressure on the airbox through the last part of the run is big for making power. They’re a little bit of a tuning element, too. They can act like a long intake runner with a resonant frequency to add a little bit to the engine output that way, too.

BB: I’ve read that you haven’t quite hit the 200 mark yet. What are some factors that could get you over that number, or what has prevented you from hitting it thus far?

It’s usually just tune-up related. Or depends upon how straight it’s going in high gear. Obviously the quickest way is a straight line, and if you’re moving over a couple feet over that last 1/8th mile, that could be the difference.

The truly fast runs that maybe don’t look that great from the grandstands are the ones that will put up the big times. It goes nice and straight from the starting line to the finish line, and the rider has to do very little. But when we’re hangin’ off the side of it, fighting it all the way down the race track, those are the ones that look cool, but they don’t go the quickest.

BB: So that’s the mechanics of getting down to the end of the track in quick time, but how does anyone prepare emotionally for such a challenge? It’s a violent few seconds, and you end up practically half a county away from where you started. What exactly goes through a person’s head in all of that?

AH: I try not to have too much emotion going up there on the starting line. I try to keep a level head so I can race as best I can. There’s a big difference between a good racer and a good rider. You gotta be a good rider after you let go of the clutch, but you have to be a good racer as you’re rolling up to the staging lanes and getting ready for that run.

It’s the adrenaline rush that keeps me coming back. After you make the pass, you don’t really feel it, it’s such a delayed response. After I roll through the shutdown area and I sit there for 10 seconds or so, then I take my helmet off and kind of collect my thoughts. That’s when I start getting the shakes because the adrenaline is kicking in.

You think ‘What the heck did I just do?’, ya know? Holding on to these handle bars going 200 miles an hour, doing the quarter mile in seven seconds, it’s a pretty eventful ride.”

So that’s all of the speed secrets to going quickly on an NHRA Pro Stock Motorcycle Harley-Davidson FXDR. Surely now any one of us could go out and do the same, reliably, run after run, for a 17-year professional career. Fuckin’ of course not. This guy has racing in his blood. He followed his brother and father into this two-wheeled motorsport life, and has spent his entire life at the track. None of us mere mortals even stand a chance.

I’d sure like to give it a shot though. Just maybe on a slower bike. 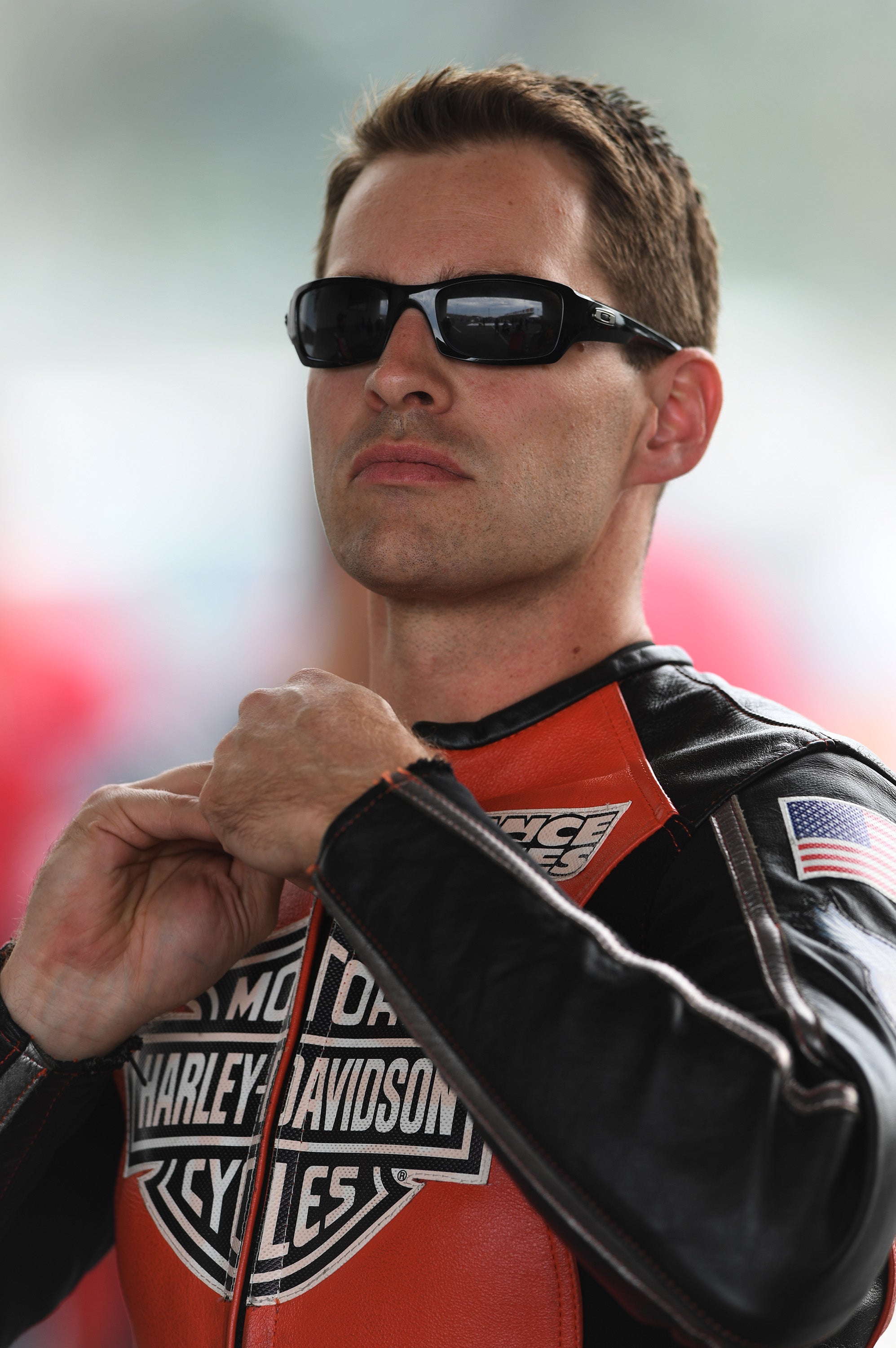