Turkey has long been a popular tourist destination for Australians, whether it’s to visit Gallipoli for ANZAC Day celebrations or to experience Istanbul, considered to be an impressive blend of European and Ottoman architecture. But the region is facing some instability at the moment and the Department of Foreign Affairs (DFAT) has issued a travel warning to Australians wanting to head there. Here’s what you need to know.

What has DFAT said?

DFAT’s Smartraveller service has issued an alert on travelling to Turkey with minimum alert being “high degree of caution”. Travellers planning to visit regions that border with Syria, Iraq, Iran, Armenia and Georgia are urged to reconsider their travel plans while the city of Diyarbakır, considered by some to be the unofficial capital of Northern Kurdistan, and the areas directly near the Syrian border are cautioned with a “do not travel”.

The warning’s been live since 24 September but it’s still current up until 15 October when this article was published. 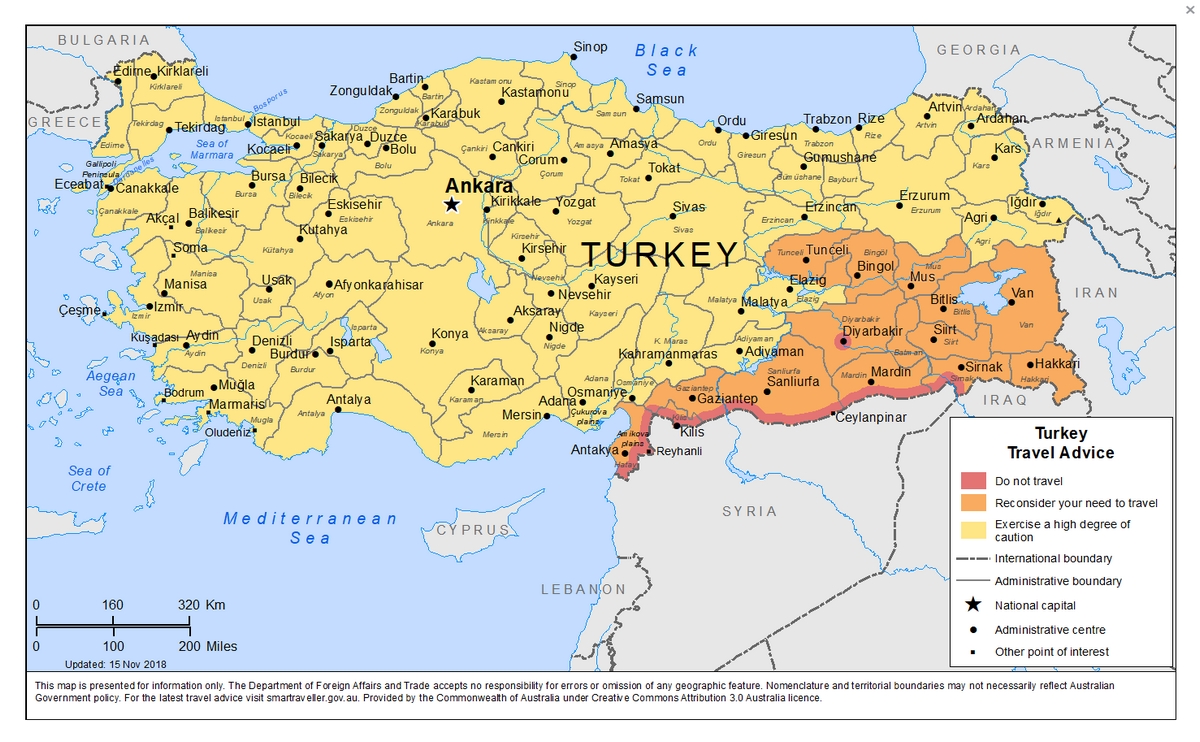 A map of the travel warnings across Turkey. Image: Smartraveller

Smartraveller points to the high threat of terrorist attacks and the risk of tourist kidnappings, even in major cities such as Istanbul and Ankara.

The political situation has been a bit turbulent in Turkey over the past few years with the re-election of controversial President Erdoğan stirring up protests in the country’s major cities in mid-2014. Two yeas later, a coup d’état was attempted and Erdoğan subsequently declared a state of emergency. That was eventually lifted in mid-2018 but things have yet to subside with debt crises and further allegations of corruption rearing their heads since then.

But recently, after US President Trump announced he was pulling US troops from Syria, President Erdoğan announced Turkey would head to northern Syria to push back the Kurdish militia group, People’s Protection Units (YPG), who had a huge part in the defeat of ISIS forces in Syria. Erdoğan had previously said the YPG had ties to another Kurdish separatist group, considered the Turkish government’s enemy, and he vowed to “vanquish” them from Turkish territory.

Kurdistan is not an officially recognised country but the Kurdish people have been fighting for a country to call their own after British and French forces drew arbitrary borders when they left the region after the fall of the Ottoman Empire in the early 19th Century. It’s estimated there are somewhere between 25 and 35 million Kurds living in the border areas of north-eastern Syria, south-western Turkey, northern Iraq, north-western Iran and south-western Armenia. The majority of them live within Turkey.

Should I still go?

Given DFAT has warned strongly against visiting the country at this stage and has limited power to help you should you get into a bad situation, the obvious answer to this question is no. If your travel plans are flexible, consider changing your flights and bookings to a later date but if it’s an urgent situation, a family situation or likewise, Smartraveller recommends ensuring your insurance covers you and avoiding the most affected areas, near the Syrian and Iraq border.

This week alone, people in Syria have been gassed and then bombed. After years of horror, the pictures of suffering children even got through to the American president's cold heart. If you feel the same way, here are some things you can do to help.