How To Ride An Escalator, According To Escalator Manufacturers

People shouldn’t walk on escalators. (It slows down the flow at rush hour.) According to a recent Canadian Broadcasting Corporation (CBC) report, all the walkers are breaking escalators faster. The Otis Elevator Company even says that walking on the escalator is a safety hazard. But that’s not what we’re here to talk about. We’re here because of a dumbfounding revelation from Otis. 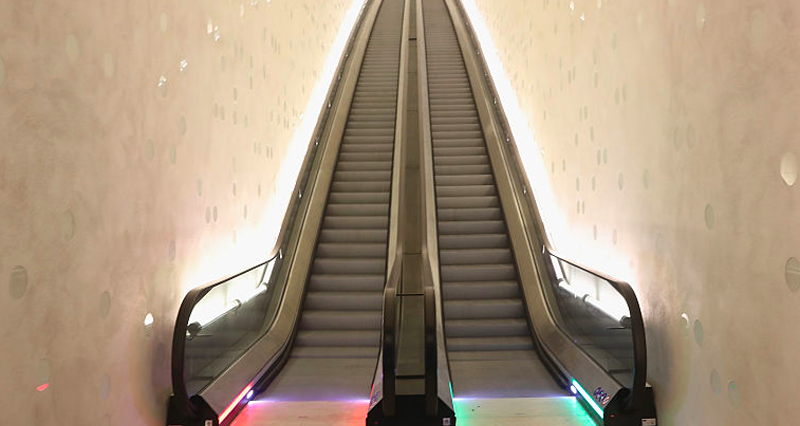 Why You Should Always Walk On Escalators

On Tuesday, The New York Times decided to reignite the age old debate of walking versus standing on escalators. And do you know what the paper concluded? "You shouldn't walk on escalators." This is a patently incorrect conclusion for at least four reasons.

According to the CBC:

Otis, a manufacturer of escalators (and the trademark owner of the word escalator) actually recommends users stand in the middle of the escalator with hands on both railings for maximum safety.﻿

When asked for comment, an Otis rep confirmed that the company discourages walking on the escalator, and that riders should “step on, hold on to the rail and stay alert.” The 22 safety recommendations listed on Otis’s website include “stand in the centre of the step and face forward,” but they do not mention double-fisting the handrails.

But just to be safe, we illustrated Otis’s utopian vision for a safely escalated world.

Here are some things the Otis safety page does explicitly advise:

There really is a small risk to escalator walking: As the CBC points out, in the U.S. about 10,000 people get injured on an escalator each year. And one Tokyo study blamed walking for a decent portion of Tokyo’s escalator injuries.

Much as I’d love to manipulate these stats to make everyone behave the way I’d like you to, it is obviously not particularly dangerous — just pointless — to walk up a normal escalator. But one injury firm connects the dots: Escalators can malfunction, so badly that people die. And when an escalator breaks, all these paranoid safety precautions can suddenly make a difference.

Life is about weighing risk, and the risk is pretty low that you’ll be the one to fall through a missing escalator step. But sometimes, someone does, and if you’re sprinting up the magical moving staircase every day, you are buying a few more lottery tickets for that particular prize. I’m not saying you should death-grip the handrail. But watch your step, yeah?

Stop Walking On The Escalator

Escalator walkers and escalator standers are forever locked in struggle—they are like toilet paper over-the-roll installers and under-the-roll installers, or GIF pronouncers, or one-spacers and two-spacers, only brought head to head every day in the malls, airports, offices, train exits, and sundry moving staircases of the world. And the real-world evidence, it seems, is on the side of the standers. Walkers are a bottleneck, and they’re slowing each other — and the standers — down.