How To Protect Your Privacy On Facebook’s New Dating Service

dinner and a movie and a facebookfacebookprivacysafetysocial

Gone are the days of poking people on Facebook that you wanted to poke in real life. Facebook officially debuted its new dating service in the U.S. yesterday, and that very sentence should cause privacy advocates a bit of alarm—especially since it was only a few days ago when the news hit that another security gaffe exposed the phone numbers of millions of Facebook accounts to the world.

While I doubt a hack will ever directly target your list of admirers and secret crushes, you should still think long and hard about your privacy if, or when, you decide to let Facebook be your new matchmaker. Your safety is important, and limiting what you share—and how you share it—is one of the best things you can do on any social network, let alone a dating service.

I’ve played around with Facebook Dating, and while the new service doesn’t have a ton of options you can adjust to manage how your data is used, you do have a few options.

To jump into the grand world of online dating—via Facebook—pull up its mobile app and tap on the hamburger icon in the lower- or upper-right corner. Look for “Dating,” identifiable by a little tagline and a big ol’ heart: 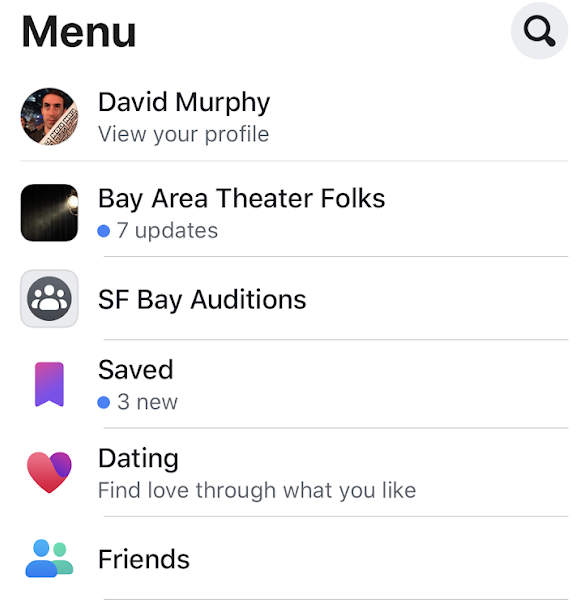 The next many screens should be pretty self-explanatory—setting up the Dating service isn’t that difficult to figure out—but I wanted to highlight a few points related to privacy.

Who can see that you’re Facebook-dating

Nobody will be able to see that you’re using Facebook Dating just by looking at your Facebook profile. And Dating won’t match you up with any of your Facebook friends—sorry, in advance, if you were planning to use the service to finally ask out your crush. 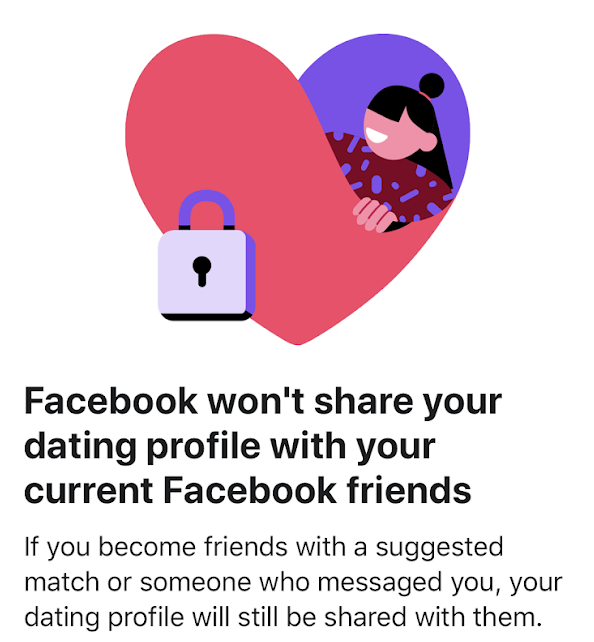 While you can’t get too granular with who might be able to find you on Facebook Dating—no auto-blocking people from your high school or college, if you’re stick of the same ol’ pool of suitors, for example—you can at least slightly restrict who you’ll see as potential matches. Additionally, you can block specific users from being able to find you. 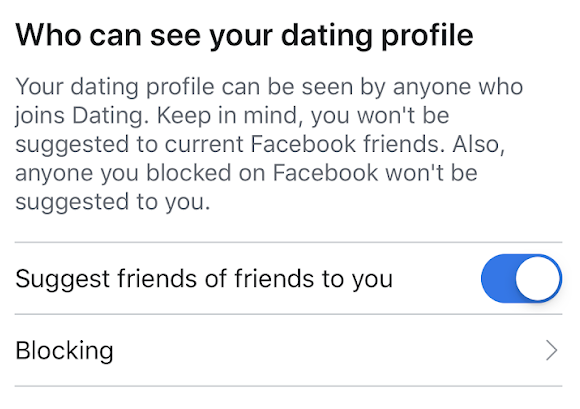 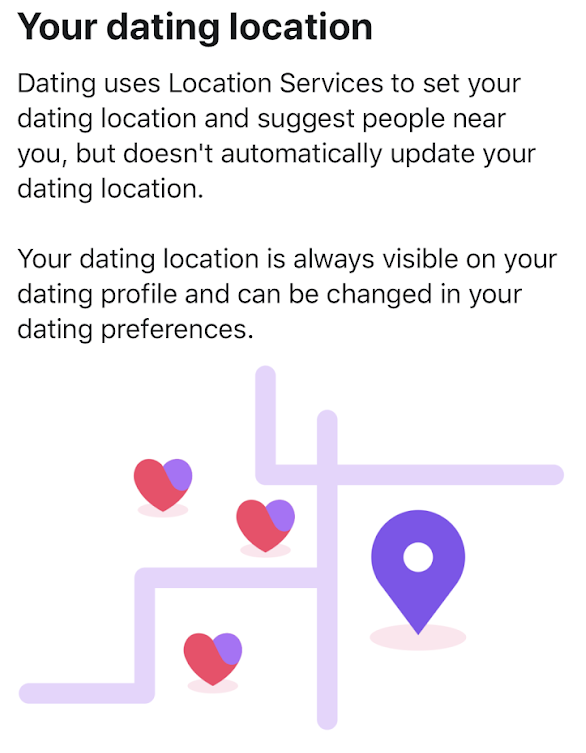 Facebook goes on to note exactly how the information you submit to Dating is used across the service and, once again, reiterates the great chasm between your Dating profile and your regular Facebook profile. You can also check out the Dating service’s terms and conditions, which basically say that Facebook isn’t responsible for anything horrible that happens to you on a date. 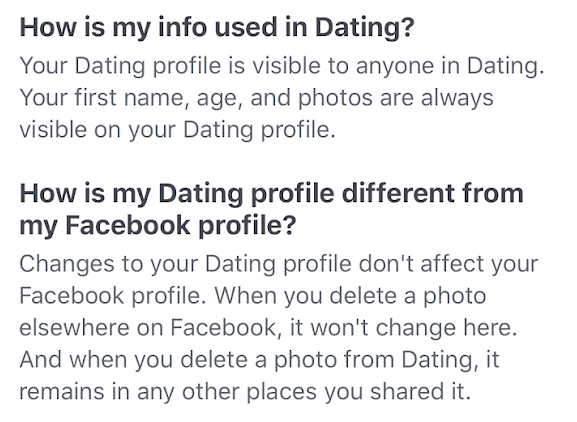 How to pick the information that appears on your Dating profile

Finally, Facebook will give you a prompt—it can create a profile for you, based on photos and information it extracts from your existing Facebook profile (I guess the chasm isn’t that wide between the two services)—or you can set up a profile manually. I recommend the latter approach, because that gives you the most control over the data and information you’re sharing. 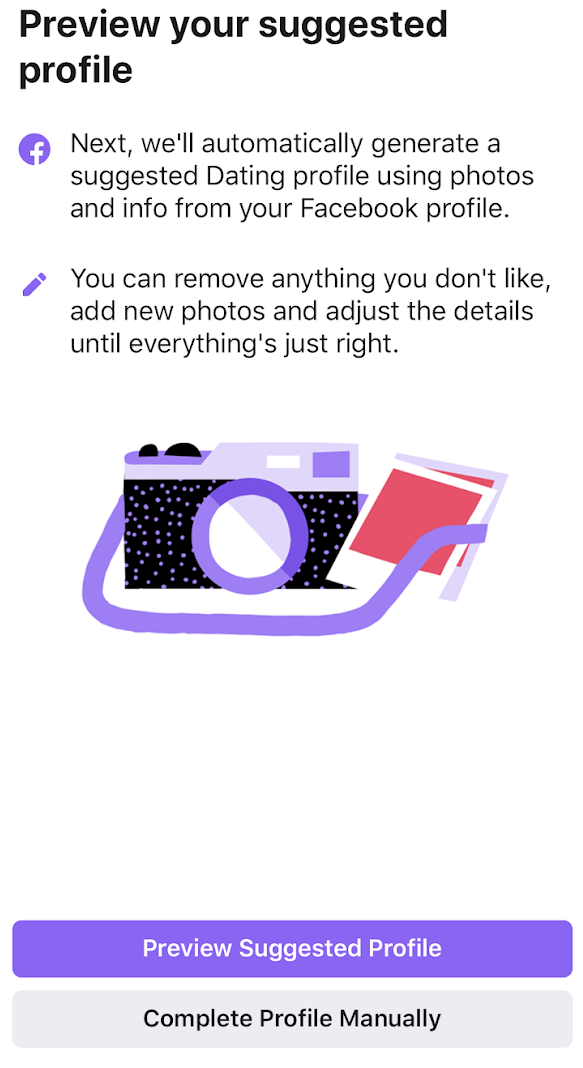 As part of the process, you’ll be asked to describe yourself in sentences, words or emoji; add some photos; and answer some pre-built questions such as, “The song that always gets me on the dance floor is…” (Ginuwine’s Pony, in case you were curious.) You’ll also be able to add some of your basic information, like height, job, number of kids religious views, etc.

The privacy options worth knowing once you’re ready to date

Now that you’re actually in the main part of the app, there are two sections you should investigate before you start your big search for love.

First, there’s Facebook Dating’s “Secret Crush” feature. Tap the “Add Secret Crush” button, and you’ll be able to pick up to nine Facebook friends that you have the hots for. They won’t know about your crush unless they pick you as their “Secret Crush,” too. 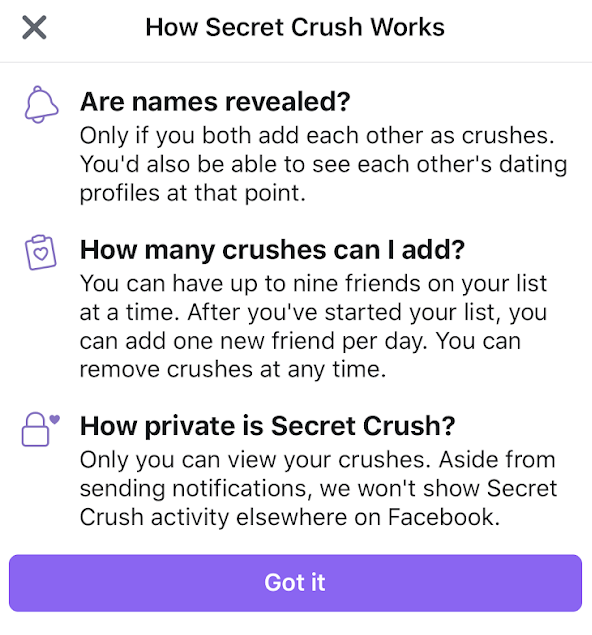 In other words, using this feature will open up your Dating profile to your Facebook friends—and it appears to be the only way that they would ever directly see you on the Dating service, but only if they have the hots for you.

Whether you pick a Secret Crush or not, you’ll definitely want to make a quick stop in the Dating service’s settings, found by tapping on the gear icon and tapping the “General” tab. Here, you’ll be able to set whether you want to receive notifications about new likes or messages (you probably do), you’ll get to revisit the privacy settings from earlier and, most importantly, you’ll be able to “Take a Break” from Dating if you’re getting tired (or have found the one). 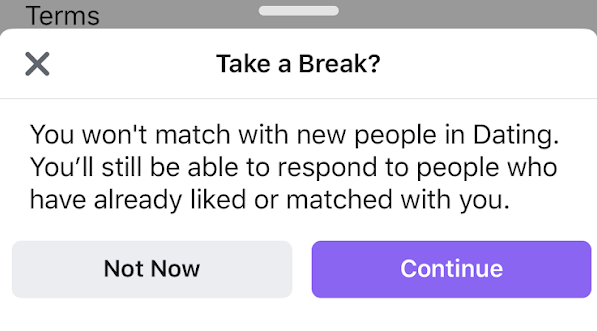 Finally, you’ll also be able to delete your entire Dating profile. Tap the button, tap “Delete Profile” again, and all your conversations and photos will join your profile in a great digital trash can. 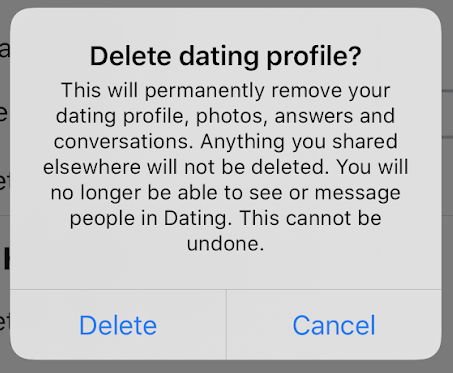 Eventually, you’ll be able to also see who is using Facebook’s Dating service among the people attending events you’re interested in (or groups you’re a member of). As Facebook notes, the only way to keep others from seeing you in groups or events is to not look for them yourself: 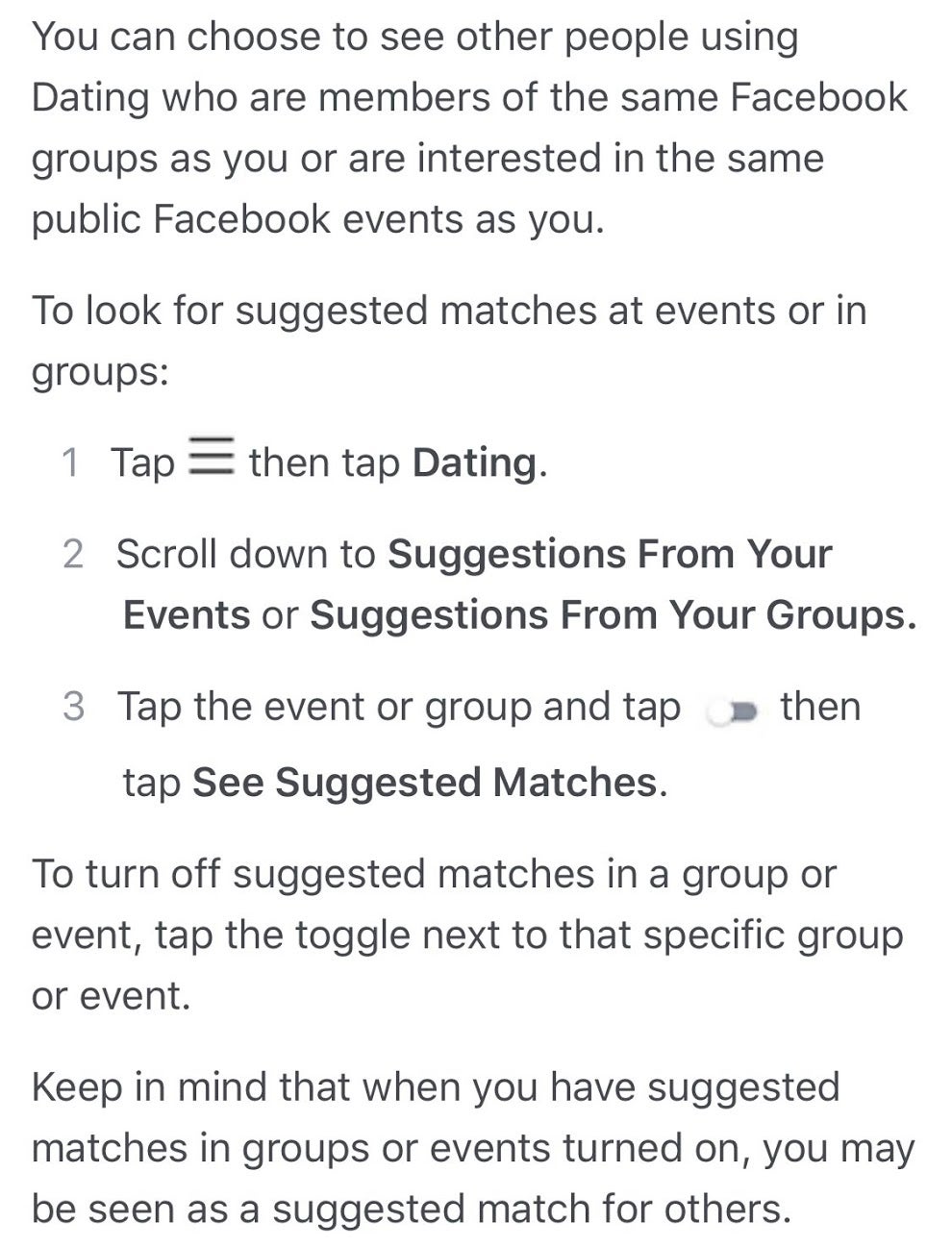 How to stay safe when you’re on an actual date

Eventually, notes Facebook, you’ll also be able to let your real friends know if (or when) you go on a date—an incredibly useful way to help ensure your safety and one time when we wouldn’t mind giving up our real-time location in the slightest.

“People using Facebook Dating can share details of their upcoming date and/or live location with someone they trust via Messenger. They will be able to control if they want to choose this feature. If they do, they are in control of who they share this information with.”

I couldn’t try this out myself, since I don’t have any dates at the moment (tear), but there’s no reason why you shouldn’t give it a shot. It beats the ol’, “I’m calling the police if you aren’t home by 10″ approach from your roommate (or parents).