How ‘Before And After’ Fitness Photos Are Faked

We’ve all seen those transformation photos of people going from pufferfish-like bellies to enviously defined abs. You may have mused, “I wish I could get to that ‘After’ picture, too.” Oh, but you can. Without actually being close to that great a shape, in fact. It’s not honest, but marketers do it, and hot damn, you will look fabulous.

To be clear, we’ll be referring specifically to physique-related ‘before and after’ photos, which are typically associated with a supplement, training program, piece of fitness equipment or a service people want to sell you. “You can get results just like Sally!” the ad exclaims, hoping you won’t notice the fine print that says “results not typical“. And the unfortunate truth is: Those photos work. They’re social proof that get you to try their special workout programs, think their expensive meals and supplements are somehow better and generally open your wallet.

The close placement of the pictures and their chronological arrangement from left to right can have a significant but subtle effect on establishing a story you can connect to. The trap is sprung when you start to imagine yourself as the after photo and set your own (unrealistic) expectations. I used to work at a company where photo shoots like this were the norm (and more ethical), and that’s where I learned all of the key components for a good before and after photo.

Take Your ‘After’ Photo First

You girls requested for me to share this after posting on snap last week ???? Picture on the left was taken one day before the wedding and the picture on the right was taken… 2 minutes after! Someone recently said to me that we all have our good angles and we all have our bad angles, so why do we let our bad angles carry so much more weight than our good angles? If you focus on how bad you look in the bad angles, at least focus on how good you look in the good ones too!! ???????? Tag a friend if you found this helpful ???? #fbggirls #loveyourself #realstagram www.annavictoria.com/guides

While there are multiple approaches to doctoring before and after photos, I suggest doing yours in reverse: We’re going to start by taking the after photo first. The thing is, your average fitness cover model cannot be a living embodiment of “physical perfection” for more than a day or two, because it often takes unsustainable, eyebrow-raising stuff to get to that peak physical condition in the first place. Yes, most of the year their physiques are still above average, but just not quite “photo shoot ready”. So it’s easier to start with your after photo and just let things go downhill from there – you know, when it’s perfect for your before shot.

Here are the important notes to hit: Your choice of clothing (or lack thereof if that’s how you roll), the surrounding light, your pose, the amount of water and sodium your body is retaining, your skin’s complexion (the more tanned, the better) and your “shininess” all affect how dramatic your “transformation” can appear. Don’t worry, this will make sense soon.

Standing up flexing vs sitting down relaxed ???????? I've worked out for a year and a half now, yes I still have body fat and I will always have some sort of amount of body fat. That to me is completely okay and I see nothing wrong with it because I'm comfortable with how I look in both of these pictures! I'm so happy with the way I'm eating and working out now and I don't want to change that to lose a bit of fat. A year ago I would've hated the photo on the right and done hours of cardio and starvation diets thinking that's the way to get rid of fat and that the fat would be non existent after a year of working out. I'm not trying to shame anyone when I say this, but I thought this because I didn't see any fitness people ever show their fat while sitting down. Yes I've seen posts about being bloated and pinching a tiny amount of fat on their bodies but I couldn't relate to that and it used to make me feel ashamed for still having so much fat on my body compared to theirs. So I wanted to post this comparison of how I look flexed and standing vs sitting down and relaxed to show that I still have fat on my body and it's completely normal to have fat, especially on your tummy area!! Also we need to stop comparing our bodies to people we see in media or real life- yes they are beautiful but you are just as beautiful as them, even if it's in a different way. Your uniqueness makes you, you, so don't try and change that. Who wants to live in a world where everyone looks the same? Just love yourself for who you are and next time you feel insecure sitting down when in a bikini, DON'T because you look fabulous!!! I hope you all have an amazing Sunday ????☀️

Make sure that you haven’t eaten anything (especially salty foods) or drunk any water in the last half of the day. Too much sodium and water make you appear bloated, which is going to show on the photo until PhotoShop makes it go away.

Step One: Pick Your Clothes Wisely

Usually, black spandex or bikini of some sort is a safe bet for your after photo, but make sure this particular article of clothing fits OK – perhaps even a bit loose.

The next part is weird but necessary, trust me. Apply a spray-on tan, but not so dark that it looks like you fell into a vat of chocolate. Just a shade or two darker than your natural skin colour for your muscle definition to peep through. For a little extra help with that, apply some fat. In the form of oil, that is. Baby oil, coconut oil or even an oil spray help give you a “shiny” look and emphasise all of your definition.

Step Two: Get a ‘Pump’ Going

Obviously, you want to convince your would-be admirers that you’ve clearly been working out. The tan and your oiled up body can only do so much, so go the extra mile by curling a heavy object like a dumbbell, preferably. Heck, bust out as many push-ups as you can if there’s no dumbbell around. The idea here is to get a “pump”, which is gym lingo for forcing blood to your working muscles which then makes them appear larger than they are. That way when you take your picture your muscles really pop and earn the ohh’s and ahh’s you so deserve.

The “pump” doesn’t stick around for long, so be sure to keep curling those heavy objects every now and again to maintain the illusion.

Step Three: Strike a Pose in the Right Lighting

You can almost take the picture now, but not really. You just have to get your pose and lighting right. The video above brilliantly demonstrates the importance of lighting and your pose in a photo. The right lighting makes a huge difference in how you look – more than you might know.

Your main goal here is to cast shadows on your body to accentuate your muscles. Think dark and moody lighting. You can add more dramatic emphasis with a reflector, like a white bed sheet or non-reflective white cardboard, which you or a helping hand can move around to make light bounce off you at just the right places. As soon as you can see muscles you didn’t even know existed, it’s perfect.

Don’t face the camera head-on with your hands hanging limp at your sides. It’s an amateur mistake, and it’s far better to turn slightly to one side, away from the light source, and keep your shoulders facing the camera and your hands on your hips. Maybe even hold something and pretend you’re working out with it. As you take your picture, flex your abs and muscles as hard as you possibly can. Oh, and smile. Don’t forget to show everyone how happy you are.

Reverse Engineer the After Photo for a Less Flattering Before Photo 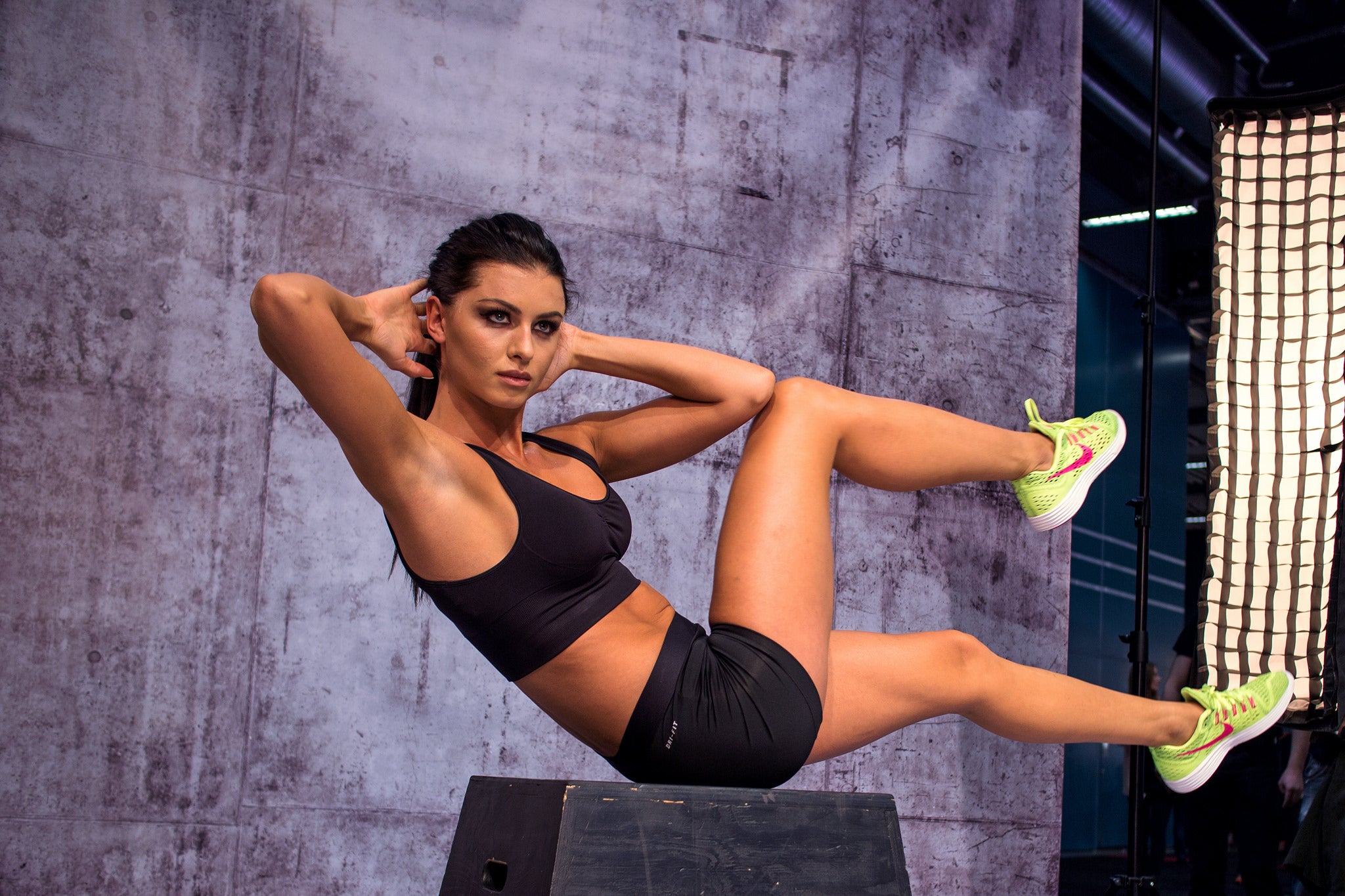 Great, now that you have your after photo, the fun begins. The goal is to make your before photo as unflattering as possible by simply reverse engineering it.

Yes, you’re allowed to eat now. In fact, eat the saltiest and oiliest foods you can get your hands on – fries, frozen pizzas, chips or a whole lasagna. Don’t feel bad. It’s not uncommon for fitness models to go a little overboard after a period of deprivation. It’s very likely you’ll immediately feel bloated, slightly ill and have a very obvious food bulge. Additionally, drink lots of water to make yourself look flat, which is a nice way of saying you no longer have any muscle definition. Hey, you’re on the right track.

You can give the illusion of incredible changes if you wore the same clothes from the after picture, except one size smaller. If you’re still slicked up in oil, wash that gross stuff off.

White or bright lights should be used for your before photo because they make you appear dull and flat. Make sure the light is pointing at you straight-on, and look very displeased, like your waiter had just brought you the wrong order and had to take it back to the kitchen. That means no power poses or even a smile. You’re miserable, remember?

Touching up the photo is the final but optional icing on the cake. A simple photo editor like LightRoom or Photoshop can do wonders for your after picture, but don’t overdo it on the editing, especially with making modifications to your body. You still want it to be convincing. Going from broomstick legs to elephant trunks is an easy way for this whole facade to come crashing down.

There you have it. You now have a before and after photo to share with the social media world! Apply a filter if you want, too. Because Instagram.

Sure, it still took some work, but not quite the same amount of work or realism you initially thought. Fortunately, other people won’t know that, and that’s the point. Not all before and after photos are fake. Some can be real, but there are just so many ways to manipulate or exaggerate them that you can’t believe them all. In all seriousness though, before and after photos aren’t all bad. If used correctly, they can actually be a fantastic tool to track your weight loss and fitness progress.