Do Monster Megalodons Still Lurk In Our Waters?

The sighting of a seven-metre shark off the South Australia coast last year excited the world’s media with some making reference to the great white that featured in the classic 1975 film Jaws. It was certainly a big shark but there are tales of even bigger beasts lurking in our waters.

With the release of the first trailer for Jason Statham’s “The Meg” where Statham has to fight a giant shark, we’re bringing this one back.

A quick Google search on “megalodon” brings up around 1.2 million hits about this monster prehistoric shark, made famous in the 2002 eponymous B-movie. Web pages feature frightening movie clips claiming to show evidence that this gigantic fossil shark, once reaching around 17m in length, is still alive out there, perhaps living in deep seas where they escape detection.

Megalodon (meaning “big tooth”) is really the vernacular name used for Carcharocles megalodon, an extinct relative of today’s great white and mako sharks in the family Lamnidae. Megalodon is known from its huge fossil teeth, the largest being 18 centimetres long, found nearly all around the globe in fossil marine deposits. It lived from about 16 million to 2.6 million years ago. 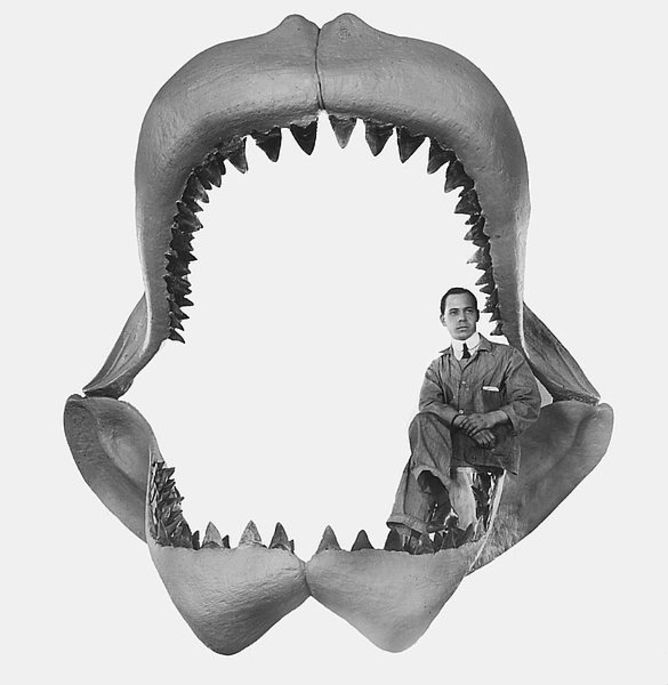 Reconstructed jaws of Carcharocles megalodon by the American Museum of Natural History, New York. This 1927 reconstruction is now thought to be about 30% too big, based on what we know about the teeth, but gives a good idea of the monstrous size of this shark. [Wikimedia]

The recent Discovery Channel mockumentary about megalodon still being alive had a short disclaimer that it was fictional. Nonetheless, it seems to have sparked a lot of subsequent interest in whether or not such a shark could really out there.

Several articles have been written with shark experts debunking these myths. So where did the stories of megalodon’s survival originate from, and what is the truth behind these claims?

Great White sharks: the big one that got away

Perhaps the first case of megalodon mania sprung from real published records of a monster great white in an esteemed museum collection. The largest living predatory shark today, the great white shark(Carcharodon carcharias) grows up to around 6.4m, based on a shark caught off Cuba in 1964.

Early records in the published scientific literature speak of an 11-metre giant caught of Port Fairy, Victoria in the 1860s. The jaws of this fish were sent to the collections of the British Museum of Natural History, in London. The calculated size of the fish was published in the book Catalogue of Fishes of the museum by Albert Günther, Keeper of Zoology at the museum in 1870.

But in the 1970s, American ichthyologist John Randall doubted this measurement and so he visited the museum in London to recalculate the body size. The original jaws that Gunther studied were examined and their measurements plotted against other specimens where accurate body length to jaw size was known.

Randall’s new calculation of the Port Fairy specimen was approximately five metres in length, within typical great white body size range. Randall suggested that a typo crept into the original publication where it should have read 16.5 feet but instead stated 36.5 feet.

Strangely, it was not picked up in the second edition of the book in which Günther added a maximum size of the shark being 40 feet (12.2m). These inaccurate size estimates published in such a scientifically respectable book no doubt fuelled the idea that monster great whites really did exist in modern times.

One last bit of relevant information about just how big great whites might grow comes from a report of measured bite marks on a whale carcass off Albany during the last decade of whaling in Western Australia.

Back in the mid-1970s, Colin Ostle was employed by the department of fisheries, and his job was to measure the whale carcasses that were taken by the whaling company.

I spoke with Colin and he told me how he also routinely measured shark bite marks on whale carcasses and recorded them in his notebook. Over a seven-year period he also caught around 60 great whites, so he was very familiar with their behaviour.

The largest jaw bite marks he ever recorded measured 19×24 inches as part of five bites, all made by the same very large shark which attacked a floating sperm whale carcass that had broken free of its chain as it was towed in to the harbour.

When compared to a 16-foot shark (4.87m) with a known bite gape of 11×13 inches, the scaling up of these large bites would suggest a shark up to 7.8m in length was then alive in the seas off Albany. In 1968, even larger shark bites were claimed to be observed on a whale carcass, but measurements were not recorded.

Shark ecologist Dr Charlie Huveneers of Flinders University is cautious about extrapolating absolute size from bite marks, but conceded to me that:

[…] it is quite conceivable that sharks larger than the scientifically confirmed maximum size exist, as for most species scientists are unlikely to have measured the largest individual of that species. 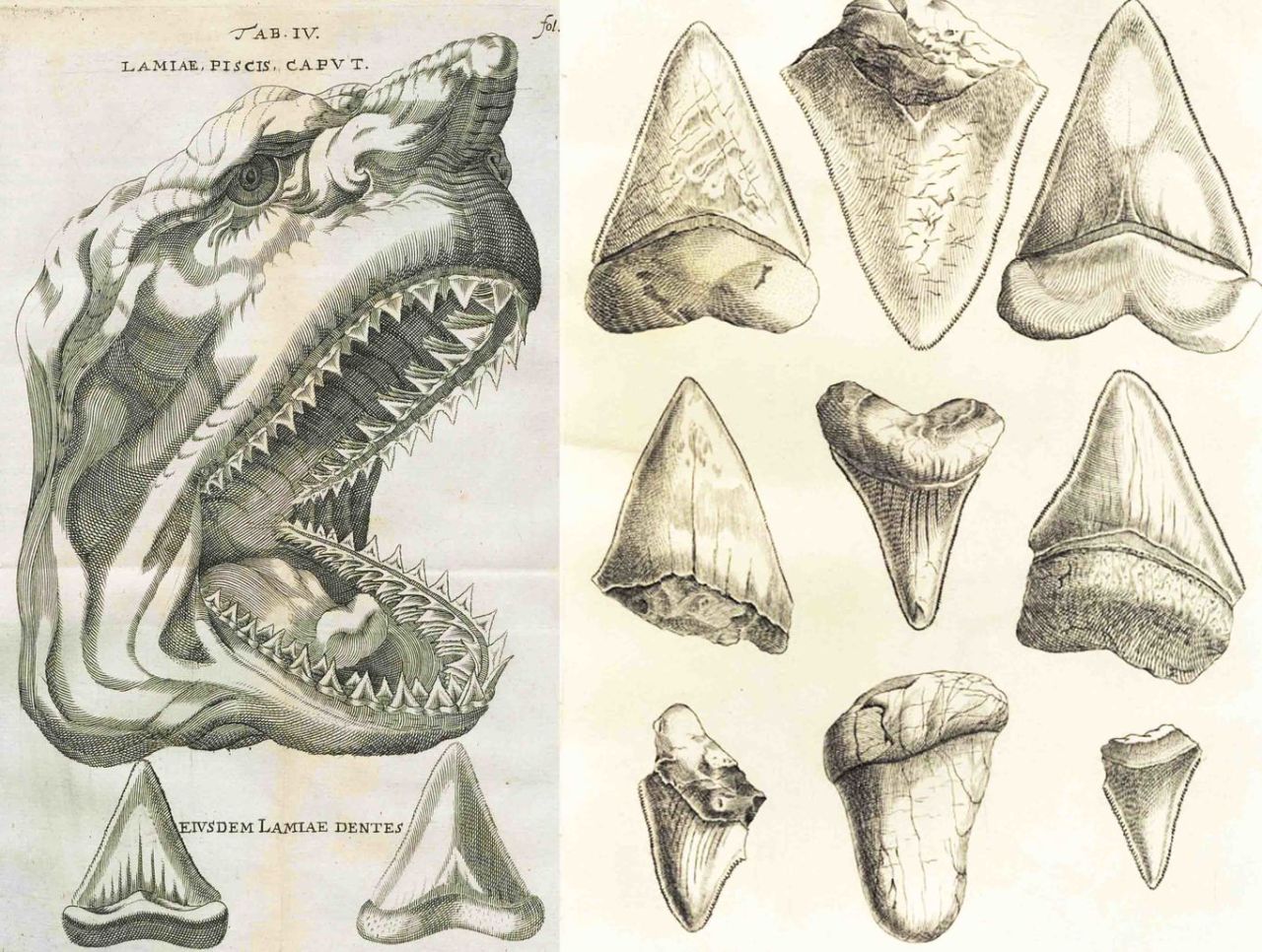 Woodcut from Niels Stensen’s 1667 monograph on the dissection of a great white shark. Megalodon teeth are pictured at right. Stensen identified them as sharks teeth rather than fossilised tongue stones.

New research about Megalodon and its demise

Around 400 years ago, megalodon teeth were thought to be petrified tongues. In 1667, the Danish anatomist Nicolas Steno figured out from his dissection of a great white shark head that they were the teeth of ancient large sharks.

Scaling up teeth and jaw size with known living sharks yields an approximate maximum size for megalodon around 17m. But, in weight, it would have been at least ten times the mass of a large great white shark.

Unlike great whites, we deduce that megalodon targeted large baleen whales as its prime prey, as we have found its tooth marks on fossil whale bones and sometimes teeth stuck into whale fossils. Some of these specimens can also be put down to scavenging behaviour. 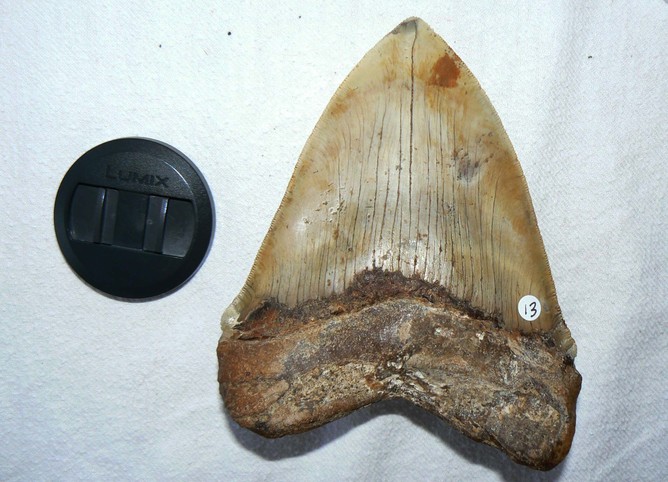 A large m tooth from California measuring close to 15cm. The largest tooth ever measured was just over 18cm, suggesting a maximum body length of up to 17m for this shark.

In recent years several scientific papers by Dr Catalina Pimiento, of the Florida Museum of Natural History, have greatly elucidated our knowledge about this impressive prehistoric predator. Her study calculating its trends in body size through time show its average size was likely around 10m for most of its 14-million year reign.

We know that its raised its young (starting at 2m length) in nursery areas of the eastern Pacific. Another study confirms that the species died out at least 2.6 million years ago, based on many reliably dated fossil sites.

Pimiento suggests that the the modern baleen whale fauna was probably established after the extinction of megalodons.

The reasons for megalodons demise are unknown, but could relate to either climate change or biological factors, like the events concerning the evolution and migration of whales to colder Antarctic waters where the sharks could not go.

I proposed this idea back in 1995 in the first edition of my book The Rise of Fishes. Dr Pimiento’s new research currently in press seems to support the view. She told me:

I found no evidence for a relationship between megalodon distribution and climate, and therefore, no support for such hypotheses. Instead, I found that megalodon trends in distribution coincide with diversification events in marine mammals and in other sharks, further supporting the biotic set of hypotheses.

It seems likely that the growth and huge size of modern baleen whales, the largest animals on the planet, could well have been driven by predation pressures from megalodons.

Their ability to endure and feed in near freezing Antarctic waters might have been a key reason why megalodons went extinct. Thankfully, for all of us who love swimming and diving in the sea.