Don’t Put Your Keys Between Your Fingers For Self Defence

Even if they haven’t gone so far as to get formal self-defence training, many people (particularly women) have considered what strategies they’d deploy if they were attacked by a stranger. A popular thought is that one would use an object on your person as a weapon of defence – like keys, for instance.

The technique known as “The Wolverine” – wherein you put your keys between your fingers, ready to jab an assailant – is widely known, but according to self-defence instructors, it’s also not a great approach. The belief that putting your keys between your fingers will make your hand into a deadlier weapon is so common a misconception, in fact, that every self-defence expert we spoke with said that they had at some point dispelled the myth for a student.

But as Gabrielle Rubin, founder of self defence course Female Awareness, tells us, even if you’re starting out with less-than-ideal strategies in mind, “I love that you’re thinking of something.” Here’s some more effective ideas to keep you safe – and yes, some of them still involve your keys:

Put Your Keys On Something to Give You Reach

The problem with the keys-in-hand gambit, Rubin points out, is that if you’re at the point where you’re trying to jab at someone with your fist, they’re already closer than you want. She suggested putting your keys on something called a kubaton, which is a kind of keychain based on a small bamboo weapon that can be used to hit your assailant (and also keep track of your keys). It’s both a weapon if they get near you, and a handle you can hang onto while beating them with the weight of the keys themselves.

“I put it on a carabiner,” says Rubin, “So if I was to hold them and swing them on the carabiner, I could swing them like a nunchuck.”

Another option would be attaching your keys to a lanyard or chain, for optimal swinging, though this is assuming you’re rivaling a janitor with your key collection.

Hold the Keys In a Way That Won’t Hurt You

Putting your keys between your fingers may be reminiscent of a wild animal or your favourite Marvel action hero, but the potential for damage to your own hand is high. Matan Gavish, founder of Krav Maga Academy, tells us that holding your keys this way will likely cause more problems for you than your assailant.

“First, the metal jagged area of the key can easily cause damage to the skin between the fingers when being used violently,” he wrote. “Sharp pain like that can lead to opening of the fingers which will immediately reduce the effectiveness of any strike.”

The base of the key hitting the inside of your hand after impact would also be painful, he added, all of which means you might drops your keys, leaving them vulnerable to a bad guy scooping them up. (And you’d be locked out of the house.) However, Gavish does note that if you have to throw a big ring of keys in someone’s face to get away, that’s an option.

He also suggests that if you must use your keys to fight, try “closing a fist around it with the sharp edge coming out the bottom or pinky side.” 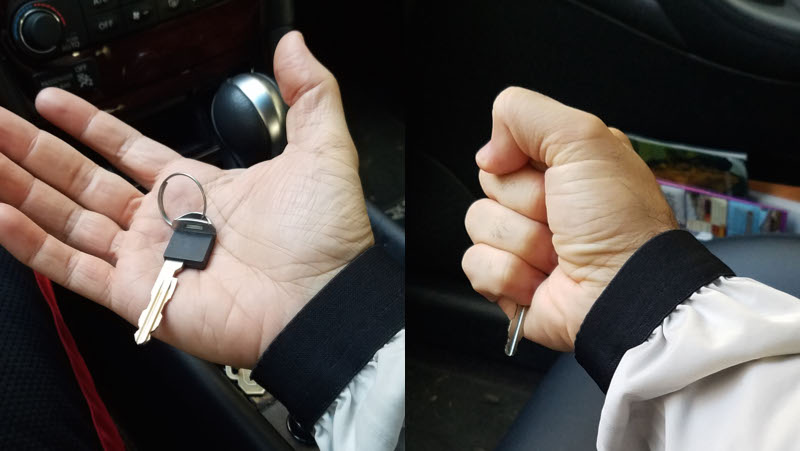 To Jab or To Pound

When it comes to using your keys, consider how you would want to use them. Rubin boiled the available techniques down to two factors: “hit bone, poke flesh.” If you’re holding your keys like Gavish suggested above, you’re poking. Go for the eyes, throat, solar plexus and groin. If you’re holding them as more of a club, you want to hit them in places with a lot of bones. Striking someone in the hand is always far more painful than the forearm, for example, which is generally protected by fleshy muscles.

Chris Moran from JKD NYC also shared some photos for an effective strike, and though he didn’t have quite as harsh a critique of the Wolverine, he did say that the technique limits a person “to striking in punching mechanics.” He suggested two ways to hold your keys depending on many you have, and then coming down on an assailant like you’re “drawing a ‘X’ with your hand for attacking.” 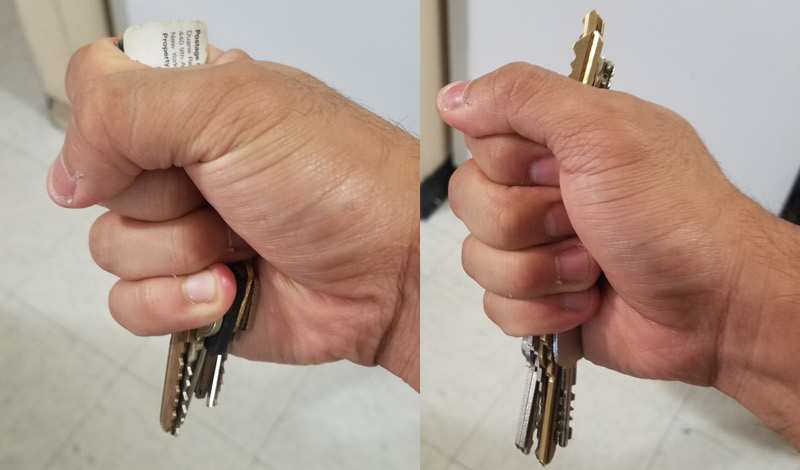 The overall message is that keys can be used as a weapon in a confrontation, but some tactics are much more effective than others, and the most widely-publicized method may actually be counterproductive for your safety.

The simple idea of “I’ll use my keys!” is tied to what Rubin calls the “illusion of safety”; lots of people are afraid to carry more serious self-defence devices, because they fear they will be turned against them. Also, most of us would rather just not think about the upsetting prospect of being attacks. But if someone is close enough to poke with your keys, you’re probably better off pulling their hair, scratching with your fingernails, and going for their eyes. Also, she points out that scratching someone “gets their DNA.”

Hmm, wonder why no one wants to think about all this.