broadbandinternetnbn
At Lifehacker, we independently select and write about stuff we love and think you'll like too. We have affiliate and advertising partnerships, which means we may collect a share of sales or other compensation from the links on this page. BTW - prices are accurate and items in stock at the time of posting.

Australia is a vast brown land with some of the world’s worst fixed-line internet speeds. But a recent study has shown some areas of Australia are noticeably worse than others and it’s the small cities that are shining. Here are the average Mbps speeds of each state capital, ranked.

NBN Co has announced plans to increase speeds for some customers by 2023. However, if you're currently saddled with a fibre-to-the-node (FttN) connection - like most residential NBN users - there are no plans to upgrade the bandwidth for the next four years. Guaranteed speeds won't exceed 25 Mbps, even in 2023.

Which Australian city has the fastest NBN?

Hobart was Australia’s fastest city in terms of broadband speeds reaching an average of 44.9Mbps, according to Finder’s analysis of 14,800 broadband speed tests between July 2018 and July 2019.

Surprisingly, Darwin wasn’t far behind averaging 42.4Mbps, which is much closer to the NBN’s promised 50Mbps speeds for fibre-to-the-node (FttN) customers.

Rounding out the bottom was Perth and Adelaide with 23.9 and 24.3Mbps, respectively. Faring slightly better was Sydney with 27.7, Melbourne with 29.2, Brisbane at 27.1 and Canberra, where the nation’s leaders shape our policies regarding the web, at 28.4Mbps.

Here’s how each capital city ranked: 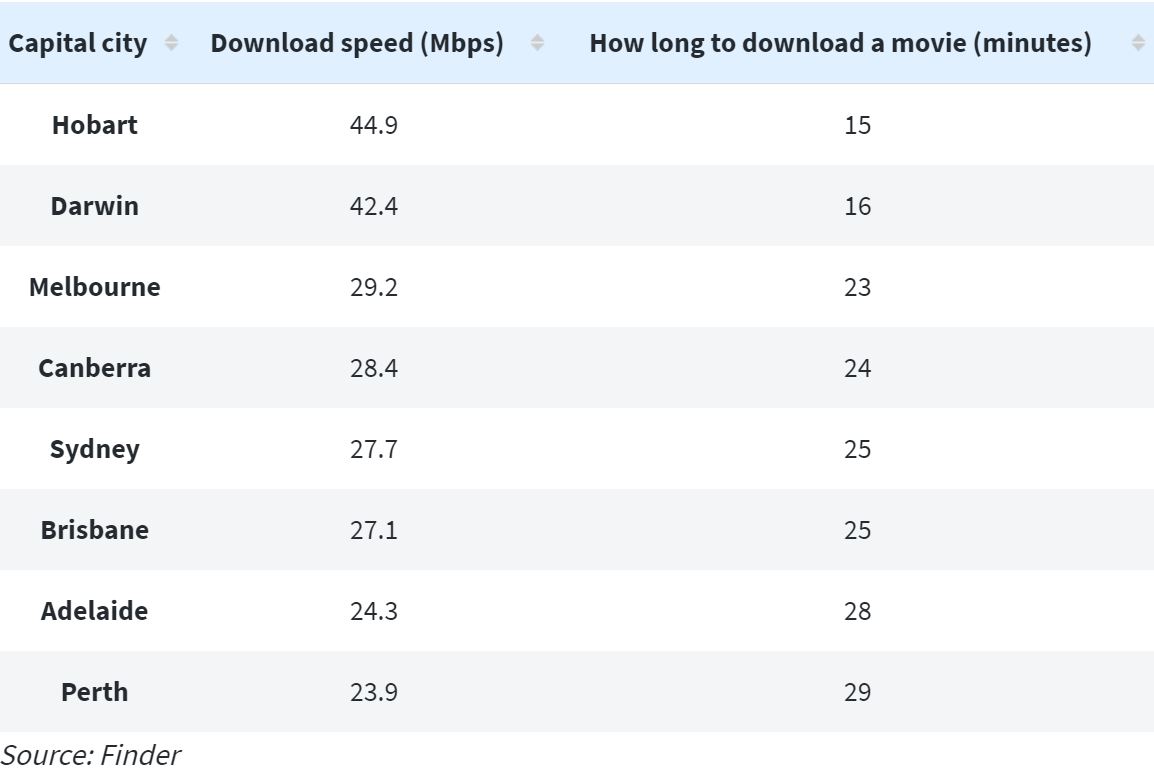 Bad internet speeds can’t be blamed solely on the NBN, like many of us might do. Factors like having a cheap plan despite living in a house with multiple users, being too far away from your modem when accessing wireless and using the internet during peak periods (around 7pm to 9pm each night) can slow things down too.

But if fixing all that up isn’t making your speeds any better, you can upgrade your internet…

If speed is what you want in your broadband plan and you don’t mind paying a bit extra, check out these options.

With most broadband relying on the NBN network now (which we know isn’t always the most reliable), you might want to avoid it altogether and opt for home wireless broadband.

How To Speed Up Your Internet Connection

You might be paying your ISP for a certain service tier, but that doesn’t mean that you’re getting those speeds both ways -- the fine print will likely indicate that your upload speeds are much, much slower than your download speeds.