This Coconut Tres Leches Cake Is Vegan And It Is Spectacular

Every cook needs a go-to dessert recipe. Even if you insist you’re really more of a cook than a baker, even if you’re put off by scales and stand mixers and specialty flours and expensive silicone mats, I promise that there’s a back-pocket recipe out there for you — and I think it should be an oil cake.

Oil cakes are the absolute best, and I’m here to tell you why. Unlike butter-based cakes, which require a hand or stand mixer to accomplish the requisite level of creaming, oil cakes are mixed by hand, in one bowl, in about five minutes. They’re also almost unbelievably moist, and they stay that way for days, if not weeks, even in the fridge.

If there’s a downside, it’s that an oil cake is a little too tender and too moist for layer cakes — but those qualities are ideal for a no-fuss sheet cake, which is the only kind of cake I’m ever interested in making. (Or, frankly, eating.) Oil cakes are perfect, is what I’m getting at.

Even better, to my mind, is the sub-category of oil-based cakes known as “wacky cakes.” These egg-free, milk-free wonders originated during the Depression, when animal products were hard to come by. Instead of whipped eggs, wacky cakes are leavened by baking powder and a splash of vinegar.

Their moisture comes from cheap cooking oil instead of butter. They have short ingredient lists and are even easier to throw together than a standard oil cake: whisk dry ingredients together, then whisk in wet ingredients. Bake. Oh, and they happen to be vegan.

The love of my wacky cake life is this chocolate cake from Smitten Kitchen, which uses strong coffee and fruity olive oil to intensify the flavour of even mediocre cocoa powder. However, thanks to several failed rounds of no-churn coconut-based ice cream experiments, I have a bit of a surplus coconut milk situation in my kitchen. So, today, we’re making the equally delightful coconut version, tres leches style.

A classic tres leches cake is a serious dessert weakness of mine, but even though I’m blessed enough to be mostly lactose tolerant, it’s a lot of dairy to take in at once. Since I’ve always loved coconut-spiked versions of the classic, I figured that swapping out the cream and evaporated milk for entirely coconut-based versions would work nicely.

I wasn’t just right, I was correct. This cake is a coconut lover’s dream. The oil and coconut milk in the batter mean that the crumb is soft, tender, and on the dense side to begin with. Soaking it in three different forms of coconut milk — sweetened condensed, reduced until thick, and straight from the can — basically turns it into a coconut-flavored truffle: 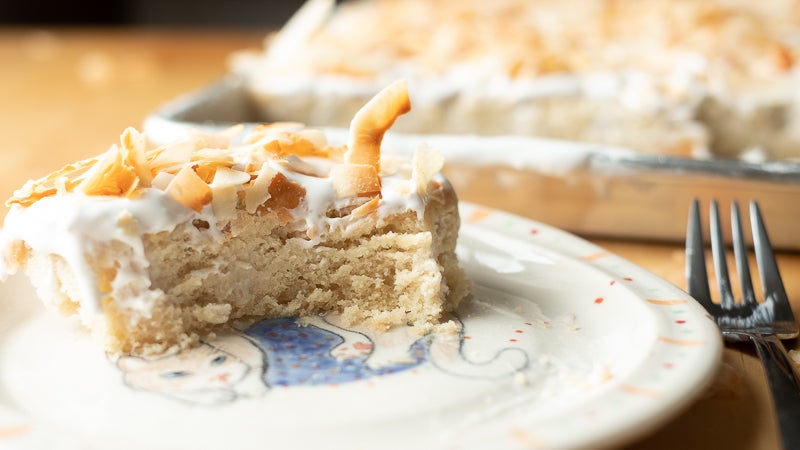 Finish it off with a generous layer of ready-made whipped topping and a shower of toasted unsweetened coconut, and you’ve got a cake that’s the best of all possible worlds: rich, decadent, light, fluffy, crisp and bursting with the full spectrum of coconut flavour, from fresh and creamy to deeply toasted. It ticks all the boxes of an excellent coconut cream pie, but it’s vegan and a tenth of the work. Bring this to your next end-of-summer barbecue and watch it disappear. 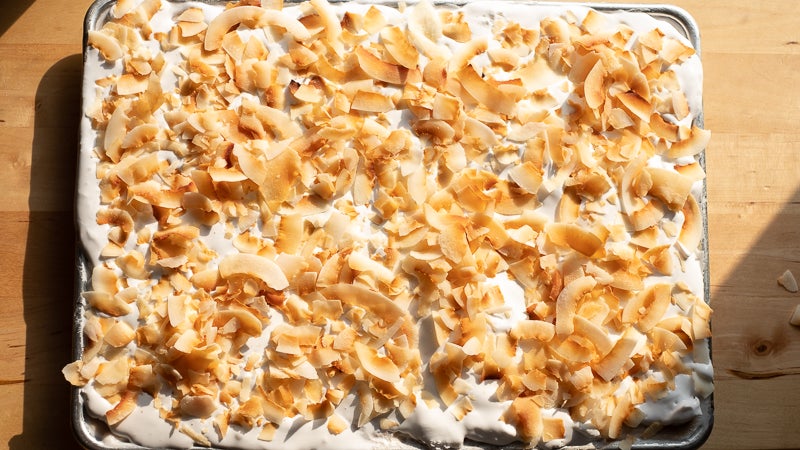 The base cake is adapted from Smitten Kitchen’s Plush Coconut Cake. I use a mix of vegetable oil and melted coconut oil for texture reasons, and I always, always add vanilla. Since this is a sheet cake, I also use a two-phase baking technique to keep the top as flat as possible. Starting the cake at 160 degrees Celsius bakes it through without forming a dome. A quick blast of heat at the end achieves that golden brown crust we all love.

Prepared vegan whipped cream is readily available, guaranteed to work and tastes great. (Frozen coconut whipped topping is absolutely outrageous here, but as I discovered, it loves to melt, so keep that in mind when choosing your topping.)

Heat your oven to 160 degrees Celsius and spread the coconut on a baking sheet. Toast in the oven until golden brown, 5 minutes or so, then set aside to cool. Keep an eye on them, because they’ll burn quickly. Transfer to an airtight container. 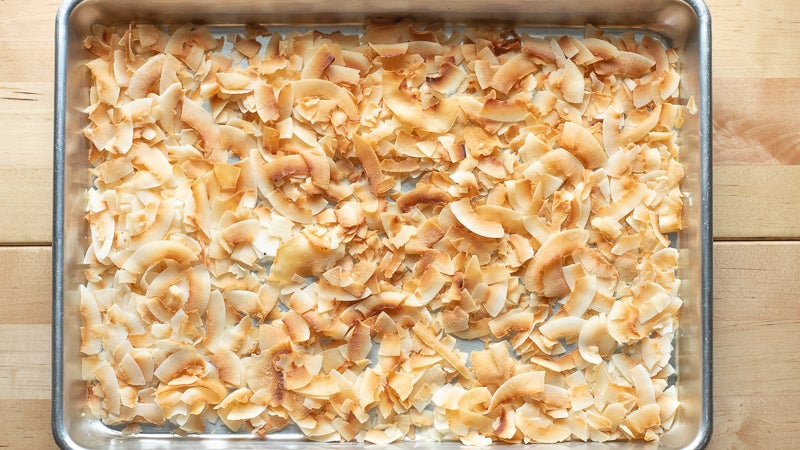 Shake your cans of coconut milk thoroughly, measure out 1 1/2 cups from one of them, and set it aside. This portion is for the cake batter. Everything else is for the soaking mixture.

Pour the remainder of the first can of coconut milk — you should have about 1/4 cup left over — plus another whole can into a saucepan and bring to a full boil over medium-high heat. Reduce heat to medium-low and simmer, stirring occasionally, until reduced by two-thirds. Let cool slightly, then stir in the sweetened condensed coconut milk and the last full can of coconut milk.

While the coconut milk reduces, make the cake. Lightly coat a quarter sheet pan or nine-inch round cake pan with cooking spray and set aside. Whisk the flour, sugar, salt and baking powder together in a large bowl until thoroughly combined, then whisk in the reserved 1 1/2 cups of coconut milk, plus the oil, vinegar and vanilla. Continue whisking until smooth. Scrape the batter into the prepared pan and level the surface with a spoon or offset spatula. 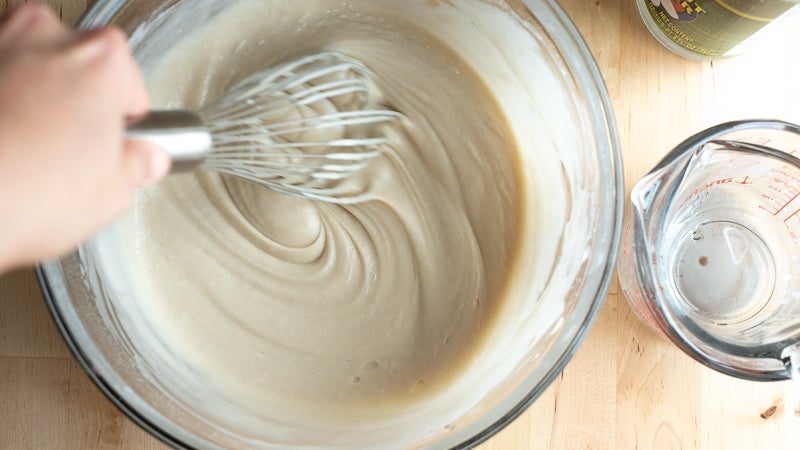 Behold: all the equipment you need to make this cake. (Photo: A.A. Newton)

Bake the cake at 160 degrees Celsius until it sets in the centre but is still quite pale on the top and sides, at least 15 or 20 minutes, depending on your pan. Once the cake has set, increase the heat to 180 degrees Celsius and bake until the cake is evenly golden brown, another 10-15 minutes. 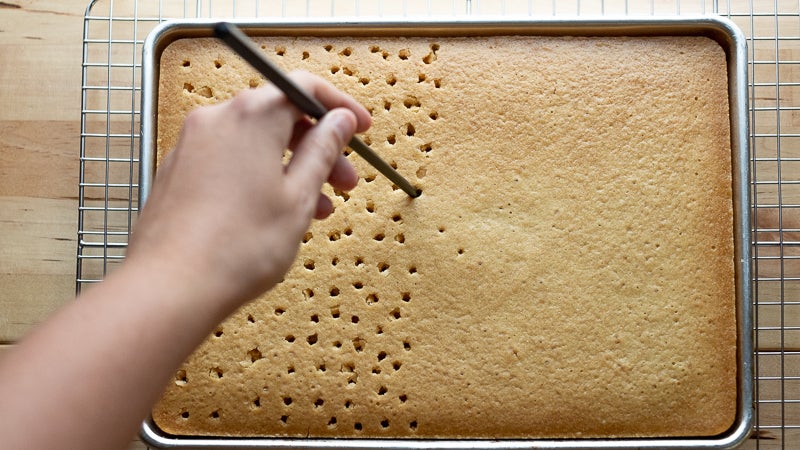 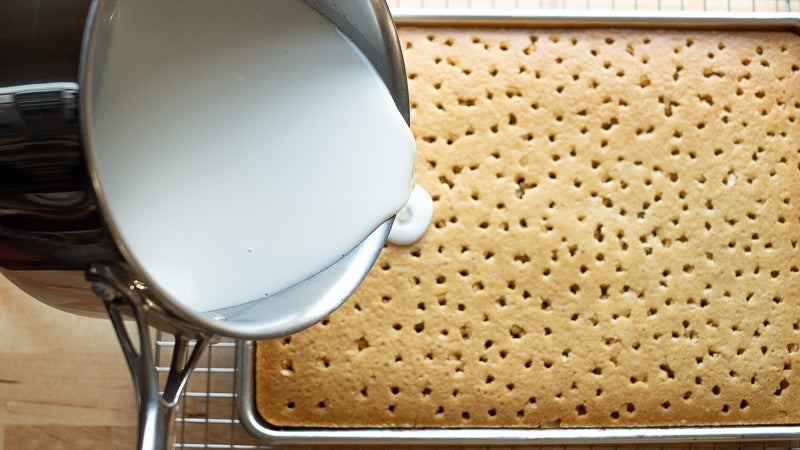 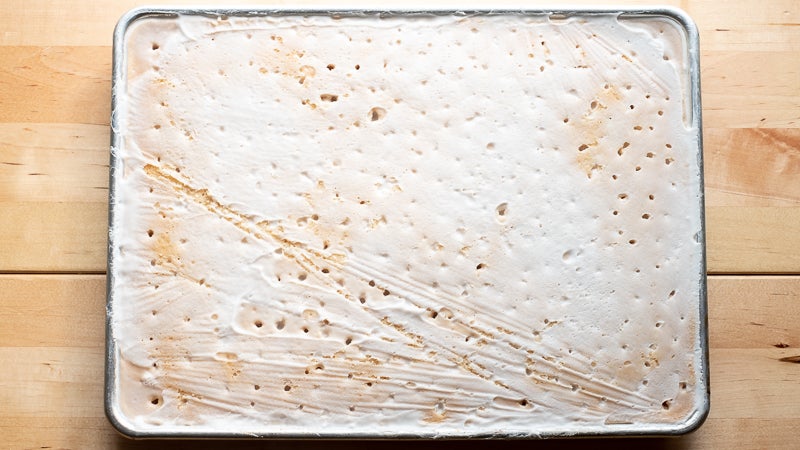 This is what it looks like after soaking in the fridge overnight. (Photo: A.A. Newton)

Cool the cake completely in the pan, then poke it all over with a chopstick and absolutely drench with the coconut milk mixture in the saucepan. Save any leftovers for coffee. Cover tightly with plastic wrap and refrigerate for a few hours or overnight.

Just before serving, dollop the cake with your topping of choice and swoosh into an attractive pattern with the back of a spoon. Sprinkle generously with the toasted coconut flakes and dig in. Do I even need to tell you how good this is for breakfast with a cup of black coffee? I didn’t think so. 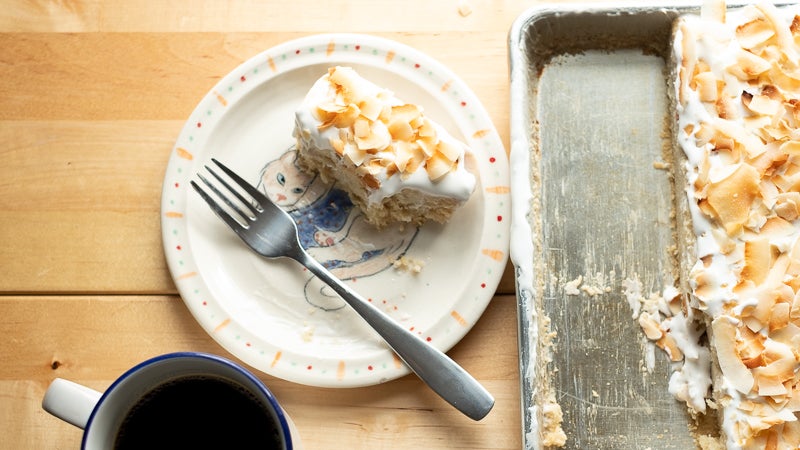