I’m Mark Zuckerman, President Of The Century Foundation, And This Is How I Work

The Century Foundation turns one century old this year. The progressive think tank has shaped U.S. history, assisting in the birth of the SEC and advising on Social Security, urbanisation, fair elections, strengthening workers’ rights, the fight against terrorism and preserving civil liberties. We talked to Foundation president Mark Zuckerman about running the Foundation in the 21st Century and finding young policy leaders for the Foundation’s new “startup think tank,” Next100.

One word that best describes how you work: Collaboratively

We’re able to focus on laying the groundwork for policy change down the road, in ways that people putting out fires all day long can’t really do.﻿

I started my career as a VISTA volunteer in the late 1970s, in Burley, Idaho, working as a community organiser in mostly Hispanic neighbourhoods. At the time, the Hispanic community in Burley was facing significant challenges, in terms of access to quality health care, getting a good education, being able to put food on the table, obtaining the skills to land good-paying jobs, and so on.

Plus, many felt excluded from the larger (and whiter) Burley community, and often faced hostile attitudes and experienced discrimination due to their ethnicity. My role as an organiser was to help overcome those barriers — to empower Hispanic families, give them a stronger voice in their community, and help them be better advocates for themselves and their interests.

Through that experience, I saw firsthand the incredible power that the federal government has when it comes to ensuring critical — and, at times, life-saving — protections for Americans. Many families I worked with relied on support from the federal government for their housing (through Section 8), their medical care (through Medicaid and the Hill-Burton Act), and their food.

The experience drove home for me the importance of having a robust social safety net. It made me want to dedicate myself and my life’s work to helping the most vulnerable among us, and to ensure that there is always a backstop for people who are working hard but still struggling to get ahead.

After Burley, I went to law school to get the technical skills and training to be an effective advocate, and then began what is now nearly a four-decade career in public policy, working in state legislatures, in the U.S. Congress, and most recently in the Obama administration as deputy director of the Domestic Policy Council. Now, I lead one of the nation’s oldest public policy think tanks, which happens to turn 100 years old this year. 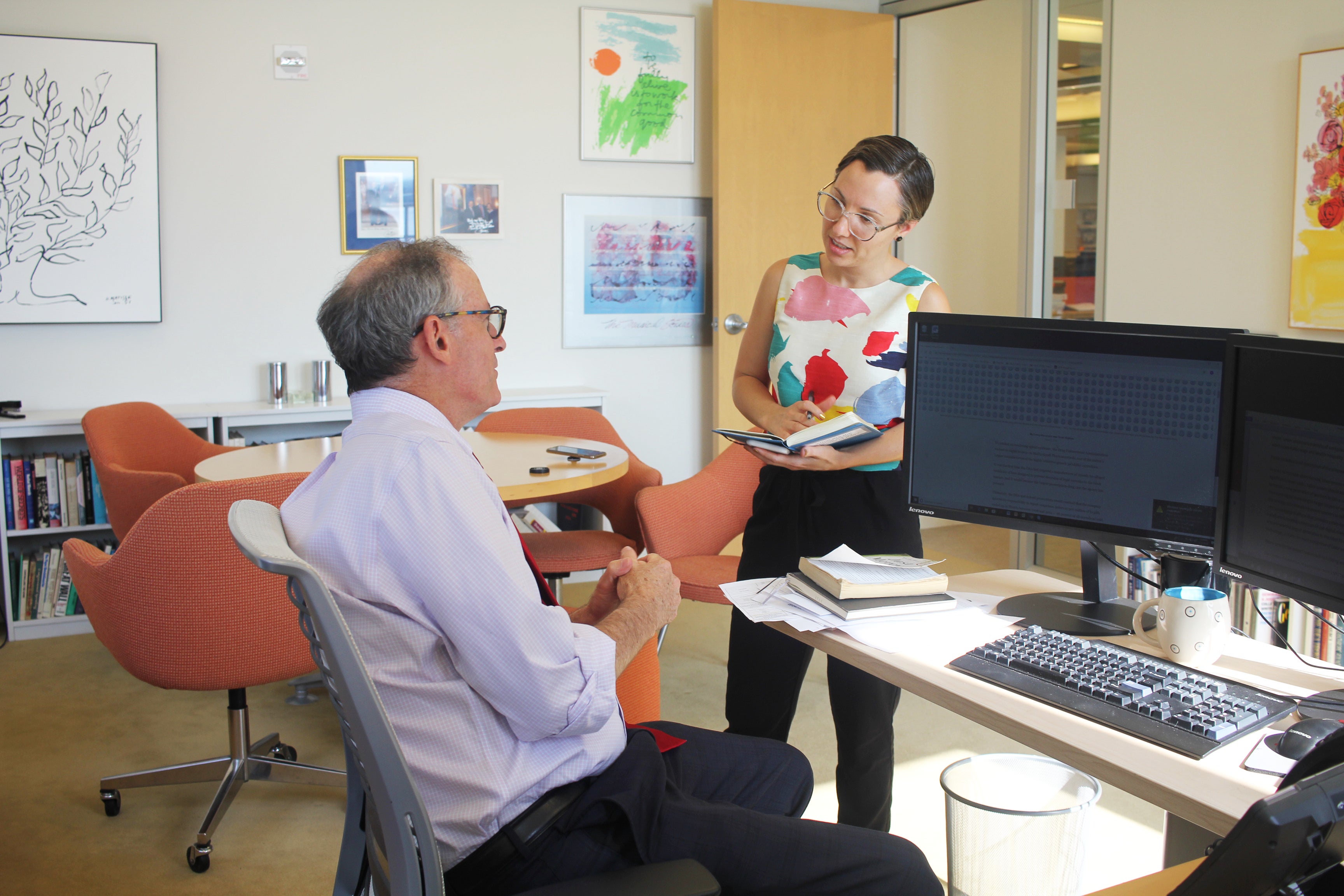 What are the major responsibilities of your job, and what do you oversee?

As president, my core responsibility is to advance the mission of the Century Foundation, which is to tackle inequality and expand opportunity throughout the country. So much of my job is focused directly on that: working with colleagues to help make transformative change and to advance policies that measurably improve people’s lives.

That means everything from expanding educational opportunities (from child care all the way to higher education), strengthening the labour movement and helping working families thrive, winning universal access to high-quality, affordable health care, and promoting peace and security in the Middle East.

Treat people decently, because it’s the right thing to do and it pays off in every way imaginable.﻿

One of my favourite things to do each day is to meet with our policy associates — mostly young people who have amazing energy and commitment and smarts. Associates at TCF are really integral to the work that we do and the impact that we have.

They do so much more than simply assist fellows on research projects: they’re writing their own reports and publishing their own analysis, testifying before government bodies and advising elected officials, advocating on Capitol Hill, and so much more. They bring new and unique perspectives on how to get things done and how to make change happen. Meeting with, learning from, and strategising with them is one of the best parts of the job.

A lot of days, I’ll participate in one of TCF’s many public programs and events, either here in New York City, in Washington, D.C. (where our second office is located), or on the road (for example, we recently culminated a tour of the industrial heartland, focused on revitalising manufacturing communities). I’m quite proud of TCF’s public events, as I think they do a good job of bridging the gap between scholarship and practice, bringing together diverse thinkers, and are genuinely engaging to attend (something you can’t say about all think tank events!).

We have a regular series with NYU Wagner called “Debates of the Century,” for instance, which showcases leading experts who debate — in a thoughtful, informed, and respectful way — some of the most vital national policy issues of our time. We’ve held debates featuring people like Edward Snowden and Fareed Zakaria, on topics ranging from school segregation to congestion pricing, and the series has developed somewhat of a following in New York.

Lastly, I usually spend a portion of each day meeting with people outside TCF — whether it’s policymakers, other research organisations and think tanks, advocacy groups, community leaders, funders, etc. I see research and policymaking both as a team effort, so a good deal of my time is spent working with others to strategise on how best to use our collective resources and energy to achieve policy impact.

One of the challenges about leading a national think tank is staying current on everything that is happening in the world of policy, politics, and research. So I try to set aside time each day to staying current, whether that means reading a new study that a peer organisation recently published or even just catching up on the newspaper. 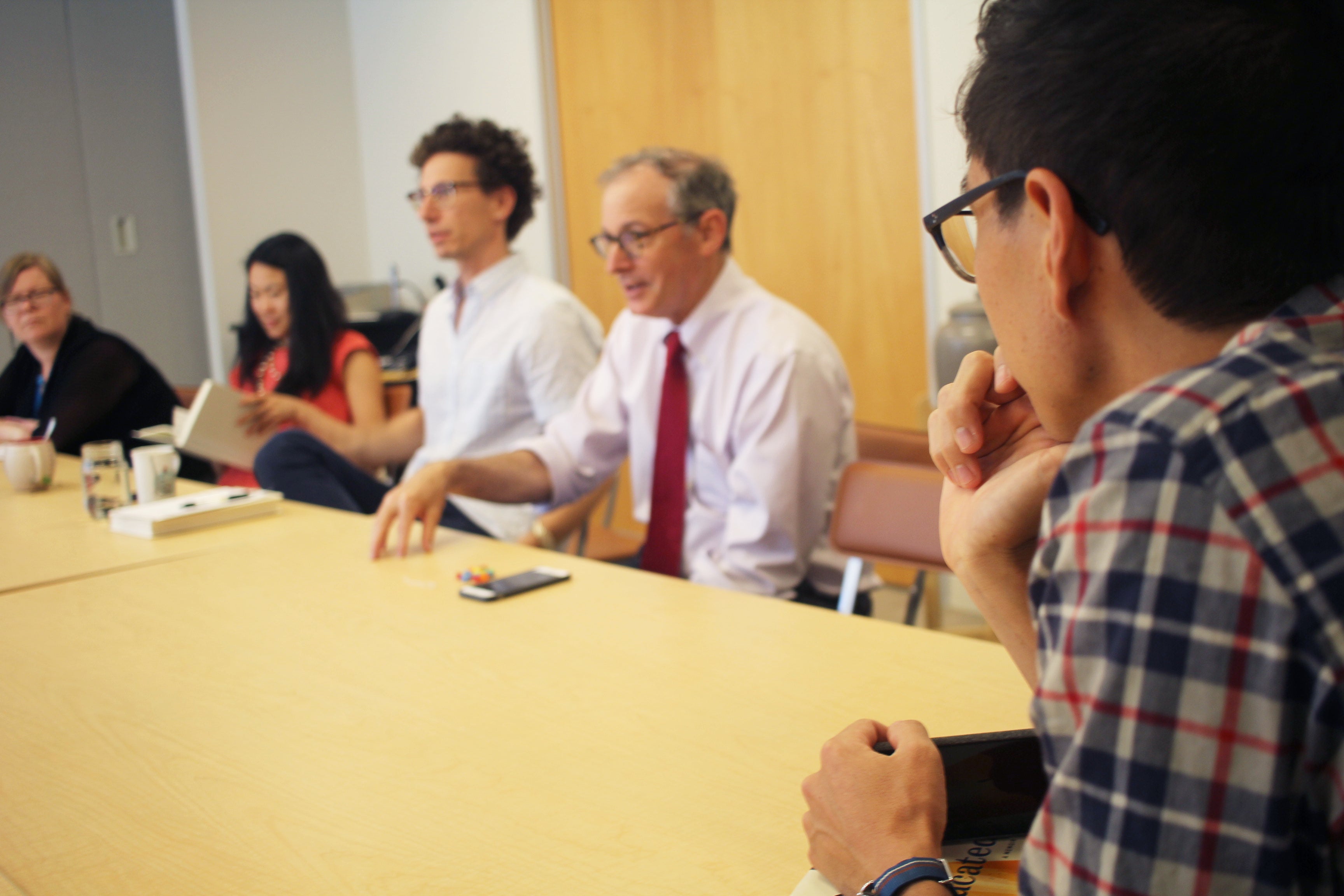 My children are still in the young adult phase of their life, so I think using Venmo is pretty indispensable — and so do they. Also, the coffee maker.

TCF’s headquarters is in lower Manhattan, and one of the things I love most about my office is the clear view from my desk of Ellis Island, where my great-grandparents came to to start a new life for my family in the late 19th century.

The rest of my office setup is pretty standard: a dual-monitor workstation, which I often convert to a standing desk; a TV, usually with MSNBC turned on in the background at a low volume; a circular meeting table in the corner; hung pictures of family, friends, and old colleagues (including with President Obama and former Congressman George Miller); and, in true think tank fashion, lots of books lining the walls, some more wonky than others.

My favourite shortcut — literally and figuratively — is the best public bike share program in the country: New York’s Citi Bike. I’ll admit that I’m somewhat biased: My wife, Polly Trottenberg, is NYC’s Transportation Commissioner, and she’s done incredible work to expand Citi Bike and make cycling in the city easier and safer. So we’re both big fans of Citi Bike, and use it often to get around the city. 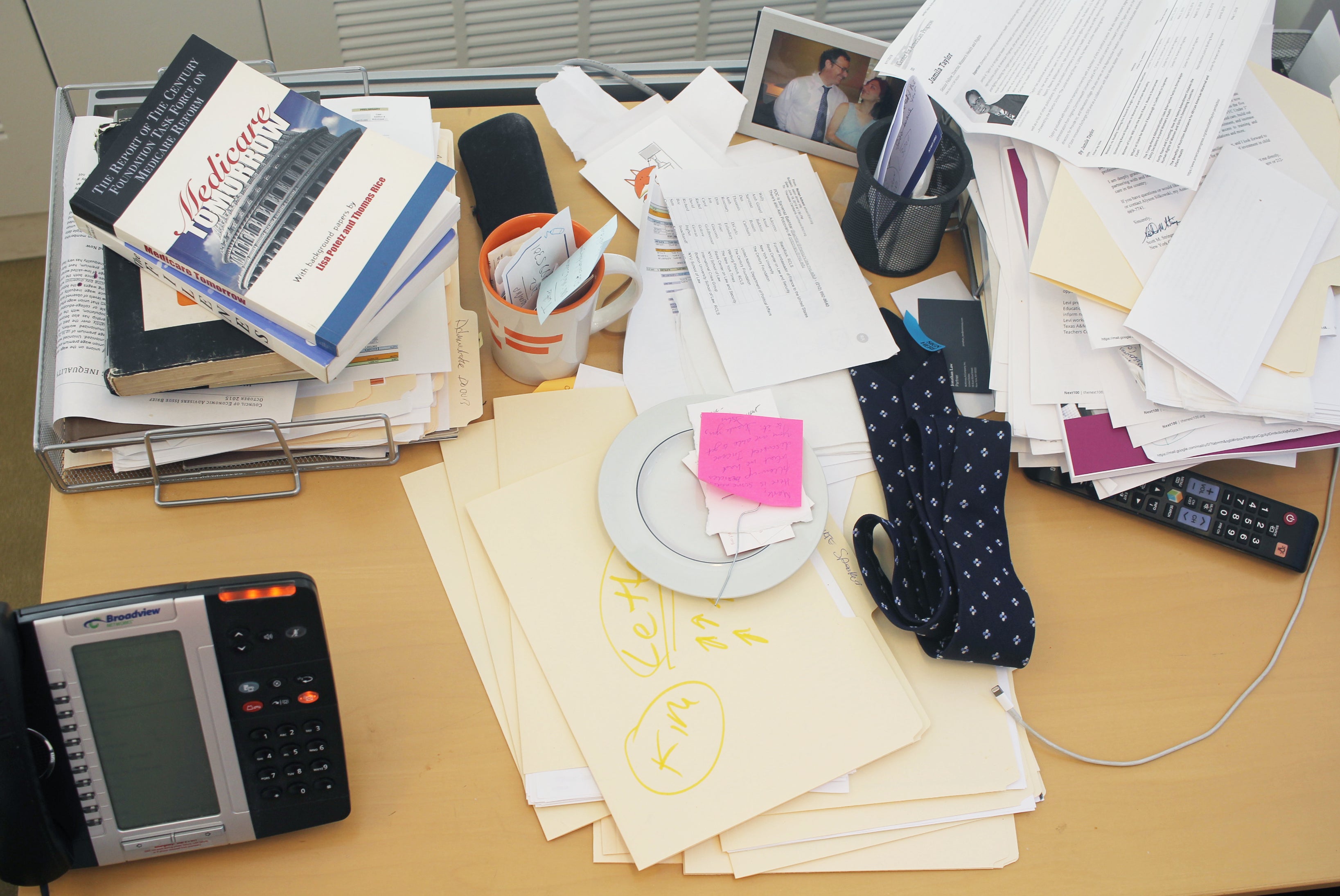 Every year since I’ve been president, Polly and I invite all TCFers from across the country to our home in Brooklyn for the annual TCF holiday party.

It’s always a fun night — full of good food and drinks; an increasingly intense game of White Elephant (think Secret Santa, but with the ability to steal other people’s gifts); a speech from me, which always features ten jokes about things that happened during the previous year at TCF (which land with varying degrees of success); and even a karaoke round or two (which sometimes leads to three or four at a nearby bar, usually when the hosts get tired).

As TCF keeps growing in size, I’m not sure how many more years I’ll be able to host the party at our house. I haven’t decided if that’s a good or bad thing.

My wife Polly and I love to hike the national parks. We just got back from a 5 day hike in the Great Smoky Mountains, and it was beautiful.

To celebrate TCF’s 100th anniversary this year, we decided to go pretty big, and launched a new, independent “pop-up” think tank called Next100. The vision behind Next100 is to empower a new generation of policy leaders, and put people who are usually locked out of the policy-making process in the driver’s seat of policy change.

It’s a pretty unique experiment that, to my knowledge, doesn’t have much precedent elsewhere. We’re making a big investment in eight emerging leaders, and giving them full-time, salaried positions with benefits in NYC for the next two years. They’ll work on the issues that matter most to them, lead their own research agendas, and try to make policy change in the lead up to the 2020 election.

TCF has a quarterly staff book club, and this week we just finished Educated by Tara Westover, which was a powerful memoir and testament to the transformative power of education. I also recently read David McCullough’s Pioneers, which is about the settling of the U.S. Northwest territory. I’d highly recommend both books. 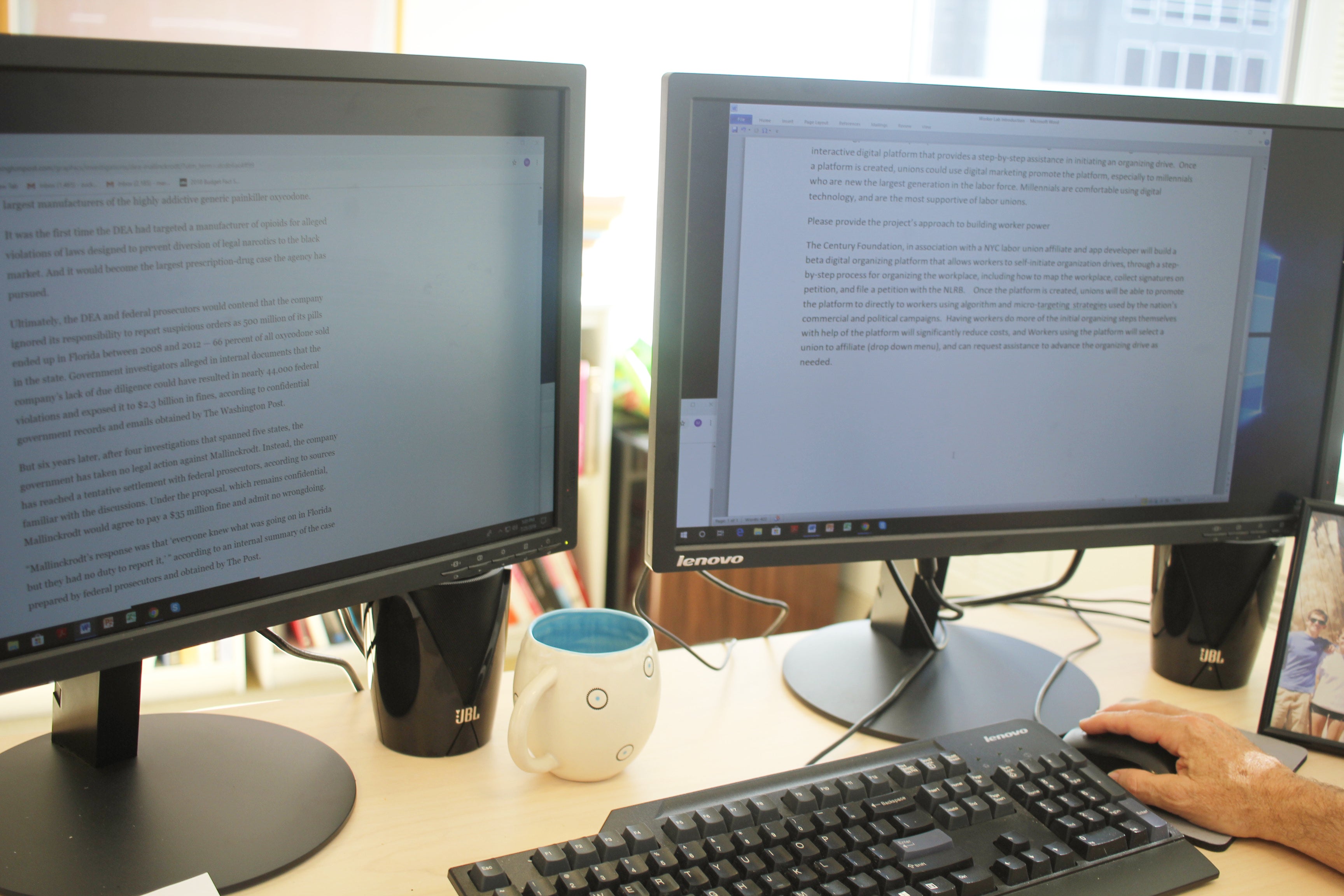 What music do you listen to?

My wife, Polly. She’s taught me so much about how to be a good leader and strategist.

What’s the best advice you have ever received?

Treat people decently, because it’s the right thing to do and it pays off in every way imaginable.

I work hard to get myself out of the day-to-day minutiae — the Twitter back-and-forths and constant crises that seem to define our politics today — and focus more on the big picture, to do forward-planning for the 3- and 6 and 12-months ahead. I’m a political junkie, so it’s admittedly hard at times to not get sucked into the vortex that is 24-hour cable news.

But one of the nice things about working at a think tank — and really, one of the responsibilities of a think tank, as I see it — is that we’re capable of being above the daily political fray. We’re able to take some distance, and focus on laying the groundwork for policy change down the road, sometimes two or five or even ten years down the road, in ways that people putting out fires all day long can’t really do.

Of course, that type of advanced, forward-looking planning is easier said than done. But it’s incredibly important to the success of our work, and something I try hard to prioritise.