How To Take Better Nighttime Photos With Your Smartphone

Smartphone cameras perform so much better than they used to, but they’re still a bit limited when it comes to nighttime photography. Whether you’re snapping photos in a bar or outside under the moonlight, your phone’s camera sensor is probably still too small to perform on par with a full-size camera.

That doesn’t mean it can’t shoot in the dark, however. Many new smartphones like the Google Pixel 3 and the Samsung Galaxy S10 come with bonafide night modes. Other phones tend to include a manual mode, which allows you to individually adjust elements like the exposure or shutter speed of a photo before you snap it. Even the iPhone XS lets you make a few tweaks to help take better night time photos. All you need is a bit of patience and time to dig into the settings. 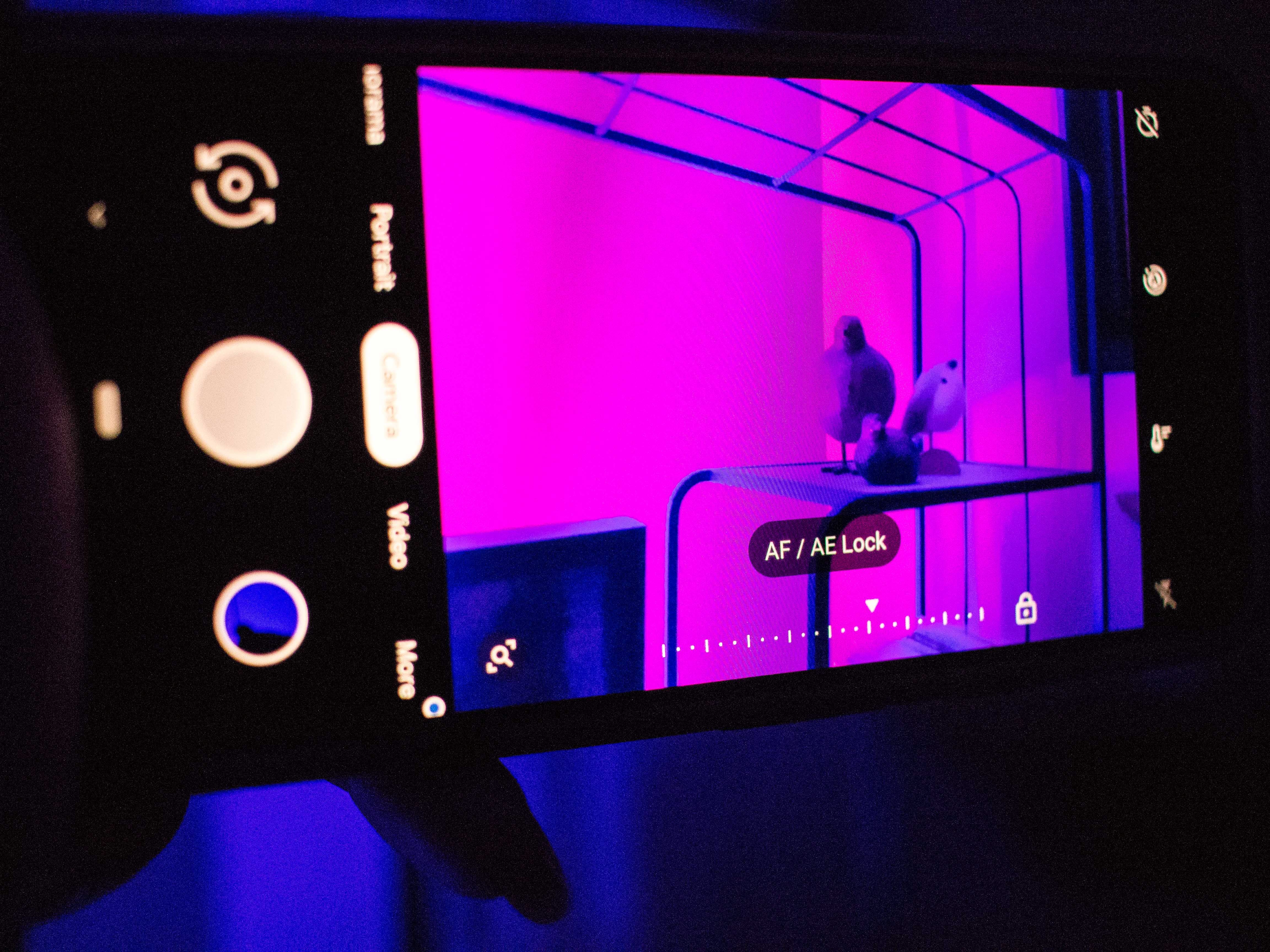 Since the iPhone doesn’t have a dedicated night shooting mode, your best bet for low light photos is to adjust the exposure. You don’t need to increase it to take the picture either; in most cases, a lower exposure will produce a better-looking product. A lower exposure requires a faster shutter speed, so the sensor isn’t taking in as much light. In turn, this helps produce clearer photos in low light conditions because it’s not trying to illuminate the entire scene. 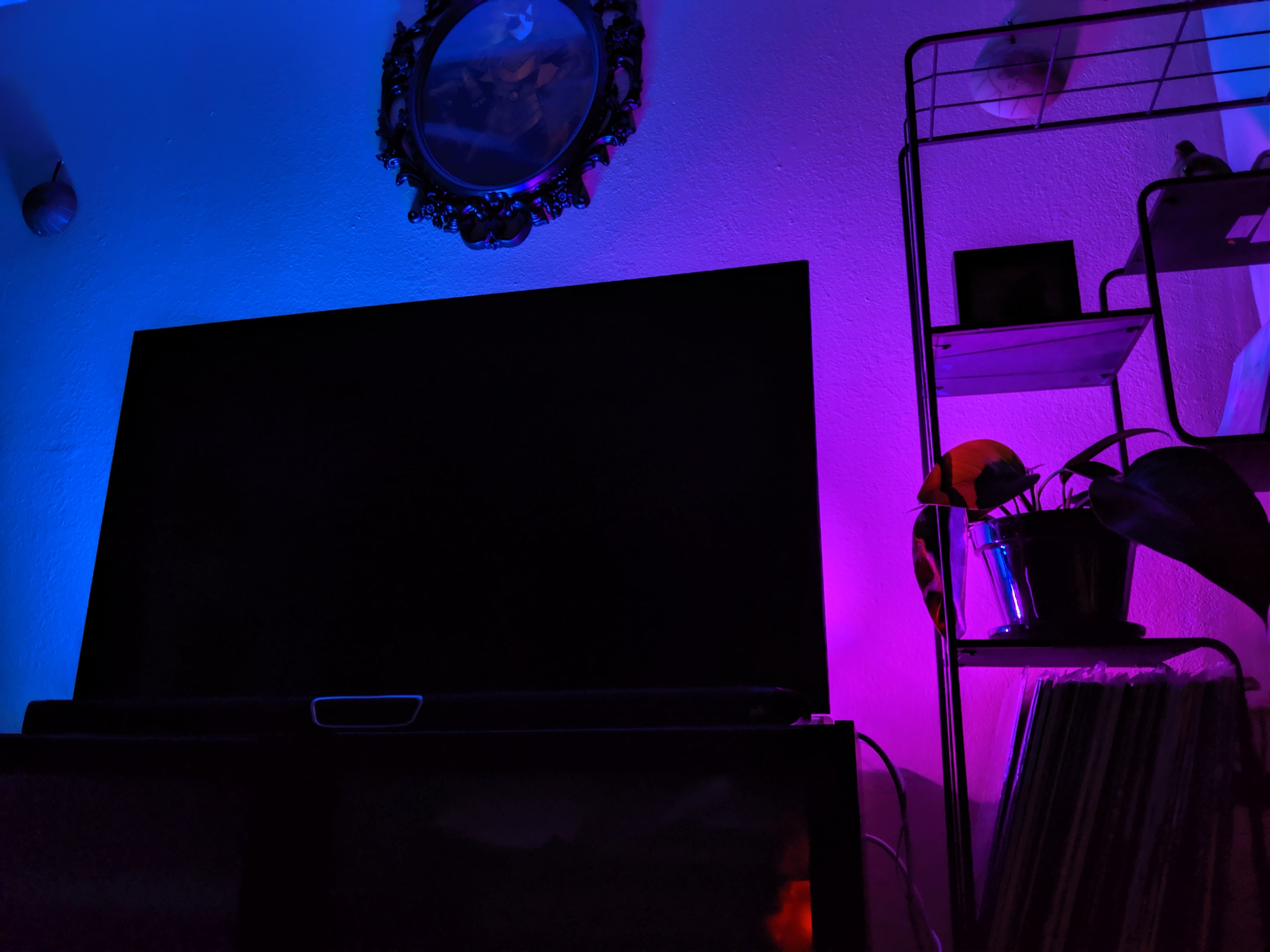 By chasing available light, you can compose an abstract photo. (Photo: Florence Ion)

Some of my favourite photos snapped with a smartphone happened when I chased the light. Using any available light to your advantage — a street lamp, candlelight, or a colourful bulb off to the side — can help produce a cool, abstract photo. In low light, darkness acts as a backdrop on which you can isolate shapes and objects. It’s the perfect recipe for a moody scene.

You can also your phone’s rear flash to help shape the scene. If you’re worried about overexposure, try diffusing it by placing a tissue or a sheet of paper over the light.

Learn to use night mode 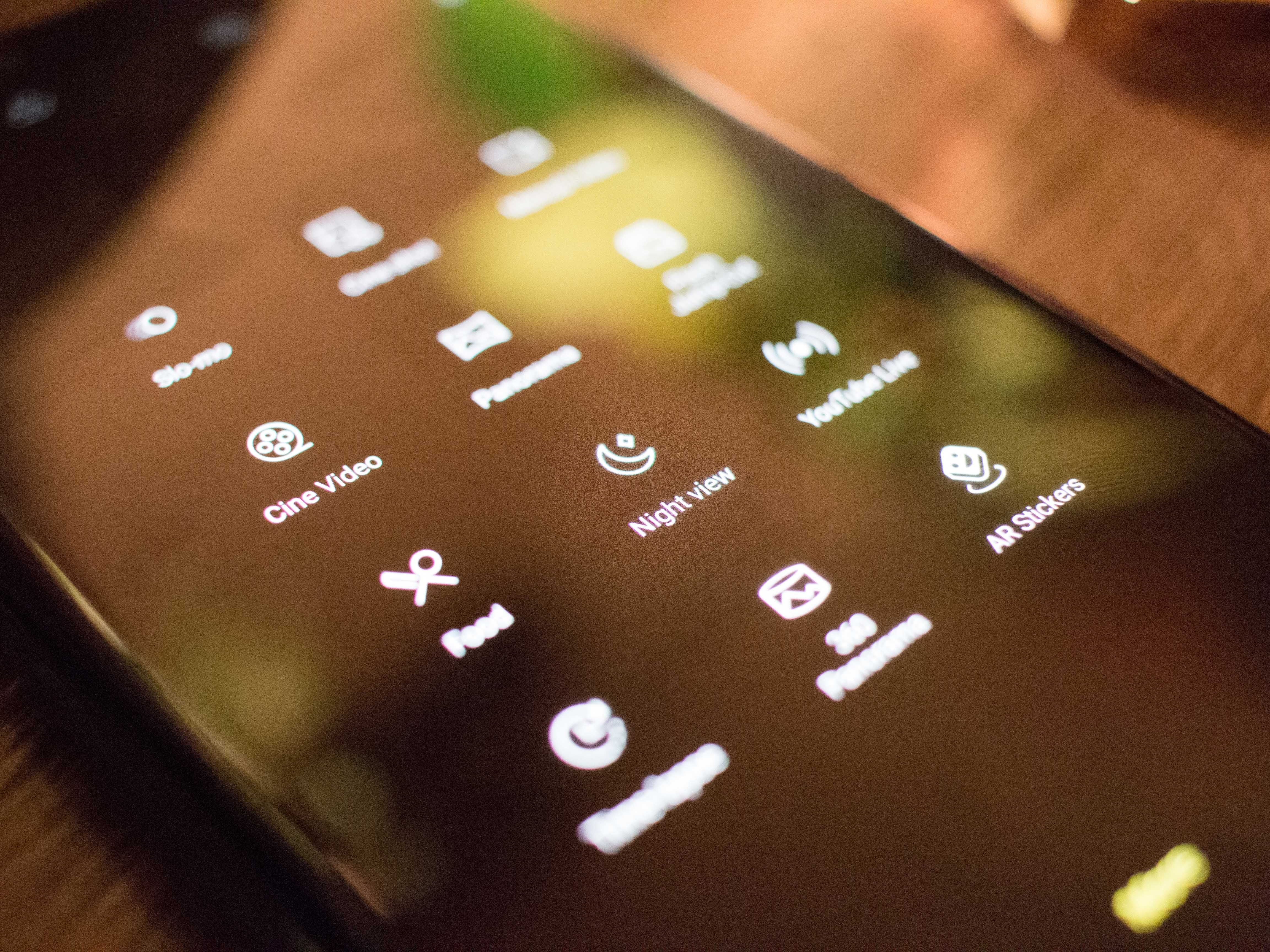 Whatever your phone’s version of night mode is called, get into the habit of using it after dark. (Photo: Florence Ion)

Most marquee smartphones come equipped with a night mode built into the native camera app. Night mode works by taking multiple exposures and then combining the information from each of the shots to help produce what the computer deems a well-lit photo without much noise.

Night mode isn’t typically on by default. On the Pixel 3 and 3a, the camera app will suggest you try out its version — called Night Sight — when it notices you’re taking a photo in low light. You can also manually access the feature by tapping on “More” in the camera app, then selecting Night Sight.

If it’s too dark to focus, try using the built-in exposure lock available in the upper right-hand of the screen. Once that’s set up, press the shutter button to take the photo. Be sure to stay still, as the shutter stays longer in this particular mode in an attempt to capture all that it can.

You could also try using the three-second timer available on the left side of the camera interface to allow yourself a moment of composure before it captures anything. On other Android devices, if there’s a dedicated night mode, you’ll see it pop up in the options on the main camera interface.

In the case of night mode, standing perfectly still with the smartphone in hand is the best way to get a clear shot in the dark. Try propping up the phone against a stable surface. Or, if you’re serious about keeping that shutter open, invest in a smartphone tripod like the LOHA. 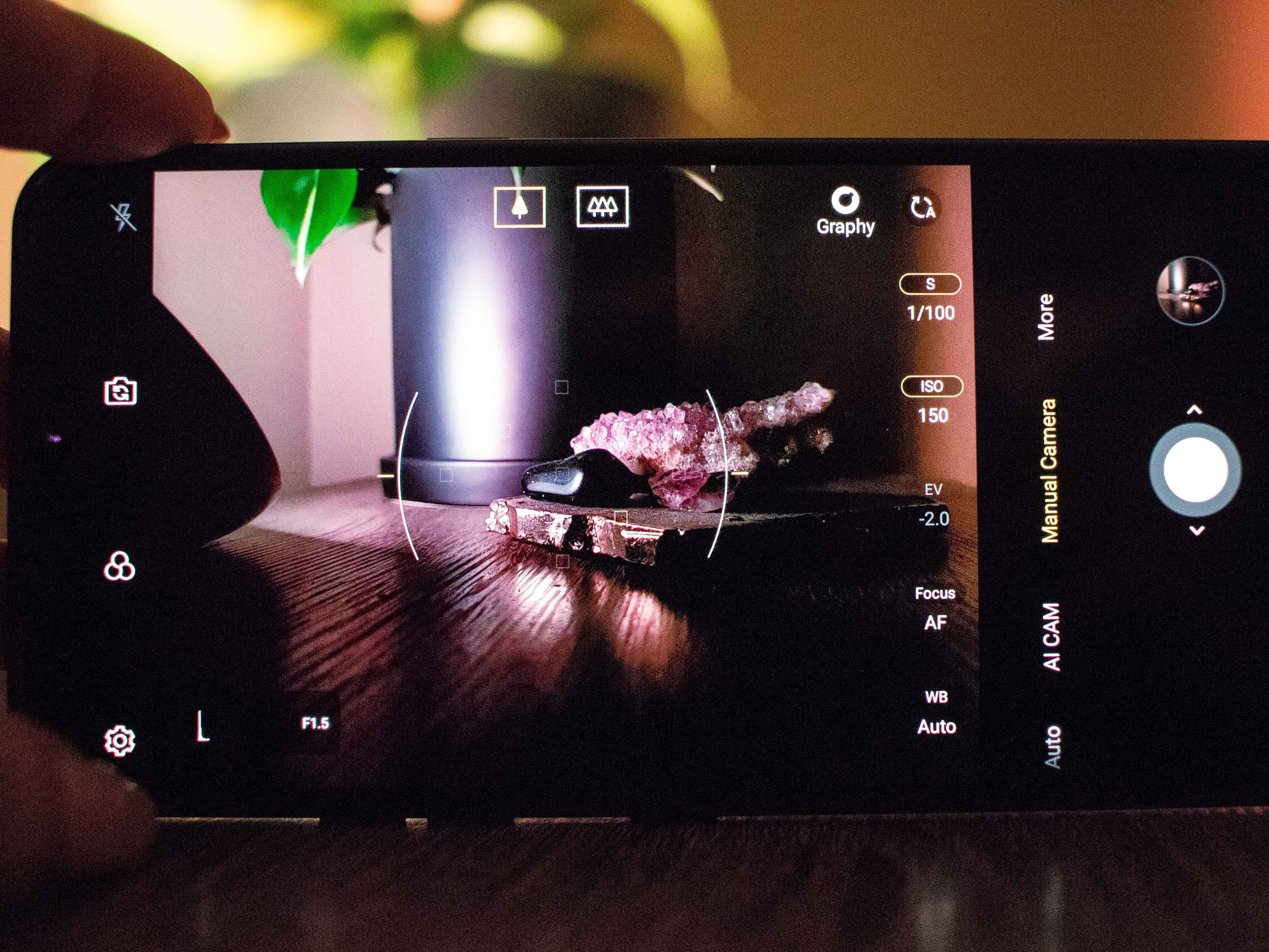 If your smartphone offers a manual mode, you can adjust the shutter speed for long exposures. (Photo: Florence Ion)

If your smartphone doesn’t feature a night mode, check your camera settings for a manual mode bundled into the software. On devices like the LG G8 ThinQ, this mode allows you to individually adjust the exposure, ISO, and shutter speed, all of which will help you in composing a low light photo.

Pay particular attention to the shutter speed, which is your key for shooting scenes like the night sky. The longer you keep the shutter speed open, the more light the smartphone camera sensors can take in

For best results, use the manual mode, or “Pro” mode as it’s called on some models, with the aid of a smartphone tripod. The manual mode typically shows the result of your adjustments directly in the viewfinder. 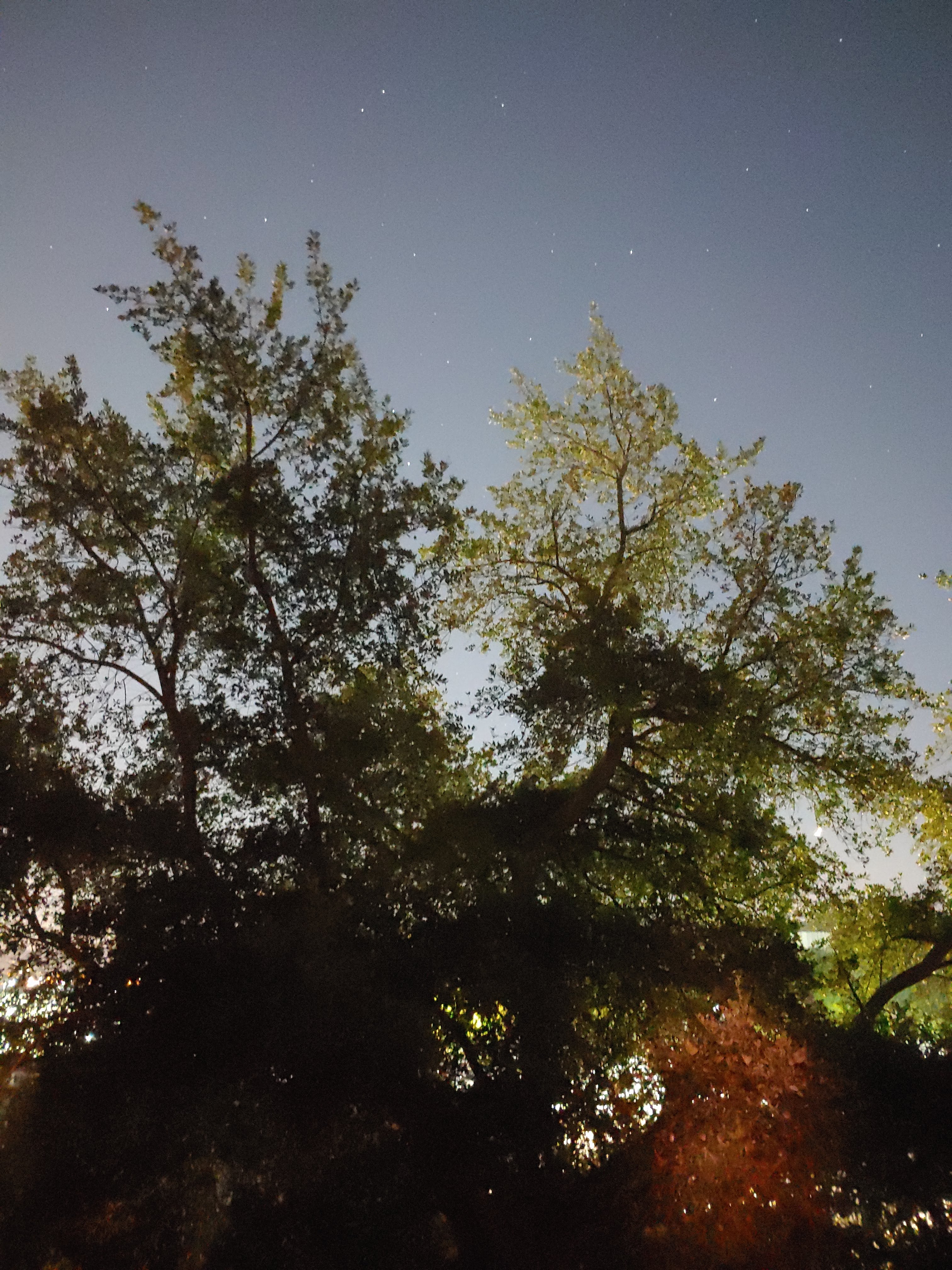 Even a three-second exposure can capture so much of the night sky. This was taken at 10 PM. (Photo: Florence Ion)

The iPhone offers some manual controls directly in its camera interface, though they’re limited to focus and exposure. If you want to take a long exposure shot, you can do so with the Live Photo mode. At night, this feature can help capture fireworks overhead or bright neon lights.

If there are no manual camera settings available for your smartphone, try a third-party app. On Android, go for a tried-and-true app like Camera MX, or one of the newer players called Footej Camera.

Both of these apps offer individual control over elements of the photo before you shoot it, including a live viewfinder. On the iPhone, Moment – Pro Camera, developed by the mobile camera lens makers, and the long-time veteran, Pro Camera, are both full-featured manual camera apps with video support and other extras. You can use either app to shoot in RAW format, too, which is particularly helpful when it comes to editing night time photos after the fact.

The hot trend in smartphones these days is bundling in different rear-camera lenses. If your smartphone comes with multiple cameras, make sure you’re shooting with the right one.

On the iPhone X and XS, you have a wide-angle and telephoto lens, though they’re both equipped with Optical Image Stabilisation and can handle nighttime situations. But on devices like the Galaxy S10 and S10+, there are three rear cameras, including both a wide-angle lens and a telephoto lens. In this case, the latter two feature a smaller aperture and can’t take in the same amount of light as the primary camera.

Both apps support RAW image processing, so you can take those data-laden photos and tweak them to your liking. Both apps also support noise reduction, which helps smooth out the details of a darkly-lit picture so that it doesn’t appear overly grainy. Of course, your mileage may vary with these particular editing features, as your smartphone’s camera sensor ultimately determines your final product.