This Chrome Extension Makes Netflix Look Like A Conference Call

Sometimes you want to watch Netflix, but need that watching to be on the discrete side. Or instance, maybe it would help if your computer’s screen looked like you were on a conference call talking to people in another office rather than watch The Office.

Netflix Hangouts is a Chrome extension that does just that.

Once installed, the extension loads up what looks to be a conference call with three colleagues, the fourth being whatever it is you want to watch on Netflix.

The sales pitch from the extension’s creators is that you catch watch Netflix at work using it. While technically, yes, it could be used for that purpose, my guess is you won’t be able to go super far with it. It’s only a matter of time before someone from your office walks by and realises that you don’t have a conference call on your schedule and the people on your screen aren’t actually coworkers. 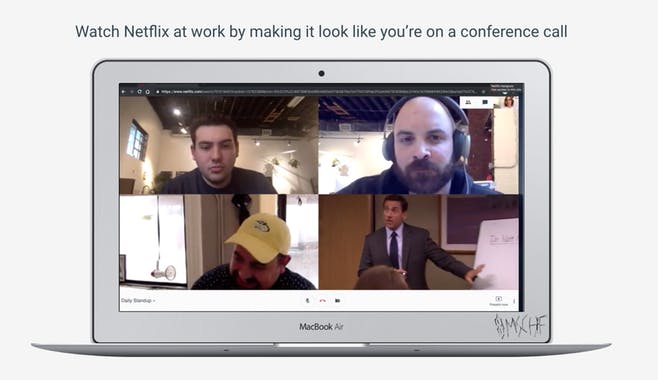 That said, it’s a pretty fun trick, and if you do find yourself in a situation where a fake conference call can let you watch Netflix freely, it might be just what the binge-doctor ordered.