How To Memorise Anything

Typical study methods like lectures, cramming, and re-reading are ineffective. According to scientific research, they don’t help students retain information over the long term. What works is spaced repetition.

“You test yourself on a fact repeatedly, spacing out your repetitions over time.” Coder and writer Nicky Case explains further in their interactive comic How to Remember Anything Forever-ish. This half-hour-long web comic, complete with flash cards, is probably the funniest thing ever written about study techniques. Here are the four most important lessons.

How to break anything down into memorisable facts

To study a set of knowledge, you need to break it down into its constituent facts. In their comic, Case gives a great example using mitochondria, the powerhouse of the cell. (To find it, search the page for “sucks.”) Say you need to learn all of this:

This organelle is called “mitochondria”. Mitochondria is the powerhouse of the cell. They’re found in almost all eukaryotic (nucleus-having) organisms. The most widely-accepted hypothesis for the origin of mitochondria is Endosymbiotic Theory: around ~1.5 billion years ago, a prokaryotic (nucleus-lacking) cell that was “eaten” by another cell, somehow survived, and has continued to live inside them ever since.

That’s at least eight different facts. You need to break them up and study each one. The best way to do that—the best way to turn most knowledge into something you can study—is with flash cards.

I like to memorise quotations, which are a little harder to break down into flash cards. But it’s still possible, using the “cloze deletion” method: On each card, leave out a different part of the quotation. Study all of them, on the right schedule, and eventually you’ll memorise the entire quotation.

How to make a good flash card

A good flash card should include pictures, sounds, or personal details, says Case. To learn words in another language, match them to pictures. Make those pictures personal. To learn the French word for cat, Case drew this card featuring their own cat Stripes: 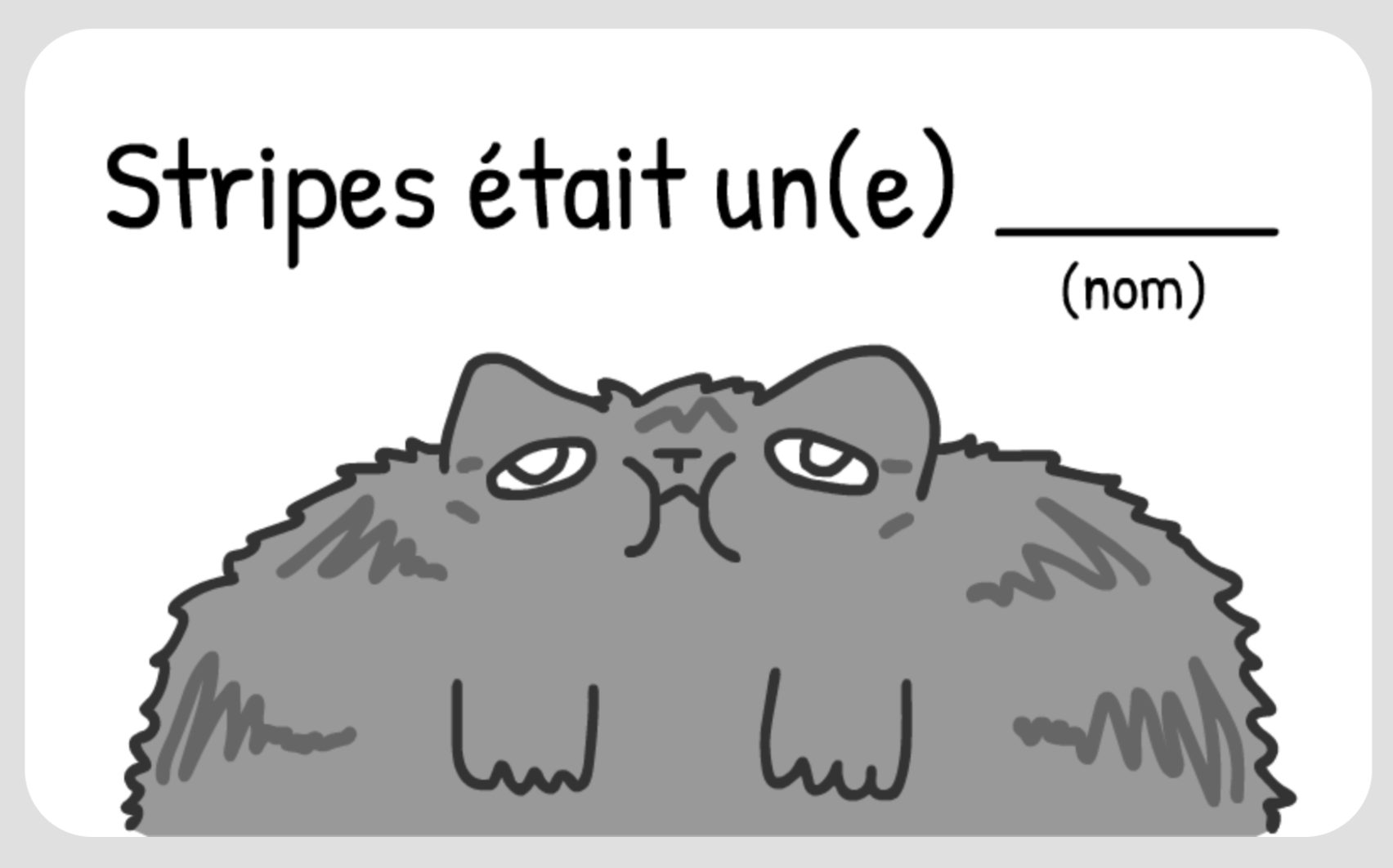 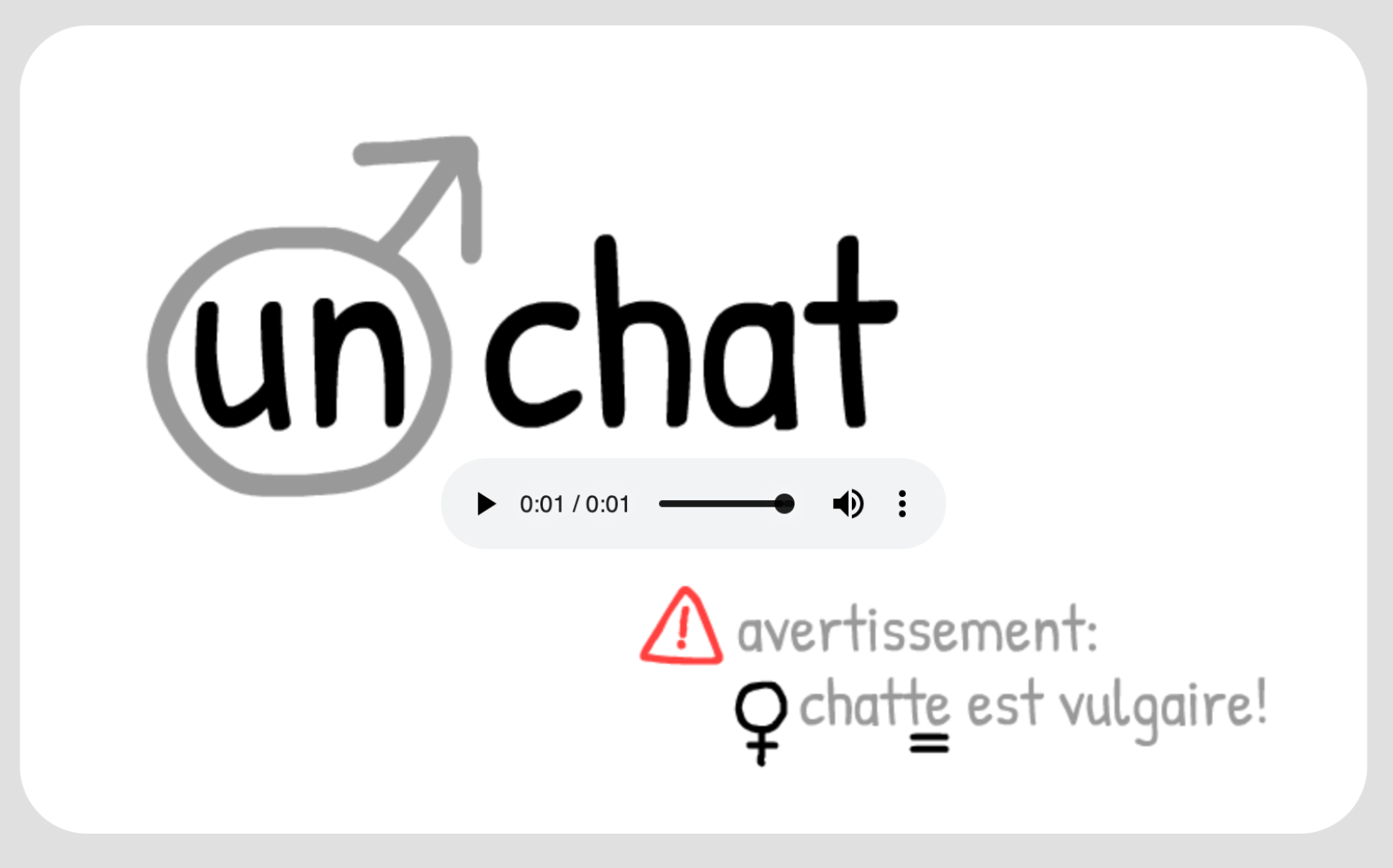 This card might look complicated. It’s teaching the word, the gender of that word, and the pronunciation. But because this information is presented as one package, and belongs together, it still works. There’s even room for a little warning that the gender really matters here, because une chatte can mean something else entirely, just as a certain English word for cat has a vulgar meaning.

How to use spaced repetition

If you want to remember something for a long time, says Case, you need to study it at the right moment: the moment that you’re just about to forget it. If you do that repeatedly, you’ll remember the fact longer each time. A good pattern, supported by over a century of research, is to make a card, study it the next day, then study it two days later, then four days later, then eight days later, and so on.

Do this seven times, and if you got the card right every time, you can throw it away. You’re probably going to remember that fact forever. But any time you get the card wrong, you have to start over: study it again tomorrow, then two days after that, and so on. Eventually you’ll get it right all seven times, and you’re done with the card.

If you’re studying a lot of cards at once, this study schedule gets complex. Case has a diagram of the schedule, which you can print out if you’re using physical flash cards. But if you use a flash card app, several of them have spaced repetition built in, so they can automatically schedule your cards.

If you keep screwing up a card, then see if you can break the card down into multiple cards, or make it more memorable with a picture or a hint.

How to choose a study app

There are tons of flash card apps. Some are free, some cost a lump sum, and some sell subscriptions. They all work a little differently, so you can choose based on your study habits, device and OS, or aesthetics.

Case recommends Tinycards (free on all platforms) and Anki (free on desktop and Android, $US25 ($36) on iOS). Both have built-in spaced repetition. Tinycards offers additional study methods like multiple choice, typing in your answer, or taking a quiz.

Or find your own favourite app. Lifehacker has reviewed many of them:

You should probably make your own cards. A lot of apps let users share card sets, but most sets are poorly made. The exception is the official sets from Tinycards, which include cute stylised illustrations. If you’ve ever used Duolingo, they’ll look familiar—both apps are from the same company.

How to use what you learn

Between studying flash cards, put those facts to work. Memorise guitar chords, then play a song; memorise words, then have a conversation or write an essay. This helps you memorise facts better, but more importantly, it turns them into skills.

That’s what all those creative school projects are about: turning laws of physics into a working rocket, or turning a list of constitutional amendments into an appreciation for the evolution of federal law. Knowledge is like IKEA furniture. To move it off the page and into your brain, you have to break it down into facts. To use it in real life, you have to put it back together.

Real-life usage is also a good test of whether you’re studying the right information. If you can’t find a way to apply it, why are you learning it? (If you ask this question to your teacher or professor, do it sincerely. Give them the chance to show you what your knowledge can do in the real world. Even the most theoretical concepts have found surprising uses.) Conversely, if you find yourself struggling to practice a real-world skill, use flash cards to bolster that practice.

To learn more about memorization, read Case’s comic. It even tests you on the material—with flash cards.