How Australians Can Use Tinder’s New LGBTQI+ Safety Feature [Updated]

Tinder has announced a new feature promising to include better safety for users who identify as LGBTQI+. Here’s what you need to know and how you can use it.

While many Western countries have made strides in the acceptance of the LGBTQI+ community, unfortunately, there are still many places around the world that aren’t so safe for anyone a part of the LGBTQI+ community. In fact, there are 68 countries, according to Human Rights Watch, who still have laws criminalising same-sex relations while a further nine have criminalised forms of gender expression.

Tinder has introduced the Traveller Alert feature, according to a statement on its website., which will LGBTQI+ alert users when they’ve entered a country still with laws directly affecting their identity. It works by alerting users when they open the app within a specific country and will also automatically hide their profiles until they decide to undo the feature.

Tinder confirmed with Lifehacker Australia they’re working with the International Lesbian, Gay, Bisexual, Trans and Intersex Association (ILGA) to manage which countries the alert will appear in for users.

“Tinder will be able to update the list of countries should there be any changes across the world,” the spokesperson said.

If the user decides to make their profile public again in one of the listed countries, their sexual orientation and gender identity will be temporarily hidden. 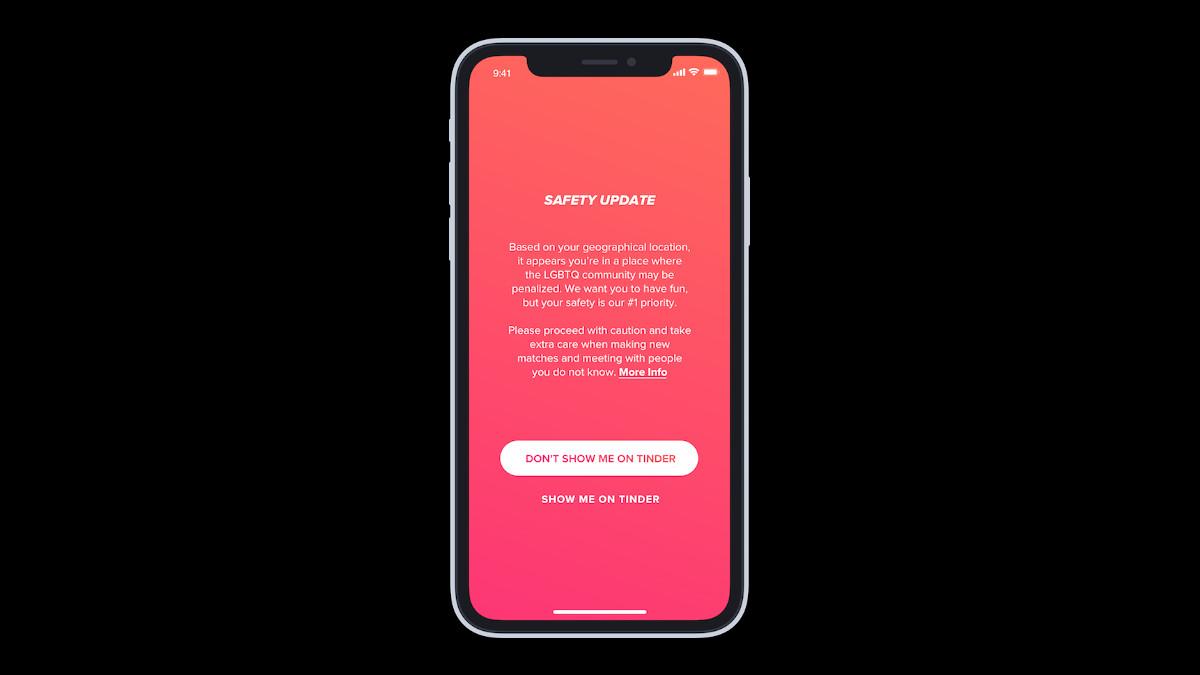 Tinder’s CEO Eli Seidman said in the statement, the feature is first of more steps to protecting users as they travel to other regions of the world.

“It is unthinkable that, in 2019, there are still countries with legislation in place that deprives people of this basic right,” Seidman said.

When can I get it?

Tinder confirmed with Lifehacker Australia the updates will be available for Australian users in the coming days. Those who would like to access the features will need to update their version of Tinder when it becomes available on the Apple and Google Play stores.

How To Spot A Fake Profile On Tinder

Tinder has become a feeding ground for scammers creating fake profiles solely for the purpose of extracting money from users. Here are some tips to help you weed out the fakers on Tinder.