How To Recover Deleted Files With Free Software

The computer ate my term paper! We’ve all been there. You delete an important file — maybe even shift-delete it by accident (on Windows) — or you forget about it until that split-second after you clear out your Recycle Bin or Trash. It’s gone forever, right?

Before you summon the most epic of freakouts, there’s a very good chance that your file is still alive and kicking somewhere on your hard drive — you just need to know how to find it. With the right tools, recovering that deleted file can be as simple as a few clicks of your mouse.

Part I: The Overview 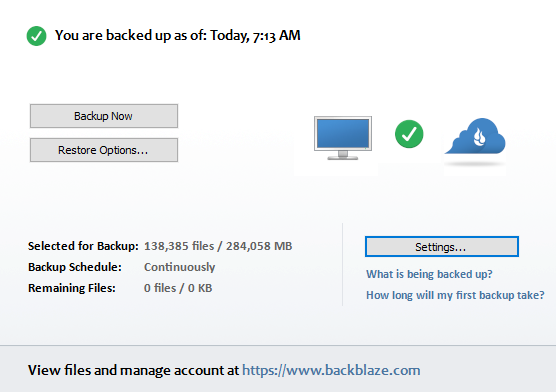 Before you go into full-on file recovery mode, take a second to double-check the folder you saved the file in, as well as the Recycle Bin or Trash. Also, think about your setup: Do you have any backups stored elsewhere? Is an application such as OneDrive, iCloud, Backblaze or Google Backup and Sync automatically saving everything you do to the cloud?

If so, you might be able to restore a recent (or slightly older) version of your file from there, instead of going through more complicated steps.

Otherwise, you’ll need to turn to a file-recovery application to help out.

When your operating system deletes a file, all it really does is mark the space on your hard drive that your file occupies as free space. It’s still there, but your computer is now perfectly happy to write new data on top of it — at which point the file recovery process becomes a lot more difficult. That means you should do as little computing as possible until you find the file you’re looking for, since your chances of recovering the file go down every time your computer writes information to drive. 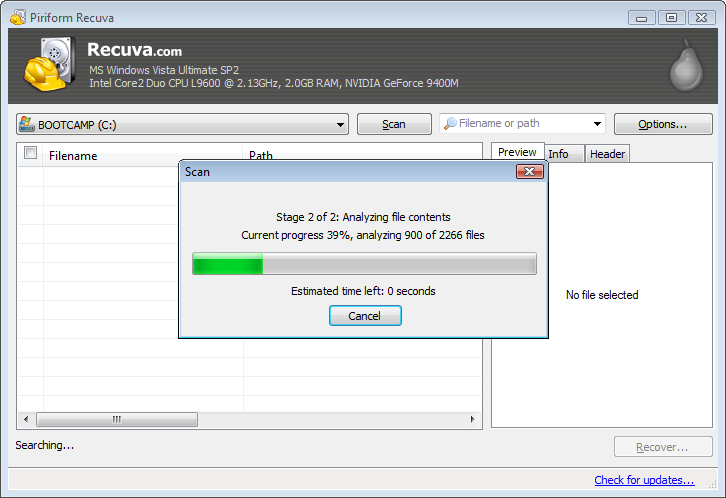 Windows: You have a lot of great open-source and freeware options for file recovery if you’re running Windows. We’re big fans of Recuva, which has both free and pro versions, but you should also consider EaseUS Data Recovery Wizard (2GB limit for the free version), and PhotoRec. Between these three apps, odds are good you’ll be able to save whatever it was you deleted — and, yes, you’ll want to try different apps if one doesn’t find what you deleted. Don’t give up!

Mac: You can also get a free version of EaseUS Data Recovery Wizard for the Mac — same 2GB limit as before, unless you pay up.

Beyond that, PhotoRec is also available for Mac, as is the open-source tool TestDisk. You can also try out Disk Drill, though I believe it needs to be running before you delete your file (for the free version, at least).

Once you’ve picked a tool, it’s time to scan your hard drive for your lost file or files. This process varies depending on the app you’re using, but it’s pretty similar for all of them: Just point the program at the hard drive or folder that was holding your missing file and start your scan.

Once the scan is complete, you’re going to see a big list of jumbled file names. Often most of these files are nothing more than system files that your operating system has created in the course of basic operation, and you won’t need to worry about them. You’re just looking for the file type and name that matches what you’ve lost.

Once you find what you’re looking for, select it and pick the option to restore it, however you do that in each individual app. As mentioned, if you didn’t find anything with one application, try another — and another. Don’t give up until you’ve exhausted a few, because you might be able to extract success from (early) failure if you’re persistent.

Above, you got a basic overview for recovering deleted files from your computer. Now we’ll take a closer look at some more specific problems, methods of data recovery, and tools that may be of help in your quest for your elusive lost data.

Recover files from a wiped or unbootable hard drive

So you didn’t just accidentally delete a file or two and empty your Recycle Bin prematurely — instead you’re dealing with a whole hard drive worth of missing data. First, you’ll want to stop using the drive, as we mentioned earlier.

If your system’s primary drive went kaput, stop trying to boot up your PC. Remove the drive from your laptop or desktop (if you can), slap it in an external enclosure, and use another computer to try and restore its precious contents. Many of the apps we previously mentioned should work just fine for your damaged or deleted drive. 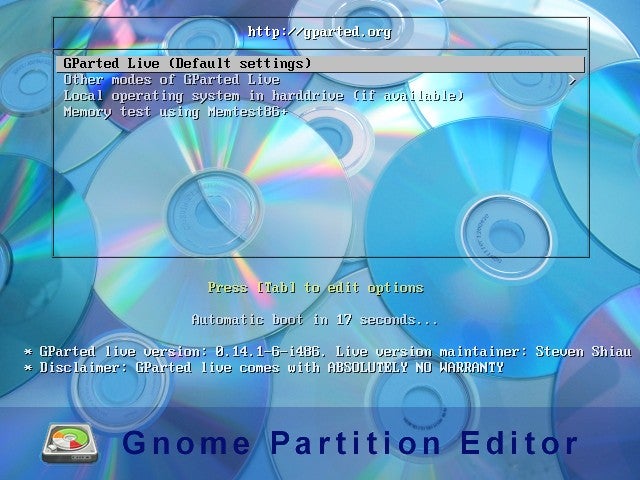 If you can’t remove the drive, or don’t have any other computers you can use (or borrow) to help out, you can try using something like the [email protected] LiveCD, any other Live CD that comes with the TestDisk recovery tool. You’ll boot onto one of those instead of your primary hard drive, and you’ll hopefully be able to recover your files that way.

(That all said, this is a perfect example of why it’s critical for you to back up your important files elsewhere — ideally the cloud, so all you’ll lose in a hard drive failure is the time it takes you to buy a new one, reinstall windows, reinstall your apps, and re-download your critical stuff.) 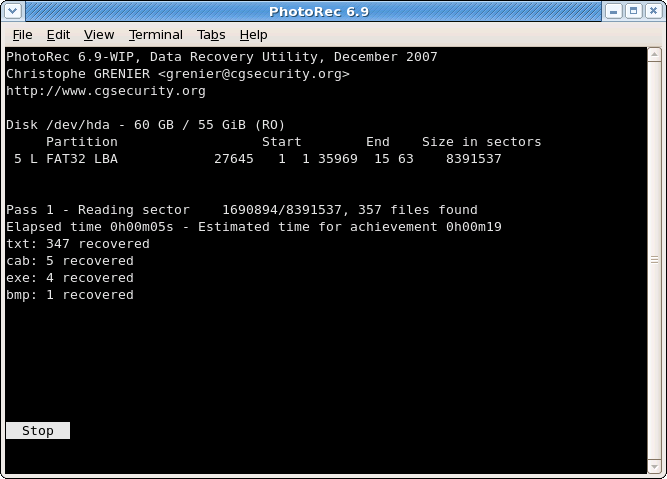 If you need to resurrect photos from a damaged flash memory card from your digital camera, you’ll be happy to know that most of the applications listed in part one above will do the trick — you just need plug in your camera or insert the card into your computer’s card reader before running your data recovery application of choice. (I would try PhotoRec first, then the other apps as needed.)

Assuming you didn’t lose the files due to some weird mechanical issue, your best bet to stay safe going forward is to make sure you’re importing photos as soon as you plug in your camera (or card reader). You can set this up in Windows or macOS directly, and there are plenty of other apps — like Dropbox or Google Backup and Sync — that will be more than happy to send your files to the (safer) cloud the moment you plug in your device.

If your lost dissertation was saved as a Word document, you’ve got a few more interesting options for getting to your lost or deleted documents. Acronis has a great tutorial about the major ways Word allows you to recover that which you accidentally delete (or lost), as does Microsoft itself — absolutely worth reading before you start to panic. And, as James Konik notes over at Cloudwards:

“You can try hunting for files with the “asd” extension, too. They are the temporary files Word uses to store your work as you go, but before you save. If you can locate them, Word should be able to open and restore at least some of your lost data.”

People still use CDs/DVDs? In case you’re in the minority — you still have access to an optical drive (built-in or external) on your computer — you have a few options for recovering data on scratched, old, or otherwise problematic CDs and DVDs. First off, though, resist the urge to wipe them with a banana. Yes, people do that.

If you’re trying to rip data from an audio CD, give the freeware app Exact Audio Copy a try. If it doesn’t give you results on your optical drive, try out the same CD and app on a different optical drive — likely a friend’s, since I doubt you have multiple drives sitting around. Otherwise, you can try the Live CD route once again, and boot into something like SystemRescueCD (on a flash drive) and use its built-in ddrescue tool to extract whatever you can from your scratched media.

Though it’s nearly a decade old at this point, an number of people also swear by Roadkil’s Unstoppable Copier as a great app for dumping your scratched disc’s contents. If that doesn’t work, and you’re out of options, you could always try polishing your disc as best as you can to see if that fixes the issue. A number of people have come up with different techniques for resuscitating your scratched disc:

Whatever the cause of your lost file, the best method of data recovery is a good preemptive data backup plan. If you’re on Windows, you have plenty of options for creating multiple copies of your critical data, ensuring that an accidental deletion is more a nuisance than a catastrophe going forward:

We are scratching our collective heads as to how the Windows 10 October Update ever made it past Microsoft’s QA teams. According to numerous reports, something about the update could delete the contents of your Windows 10 user folders — you know, your documents, photos, music, videos and so on.

Back Up And Clone Your Hard Drive With Macrium Reflect

This app isn't something you'll probably have to use very often -- we hope -- but it's a great tool if you're upgrading your system and need to move everything from an old hard drive to a new drive.

On macOS, Time Machine is your friend — as are iCloud backups. You can also use the same third-party services Windows users can partake in.

All The Folders You Can Probably Exclude From Your Mac's Backups

Whether you're backing up your Mac with Time Machine or another service, it can be an incredibly time-consuming process. Over at How-To Geek, they walk through a number of the folders you can probably skip if you need to get that backup done quickly.

Whatever you decide on, make sure you pick something so your data is safely replicated elsewhere. I always recommend a three-pronged approach: Keep a physical backup you can readily access, like a separate drive or external storage device, even if you update its contents sparingly (once a month, let’s say).

Use some kind of cloud backup tool or service — plenty of free and cheap options are available — to also store your more critical files, even if you don’t update them regularly.

Finally, pay for some kind of always-on backup service that syncs your work to the cloud, so even a quick oopsie (or shift-delete) will only cost you a few minutes to restore the file, not the hours you otherwise spent updating your document or presentation.