How To Find Out If Your Airbnb Is Legal

In January, the city of New York filed a $US21 million ($30 million) lawsuit against a ring of real estate brokers illegally renting out properties in the city to over 75,000 guests on Airbnb. In Barcelona, Spain, the government has shut down more than 2000 listings and warned tourists to check the legality of their rental properties before travelling.

And in many, many other major cities, the home-rental site is facing similarly strict regulations.

Before you book an Airbnb, you may have asked yourself: Is my rental actually legal? Well, that depends entirely on your destination.

Cities such as LA and Paris do allow for Airbnbs under certain circumstances, and put a cap of 120 days on hosts renting out apartments. Hosts face the task of meeting all of the legal and regulatory responsibilities in the end, though it isn’t technically necessary. (Just because it’s on the site doesn’t mean it’s legal.)

Take Photos Of Your Airbnb Before Leaving

More and more, it seems like booking a rental through Airbnb is a risky proposition. Now, thanks to one traveller’s story, we know to look out for rental owners who claim that you’ve caused damage to their property — damage that could result in thousands of dollars of fees.

“In most cases, the law does not consider the traveller the offender — rather it considers the host the offender — so you are mostly in the clear,” writes Smarter Travel’s Ed Hewitt.

“That won’t help if you experience a raid in the middle of your stay, however, or if you are subject to a more prosaic ejection, such as by the landlord — or even if you get the stink eye and a dressing down from unhappy neighbours.”

Do your research on local laws and ask for documentation

To avoid a raid or a nasty case of stink eye, your first step should be to research your destination’s policies on Airbnb to ensure it’s legal. A look through recent headlines should give you a good sense of existing laws. Here’s what a search of “New York City” and “Airbnb” looks like: 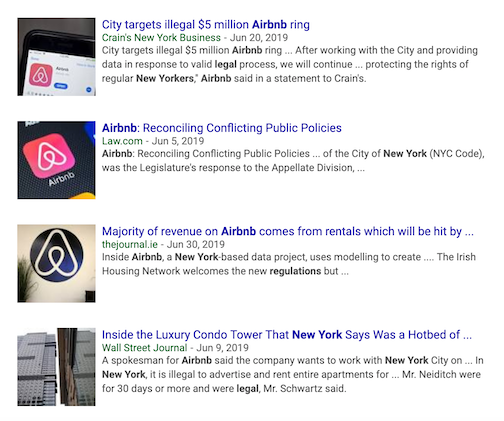 If it isn’t obvious already, New York City does not love Airbnb. (In fact, it’s illegal for most buildings to rent out properties for less than 30 days in NYC unless the tenant is present while renting.)

As Smarter Travel writes, most legal issues tend to arise in urban areas with condominiums or apartments which are more likely to be filled with renters or subletters rather than actual owners.

Condo associations, for example, might have a stricter set of policies on those who are renting out their own rental properties. You might run into less trouble while dealing with homeowners and searching for listings in more rural areas for this reason.

After making a reservation, you should also request legal documentation from a host during those requested dates. (It might seem offensive, but if you’re visiting a city with strict laws, a host should understand this request.)

If you’re specifically told not to contact or speak with a building manager or anyone in the building in advance of your visit, that might also be a red flag to avoid.

And if it isn’t legal, you do have a few options; you could stay and deal with any consequences or just decide to cancel and obtain a refund, but the amount you receive is dependent on your host’s cancellation policy. (If you cancel within 48 hours of booking, however, you should receive a full refund.)

You might also qualify for a full refund under certain extenuating circumstances, which doesn’t explicitly cover illegal listings, but you can contact Airbnb’s resolution centre for more information.