How To Figure Out When Personal Finance Advice Is Nonsense

The press release that sent me over the edge was the one that mentioned lattes and how few people are prepared for a $400 emergency. “Where’s my bingo card?” I joked.

And before I knew it, I had created an entire bingo card full of personal finance buzzwords and other phrases that often irk me when I open my inbox. Mark off a whole row, I decided, and I could drink a beer at my desk in the afternoon. (Upon later reflection, this could be dangerous.)

It’s not that I’m ungrateful for thoughtful PR pitches and expert insights. For every weird or bad email I get, I get two good ones from fine professionals whose work I respect.

But a lot of what ends up in my inbox just gets me riled up about the personal finance information that gets shared online. If you’re someone who doesn’t happen to be an accountant, financial advisor, or economist, how can you discern what personal finance advice or data is worth latching on to, and which is bunk? Can’t we just eat our avocado toast in peace?

Let me tell you about a time I almost got fooled

A few years ago, a financial services comparison site sent me a few bullet points about a survey they’d done about how much people spend on holiday shopping.

The results were shocking: 57 per cent of those surveyed said they’ll spend a full paycheck on holiday-related expenses. The representative offered me the entire data set to look over, and sent me a detailed Excel workbook.

But when my editor and I took a closer look at the data, we realised that it had been skewed. That 57 per cent? It only included people who said they would spend at least one paycheck on their holiday expenses. It wasn’t a percentage of the total group.

And that’s a case where I actually saw the raw numbers and got to do my own calculations. Sometimes all you get is a press release with some bullet points. Sometimes you get a fluffy, pretty PDF that doesn’t tell you much. Sometimes pitches are about surveys about what people think they’ll do, rather than what they’ve actually done.

There’s a lot out there that just gets picked up and published and reported on without a second look at what information companies are trying to share.

Look at who conducted the research

Companies who run surveys aren’t necessarily nefarious, but they typically aren’t held to the same rigorous standards as an academic study. If the study is from academic researchers or government data, look for limitations that can affect the relevancy of the findings. Many academic studies leave researchers with more questions than answers, without a silver bullet to solve a problem.

Look for actions over feelings or predictions

Who cares if 500 people said they might spend money on something frivolous? Until they’ve done it, it doesn’t really matter for you.

Look at the sample size

A larger group of people doesn’t guarantee more accurate results, but it’s difficult to draw conclusions from, for instance, a group of 300 people who took an online survey. Who knows, maybe they only took that survey because they wanted to read an article from the newspaper back home and had to answer seven multiple-choice questions first. They really just wanted to know what their old buddy Bill got arrested for, they don’t care about that survey. Would you trust those results?!

Don’t you hate when all millennials get lumped under one assumption? What about when all baby boomers are categorised the same way? And where are the sweeping generalisations about Generation X? (Sorry, Gen X.) If a survey makes you feel crappy for being born during a particular generation, take a deep breath and close that browser tab.

Don’t change what you’re doing to manage your money or improve your financial health just because some survey says you should be doing something different. If something is working for you, stay the course.

And if you’re just not sure, consult my bingo card: 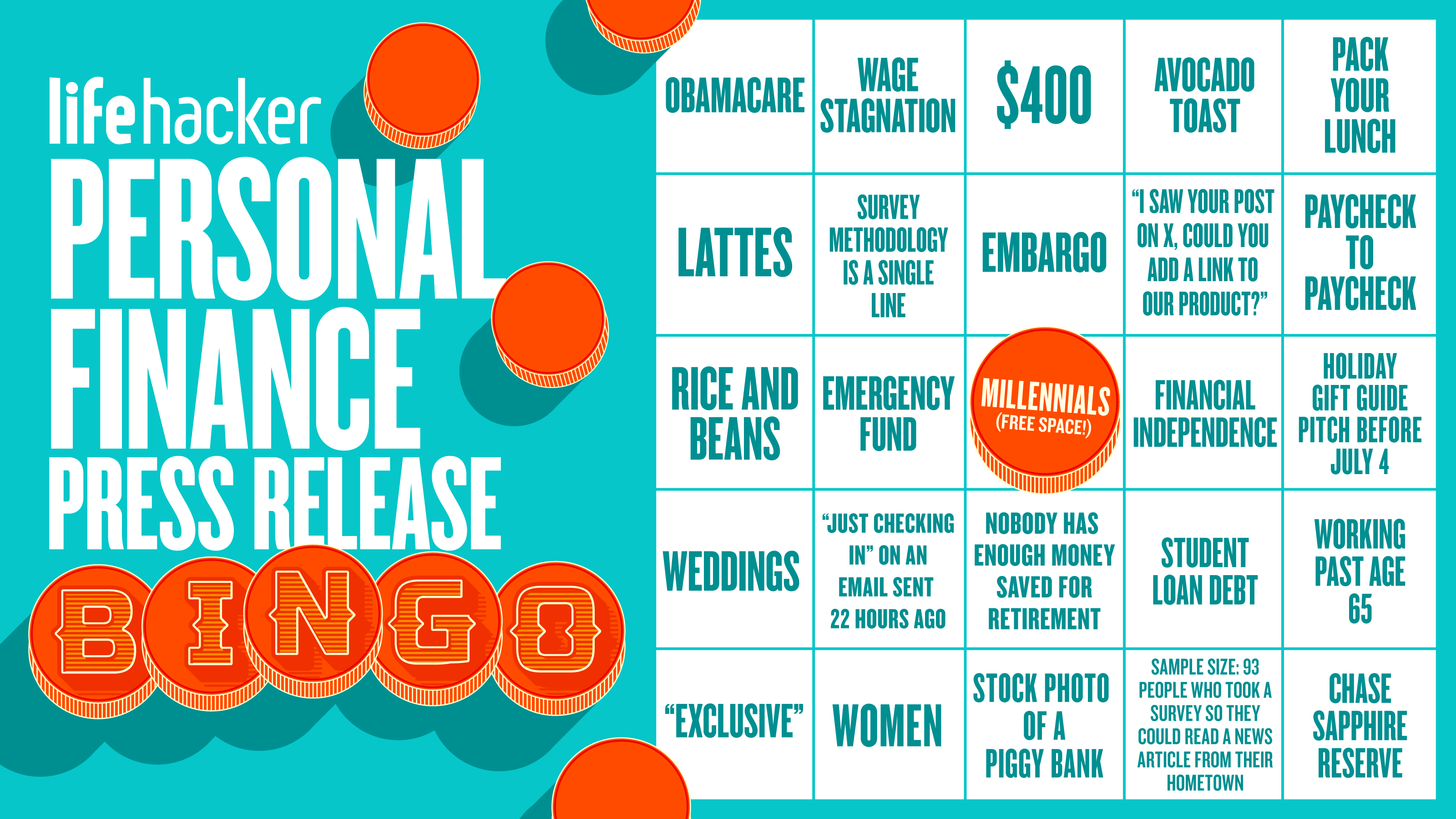 While some of these bingo slots are only relevant to our U.S. audience, I’m sure we’ve all heard about the need to cut down on our coffee and eat less avocado toast. And “nobody has enough money for retirement”? We’d be lucky to never hear that again.