This Dominican Chimi Casserole Is A Hungover Person’s Dream

I grew up like most other Dominicans I knew – with a large, social family that was never short on excuses for gatherings and last-minute visits. In my house, there was no such thing as cooking too much food, as it meant there would be leftovers for anyone who decided to drop by later that day. Or the day after. Or the day after that.

But the chimichurri burger, which shares a name with the Argentinian oil-based condiment, but nothing else, isn’t something you’ll find in a Dominican kitchen. Also known as “chimi,” the burgers are sold at street stands throughout the Dominican Republic and in predominantly Hispanic neighbourhoods throughout New York City in the U.S., where chimi trucks light up the late-night streets with their neon signage.

The chimi makes for a great casserole, whether you’re looking for a party dish to help soak up the liquor, or a cure for the next morning’s hangover. The burger version consists of a juicy ground pork or beef patty, shredded cabbage, tomatoes, and onions, all swimming in a special sauce between two slices of pan de agua (water bread), but we’ll be adding cheese to help keep the casserole together, and toasting and chopping the bread to mix with the meat.

The recipe’s simplicity leaves room for multitasking, so feel free to grab a Presidente, because the only thing more Dominican than drinking a beer with your chimi is turning a chimi into a casserole. To make this yourself, you will need:

1 loaf of pan de agua or any other loaf of white bread (e.g. Italian)

Consuming a chimi burger traditionally commands that the person eating is inebriated, so taking sips of Presidente, often referred to as “agua Dominicana” for both the ease and quantity in which Dominicans consume it, is an integral part of the recipe.

Season the meat with garlic, oregano, salt and pepper. Pound the meat into a large, thin patty, and place on a griddle over medium heat. The meat should cook for about seven minutes on one side and four minutes on the second, until it’s nicely seared and brown. Don’t worry about it overcooking the meat; the special sauce will be providing most of the flavour and moisture.

While the meat is cooking, slice the bread and butter it evenly. Chimis are traditionally made with pan de agua (water bread), but if you can’t get your hands on it, any loaf of white bread will do (e.g. Italian bread).

Toast the bread in an oven at 175 degrees celsius for about five minutes, until a light, golden brown. Avoid over-toasting the bread since it will be going back in the oven. If timed correctly, you should be halfway through your second beer as the bread is done toasting. Once ready, cut the bread into cubes.

Next, break up the meat into small chunks using a spatula, and pour into a bowl along with the bread. You should have a roughly one-to-one meat-to-bread ratio. Pour about one third of the special sauce into the bowl and mix everything around until the bread and meat are evenly coated.

Add the shredded cheese and mix again. Traditionally, a chimi doesn’t include cheese, but it’s also not usually a casserole, so I think we can give ourselves some leeway. Pour the bowl into a casserole dish greased with butter and place it in the oven for about five minutes or until cheese is melted and bubbly. 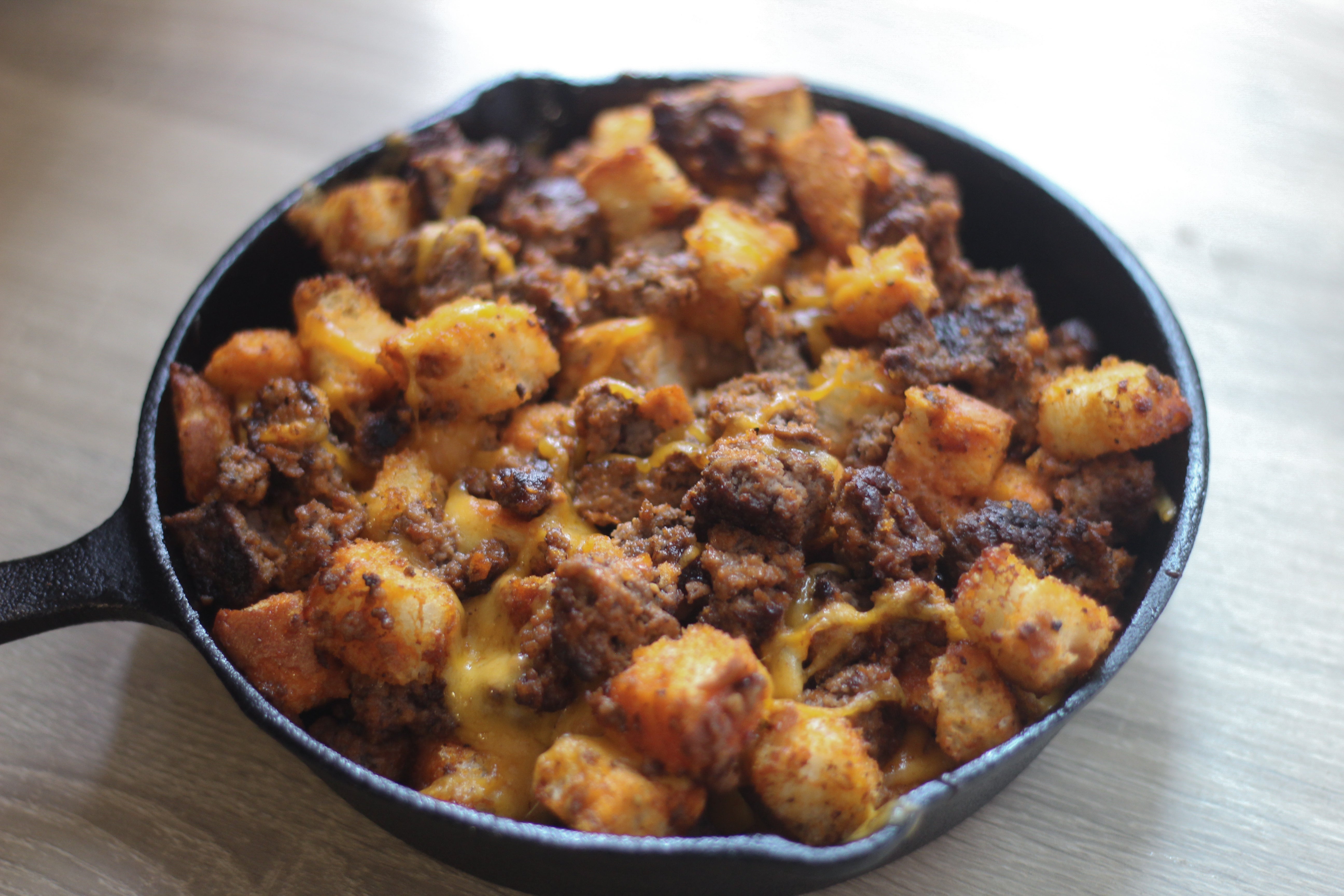 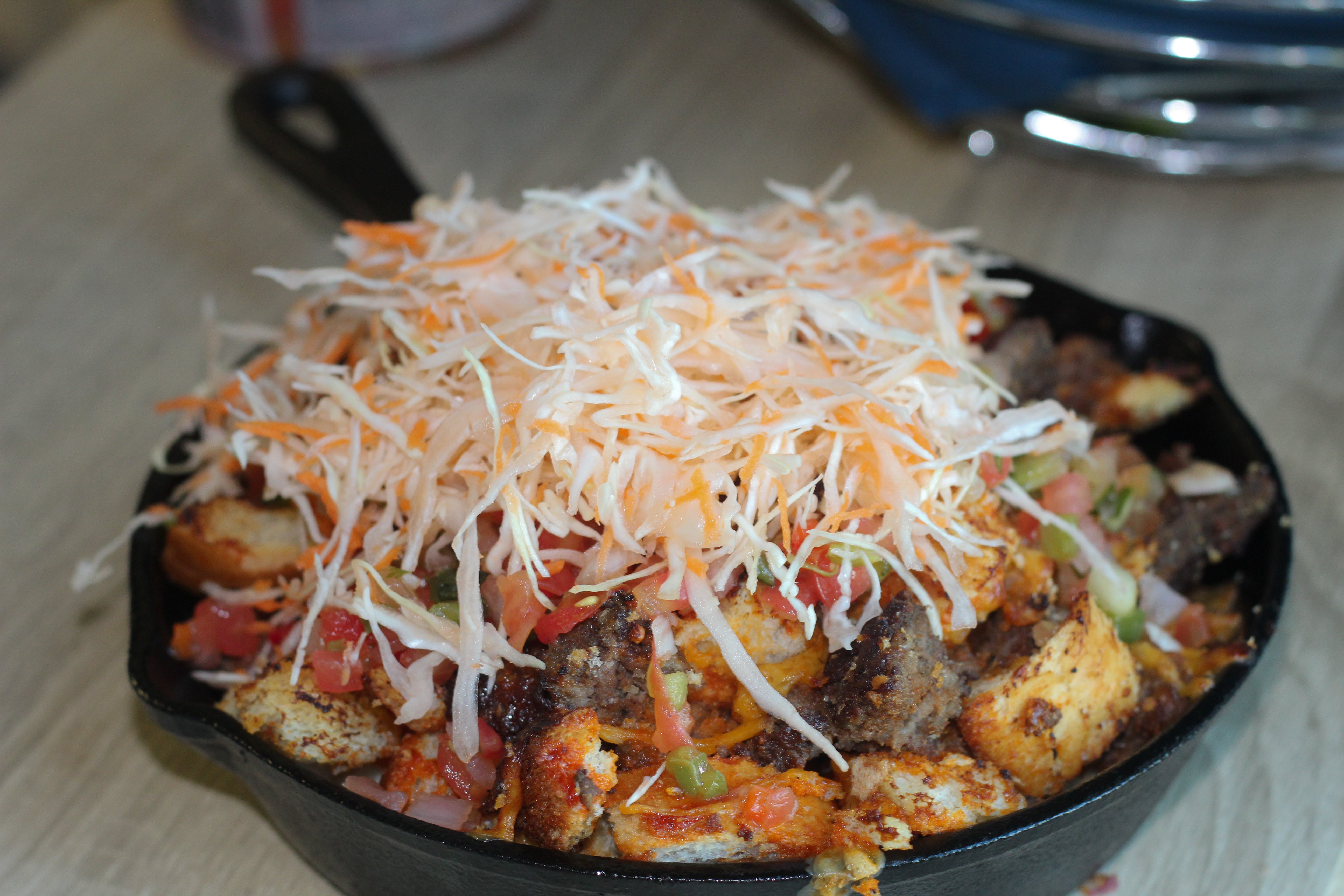 Take the dish out of the oven and layer the tomato and onion mix on top. Next, pour the shredded cabbage and carrot, and drizzle the remainder of the special sauce to your liking. Should you start feeling generous when pouring the special sauce, remember that there’s no such thing as too much. 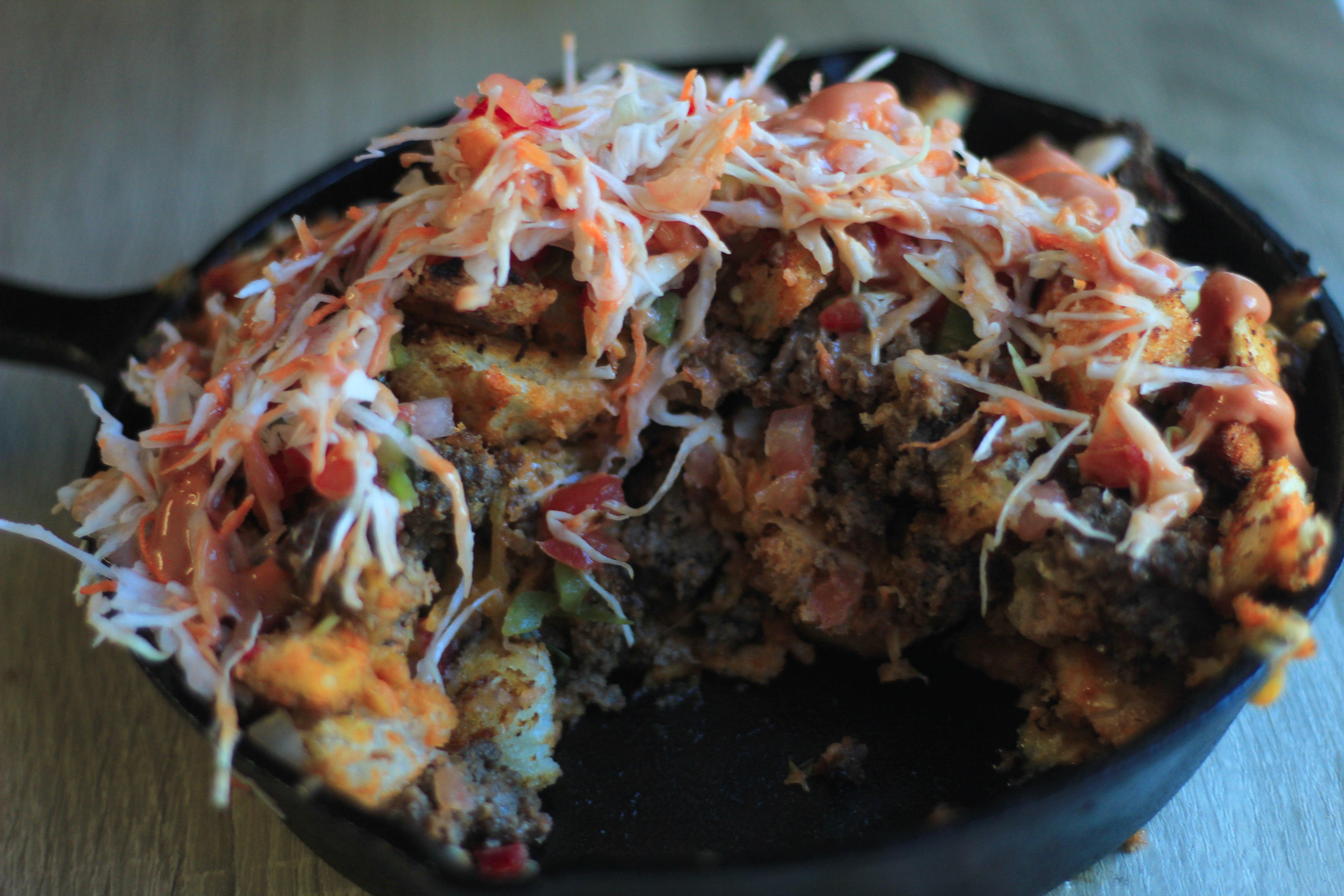