iOS 13: Every Big Feature Coming To Your iPhone

Apple is hosting its annual Worldwide Developer Conference this week and, as expected, kicked off the conference by unveiling iOS 13, the next version of its mobile operating system, during the show’s opening keynote. Apple showed off a LOT of stuff, including key improvements to overall privacy, overhauled apps, and sweeping software changes for iPads. Here’s a rundown of the changes you’ll notice, and what they mean for your iPhone.

Everything will be faster

According to Apple, iOS 13 will improve performance in a few key ways. Apps should launch twice as fast. “Smaller apps” should download in half the time, and update 60 per cent more quickly. Face ID should take 30 per cent less time to unlock. It’s hard to say whether you’ll notice the difference — especially with downloads, since their speed depends on your connection as well — but it sounds like a nice improvement.

Also, this wasn’t mentioned in the keynote, but Apple said you will now be able to download larger apps—over 150MB—using cellular data, instead of waiting for wifi. It’s a small improvement, and one that people with large or unlimited data plans will care about, but it’s always nice to have the option. 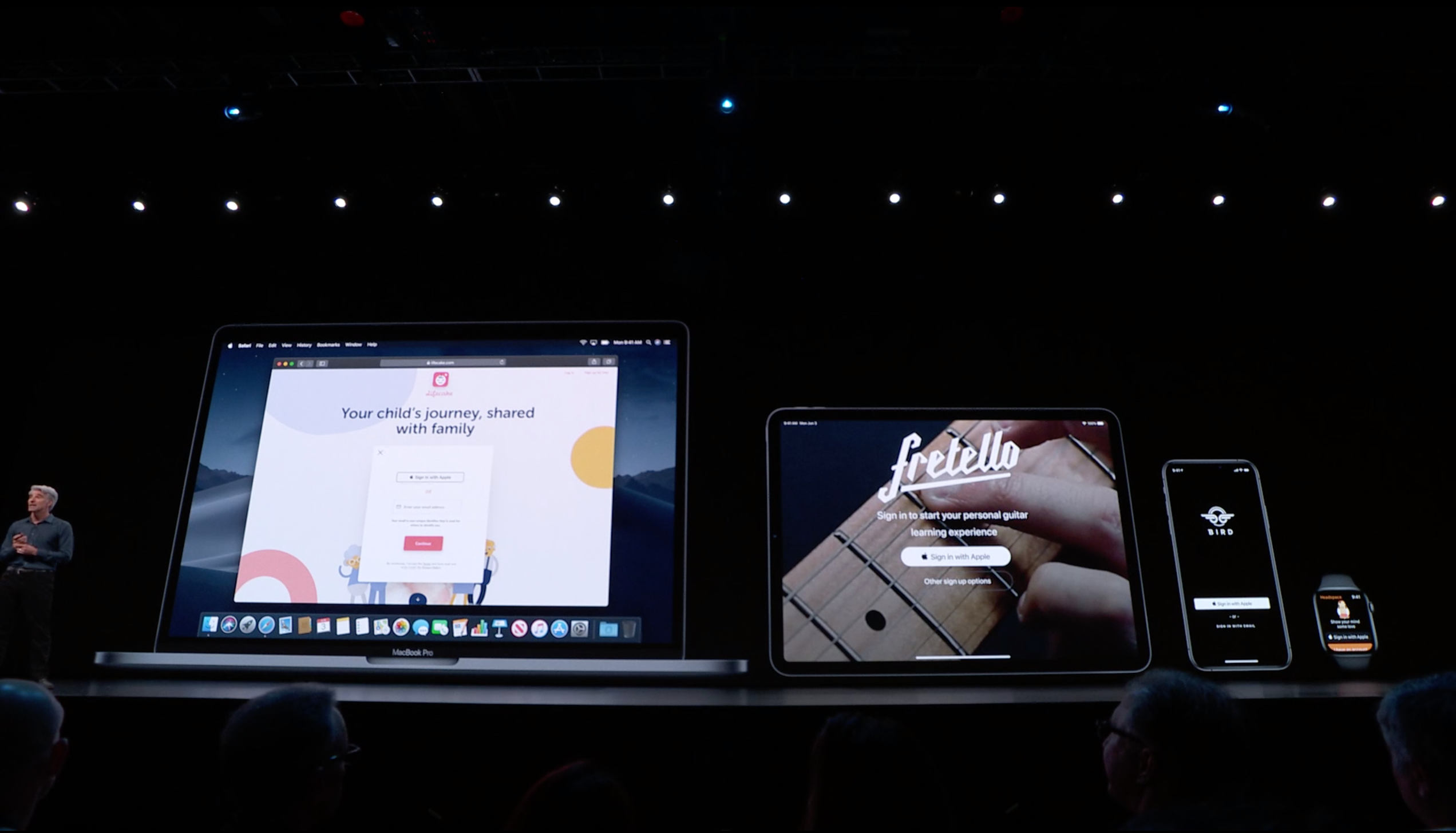 In the security department, Apple wants to give iOS users a more secure alternative to convenient social sign-in buttons, like sign in with Facebook, which links external accounts to the social network giving it more data. The Sign In with Apple button works like any other social button, but prompts you to authenticate yourself using Face ID or Touch ID instead syncing to an authenticated social media account.

Better yet, when you use the button in conjunction with a service that requires an email address, iOS 13 gives you the ability to use any of your stored email addresses, or give a randomly generated “dummy” iCloud address, which forwards messages to your account. You can then delete said account (or, presumably, stop forwarding messages to your real email) whenever you want.

Given all the concerns with mobile apps storing and using location data lately, it’s nice to see that iOS users will be getting more options to control when and how location data is used this year. Instead of simply choosing what apps can and can’t check your location, you can now choose to simply let an app read your location data one time, forcing it to re-authenticate every time it wants to track you. You can also tell iOS to send you a notification each time an app asks for your location data, so you can see if any of your apps are acting fishy. 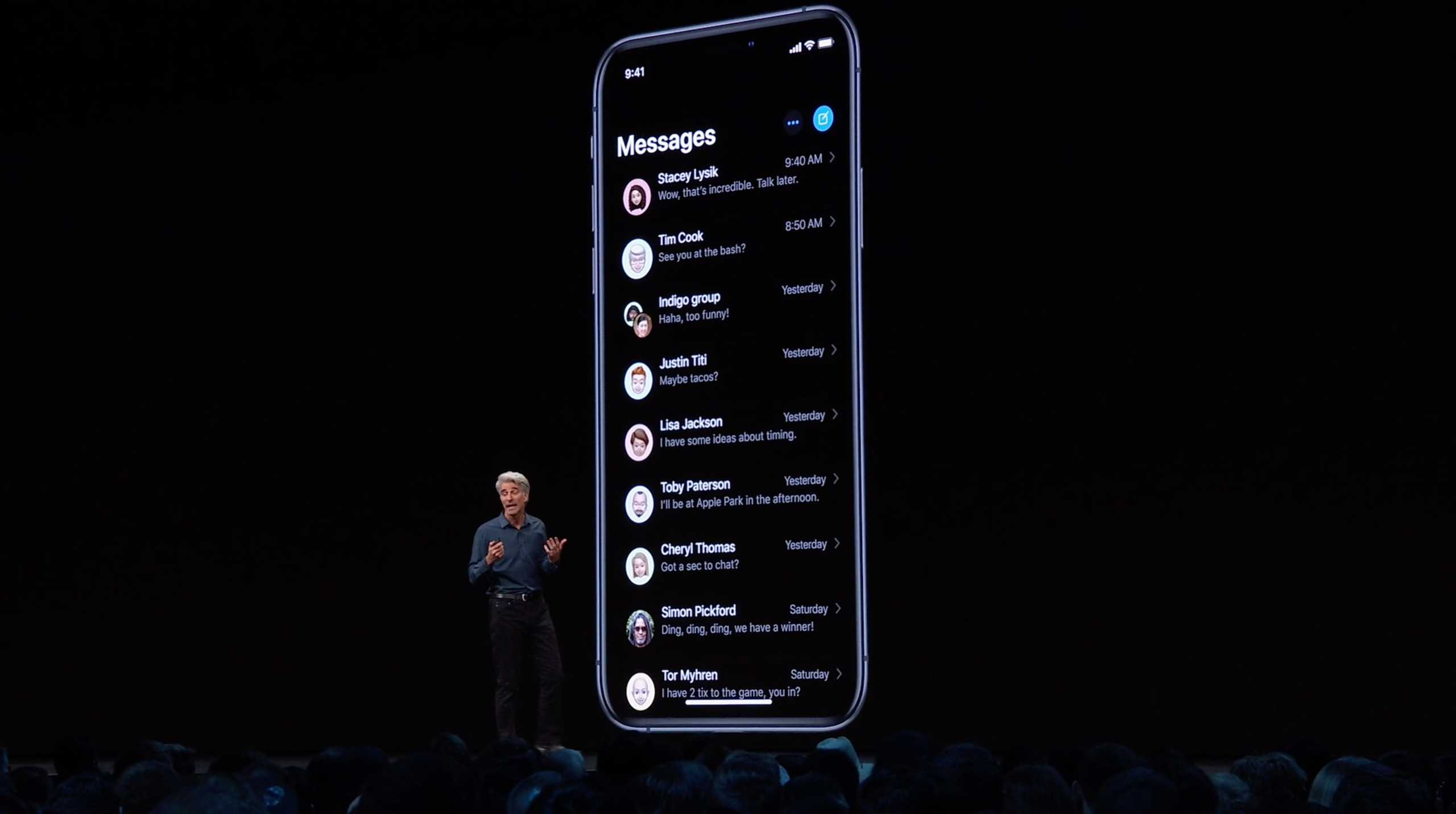 In Messages, users will now see a contact photo next to each person’s name, giving it a more social feel. When you message a person who may not have you saved in their phone, you can choose to send a custom name and image, introducing yourself and making people less likely to treat you like a bot. This seems especially helpful since iOS 13 also adds a feature that automatically sends all unrecognised calls to voicemail.

Memoji get a glow up and stickers 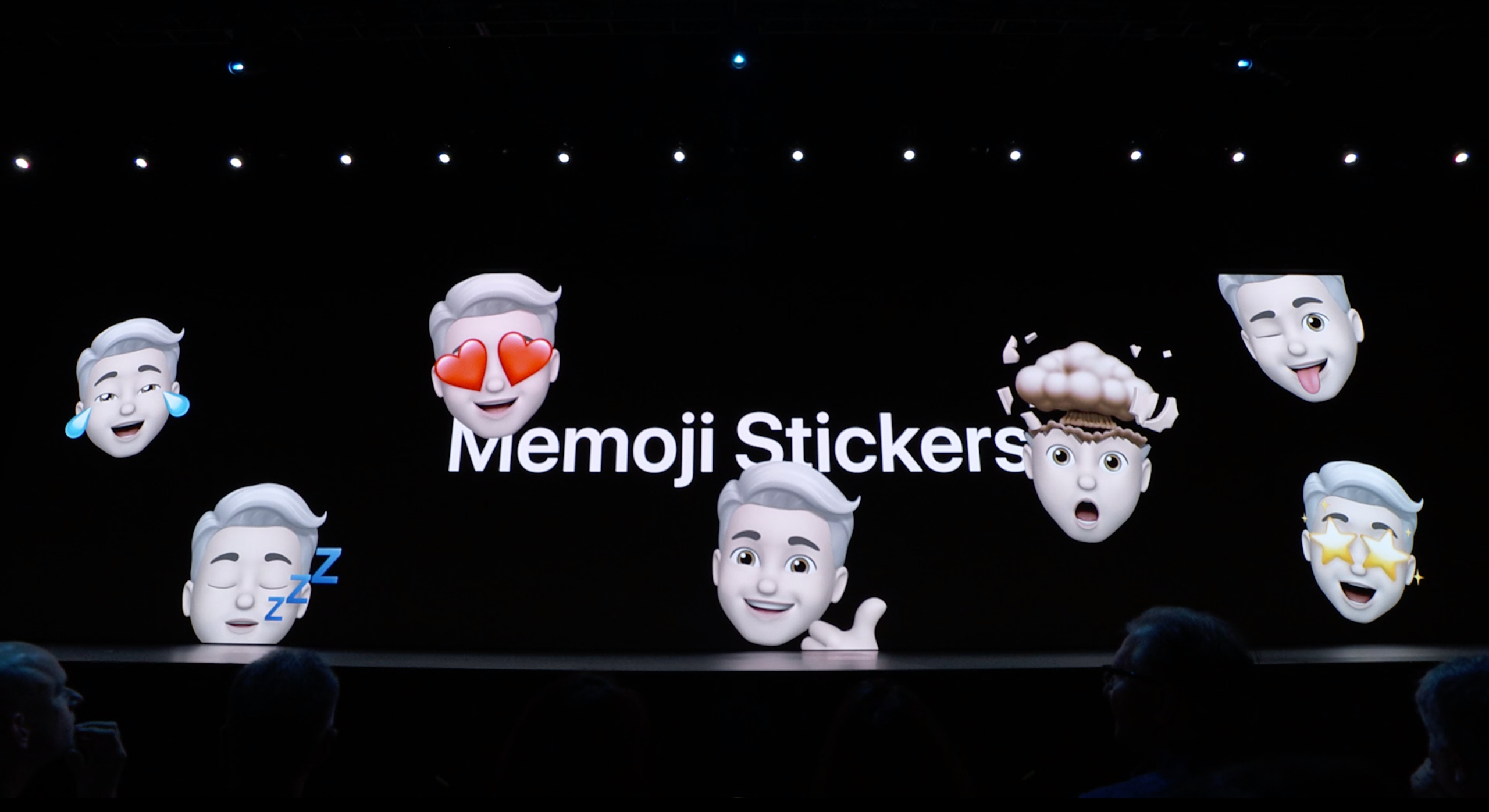 When do set that contact photo, Apple would prefer you use a picture of your Memoji. In case you forgot about them, Apple introduced Memoji, customisable emoji avatars made using the iPhone X’s front-facing camera, in iOS 12 last year. In iOS 13, they are getting a bunch of improvements, including the ability to add piercings and makeup, change bodily features like teeth, and add hats.

Once you’ve customised it, you have the option to generate a sticker pack of your Memoji (or a generic Animoji) making different expressions, which you can send using the stickers feature on the iOS keyboard. 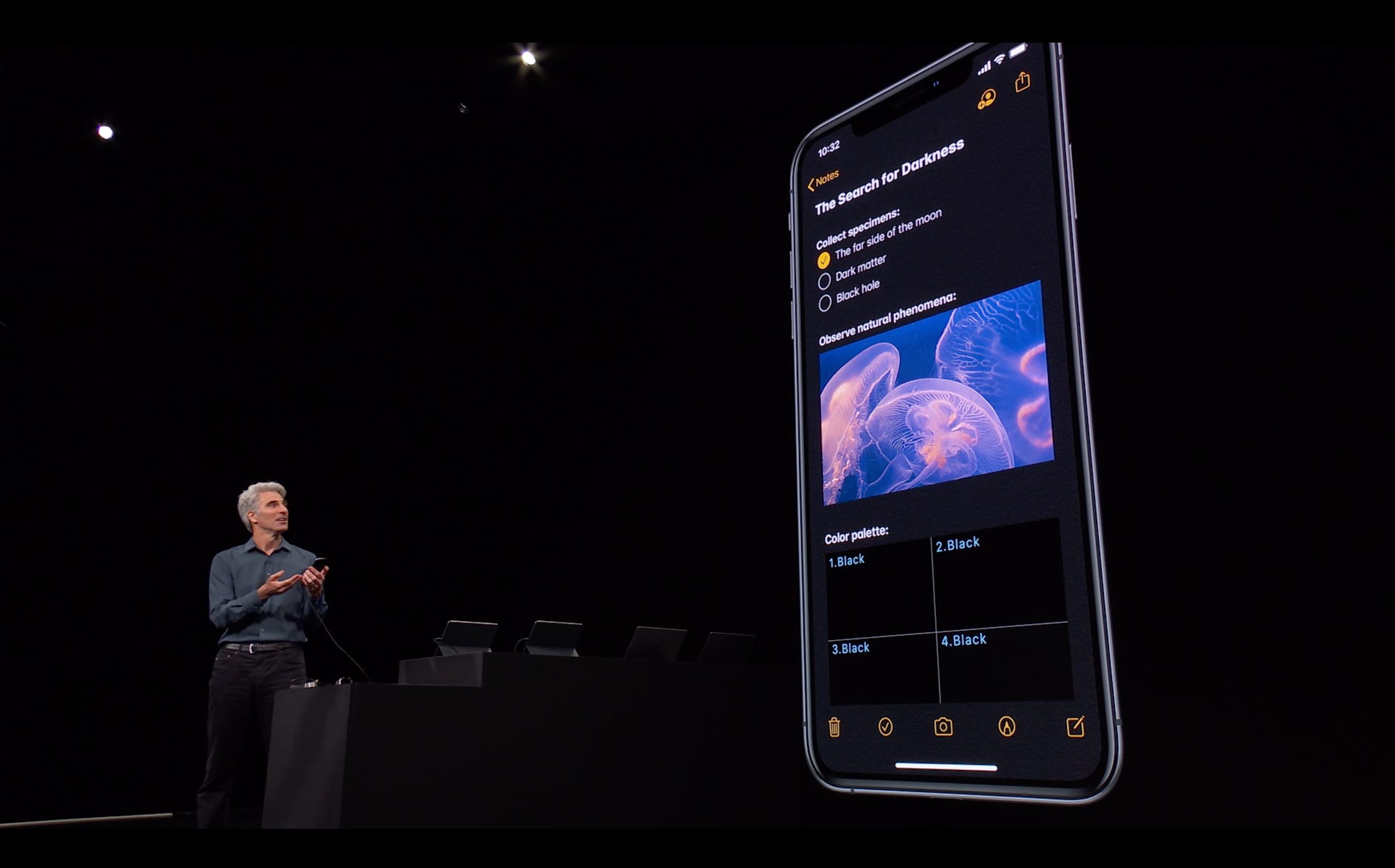 As expected, Apple announced that iOS 13 will introduce a Dark Mode for iOS and Apple’s apps. Now you can minimise the amount output by your phone in menu and apps by turning everything black or dark grey. Switching to dark mode will also switch your wallpaper, and iOS 13 will come with a set of Dark Mode-optimised ones to maximise the effect.

Dark Mode will be easy to toggle on and off at will—there will be a Control Center button—or you can set it to turn on automatically at specific times. Third-party developers will have access to Dark Mode through Apple’s API, so developers can (and hopefully will) add it to their apps, though there’s no guarantee when/if developers will do so.

Type without lifting a finger

At long last, iPhones will now have access to a swipe-style typing in all apps, where you drag your finger from key to key, rather than tapping. From the limited demo during the keynote, Apple’s QuickPath typing didn’t have any immediately obvious distinguishing features, but given that this is feature fans have been using for years on Android or using third-party keyboard software, it’s just nice to have parity.

Find My iPhone…even when it’s off

The “Find my Friends” and “Find my iPhone” apps will be combined into a single app in iOS13, simply called “Find My.” The new app will add a couple key new features to the service, both of which enhance Find My’s primary function, helping you when your phone is missing or stolen.

First, Find My can now track synced devices when they are asleep or in offline mode using an encrypted Bluetooth location signal. According to Apple, that signal piggybacks on other Bluetooth signals, making it harder to trace. Apple also said also it will not impact your devices’ battery life.

There are two major additions to Apple’s Health app. The first is the noise level feature, which can detect the decibel level in your headphones, or your immediate surroundings, and notify you that the sound you’re hearing could damage your hearing and if, so, how long it may take for that damage to occur. It sounds potentially obnoxious, but as someone who has definitely damaged his hearing over the years with loud music, I think it’ll come in handy.

The second addition to the Health app allows women is Cycle Tracking, which allows women to chart their menstrual cycles. Users who choose to give the app information about their menstrual cycle can track and visualise statistics about their cycles, allowing them to track irregularities and receive a notification predicting when their periods will start. There are also similar fertility focused features, like “fertile window projection.”

Given the sensitivity of that data, it feels important to relay that Apple said it does not and will not record or share any data in the Health app, so this information is theoretically private and secure. 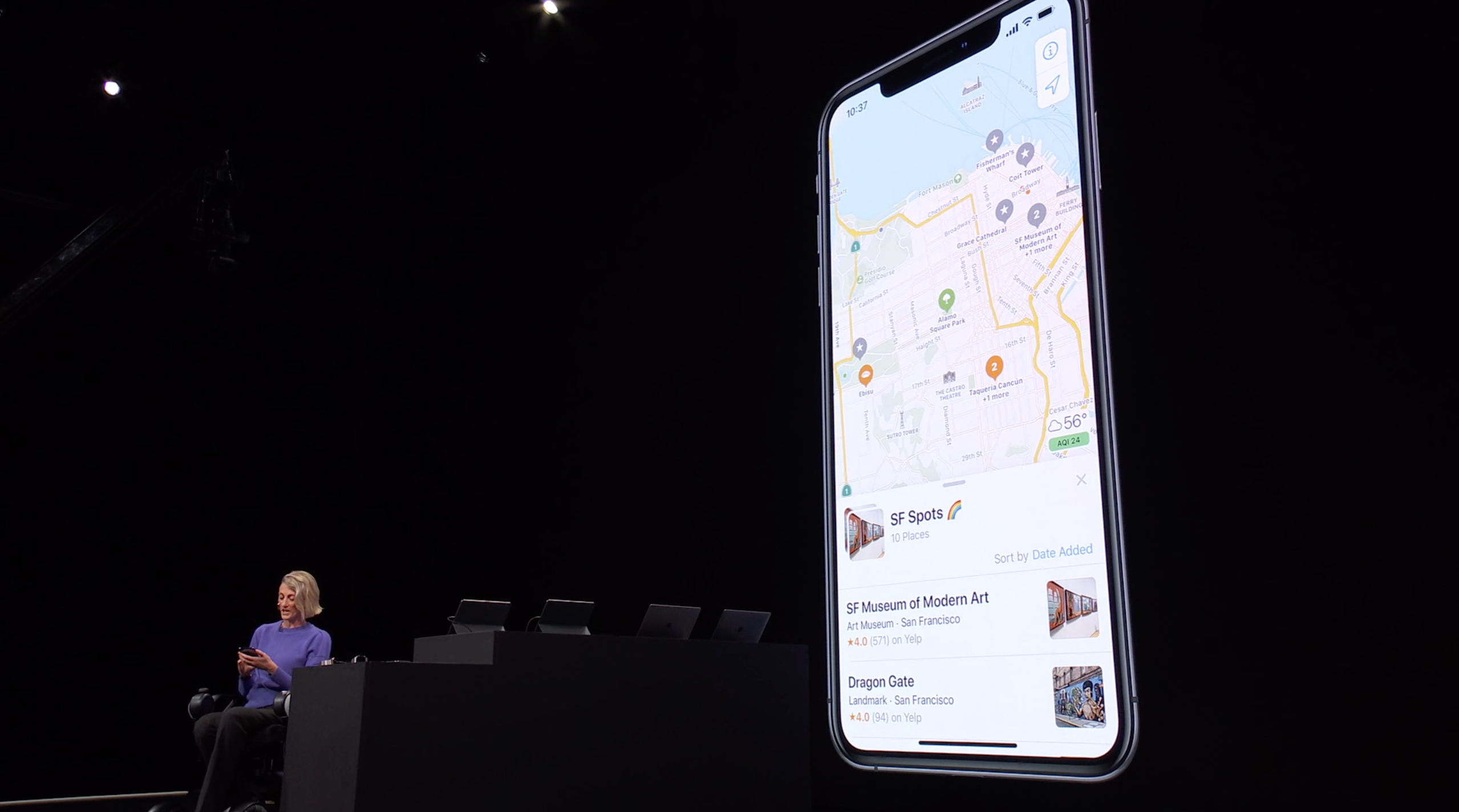 Apple said it’s overhauling the mapping data used to generate Apple Maps. The new version, the company claims, will offer much more detail than the current Maps app. In addition to more points on the map, that increased detail will include real-time mass transit and airport information.

The revamped Maps app will also have a few new features, including the ability to add locations to “collections” or a favourites list, and a Google Streetview-like feature called “Look around mode,” which allows you to see a 360-degree ground-level view of what any point on the map looks like. You’ll also be able get address information and other location data about nearby buildings and business you find nearby.

The process of adding the new data will take time, Apple said it will have the full continental U.S. updated by the end of 2019.

Making your photos more fun to look at 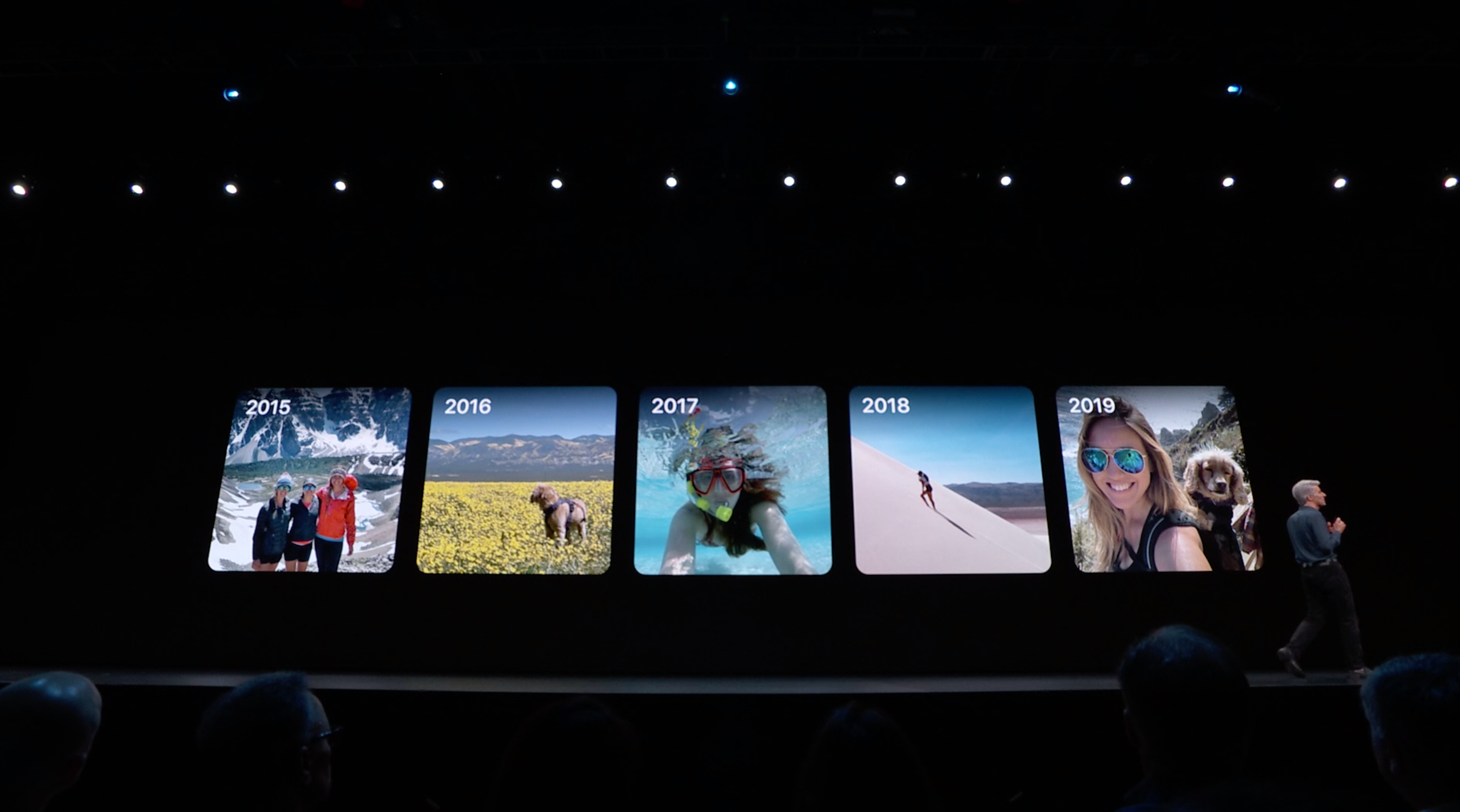 The photos app is getting a full-blown renovation. The new app will offer machine-learning augmented curation tools, which will hide busywork photos like receipts, screenshots, and duplicate photos, so if you’re looking to scroll through images of friends and family, that’s what you’ll get.

It will also revamp the “events” based organisation system, allowing you to sort photos by day, month, or year. By day, the app will curate your photos and create unique presentations of each photo set. By month or year, it will recognise repeat events and show you photos with common themes.

The most useful shift is for videos: All of the photo-editing tools in Photos — stuff like rotating photos and adding filters, and other colour balancing options — will now be available for editing videos as well. While it’s no replacement for a true video editor, the ability to make quick adjustments on the fly is a game-changer for the everyday videographer.

Mail, Notes and Reminders all get new looks too 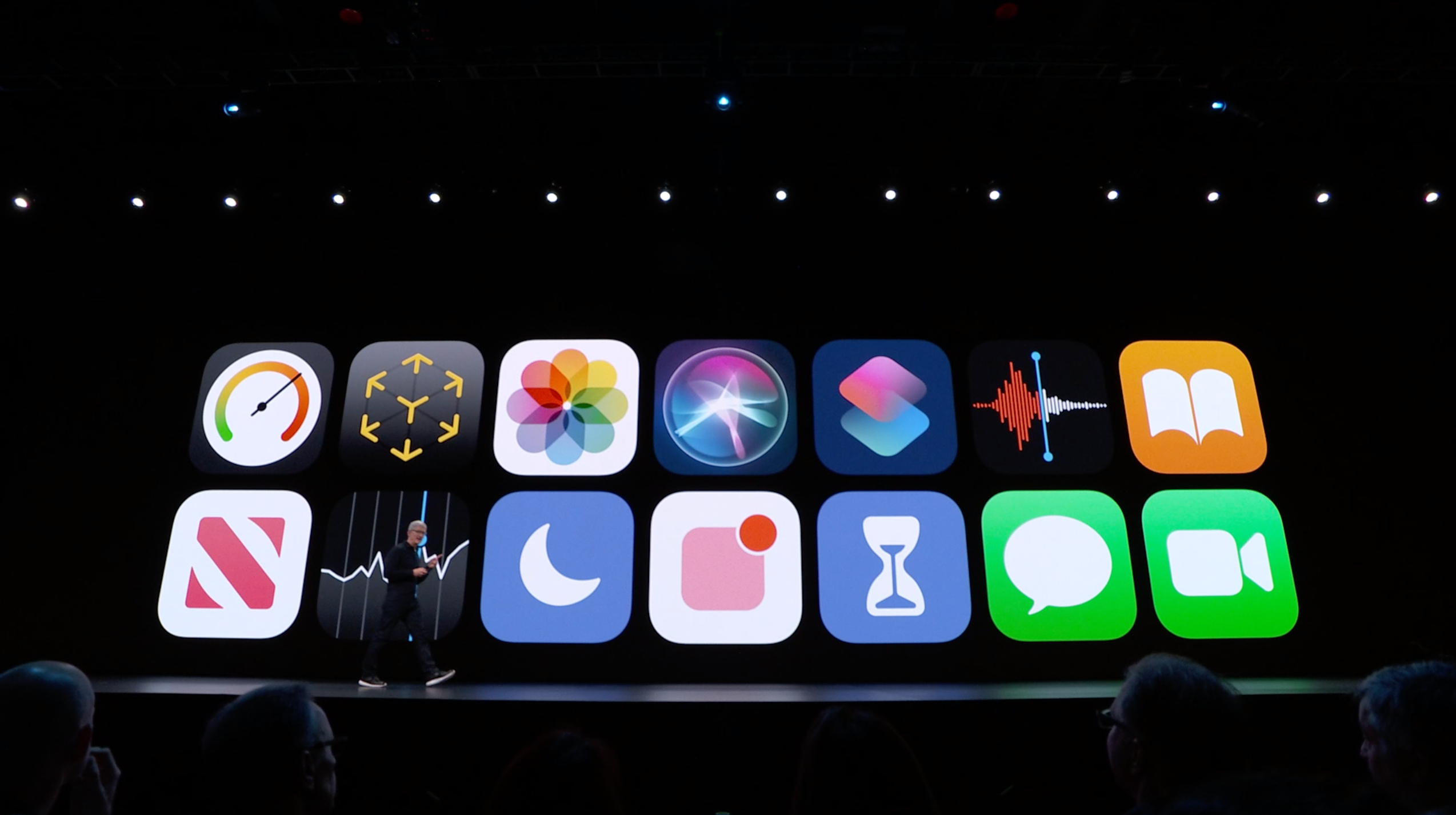 Many of Apple’s other core apps will also get major revisions this year. Mail will get updated features, including a new text formatting bar that makes it easier to change text size, embolden, italicize, and underline. The app now supports rich fonts, as well, giving you the ability to add a custom font if you choose. Notes offers a more photo-friendly gallery view. Reminders has a whole new look, focusing on the ability to add details, including dates, times, and tags to your to-dos.

iOS is just for phones now Perhaps the biggest update of the day, Apple announced that the iPad will start using its own operating system, iPadOS, when the next wave operating systems rolls out this year. The new operating system seems to split the difference between iOS and MacOS, making the tablet much more useful as a laptop alternative.

It isn’t clear how big an impact the separation will have, at least in year one. Most, if not all, of the biggest changes coming to iOS 13 will be coming to iPadOS. It also appears that some of the features Apple highlighted for the iPad during the keynote, such as an updated Files app that resembles MacOS, will be available on iOS 13. I’ll be doing a rundown of what’s coming to iPadOS, and will let you know.

So when do we get to see all this stuff?

iOS 13 entered developer beta today, which means people who pay for a developer licence can download it now. Apple said a public beta will be available in July, so keep your eyes peeled for it on Apple’s public beta site. Finally, the complete version will roll out to everyone this fall.