You Should Marinate Pork Chops In Root Beer

A juicy, perfectly cooked pork chop is not hard to achieve; a simple brine, followed by a reverse sear situation will render it juicy and flavourful every time. But if you feel like adding a little sweetness to your life — and creating a truly bomb crust — try soaking them in root beer for a couple of hours.

A juicy, perfectly cooked pork chop can rival a good steak and chops of the porcine variety are way cheaper than any cut of beef (except like, stew meat and cheap hamburger). But pork chops are easy to overcook and this can intimidate skittish home cooks, barring them from enjoying this fiscally responsible, incredibly delicious protein.

Like Coca-Cola with ham, the sugar and flavourings in root beer permeate the pork, while the acid in the soft drink helps tenderise the chop from end to end. I like to give them a good salting before they go into their soft drink bath, to intensify their meaty flavour and make sure they’re seasoned throughout.

The sugar in the soft drink promotes crazy crust formation, and the leftover marinade (which is just flat soft drink) can be boiled down to make a glaze with surprisingly prominent maple syrup vibes. To make these juicy, somewhat sassafras-y, sweet and salty chops, you will need:

Sprinkle both pork chops with a teaspoon of salt, wrap them back up in their butcher paper, and let them hang out in the fridge for at least four hours, ideally for a full 24. Remove them from the fridge, place them in a shallow dish, and pour the root beer over them.

Cover and place the dish in the fridge for two hours (I tried just one and it was not enough). Use this time to watch a movie, perhaps a good documentary. Just before the movie is done, preheat your oven to 100C.

Remove the pork chops from the root beer, pat them dry with paper towels, and place them on a wire rack that’s set inside a rimmed baking sheet. Bake until the internal temperature of the chop reaches 45C (20-30 minutes).

In the meantime, pour the leftover root beer into a sauce pan and bring it to a boil, skimming off foam and dark solids as they appear. Once the soft drink has reduced to a thin, lightly-coloured syrup, whisk in the soy sauce and a tablespoon of butter, and set aside. 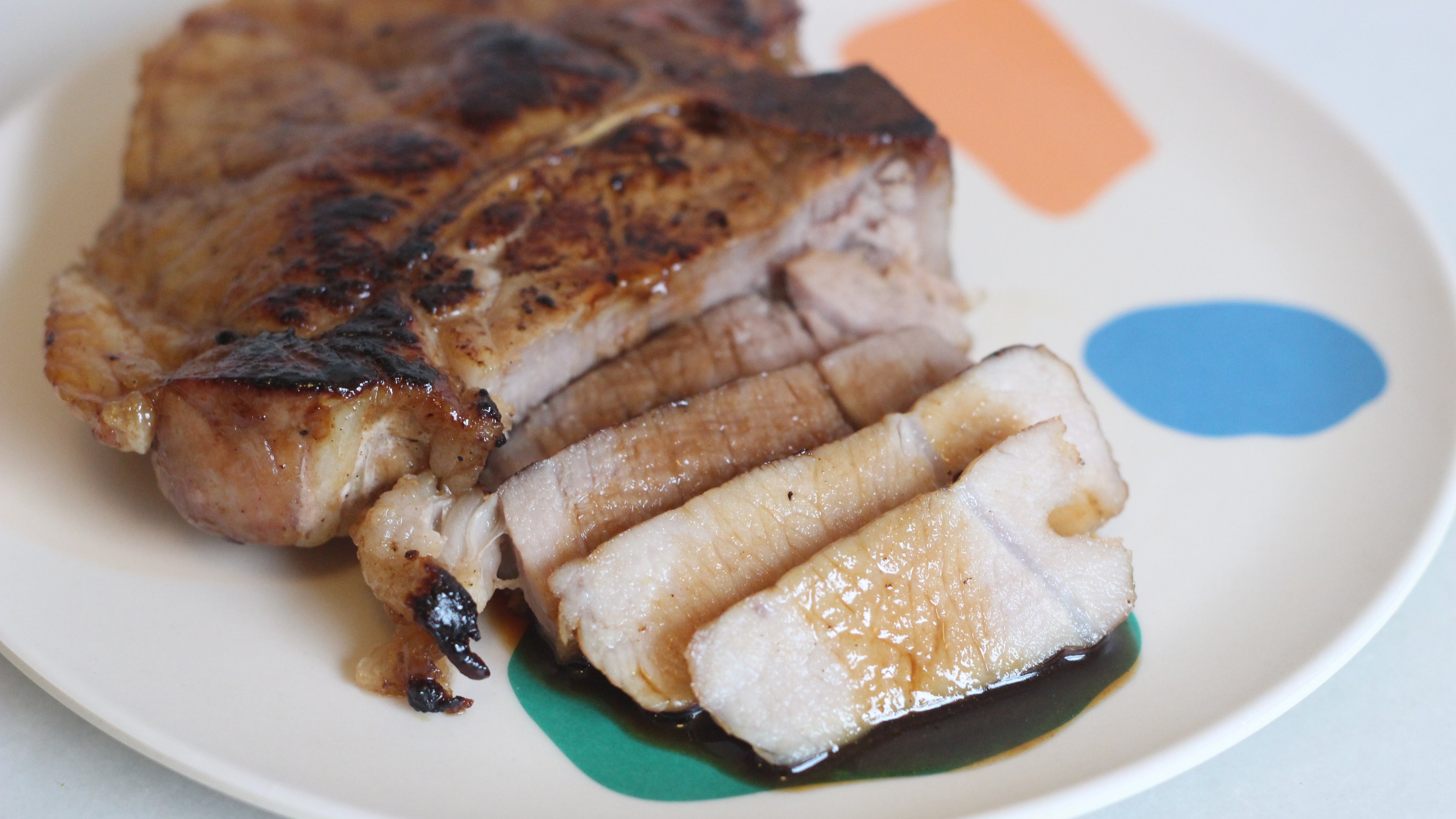 Once the pork chops reach 43C, heat a cast iron or stainless steel skillet over high-ish heat (you want it in between medium-high and medium), and drizzle in a little vegetable or grape seed oil. Wipe out the excess with a paper towel, and sear the pork chops on each side, flipping frequently to avoid too much browning in one spot.

If they start to burn all over, reduce the heat, but a little blackening is totally fine. Once they reach an internal temperature of 50C and have formed a fairly impressive crust, add a tablespoon of butter to the pan and baste the chops until they reach a temperature of 60C.

Remove them from the pan to rest, and pour the root beer glaze into the hot pan, stirring constantly to combine with the pan drippings and form a thick glaze. Pour over chops or serve on the side for dipping.