You Can Now Tell Alexa To Delete Your Conversations

If you don’t like the idea that your Echo device is recording every question you ask it — all in the interest of, well, whatever Amazon’s reasoning is — you can now wipe its memory each day with a handy voice command. Say this to your device, “Alexa, delete everything I said today,” and your Echo speaker or other Alexa device will do just that: delete all voice data and stored commands on your account that have accrued that day.

You will, of course, have to first set this feature up in your Alexa app’s settings, and the setting is pretty buried. Open up the app, open up the Settings section, and then tap on Alexa Account > Alexa Privacy > Review Voice History. There, Toggle on the ability to “Enable deletion by voice,” and train your roommates to be as diligent about saying “the phrase” as you are each day, just in case you forget. 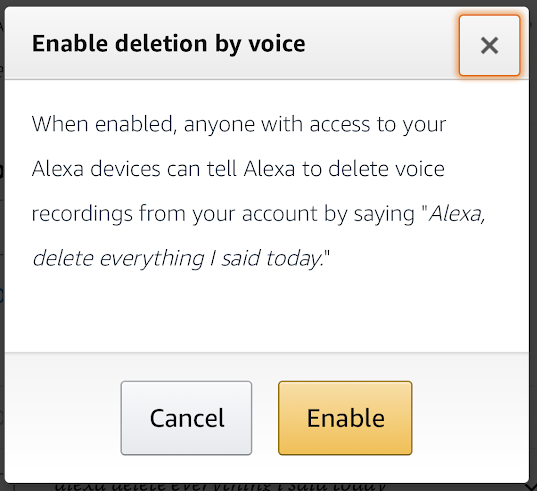 You’ll also soon be able to tell Alexa to “delete what I just said,” a feature that should go live at some point over the next few weeks in the U.S.

For those who want as little Alexa data being stored as possible, we recommend using these voice commands often, especially after periods of heavy use. If you happen to forget, or the time between deletions feels too long, you can also manually delete data from the Alexa app settings, which we have a guide for as well.

For those on iOS, we also recommend using Jumbo, a privacy app that lets you delete all the data associated with whatever accounts you’ve synced with the service. The app currently works with Amazon Alexa, Google, and Facebook, with support for other platforms like Instagram and Tinder also planned.

While we’re happy this functionality now exists, we can’t help but assume it’s Amazon’s response to the bad press the company has recently received. There have been numerous reports on how Alexa tracks and shares voice data, as well as other privacy concerns around Amazon’s smart home devices—such as the revelation that certain Alexa settings meant Amazon workers could be listening in on your Echo conversations at any time, and that Amazon’s Ring security camera footage was being stored, watched, and categorized by Ring employees. Luckily, you can turn off many of these features, or at the very least take action to reduce the possibility that outsiders may have access to your devices or data.