Graham cracker crusts fill a very important dessert niche: a quick, simple crust for when you want pie, but can’t be moved to turn on your oven. As someone who hates sweating and literally always wants pie, I wish I could get more excited about them.

I’ll never turn down a slice, but my least favourite places to find a graham cracker crust are my all-time favourite pies: key lime and lemon meringue. Graham crackers just don’t go with citrus, and you can’t convince me otherwise. I think they’re delicious with melted chocolate and gooey marshmallows, where their nutty, whole-wheat flavour and dry texture actually make sense. Citrus pies need something buttery to set off the filling, which is why I’ll always prefer them with a traditional pastry crust.

But, as we covered above, there are times I just don’t want to make pastry—and I also don’t want graham crackers. To my mind, the perfect solution comes in the form of Atlantic Beach Pie, a dead-simple recipe I saw on Food52 and in the New York Times Cooking section last summer.

The crust is just butter, sugar, and pulverised saltine crackers; the filling is a super simple condensed milk-and-lemon juice situation. Once it’s chilled and set, the whole thing gets topped with whipped cream and flaky salt. I’ve thought about this salty-sweet, key lime-lemon meringue mashup literally every day for about a year, but because I’m an idiot, I still haven’t made it. So now I’m making up for lost time—with one more substitution.

Saltines are great, but Ritz crackers are scientifically perfect. They’re buttery and delicately flaky and just sweet enough, which is everything I want in a pie crust.

Instead of saltines, I decided that I wanted a Ritz cracker crust. Here’s how to do it. 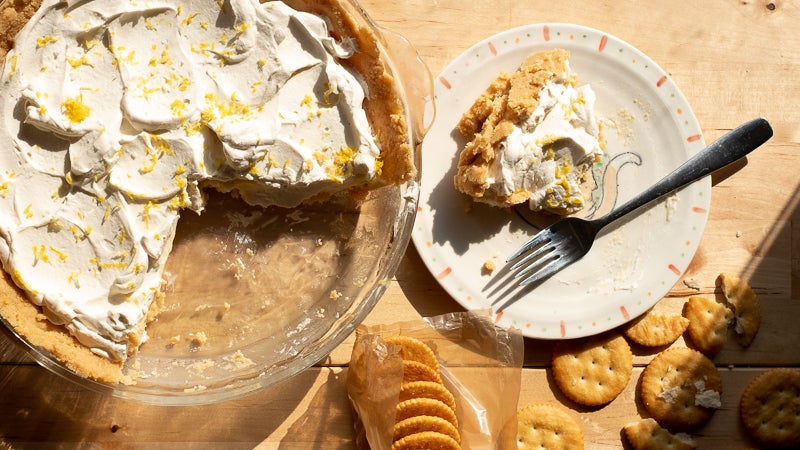 Blitz half a stick of butter and 2 tablespoons of sugar together in a food processor until smooth and creamy, then add about a sleeve and a half of Ritz crackers. Pulse until the crackers are finely ground and the mixture holds together, scraping down the bowl as needed.

Press into an eight-inch pie tin and freeze while you make the filling, which is somewhere between lemon curd and condensed milk crème pâtissière. Naturally, I make it in the microwave.

How To Make Perfect Lemon Curd In The Microwave

No matter how many flawless custards or mirror glazes you've made in your life, some culinary techniques just seem to invite disaster, especially those that hinge on precise temperature control. If you need to evenly heat a delicate substance to a precise temperature, the microwave might seem like a horrible choice — but it's often the best tool for the job.

Whisk a whole can of condensed milk with a generous half cup of lemon juice and microwave the mixture until steaming hot, a minute or two. In a separate bowl, whisk together one whole egg, three yolks, and a quarter cup of cornstarch.

Temper the eggs and starch with a cup of the hot condensed milk mixture, stir the tempered eggs back into the remaining condensed milk, and microwave in 30-second bursts until it thickens to a pudding consistency. Smooth out any lumps with an aggressive whisking (or a stick blender), cool slightly, and pour into your prepared crust.

Press a piece of plastic wrap directly on the surface of the filling and refrigerate until firm, about 6 hours. If you like, freeze the pie for about an hour before serving; it’ll help the slices hold their shape. Top with whipped cream, lemon or lime zest, and flaky salt.

Honestly, this might be my new favourite pie. I won’t lie and say that a different cracker variety totally solves the structural integrity problem of a no-bake crumb crust, but it significantly improves both the flavour and texture. Instead of dusty graham cracker crumbs, you get crispy little nuggets of extra-buttery Ritz in every bite—and between the added butter and the flavour of the crackers themselves, the overall flavour is a lot closer to a pastry crust than you’d think. It’s a genius swap that’ll work with any buttery, salty cracker you have on hand. I have a feeling I’ll be making a lot more pie this year.