The laptop business has been pretty stagnant over the last few years. The core market has settled on screens sized between 13 and 15 inches as the sweet spot with tablets and convertibles fulfilling the need for smaller displays and niche players delivering 17-inch or larger drives.

But HP’s new dual-screen Omen X offers something different; the ability to use two apps at the same time on their own displays. While chiefly aimed at gamers, I reckon it’ll make a fantastic productivity workhouse too.

HP’s take on this is different from Asus. The Zenbook Pro 15 (UX580) integrated a second display into the touchpad. But that display is only invoked when you hit the F6 key and is of limited use given your fingers are all over it a lot of the time.

Pretty much every notebook computer on the market today ships with a touchpad to move the mouse pointer around the screen. And we've seen those pads become larger with new materials used to make them smoother and more comfortable to use. But Asus has gone one step further with their new ASUS Zenbook Pro 15 (UX580), announced at Computex yesterday. They've made the touchpad into a second touchscreen display.

The HP Omen X 2S has a completely independent 6-inch secondary screen that runs at 1080p that sits above the keyboard. A screen mirroring feature lets you cut and magnifying parts of the main screen like the map portion of a racing game to the second screen. Or, if you’re working, you can have your messaging app or Spotify on the second screen, allowing the main display to stay focussed on your primary task.

Specs include Intel Core i9 processors (if you have the budget) as well as fast SSD storage, up to 32GB of DDR4 memory, Wi-Fi 6, the choice of 1080p or 4K displays, NVIDIA GeForce RTX 2080 graphics and a liquid metal compound for better heat dissipation from the 20mm thick, all metal chassis. 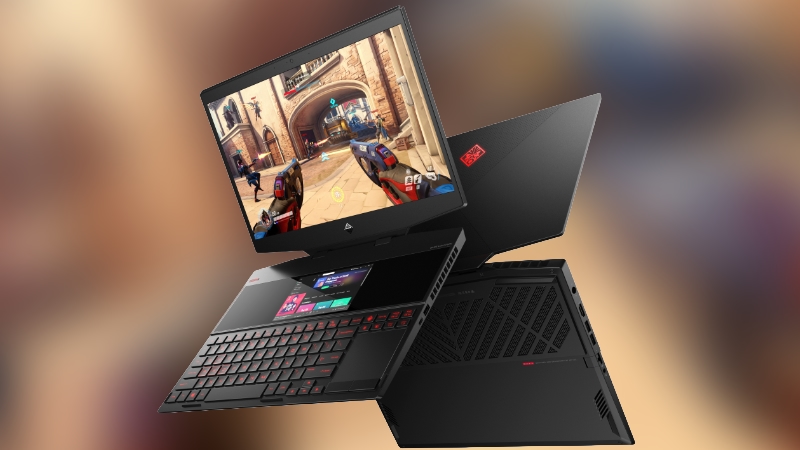 HP unveiled the Omen X 2S at its Gaming Festival in Beijing this week along with a bunch of other gaming-focussed laptops.

The benefits of dual-screen systems are well known. There’s plenty of research that shows a second display can offer substantial productivity benefits.

Such a small display won’t let you run a substantial program, but being able to keep your preferred messaging app there while you’re working would be handy. Or, having secondary information during a game so that the main display keeps focussed on the main task while other info is on the smaller screen.

The OMEN X 2S Laptop is expected to be available by June via HP.com and other retailers for a starting price of US$2099.99. I wouldn’t expect any change out of $3000 locally once you factor in GST and some room in the exchange rate.