I have eaten a lot of veggie burgers in my day.

I was a vegetarian for five years before I decided that it would be a lot easier to be the kind of person who eats meat “occasionally”—which, these days, tends to include meat served in someone else’s home or meat ordered at a restaurant when the only vegetarian option is either a pile of carbs or a slice of mushroom. (I also make exceptions for hand-dipped corn dogs, because I grew up in the Midwest, although last year I had a hand-dipped, cornmeal-covered cheese stick that was a highly preferable option.)

The last time I ate a for-real hamburger, just because I wanted to remember what they tasted like, I spent all night stomach-cramping my way to the toilet and back.

So I get why products like the Impossible Burger and the Beyond Burger need to exist. We’re living in a world where we’re eating more meat than can be sustainably produced. A good meat substitute might help us cut back on our animal meat consumption and, by doing so, mitigate some of the damage the meat industry is currently doing to our planet.

We’re also living in a world where many people are vegetarian for ethical or cultural reasons, or—in my case—because they read Michael Pollan’s The Omnivore’s Dilemma and Jonathan Safran Foer’s Eating Animals and stopped eating meat for five years. (I am deliberately avoiding Pollan’s new stuff because I don’t want to be tempted to microdose.)

But, and most importantly, we’re living in a world where hamburgers are delicious. This is why I tried that real burger last year instead of settling for another dry beige patty where you can see, like, a carrot strip clinging to a chunk of pinto bean.

It’s also why I tried both the Impossible Burger and the Beyond Burger. If I could enjoy a non-meat product that tasted as good as meat, I’d never eat another hamburger again.

In order to keep the experiment as standardised as possible, I ordered both my Impossible and Beyond Burgers from local (non-chain) restaurants, photographed them side-by-side, and ate half of each burger at the same meal. (I also got a side of hand-dipped mozzarella sticks, but I don’t think they had any affect on the experiment.)

Here’s how they compared.

I ordered my Impossible Burger with no onions, because I’m one of those people for whom the crunch of a raw onion is the oral equivalent of nails on a chalkboard, but I think the person taking my order misunderstood because my burger came with no anything—no lettuce, no tomatoes, no pickle, no mayo/mustard/ketchup. I did get a slice of cheese.

The patty itself was thin and grey and gave off the impression of having been recently dislodged from a plastic wrapper; you weren’t going to mistake this for anything shaped by human hands.

(The bun had also clearly been shaken from a plastic sack, although that wasn’t the burger’s fault.) 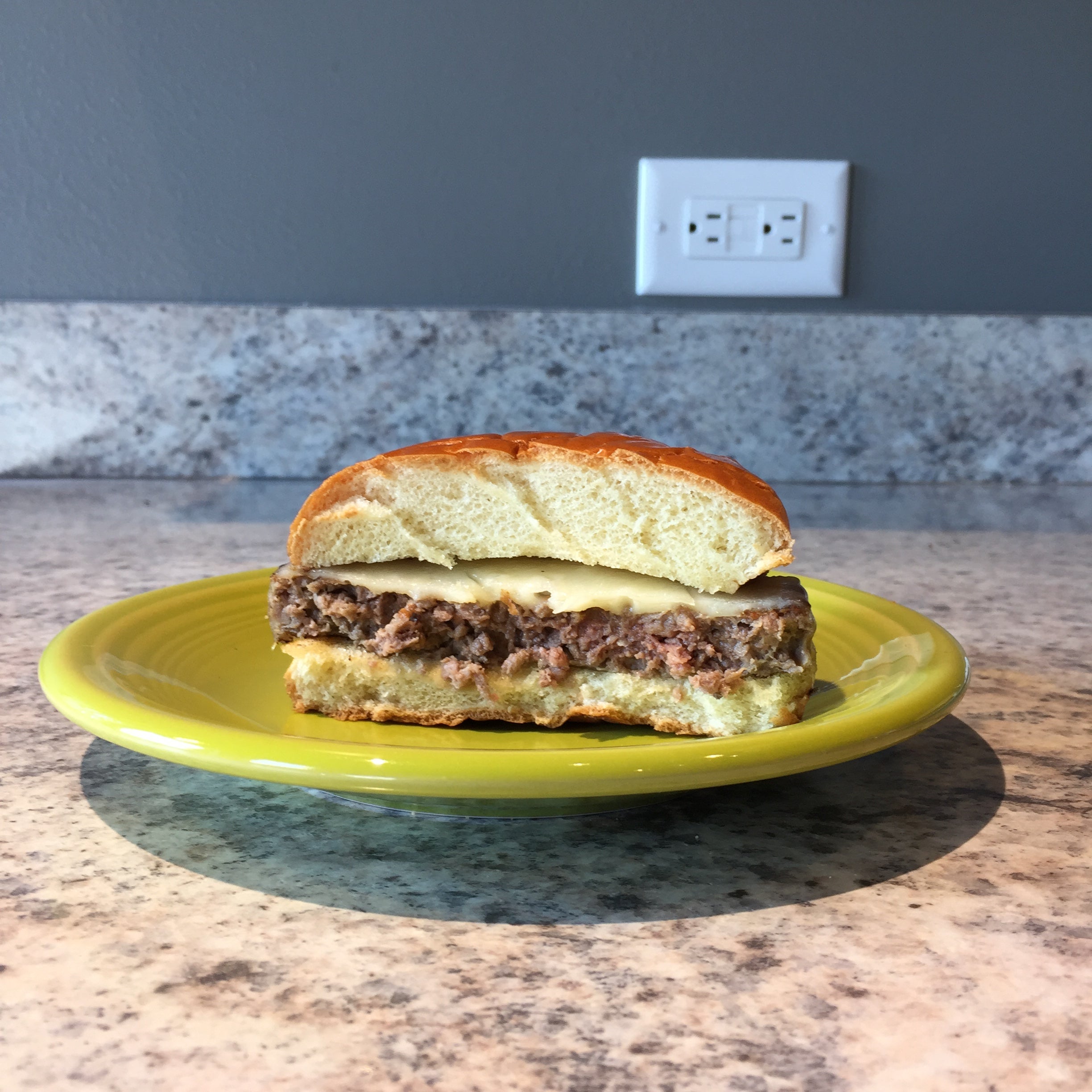 Sliced in half, the Impossible Burger interior looked a lot more like a hamburger than I was expecting—a mass-produced burger, to be sure, but you wouldn’t be able to identify this as a non-meat product by its appearance.

Nor by its taste.

Or, as Impossible Burger puts it: “meat from cows.”

It didn’t just taste like meat (from cows). It felt like meat in my mouth. Not the kind of hand-pounded hamburger with the grill-blackened exterior and enough heft to leave a lump in your stomach, but the kind of fast-food hamburger that disappears as you chew it, leaving nothing but the satisfaction of having eaten a burger behind.

I would absolutely eat this again. In fact, I already want another one.

My Beyond Burger looked like a veggie burger. It was clearly a veggie burger that was trying very hard, plated and served by a restaurant that cared very much about #aesthetics (the oats dotting the bun, the teeny-weeny arugula leaves instead of the slab of iceberg), but… well, this burger was red. Like the Impossible Burger, this puck-shaped patty had been pushed out of a plastic compartment; unlike the Impossible Burger, you could tell at a glance that no cows had been involved. 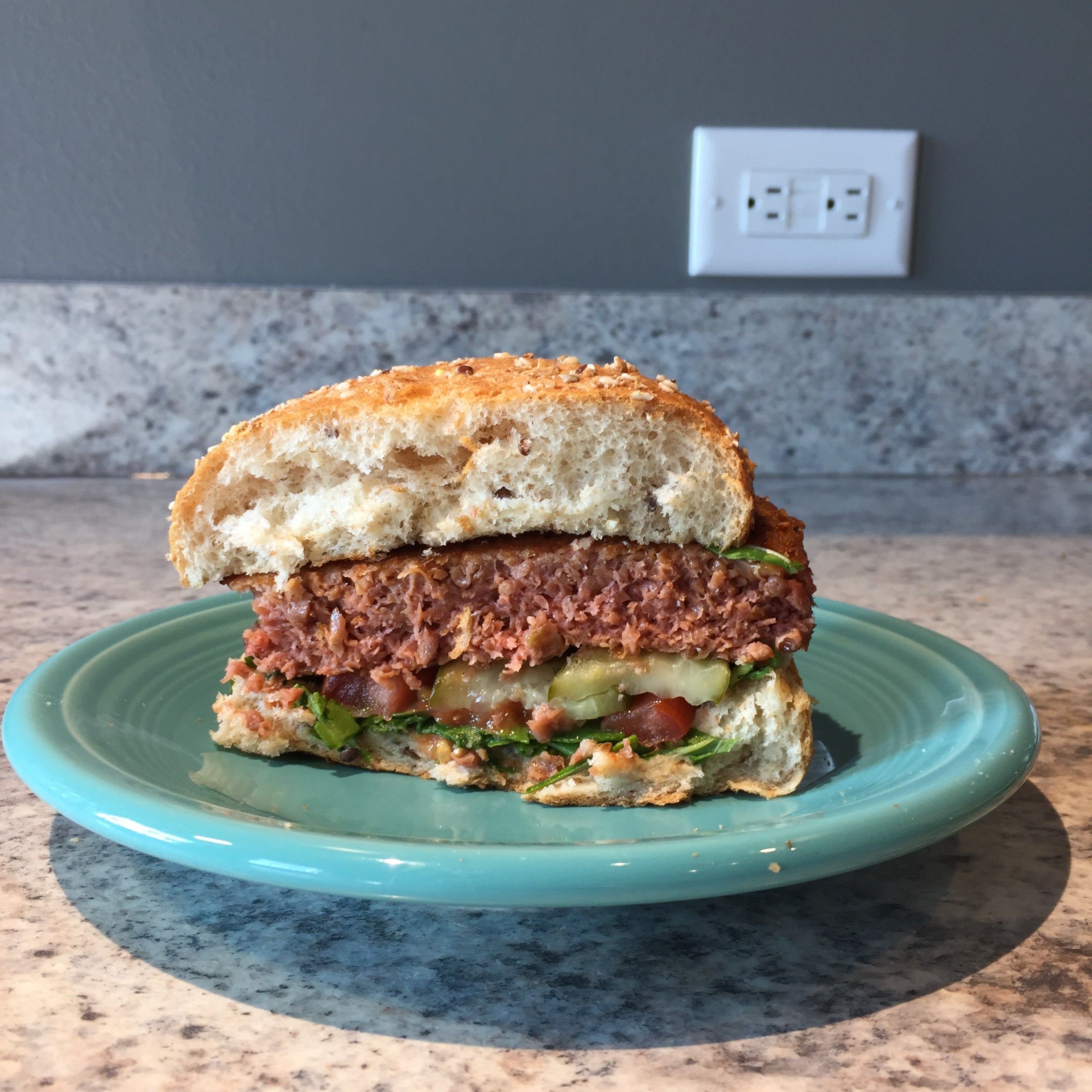 Sliced in half, the Beyond Burger looked even more unnerving; the inner granules could imply meat, if you were willing to squint, but the colour suggested the meat was still raw. According to Beyond Burger, this “red-meat appearance” comes from beets; according to other reviewers, some patties literally bleed. (Mine did not.)

Still, I was expecting to enjoy the Beyond Burger more than I enjoyed the Impossible Burger simply because the overall presentation made it look like the superior product. The patty was thicker. The bun included multiple grains. They left off the onions but didn’t forget to include the other vegetables.

I did enjoy my Beyond Burger.

At best, the Beyond Burger tastes like a veggie burger wearing a meat costume. This isn’t one of those veggie burgers where you can identify bean halves or mushroom fragments; its texture and mouthfeel are comparable to the kind of real-meat hamburger you might get at the kind of brewpub that cares about using arugula instead of iceberg.

On the plus side, the Beyond Burger provided a more complex eating experience than the Impossible Burger did. This isn’t the type of burger that melts in your mouth, giving you enough room to cram in the handful of fries that you’ve just dipped in your milkshake. The Beyond Burger is the kind of burger that demands to be chewed. Savoured. Lingered over, maybe, as you and your friends enjoy a beer or three on the patio.

I’m not the only person to note that, of the two leading players in the fake meat market, Impossible has created the slightly better substitute. As Chris Ip reports, in Engadget:

Beyond was first to the grocery stores, first to sell multiple meat products and first to the Nasdaq. But Impossible has arguably the greater soft power based on something simpler: It tastes more like animal meat.

However, I’d recommend you try them both and decide for yourself which one you prefer. After all, Beyond and Impossible share the same goal: to convince consumers to eat less meat overall.

So go ahead and order that fake-meat burger. I bet you’ll like it enough to want to eat another one.

Beyond vs. Impossible: Stats Breakdown

Other ingredients of note:

Impossible: Heme, which Impossible describes as “an iron-containing molecule that is essential for life.” It’s this soy-derived heme, “identical to the heme from animals,” that gives the burger its real-meat flavour.

Beyond: major grocery chains, major restaurant and supermarket chains including Grill’d, Lord Of The Fries, Ribs And Burgers and Coles (full list here).

Impossible: over 5000 restaurants worldwide (here’s how to find one near you), is scheduled to hit more grocery stores later this year.