Everything Google Announced At I/O 2019 That Matters

It’s Google I/O time, the annual smorgasboard of all things Android. This includes updates to the mobile operating system, newer (and cheaper) smartphones, various smarthome gadgets that are helpful (with a few caveats), and news about the latest additions to Google’s plate—including its much-anticipated Stadia game-streaming platform and the debut of Android Auto that’s finally front-and-center in a real, you-can-buy-it vehicle!

I swung up to Google’s developer conference today to hear about all the fun new announcements in-person, and here’s what excited me most from Google’s big keynote:

I’ve never been to Google I/O, so I’m intrigued by the first big “announcement” Google had—completely I/O specific, of course. Now, the special app Google has created for the event (for both iOS and Android) features augmented reality. Since I have no idea where anything is at this event, being able to point at buildings and discern whether they’re speaking areas, food stations, or the bathroom… is critical. Would that this were only available for every geek convention ever.

The announced feature that got one of the biggest cheers at the big Google I/O keynote was a simple one. Now, when your alarm goes off on your “Google Home” device (more on that name in a bit), you can just say “stop,” and it will do just that. No more “Hey Google, stop alarm,” or “Hey Google, it’s too goddamn early,” or “Hey Google, go DIAF.” Easy. 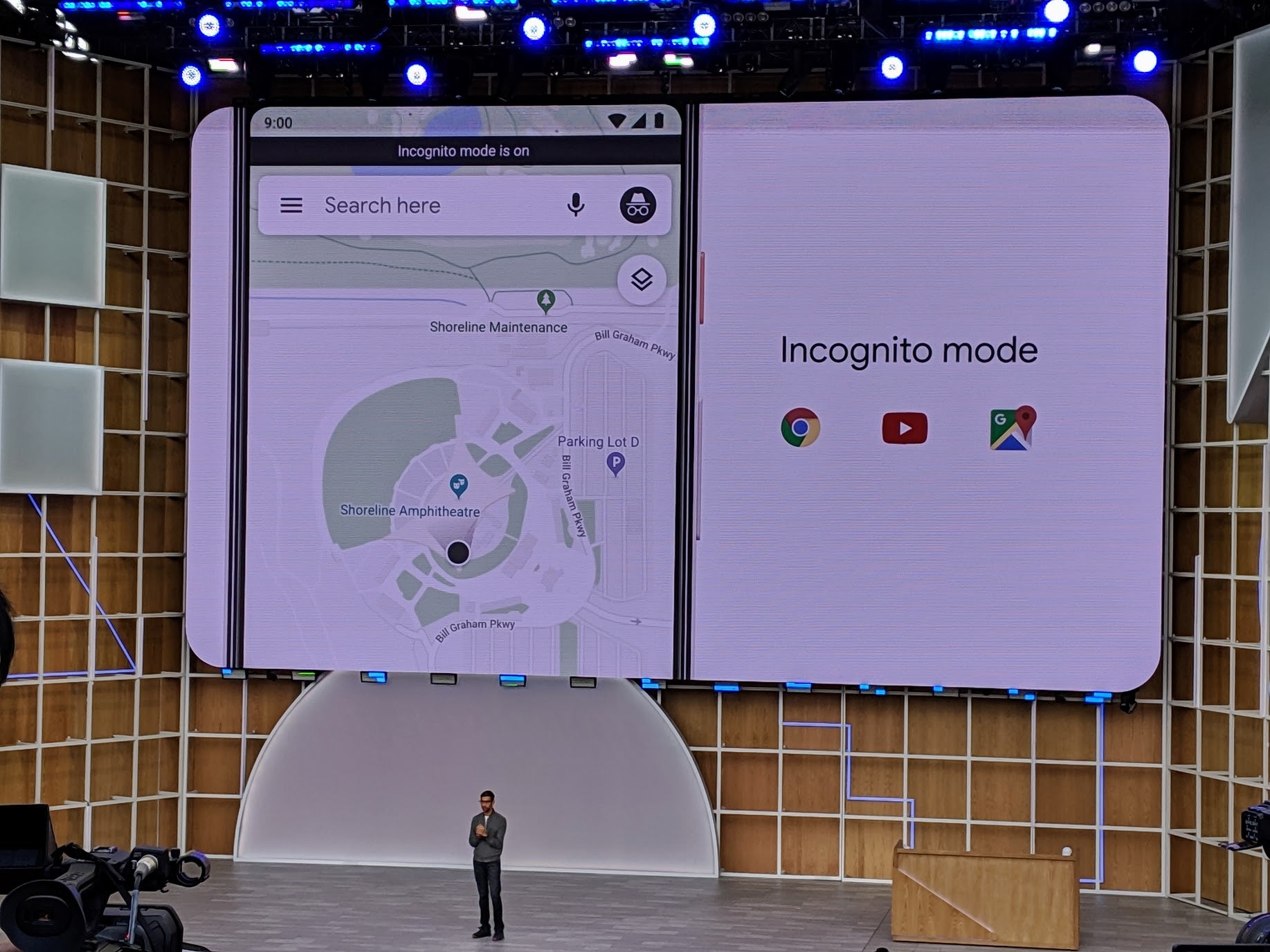 If you’re not keen on having your whereabouts dumped into your Google profile—as in, the location data Google keeps on you to provide more relevancy for your life and search queries—but that fear only applies when you’re driving around to certain activities, worry not. You’ll soon be able to easily trigger incognito mode for Google Maps (much like you’d do on Chrome and YouTube) later this year. I won’t ask what you’re up to. 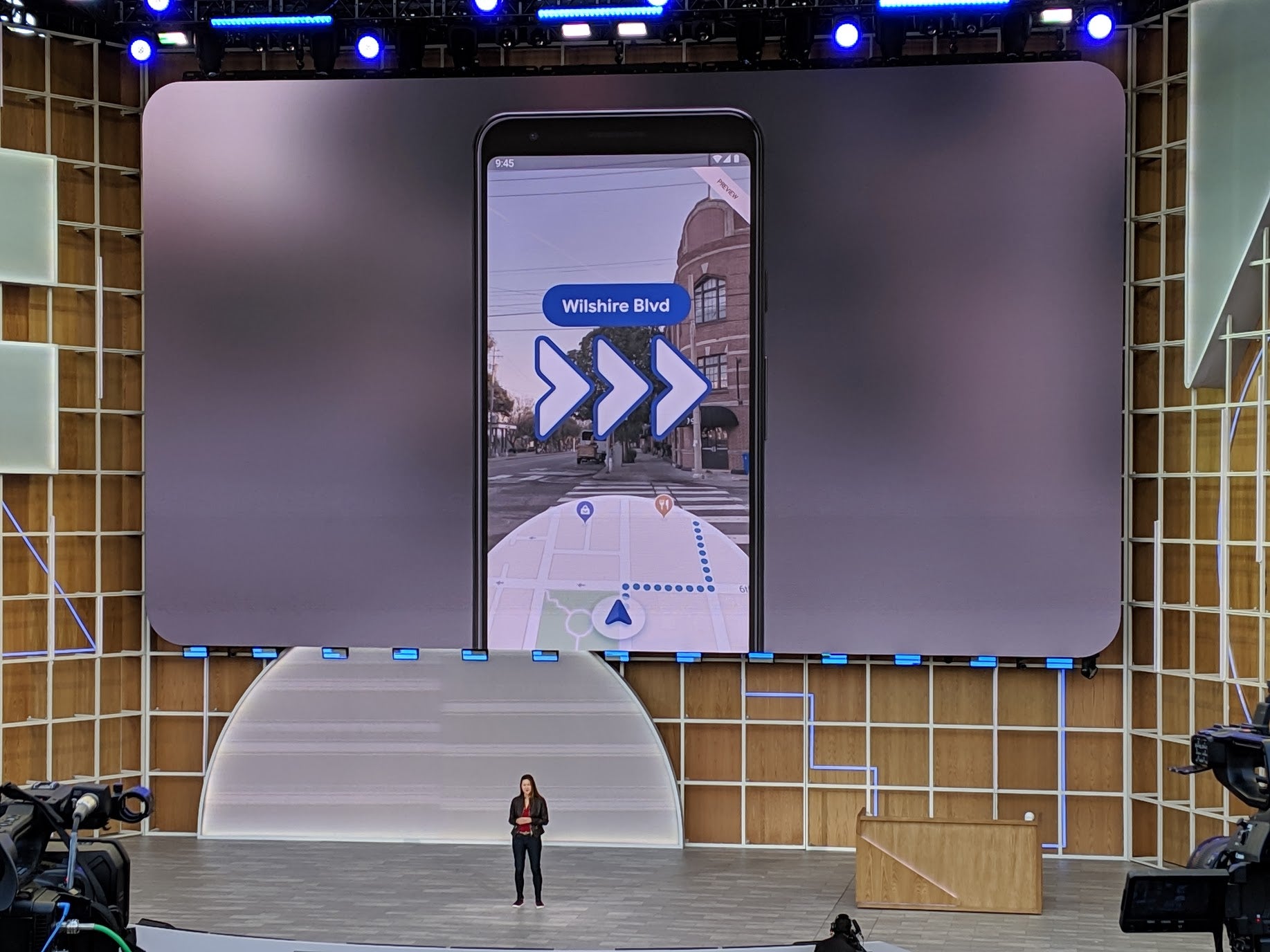 If you’re a Pixel smartphone user, you’ll now see a much different version of walking directions via Google Maps than before. Instead of an boring blue dot on an artificial map, you’ll get arrows superimposed in the real world to show you where to turn next. Big cheers at Google I/O for this one, because everyone has to figure out how to get back to the Google shuttles at some point.

Automatic deletion of web and app activity (if you want)

Google’s previously announced feature that lets you now set a deletion time for activity the search giant has stored—your web and app activity, for now—is rolling out today. 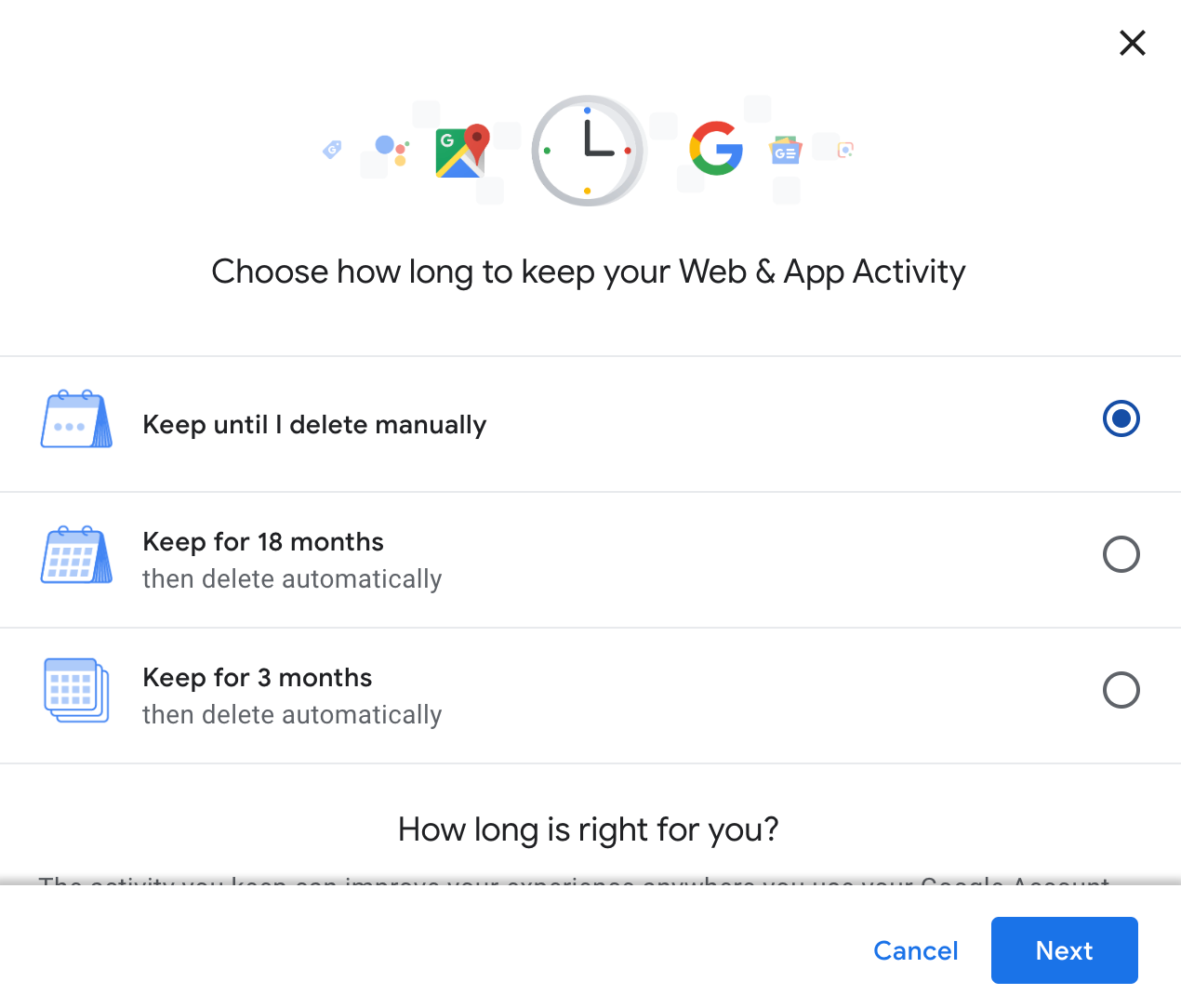 I’m pumped about this one, if people even still use the word “pumped,” because it makes data privacy more automatic. You can tell Google to keep your web and app activity until you manually delete it, or you can have Google automatically delete anything older than 3 or 18 months.

What opened my eyes most about the Google Pixel 3a and 3a XL — beyond just their prices, at $649 for the Pixel 3a and $799 for the Pixel 3a XL —was their battery life. According to Google, the devices’ machine-learning capabilities work to squeeze up to 30 (!) hours of uptime on a single charge. That seems like a lot, and likely a bit of marketing fluff, but we’ll see how early reviews go. (Google also says you’ll get a meaty seven hours of battery life on a single 15-minute USB-C charge.)

Oh, and the new Pixels come in a “Purple-ish” colour, too. Cheers all around at Google I/O, almost as much as the crowd enjoyed the healthy amount of shade Google tossed Apple’s way during the Pixel phones’ debut: 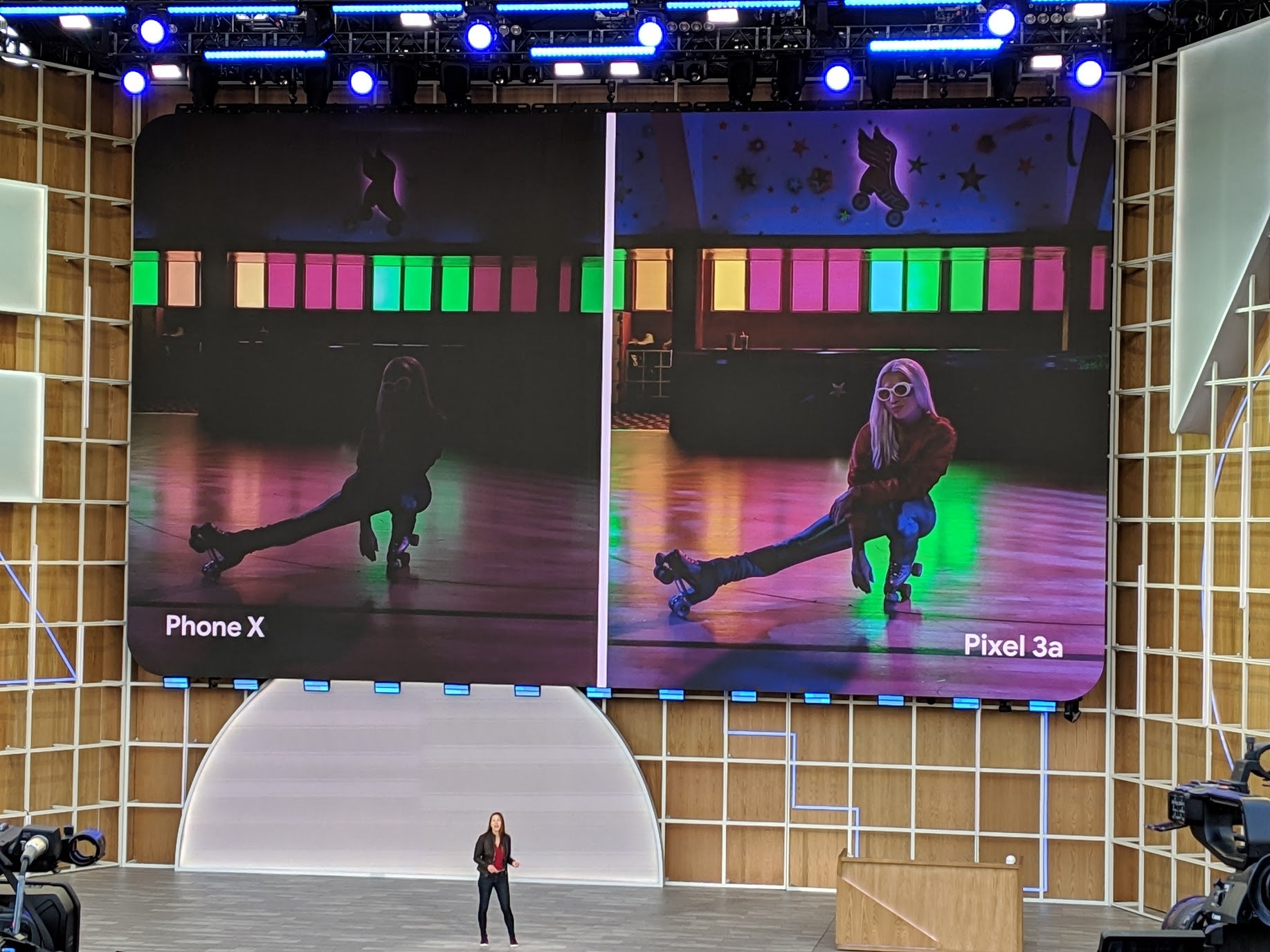 One of the more eye-opening demos Google showed at this year’s I/O was an updated version of Google Assistant. Basically, Google fed its little digital helper six cups of coffee and let ‘er rip on stage. Coming to Pixel phones later this year, the “next-generation” Assistant can understand requests up to ten times faster than before—apps open nearly instantly after a voice request, for example, and you don’t even need to say “Hey Google” while you’re monologuing things for your Assistant to do.

In said demo, the real-time processing of the Googler’s voice appeared in the lower-right corner of her Android device, which elicited a “holy crap” from some of the people sitting around me. I don’t blame them; the processing, which also has to take into account whether you’re dictating or asking for an action to occur, is incredibly quick.

A new “Driving Mode” for Android Auto, which you launch by simply telling your device “Hey Google, Let’s Drive,” gives you a brand-new UI for accessing directions, calling contacts, and playing media—to name a few options.

While you’re driving, new songs that pop up appear at the bottom of your Maps directions to keep you from losing focus on the road (or said navigation). When someone calls while Maps is running, your Assistant will tell you who it is and ask you if you want to answer the phone.

Look for the new driving mode to hit any Android phone (with Assistant) this summer.

Everything is a Nest

Google’s Home devices are all now rebranded Nest, which makes it a lot easier to keep tabs on everything. The Google Home Max Nest Hub Max is the first major Google product announced under the new naming conventions, and it’s a doozy: An upgraded Google Home Hub (er, Google Nest Hub), that gets a 25cm screen and all the fun features of a Nest Cam. That includes letting you dial in to view what your camera sees at home, auto-centering when you’re talking on a video chat, and motion-sensing for when you’re away.

There’s a new Face Match feature that lets the device serve information to different people in your house that’s relevant to them, if they’ve allowed the device to first “scan” who they are. 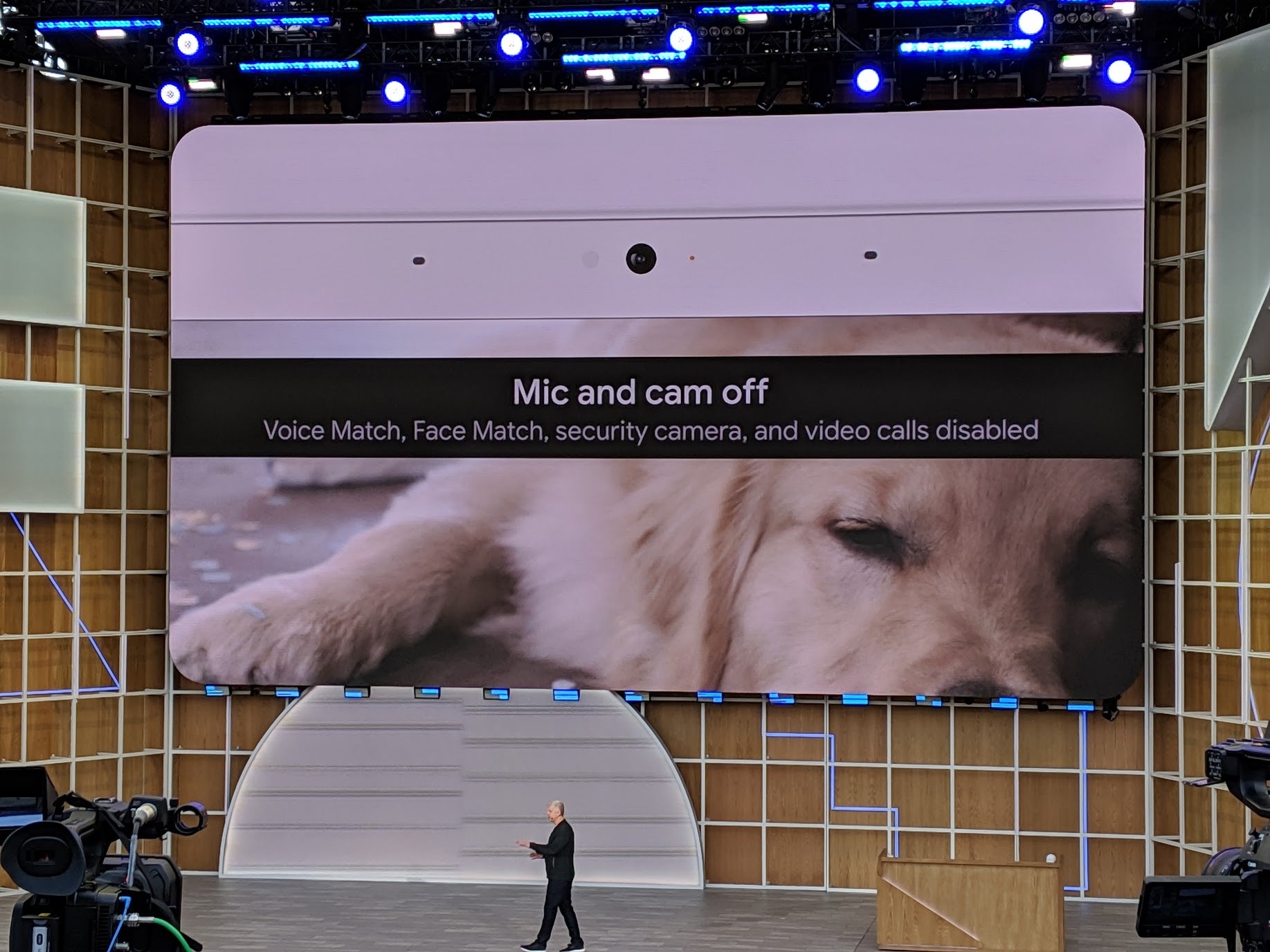 As before, a physical button allows you turn the included microphone on and off (and you’ll see on the screen, very clearly, when you’ve done so). Most importantly—and this feature got the biggest cheers at Google I/O—you can now simply give your device’s camera a “stop” gesture, raising your hand to it with the palm facing out, if you need to give it a command while you’re rocking out. That’s a lot better than having to awkwardly scream “HEY GOOGLE” while playing music.

The headline says it all. The new Live Caption feature, arriving in Android Q, runs locally on your device (yes, even in Aeroplane Mode) and drops superimposed text on any video you’re watching on your device. The accuracy is what it is, but if you’re watching a video on the train and you forgot your headphones, or you need a little extra help because you’re hard of hearing, Live Caption is a treat. 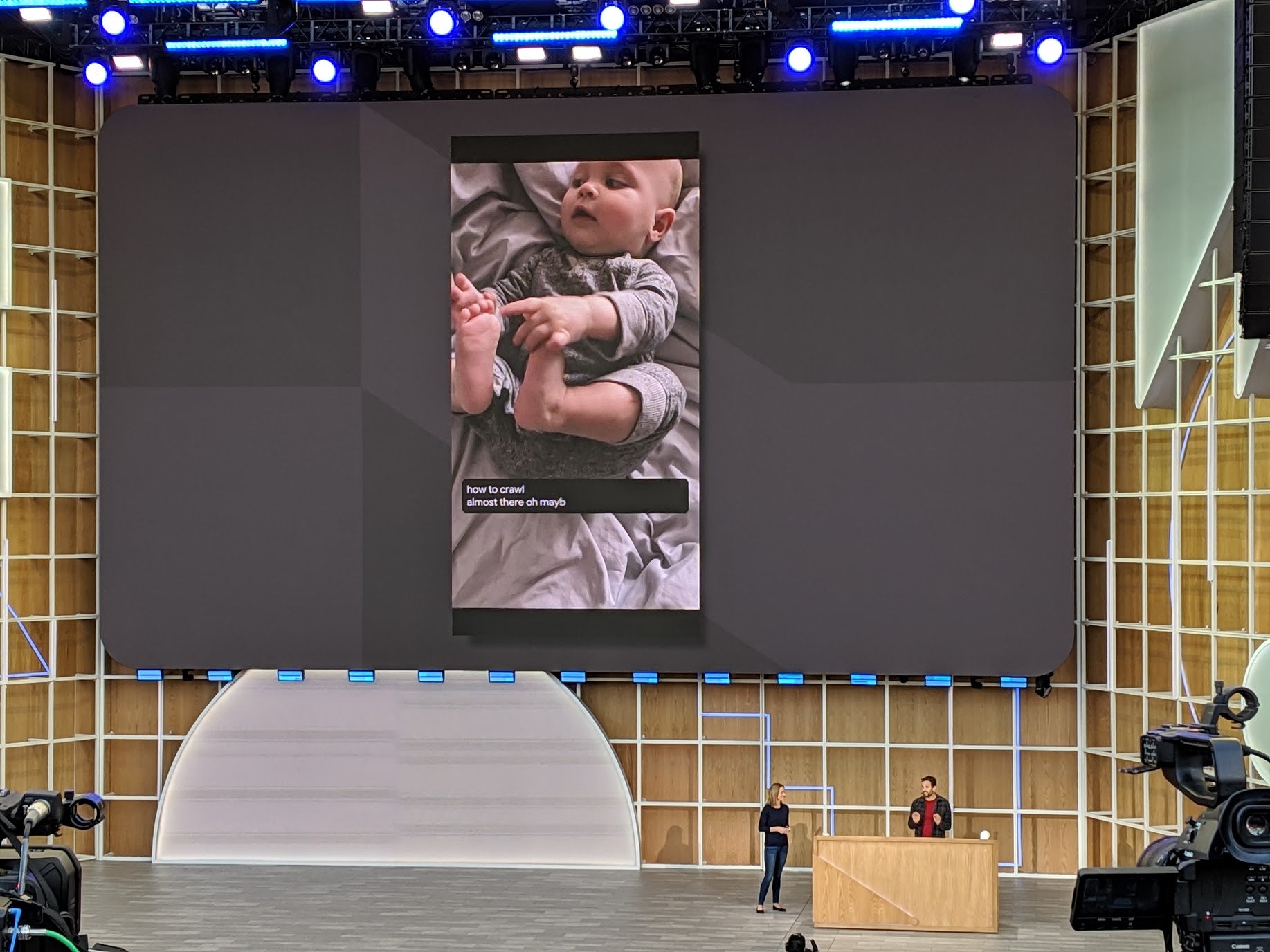 You have to first enable this feature in Android’s accessibility settings, but then the icon to toggle it will show up right in your volume UI. 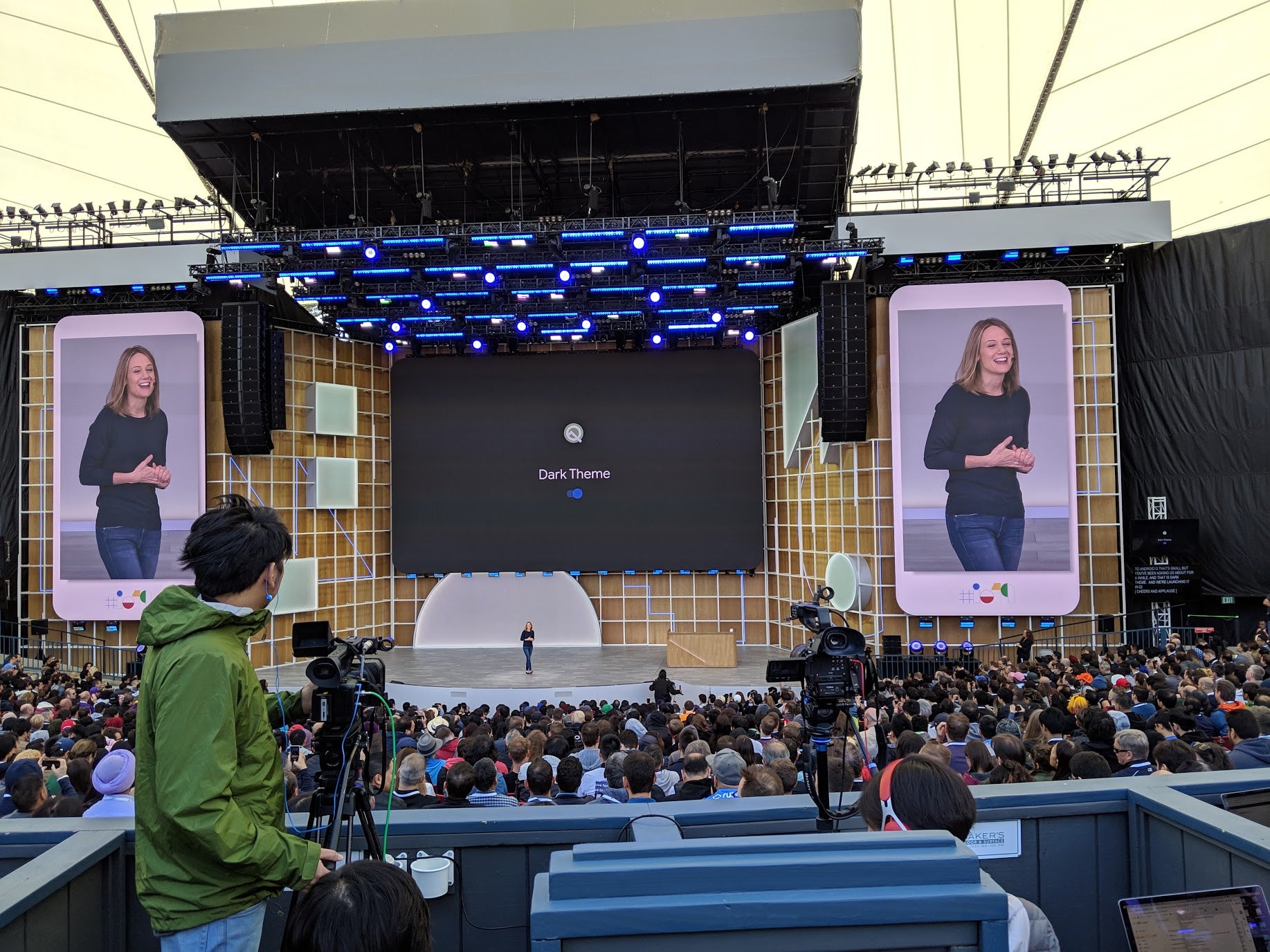 It’s here! Well, it will be here with Android Q: The ability to set up your device with a system-wide dark theme. Doing so won’t just make your device look a lot cooler, it’ll also help you save battery life. According to Google, dark mode means that fewer OLEDs on your device are lighting up and, as a result, you’re going to see a boost to your battery.

Google talked quite a bit about Android Q—and will have more to share throughout I/O, no doubt. One feature that caught my eye was Google’s new focus on bringing faster security updates to core modules of the operating system. These will now arrive separately, over-the-air, and without requiring a reboot of your device… with a few caveats. 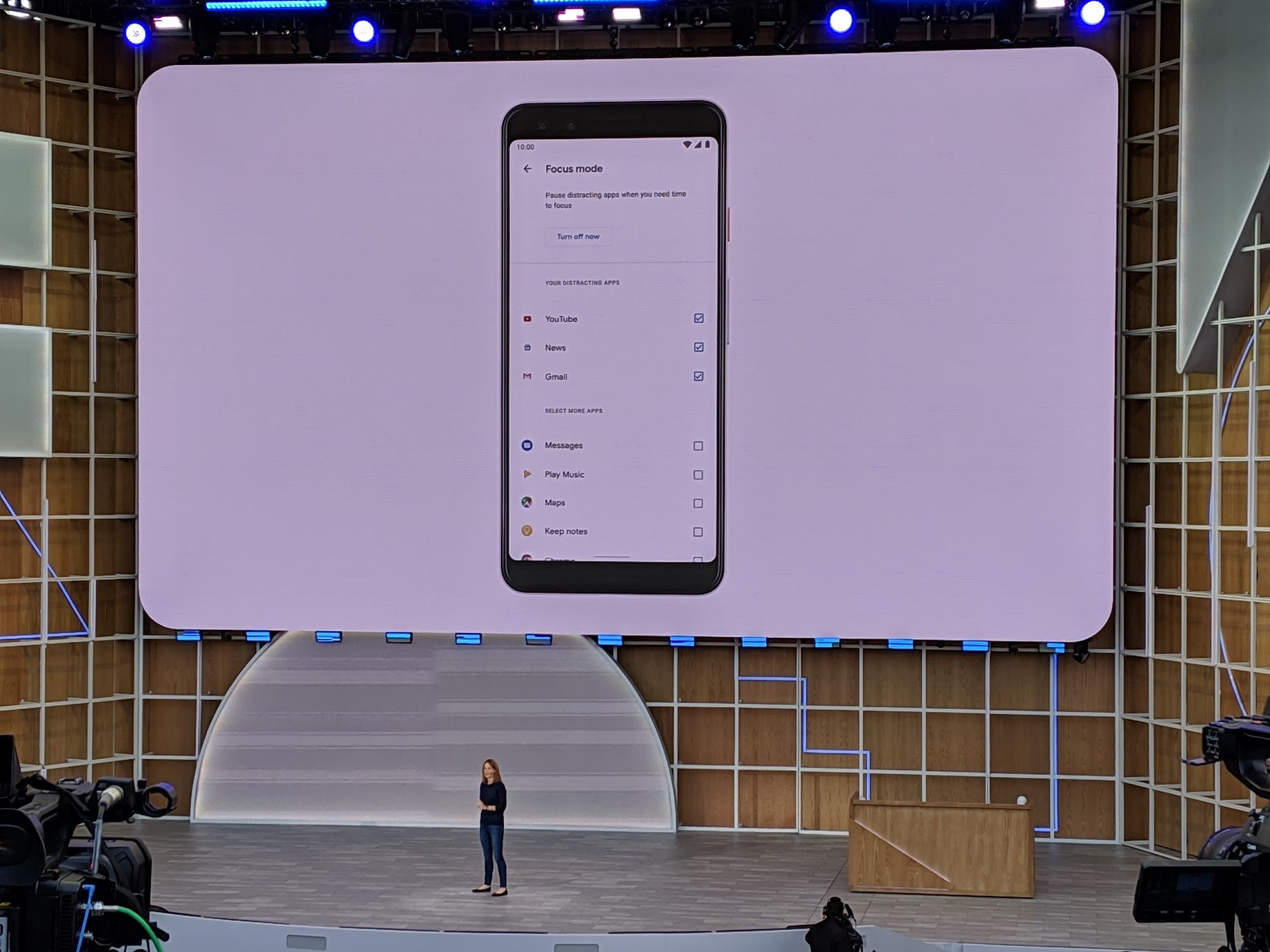 As well, I also enjoyed the new “Focus Mode” coming to Android Q, which lets you dictate which apps you find most distracting. Enable Focus mode, and (most?) notifications from these apps are disabled until you resume “normal” operations once again. The feature hits both Android P and Android Q this fall.

Finally, Android Q Beta 3 is available today on a total of 21 devices.

Google Search and augmented reality gets interesting and useful

I confess, I’ve been kind of ho-hum on augmented reality ever since the debut of Apple’s ARKit and Google’s ARCore. Fun as it is to drop a monster in your living room or shoot at some silly little creature, awkwardly holding a smartphone and walking around the coffee table in your living room doesn’t strike me as a very fun evening. Measuring IKEA furniture, sure, but that’s about it. 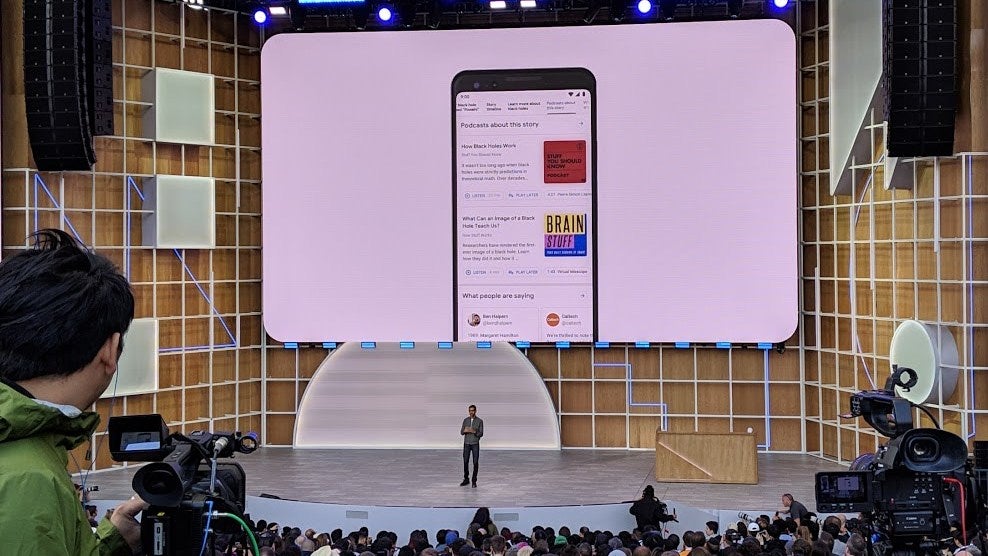 As part of a number of new fun features arriving to Google’s core search platform later this year—including “Full Coverage” in News, which provides a more comprehensive picture of a story, and indexed podcasts to provide relevant related information about a topic you look up—Google is also integrating Google Camera into Google search.

Assuming a source supports it, you can now tap to view a 3D model of what you’re searching for—be it a part of the human skeleton, stuff you’re looking to buy, or, to borrow Google’s example from I/O 2019, a big effing shark. You can drop that item into wherever you are, from your desk to your presentation stage, and see how it looks up-close. (Or, if you’re shopping, you can see how well something you want to buy integrates with your existing outfits or what-have-you.) 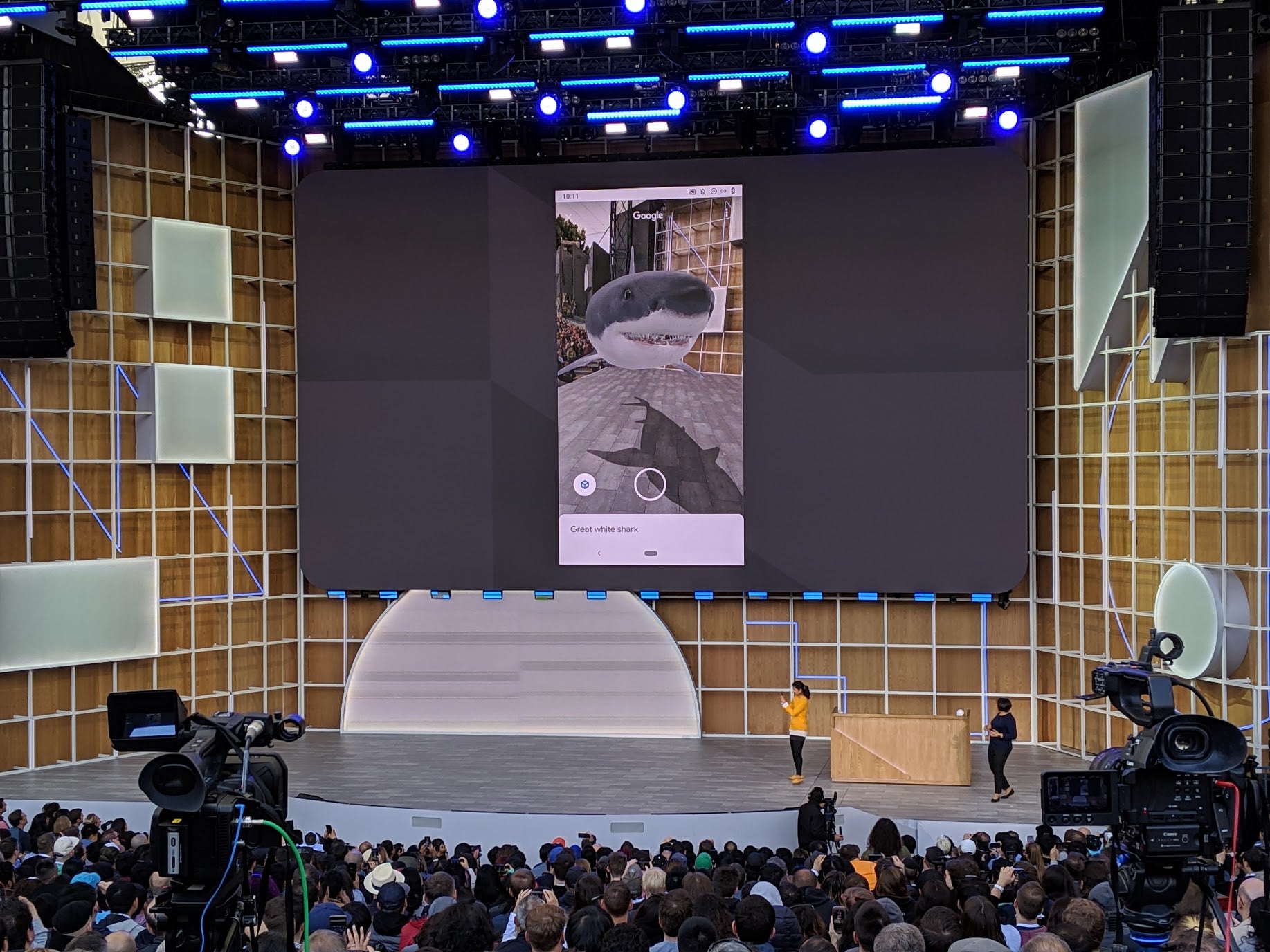 Google also showed a pretty amazing example of a new Google Lens application at I/O: point your device at a restaurant menu, and you’ll see relevant data on how popular particular dishes are—or, for people like me who are somewhat food-ignorant, you can also quickly pull up a picture of a dish you’re considering ordering. Most importantly, pointing your phone at the bill lets you quickly figure out the tip and split the total among your formerly hungry friends.

Will I use this? For everything but the bill-splitting, likely not, but that photo-of-menu-food aspect sounds intriguing.

Duplex on the web

Google didn’t have much to say about its new “Duplex on the web” initiative it’s working on—details coming later this year—but it showed off an impressive Duplex demo related to rental car booking. 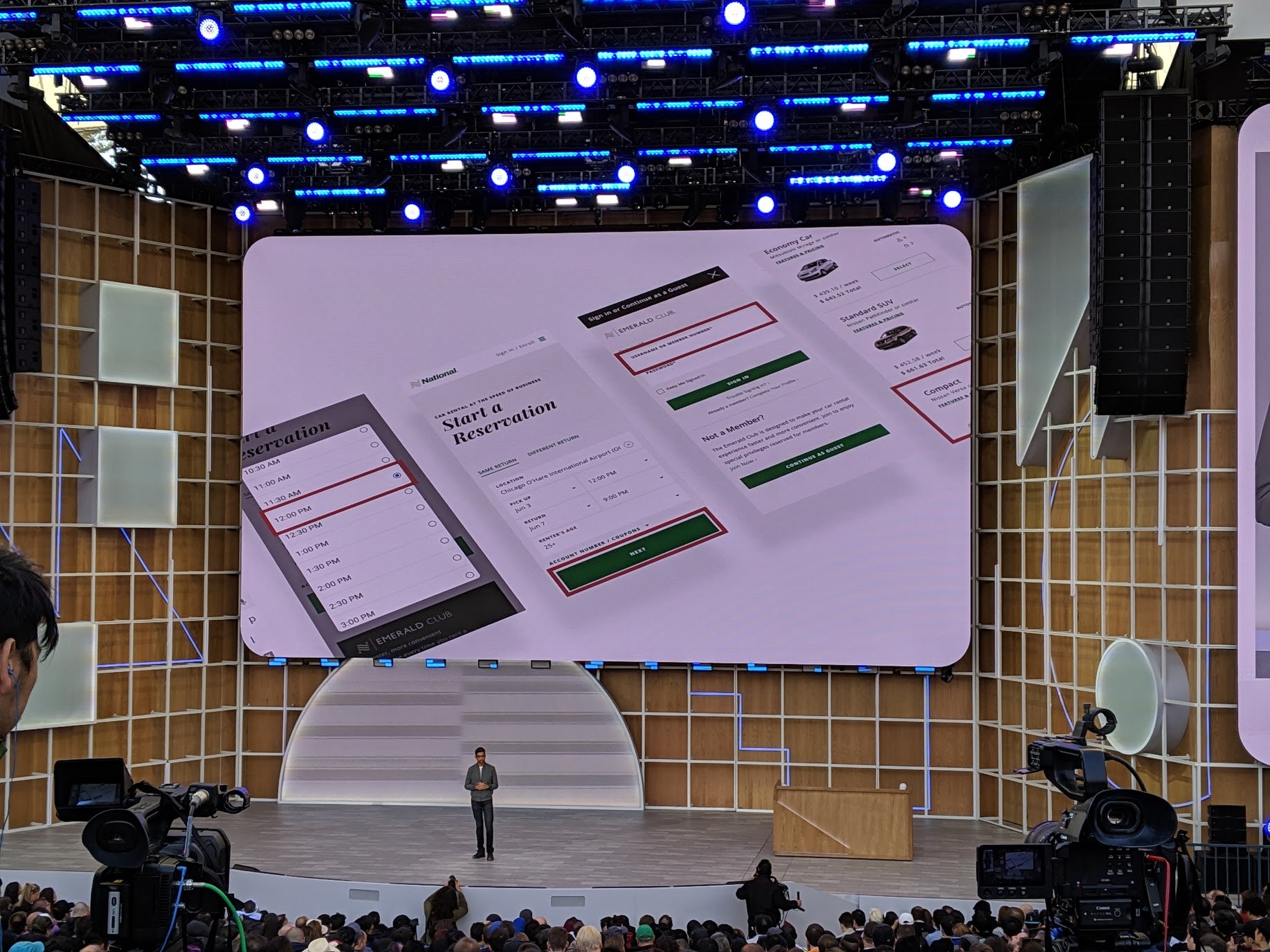 While the demo was neat, in that it pulled in a user’s existing information and preferences to automate much of the annoying multi-screen process of renting a car, the more important point was that Google noted how this setup required no special arrangement on Google’s part. In other words, this “Duplex on the web” functionality should make it easy to use AI to enhance a wide variety of ordering scenarios: movie tickets, food, car rentals, et cetera.