I am a secret picky eater, so much so that once at a holiday dinner I refused to eat the holiday dishes and instead ate nothing but bread with hot sauce. My hosts are still talking to me for some reason, but other hell eaters out there should take care not to follow in my incredibly rude footsteps.

It’s perfectly acceptable, when attending a dinner party, to alert your host about any dietary restrictions you may have, lest they accidentally kill you or attempt to feed you a dead animal that you’ve sworn to never ingest.

But for picky eaters, the etiquette’s a little different, since you can’t exactly demand your host not serve you anything that’s green or resembles an egg. Here are some tips for navigating gross food with grace.

The most important thing to know is that it isn’t a great idea to tell your entertainers you abhor certain foods. Though some dinner party hosts will ask their guests if they have any meal preferences, you can’t expect someone to listen to you ramble on for 10 minutes about how raisins are the food of the devil.

“If you are a guest, it’s not correct etiquette to list off things you like or dislike if the host does not ask you,” Myka Meier, founder and director of Manhattan finishing program Beaumont Etiquette, tells us. “If you’re accepting a dinner invitation, you have to be prepared that you may be served what you don’t like.”

One way to solve this, assuming your preferences are extreme, is to avoid dinner parties at all costs. “If you’re too picky of an eater and don’t eat many things, I probably wouldn’t accept a dinner invitation. That’s also not fair to your host,” says Meier.

But if you do decide to show up, consider pregaming dinner with a snack. For instance, “If you are going to a friend’s house and they’re cooking Thai food, and it’s very spicy, maybe that’s a good time to have a small meal beforehand,” Kelly Williams Brown, author of modern civility guides Gracious and Adulting, said.

You can also bring the snack with you. “Maybe arrive with a couple protein bars, so if you really couldn’t eat more than a couple of things, you can eat one or two of them,” Brown said.

Note that you should not pull out your own food and eat it at the table; excuse yourself and eat the protein bar in the bathroom, if you must. And if that isn’t going to be enough for you, make sure you have something to eat at home.

“There have even been times where I’ve had a little Tupperware of something in my car for myself, so if I’m truly starving, I can shovel down few bites after dinner,” Brown said.

If you’re going to a potluck, you get to bring your own food, so you’ll know for sure there’s something at the meal that you’ll like. But it still isn’t cool to attend with your own personal plate of mac and cheese and nothing else.

“Don’t show up with your dish and take three quarters of it,” Brown said. “Make sure there’s enough that you can get a portion and share it.”

If you suspect it’s the only thing you’ll be eating and you might want seconds or thirds, bring a larger portion. Or, as Brown points out, you can make yourself a plate at home to have beforehand. 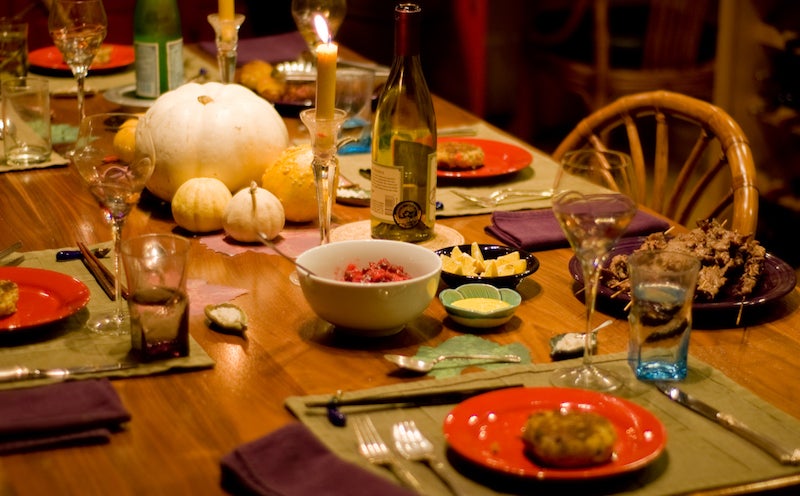 How To Politely Get Out Of Eating Food You Don't Like

Being a gracious dinner guest means finding polite ways to navigate prickly parts of the event - whether that's minimising awkward conversations or finding the right way to pass on a dish that makes your stomach churn. If you're headed to someone else's home for holiday feasts this year, here's how to turn down food you don't want to eat without coming across as rude.

This principle should serve you well in most aspects of life, but it is especially true at a dinner party. If you ultimately decide to put your fastidious taste buds to the test and show up at a meal, you are not obligated to eat every single thing you are served, but you should make a small effort.

“Other people put in hard work, so at least try other foods that are provided so you don’t offend anyone,” Meier said.

But while it’s important to sample as much as possible, you can get away with skipping some of the more offensive dishes.

“Typically speaking, a dinner will not just include one type of food. If you don’t like noodles, your host will not just serve noodles,” Meier said. “You can eat everything else on your plate, but not take any noodles.”

If it’s the main dish that’s causing you the most anguish, you still need to take a teeny bite. If you aren’t allergic to it, it probably won’t kill you, even if it makes your tastebuds squirm.

And if you try something that you know you truly cannot stomach, it’s fine to get rid of it sneakily.

“We’ve all had an experience where we have put a bite of food in our mouths and known immediately it needs to come right back out,” Brown said. “In those situations, I would note the best way to deal with that is to bring the napkin up to your mouth, discretely spit out the food, and hide the napkin.”

Of course, even if you’ve made the best possible effort to camouflage your poultry repulsion, someone may notice you’ve left some food on your plate. In that case…

Be positive, but don’t lie

Someone once served me a surprise dinner, and though I ate every single thing on my plate and praised him effusively, it was slightly awkward when he heard me rant about asparagus later down the line. Turns out, this is a no no.

“It’s not good etiquette to lie,” Meier said. “If your [host] says, ‘What, you don’t like the chicken?’ I would just say, ‘Everything is wonderful, I really enjoyed the rice and potato.’”

But positivity is key here. If you aren’t sure what’s in front of you, you are allowed to ask what you are being served.

“It is absolutely fine and OK etiquette to ask the host how to eat something, and what the dish is,” Meier said. “If you don’t eat liver and it is liver, it is definitely something you want to know so you don’t embarrass yourself or your host.”

“Asking curious, happy questions is always a great thing to do,” Brown said. And if you’re not too pleased with the answers you’re getting, don’t rain on everyone else’s parade.

“Someone may say, ‘Yes, this is haggis, it’s a sheep’s stomach stuffed with other sheep inside parts,’ and you’ll say, ‘I hear this is a national dish!’ and take teeny tiny little bite,” Brown said.

And even if you hated what you ate, you still need to compliment the chef. “You don’t even have to say that you love it or it’s delicious,” Brown said. “You can say that it’s ‘so bright’, or ‘so lively’.”

Basically, never tell the person who was kind enough to feed you that you hate their food.

“At the end of the day, when people have you over to their home and are cooking for you, that’s really a gift that they’re giving to you,” Brown said. “You’ve kinda got to suck it up.”

Stay away from the salt shaker

Sometimes I trick myself into eating something by dousing it with spices, but apparently this is not very nice.

“Never season your food if the chef is at the table. If they see that, that could be very offensive,” Meier said.

This holds true even if there’s salt and pepper on the table. “I would still advise being cautious, because the cook always notices,” Meier said.

If you’re the one hosting, offer a few diverse dishes

You are not obligated to take requests if you’re generous enough to make food for guests, though you should take care to ensure no one has, say, a nut allergy, so you don’t end the night with a hospital trip. If the group is small enough, though, you may find it in your favour to find out what people like.

“I always recommend asking,” Meier said. “The whole point of a dinner party is to have guests enjoy your meal and company, and there’s nothing more embarrassing than no one eating anything.”

Even if you don’t ask for suggestions, if you’re cooking a big meal, it’s a good idea to offer up a few options.

“I usually try to incorporate one of everything,” Meier said. “I always recommend having one vegetable dish, one meat and one fish. Just be cautious that there is something for everyone.”

And if you know you’re hosting some picky eaters, don’t be offended if they don’t clean their plate. Your friends might be monsters, but they love you enough to show up.

So… it isn’t cool to just eat bread and sriracha?

Nope. Never invite me to dinner.