How to Switch to Vertical Tabs in Edge Chromium

One of the features of being a reporter is you get a significant amount of unsolicited email, often from people that you don’t know. Discoverly is a Chrome extension that can help put those stranger’s emails into perspective.

The Chrome extension scans social networks and pulls up info for the people that are sending you mail, displaying it right in your inbox and giving you more of a big picture on who that person is before you respond.

For instance, let’s say someone named “Bob Smith” responds to an ad you’ve posted looking to sell your old motorcycle. Right next to the email you’ll be able to see that Bob works as an accountant at a firm downtown and that you actually have seven mutual friends on Facebook. 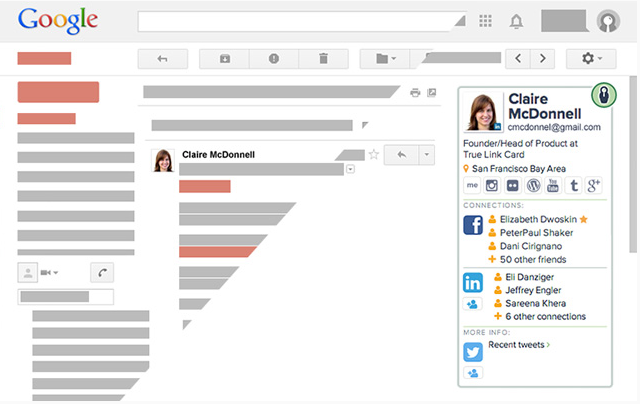 The service is capable of displaying a person’s work information as well as mutual connections and recent tweets with Gmail, effectively helping you confirm a person is who they say they are and allowing you to put them in context.

LinkedIn: see when you have mutual Facebook friends and tweets.

The idea here that you’re able to get a better idea of who you’re talking to without having to do a ton of web searches to get there. Knowing that you have a ton of mutual friends with Bob, for instance, might make you a bit more comfortable giving him your address to come pick up your bike.

Likewise, knowing you have friends in common with the person you’re interviewing with next week, or that they tweet a lot about roc climbing (your fave!), can help you create a connection with that person you might not have otherwise.

The more context you have, the better that email or job interview will be.