I’m David Raymond, Creator Of Gritty, And This Is How I Work

In 1978, Philadelphia Phillies intern David Raymond put on the costume of the Phillie Phanatic and introduced the world to one of the best-known costumed mascots in sports. After 15 years as the Phanatic, Raymond went into business creating his own mascots.

Now he’s created the most instantly famous mascot in years: Philadelphia Flyers mascot Gritty. (The working title for this post was “Gritty’s Daddy”.) We talked to Raymond about the path from Phanatic to Gritty, how to clean a costume, and why he switches to-do apps every two years.

One word that best describes how you work: Oh gosh, that’s easy: Fun.

My father was head football coach at the University of Delaware. He’s a local celebrity and icon, and all I grew up wanting to do was to play football for him and to be a coach like him.

I ended up going to Delaware and playing football for my father. He didn’t want me to be a football coach. He felt like that wouldn’t be the best path for me, thank goodness. He helped me get an internship with the Phillies in 1976. I was an intern for two years and then they created the Phanatic in ‘78.

Some of the skill set that helped me be a good performer was understanding an athlete’s perspective. And then of course [the perspective of] a Philadelphia fan — I knew that as well as anything, because I was one. That set me up for success as a performer.

As a performer I learned everything I needed to know about developing a great character brand, even though we didn’t call it that back then.

When I started the business, I wanted to create great character brands for companies so they could experience some of the same success that the Phanatic experienced, and the benefits that the Phillies got. What I learned from that is the most important thing on a 45,000-foot perspective is how powerful fun can be.

What the Phanatic taught me was that fun wasn’t only fooling around; fun wasn’t just a holiday. Fun is really a tool that you can use each and every day to make yourself happier, healthier and more productive. What we’re doing is we’re creating powerful fun. 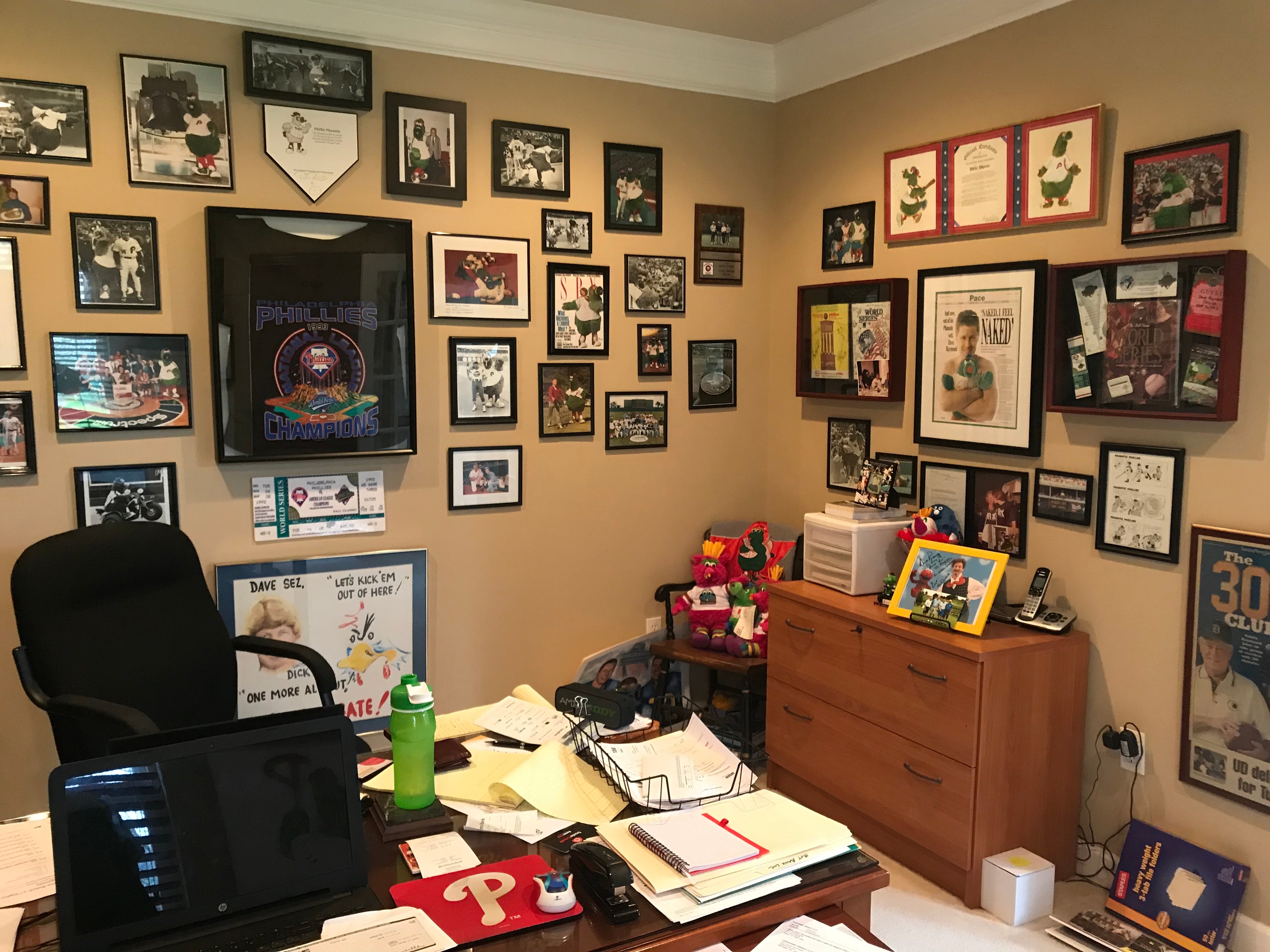 Every day is exciting for me, because I’m working with different people and different clients. So I’m on the phone a lot, and I’m on social media. And then I speak in front of groups, not only in the Philadelphia market but all over the country as a keynote speaker, so I’m constantly meeting people face to face.

My day is always different. The only monotony I find is that I do have an office at home. I’m dealing with a client need, some design function that we have to review, and I’m doing the laundry.

Anybody with a home office space recognises that they get distracted by things in their home. So each day I’m getting up, looking at my priorities, making sure I’m focused on that. I’m posting regularly, I write blogs and then I’m talking to clients.

How has the reception of Gritty felt? It seems like this might be the most high profile launch that you’ve had for a character.

I was interviewed by the local News Journal here in Wilmington, Delaware, and I think that is exactly what I said. I don’t think there’s been more [reaction to another mascot].

The difference is there was really no negative kickback with the Phanatic. And the Phanatic has been on every television show; he’s been all over the world. But he did that over a 40-year career and counting. Gritty seems like he’s canvassed the entire world in two weeks.

So it’s been pretty amazing and very fun for me to watch obviously, because I’m connected to the project, being one of the people that the Flyers turned to to try to get this done correctly.

I also know the performer very well — that was part of my job, was to also find a good performer — and I’m very happy and proud of him too, because he’s very talented and he deserves all this.

I’m doing all of my work on my phone, and I have a Lenovo Yoga laptop small enough to thrown a bag and go on a plane easily. An IT problem can shut you down quickly, so I’ve got a good IT company locally to handle all that.

I have a radio app where I can listen to my home radio. I’m a big sports fan so I listen to Philadelphia WIP sports radio anywhere where am in the country.

What’s your workspace setup like? Who’s at the office?

Then I have a studio I’m leasing with people to do all of the sewing, cutting, sculpting. I have a designer in Atlanta, Georgia, who’s been working with me for over 10 years. We’re very lean and flexible, and profitable because we’re lean.

One of the most fun things I do is go into the studio space. We have creative people with work tables and sewing machines and vacuum form machines and painting stations, all kinds of wonderful creative things. I’m in there managing the build and making sure that it’s done to our specifications.

Take us through an interesting process you have in place at work. Your site mentions the cleaning and repair of mascot costumes.

We unpack the shipment, itemise what’s in there and then determine the problem. The client generally will let us know what some of their concerns are. Then it goes into the studio. I have a handful of spaces I can get the costumes to. We have experts who can sew and fix problems. That can take anywhere from a week to two weeks.

Then there’s a full cleaning and disinfecting of the costume. We wash what we can wash. What we don’t, we put into a little locker that shines ultraviolet light that kills the bacteria, and sends warm air through to dry the costume.

So the costumes won’t smell after they dry, which is which is a big problem with our business — bacteria smells and performers’ safety. 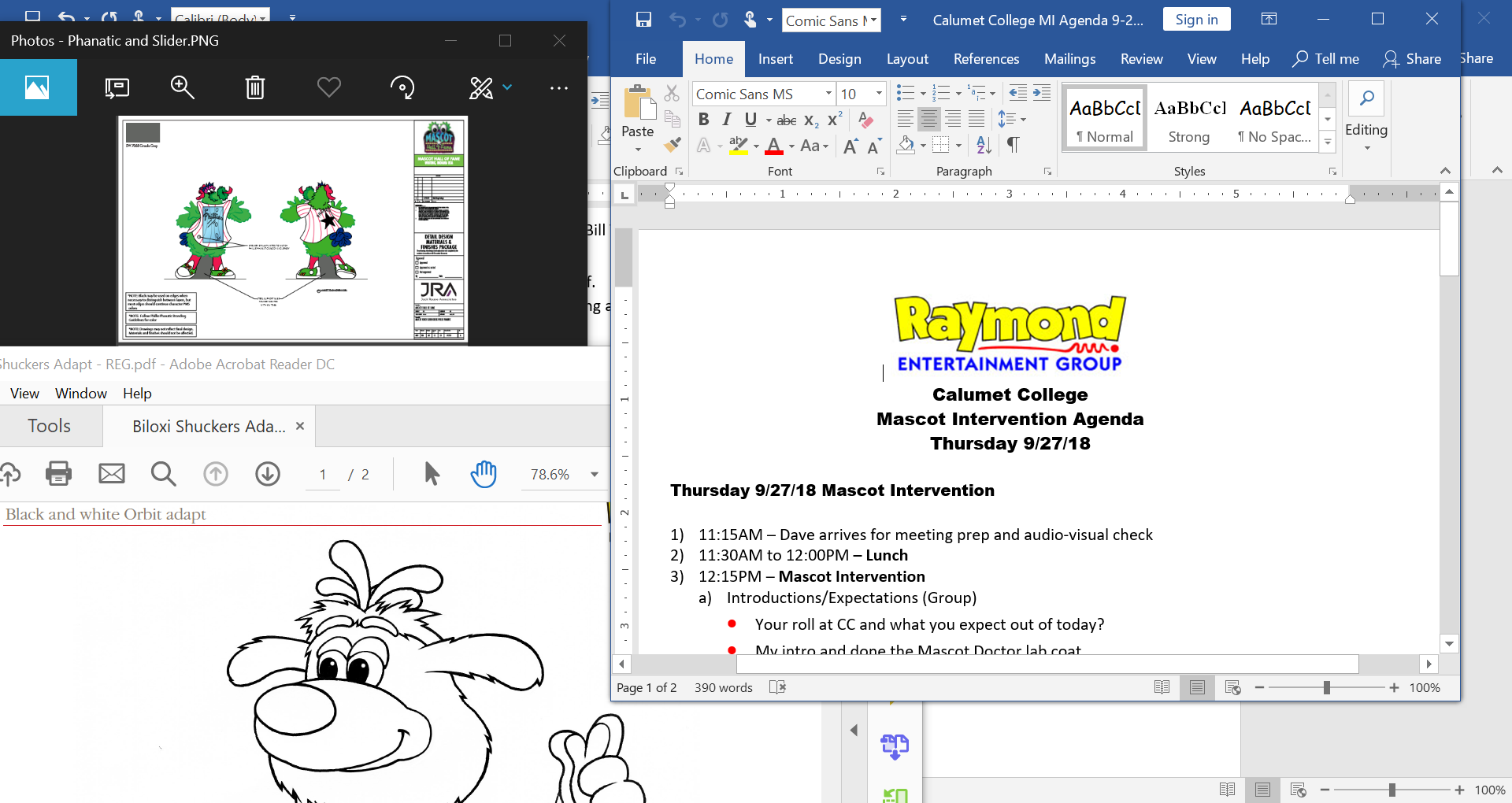 In a Word document, I have a list of to-dos each day. I put them in categories, whether it’s public speaking, character branding, marketing and sales, financial, and I have a category for “stupid stuff”. You’re going to drive yourself crazy if you think everything you’re going to do is going to be perfectly on point and worthwhile. It’s great to fill in the stupid stuff.

The thing that’s funny is, usually after two years I get tired of [my current method] and I’ll do it some other way. It may be on my phone, it may be Outlook.

I used to think I was failing myself when I quit one. Then I realised I would just migrate to another form. For a month I’m not organised because I’ve just gotten tired of one method, and I just design another one. I start thinking, “Hey this is great, it’s new and it’s easier to do.”

My life hack is a 30-minute walk every day. Stephen Covey talks about “big rock” events: Schedule the big things in first, so the small things can kind of filter in through it. It’s a double rock event in that it’s healthy [physically and mentally]. I meditate a little bit but I end up walking more.

While walking, I just let my mind wander. If I’ve had a struggle trying to think of something creative, it usually comes to me. I write blogs every other week, so my blog topic usually pops into my head when I’m doing that 30-minute walk.

I love to sketch and draw. I’ll grab a picture of my kids and try to sketch them, learning about how to use shading. Mostly pencil sketching, a little bit of coloured pencils.

I read more to distract and entertain myself than to learn, much to the displeasure of my brother in law, who is a very successful business person. He’s always trying to give me a new book and asked me if I’ve read it and I said, “No, I put it in the stack with all the other books you’ve given me!”

I try to read self-help books and I never finish them. I feel guilty but I realise they just don’t get through to me. A lot of those, you’ll read the first three or four chapters and it seems to be repetitive, trying to tell you the same thing in 15 different ways. And I just end up putting it down. [But] Stephen Covey, I was a big fan of his, and Seth Godin.

I do audiobooks. I’ve read every single John Grisham novel that he’s written — including the ones [outside the legal genre], A Painted House and Playing for Pizza.

I’ve read most of Stephen King’s early work, like Pet Sematary and It. I always hate it when they make a movie out of his books because they never hold up to the books.

Somebody like Justin Timberlake. I kind of look at him like a modern-day Sammy Davis Jr, who can sing, dance, act, he’s funny… That’s who I’d like to be, somebody who can sing and dance and entertain like that.

My dad used to tell me to stop talking so much — and then look at the job I got! I got a job that shaped the rest of my business career by not saying anything.

But my dad’s issue was, he didn’t want to bother people. If you’re going to build a business, you have to realise you’re not bothering people. You’re trying to help people. So it’s the best advice and the worst advice in one fell swoop.

Really what he was saying was listen. And I think listening is the best advice you could give anybody. If you even pretend to be listening, you’re going to be liked more. If you really do listen, you’ll get smarter and you will be able to help people better.

I’m not a huge Tony Robbins fan, but he has a talk about the six things that we all want. The most important is to contribute. We do all want to contribute.

I still haven’t figured that out yet. I haven’t made myself comfortable with the fact that I contributed. And that is a daily struggle. I’m starting to give myself a little bit of leeway and credit, but it’s not easy.