I’m Cartoonist Lucy Knisley, And This Is How I Parent Lucy Knisley has made a career out of sketching her life. Her latest graphic novel Kid Gloves details her difficult transition into motherhood—from fertility problems to miscarriages to a near-death experience during childbirth. It’s both intimate and highly informative, illustrating the science and history of reproductive health. (I learned that women wore corsets during pregnancy up until the 1910s, which doctors finally starting realising that’s not such a great idea.)

Knisley also just released a picture book called You Are New, which celebrates the joy of being a baby. She lives with her partner John, her kid that she refers to as “Palindrome”, and a cat named Linney. Here’s how she parents. 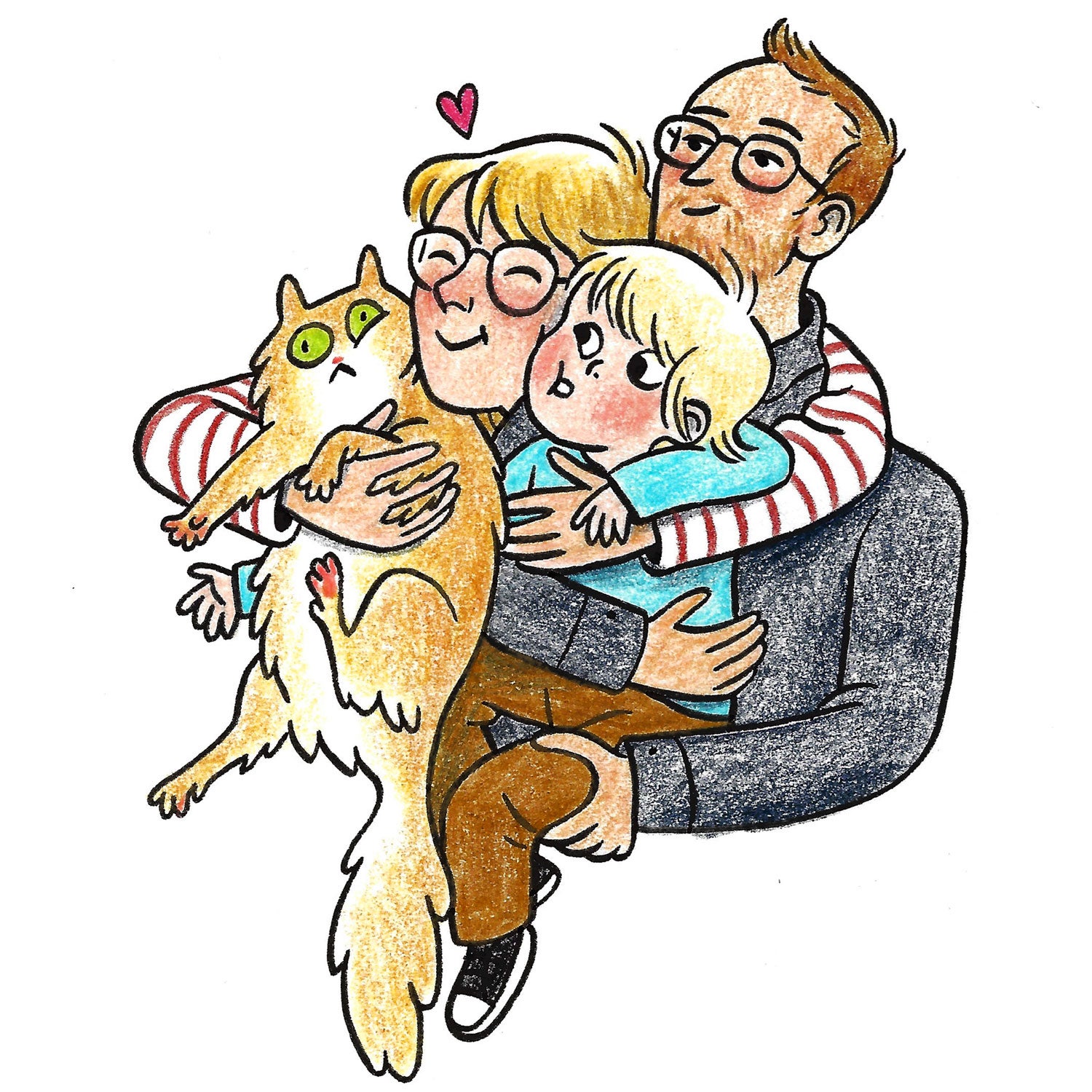 I grew up with a literature professor dad and a chef/artist mum, so while I was lucky enough to imagine a future of being a writer or an artist, I didn’t put those two ideas together until I was in college, and suddenly realised that the comics I’d been making in my sketchbook were what I wanted to do all along. That was a surprise, as well as the idea that I could actually make a career out of it. I’ve been very lucky and very happy in the work I’ve gotten to do.

Well, I work from home, so it’s not so much getting out the door as getting everyone else out the door so I can get to work. We get up around 6 with our kid (his choice, not ours) and I’ll usually get him pottied and dressed while my partner makes coffee and gets breakfast ready. We eat yogurt and granola and fruit, usually, and then begins the dance of trying to get a toddler to put on boots and a coat. He goes to preschool three days a week, then we have the nanny here for one day and the last weekday he’s with me. So it depends on the day, but usually everyone gets to where they need to be by 9 a.m. I’m at my desk by 9, too, and try to stay there and not get too distracted until around 3:30 when I go pick up the kid from preschool.

We lucked out with an amazing nanny, Angelika, who we’ve had working part time since our son was 14 weeks old. It was great, because I could build trust with her taking care of him in the house while I worked, and could nurse him when he was a hungry baby. She’s also an artist as well, so we have things in common and can chat about work. It helps keep me focused to know that she’s in the house and I can’t just laze around even if I’m tired, because I’m paying her for the privilege of working!

Now that Pal’s in preschool three days a week, we only have Angelika come once a week, but she sticks around in the evening so my partner and I can have a date night. It’s absolutely wonderful and I love her. We also have my partner’s parents coming in every other week for an afternoon, and they’re always awesome with doing some laundry or taking the little dude out for an adventure while I get some items checked off the list. 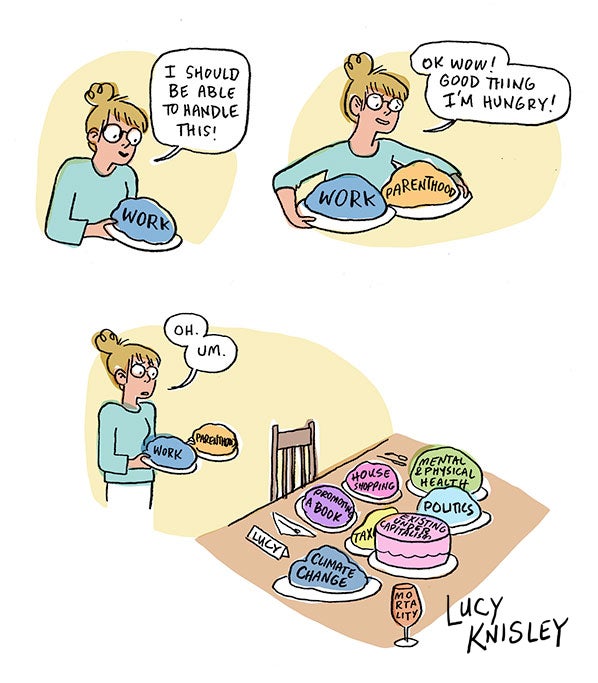 Have you come across a parenting product that’s been life-changing? 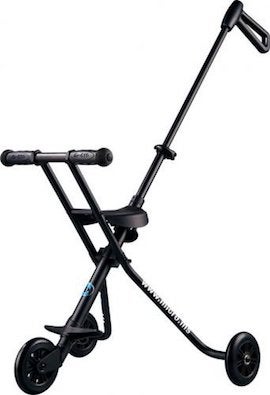 I think every parent goes through some serious stuff when their kid is a newborn. I’ll add that I had undiagnosed preeclampsia, and almost died in childbirth. We were all hanging by a thread. That’s when they get you! I would pay any amount of money for any item that promised to make parenting a baby any easier. I bought these BabyBackups that helped keep blowouts from happening. We had The Shusher, and Merlin’s Magic Sleep Suit (this last one seemed to be the most helpful in those early days).

Now that he’s older, we don’t rely as much on gadgets, but I do really like our Micro Trike, which is like this foldable pushable scooter thing. It gets small enough to fit in an overhead, and lets him feel like he’s riding a bike instead of being in a stroller, which he never liked. We use it for travel a lot, and it always gets lots of comments from parents.

Yes, it’s amazing how productive you get when you’re paying for the privilege to work.

It’s saved us from being buried in stickers that have been stuck on every item of furniture and wall in our house, and I highly recommend getting yourself an extensively stickered didgeridoo of your own.

Why did you decide to create a graphic novel about pregnancy? 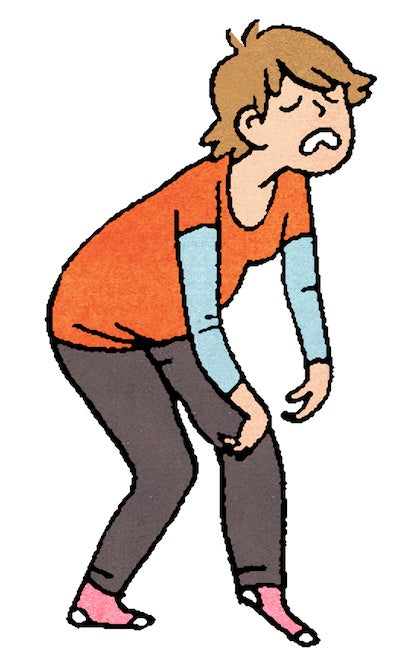 I’ve always been fascinated by reproductive health. In fact, from an early age, I wanted to be a midwife. I’m a cartoonist now, but making this book is something of a fulfillment of a childhood dream. I didn’t anticipate that my own pregnancy would be fraught with troubles and medical drama (as it was), but I did know that it would be a wild ride and transitional state, as it is for everyone who goes through it, and that aspect of it fit with my work, and my documentation of those states of transition.

You’re also constantly learning, as a soon-to-be-parent, and so many of the things I was learning were information that had never been taught in my sex-ed classes. I wanted an honest book, full of facts and truths, written by someone who had gone through it, and a lot of the books I was finding were very clinical, or written by a male doctor. So this is the book I wanted, both when I was a kid who wanted to know more about reproductive biology, and as a hopeful parent, wanting to know I wasn’t alone.

Don’t buy any shoes, if you’re pregnant or planning to become pregnant. I had to throw away all my shoes when I went up a size after pregnancy. I’m still mad about it.

I dreaded having a picky child. I was a good eater, and my parents never fed me anything other than what they were eating, so I learned to love food from an early age, which became the subject of my book, Relish. But my husband subsisted on a steady diet of chicken fingers for years of his life (not due to his parents so much as his stubbornness), so I worried our kid would take after him. So far, Pal is an amazing eater and his favourite food is salmon, so I’m glad I’ve been able to carry on with how my parents instilled a love of (good) food in me.

Naps, when I can get them. I used to be a champion napper, but my kid hates sleeping, so my nap times have been brutally cut. Now if I get the opportunity to nap, it’s like I’ve won a free spa day.

Currently, it’s whenever he poops in the potty. But I’ve also been so bowled over whenever he does something kind and sweet, unprompted. There’s a new kid in his class, and he came home talking about telling him where things were in the classroom, and I thought I’d faint with pride.

Whenever I lose my temper. This potty training stuff is so hard, and you don’t want to scar them forever and make weird toilet associations! But by the fourth time in one day of being pooped on, your temper is hanging by a thread. Yesterday I went “Augh!” and just stormed off, so that was a pretty low point.

I hope he learns empathy and kindness. It’s something I’ve always prided myself on, and my partner has also taken pride in. I want him to consider others; the earth, strangers, friends, family, animals.

After his bath time at night, I like to swaddle him in a towel and carry him around for a while, talking about my newborn baby. This is endlessly funny to both him and me, as he’s easily forty-five pounds by now, and barely fits in a towel. I think it’s a way we like to reclaim our birth experience, as his birth was traumatic and fraught with medical drama, so taking him fresh from the tub and cuddling him like a newborn infant is healing for both of us. My partner always kinda rolls his eyes, but he gets it. I hope Pal lets me do it until he’s like 18.

Whenever we’re having a rough time—sleep-deprived, potty training, starting preschool and the accompanying endless parade of sicknesses—my father-in-law likes to say, “You’re in the thick of it, now!” I’ve always appreciated that sympathetic indicator that this won’t last forever. It’s such a kind and thoughtful way of allowing us to step back and look at where we are and see a past and future where it was different—maybe not easier, but different. My partner and I like to talk about how adult life (work, friends, health, family) is a full plate, and adding parenthood is like a second full plate. It’s a lot! But it’s a good thing we’re hungry!

After his bath time at night, I like to swaddle him in a towel and carry him around for a while, talking about my newborn baby. … I hope Pal lets me do it until he’s like 18.

Talk about the help you get! Appreciate it vocally, because plenty of other parents struggle and believe that everyone else is doing it without help. It’s unhealthy to expect people to do it all on their own. I’m always so glad to hear about the help people get— it doesn’t diminish your accomplishments as a parent or a professional, it lifts up all working parents by releasing us from the burden of expecting us to somehow have 48 hours in a day!

I worried, before I became a parent, that I’d lose motivation to make art due to fatigue or parental distraction. The opposite has held true, for me. My kid is so funny, and making art about parenthood has been my salvation — it’s allowed other parents to feel less alone while making me feel less alone. So if you’re worried that having a kid might derail your artistic ambitions, please don’t!