How To Turn Google Calendar Into Space Invaders

Google’s April fools gimmicks for 2019 have been pretty fun. Not only can you turn maps into a game of Snake, you can also turn Google Calendar into the arcade-classic Space Invaders.

You’ll get a pop-up box explaining how to play (use the left and right arrow keys to move, space bar shoots), and a pretty decent-sounding excuse to justify playing a game instead of actually accomplishing tasks on your to-do list. 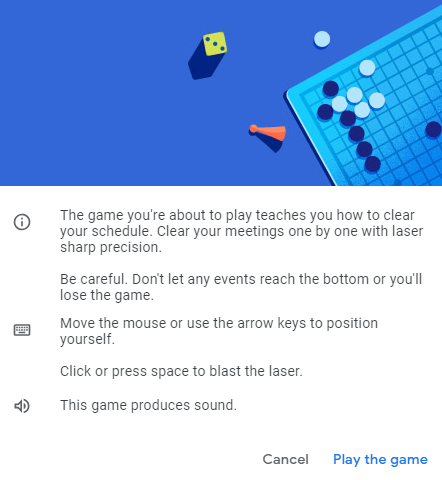 In classic Space Invaders fashion, the point is to stop the enemies from getting past your ship (or in this case, a notification pop-up), but the enemies increase in speed and number as you complete successive waves. The more waves you complete, the higher your score.

This version of the game pulls your Google Calendar tasks to act as the enemy invaders and fills in the gaps with extra tasks with silly names like “Platypus,” “Corkscrew,” and other random nouns.

Shooting your laser is accompanied by a cute “Pew! Pew!” sound effect, and a “wah wah wahhh” game over jingle if a task manages to creep past you.

While we don’t claim this to be a productivity-increasing tool by any means, the game is a neat little time killer with some clever touches that are a step above most of the April Fools nonsense that normally floods the internet each year.