How To Spice Up Gmail’s ‘Smart Replies’ With Random Poetry

emailextensiongmailsmart reply
To sign up for our daily newsletter covering the latest news, hacks and reviews, head HERE. For a running feed of all our stories, follow us on Twitter HERE. Or you can bookmark the Lifehacker Australia homepage to visit whenever you need a fix.

Chrome: Not all hacks have to make you a productivity wizard. Some only need to make you happy, and add a little joy (or confusion) to those you email, too. At least, that’s the best way I can think of to describe the Chrome extension “Suggested poems for Gmail,” a brilliant little service that drops a literary bomb on Google’s normal suggested autoreplies in Gmail.

The extension is pretty simple. Install it, and generic Gmail autoreplies like “Great!” or “Sounds good,” which you’ll sometimes see suggested at the bottom of emails you receive, transform into something far more interesting. As the extension’s description indicates:

“Once you install this extension, suggested replies in Gmail messages will be replaced with lines of poetic verse drawn from thousands of lines of public domain poems.”

I told you it was easy. While you have no control over that which gets suggested for you, some of the options can be pretty epic: 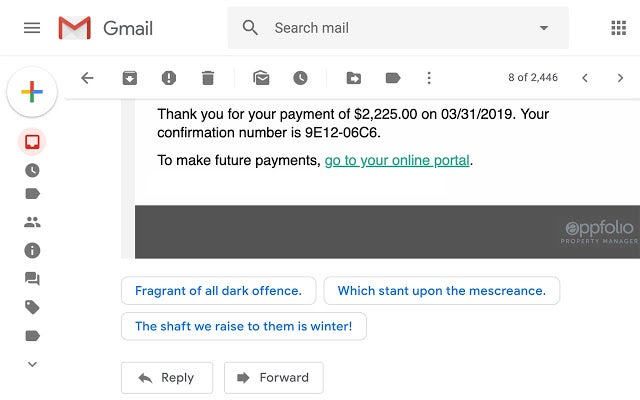 While I wouldn’t recommend using the extension for your work email, it’s certain to add a little fun to anything the conversations you’re having with your friends. Perhaps a suggested line will have such an impact on you that you’ll be tempted to look up the source of the material. You never know.

Google hasn’t officially endorsed the extension, but developer Chris Zubak-Skees has received praise from members of the Gmail team — including those directly involved in Smart Replies themselves. Not bad!

Chris, this is amazing. I wish we had thought of it!