How To Make Your Own Duke’s-Style Mayonnaise

I am fully aware of how this sounds, but I only eat homemade mayo. It’s partially a budget thing and partially out of convenience—even in large quantities, mayo is incredibly cheap and easy to make — but more than anything else, it’s about flavour. Homemade mayo will always taste fresher and just plain better than anything you can get out of a jar.

Except, maybe, for Duke’s, an American brand mayo that was once available at Woolworths stores across the country, but is now only available if you import it online from the American Amazon store page. Otherwise check your local speciality stores and international food sections at your local grocers.

On some level, mayo is mayo is mayo: It’s all just oil emulsified with eggs and vinegar. But on another, perhaps truer level, it’s so much more than that — and the cultish following Duke’s brand loyalty has is undeniable proof. 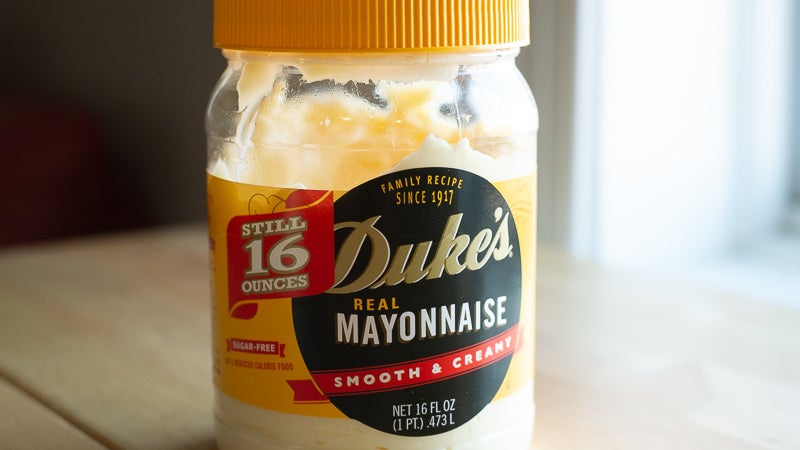 Since I’ve never lived anywhere Duke’s is sold, I didn’t get to try it until a trip to D.C. last month. Make no mistake: it’s worth the hype. Duke’s is saltier, creamier, and so much tangier than any other mass-produced mayo I’ve tried, and I fully understand why people go nuts for it. But why it so good? What trade secrets are hiding in the ingredients list? 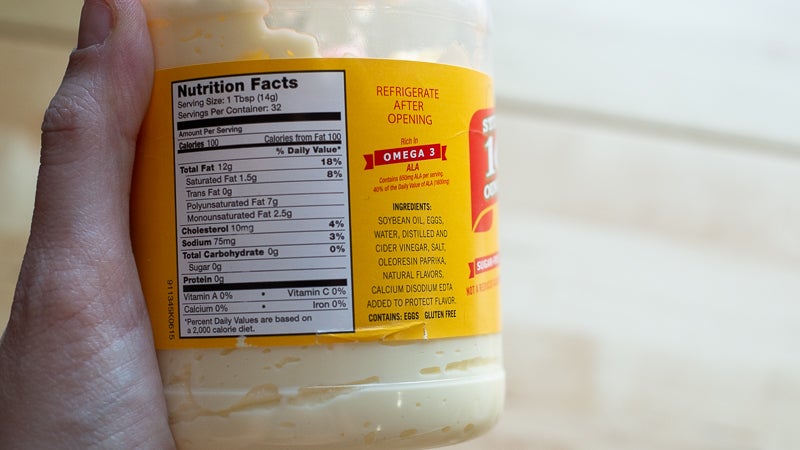 None, at first glance. In fact, with the exception of oleoresin paprika (which is a vegetable oil-based food dye derived from red peppers) and calcium disodium EDTA, I bet you have all of these in your pantry right now.

But let’s take a closer look. When you’re dealing with something as simple as mayo, every single ingredient choice makes a huge difference in the outcome, and this is definitely the case for Duke’s.

Every item you see on this list — and at least one you don’t — has a specific purpose:

While the ingredients determine the overall taste and texture of your mayonnaise, the basic technique never changes — and it could not be easier.

If you have eggs, oil, salt, both white and cider vinegars, and an immersion blender, you’re less than 5 minutes away from your very own jar of Duke’s. 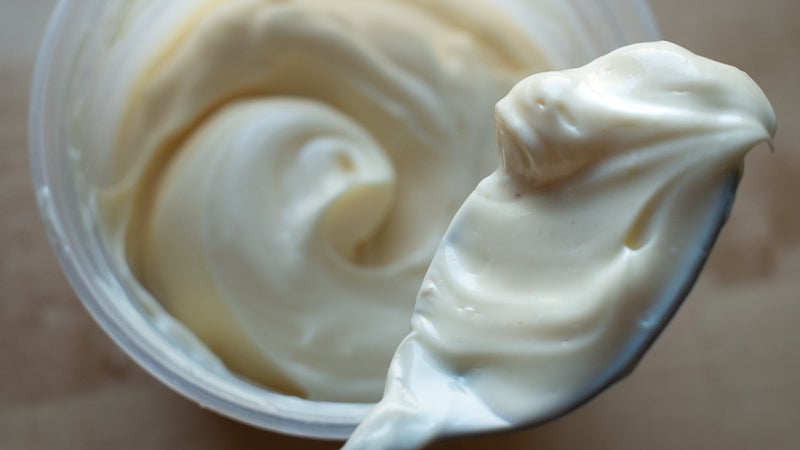 Check out those swirls and whirls! (And that one undissolved spot of paprika.) (Photo: A.A. Newton)

This tastes almost exactly like the real thing, but I prefer the smoother, lighter texture you get from raw eggs. Commercially-produced mayo uses pasteurised eggs, which increase shelf life and generally make for a thicker final product with a pronounced “wobble.”

If you need that wobble — or you’re worried about salmonella—you can totally pasteurise eggs at home, though I can’t say I’ve ever bothered.

Select a 2-3 cup container with tall sides, and check to make sure it’ll fit the head of your stick blender. Once you’ve confirmed that it does, crack in the egg and add the vinegars, salt, and paprika. Without stirring, pour all of the oil directly on top, then leave the mixture alone for about 30 seconds so it can fully separate. 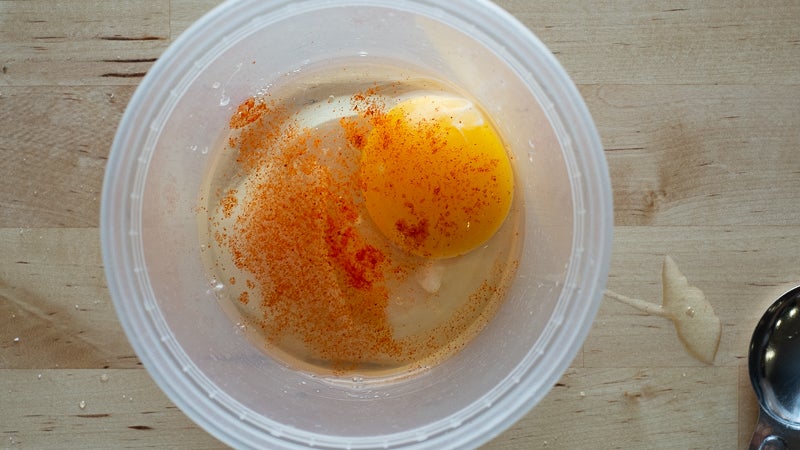 Stick the head of your stick blender right in so it rests on the bottom of the container. Let the mixture settle again, just for a few seconds this time — you want the oil and liquid to be totally separated until the second you start up the blender.

Keeping the blender totally still, turn on the power. Don’t move the blender at all for at least ten seconds: the vortex created by the blades will gradually pull oil down into the liquid, emulsifying all on its own.

When the bottom part of the mayo thickens and turns pale yellow, slowly rock the blender from side to side to introduce more oil into the emulsion. Finally, pull the blender up and down like you’re making a puréed soup, until all the oil is incorporated and the mayo is thick and creamy. 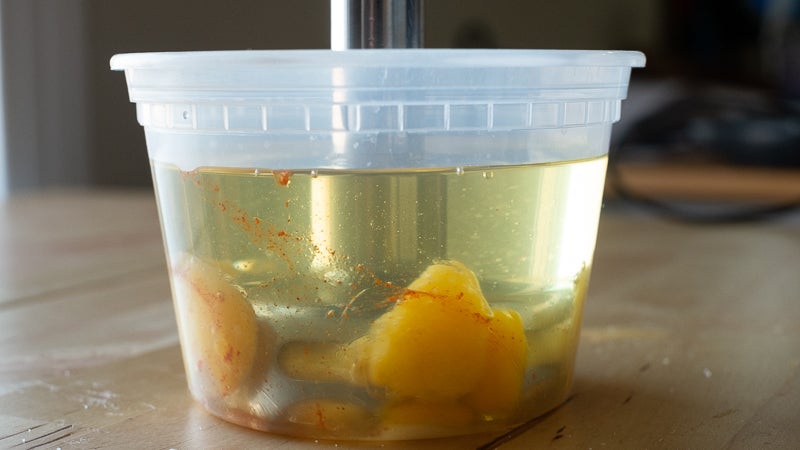 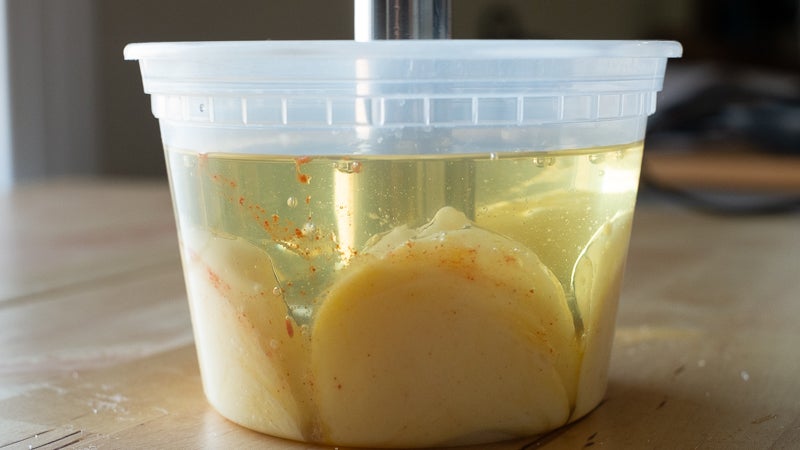 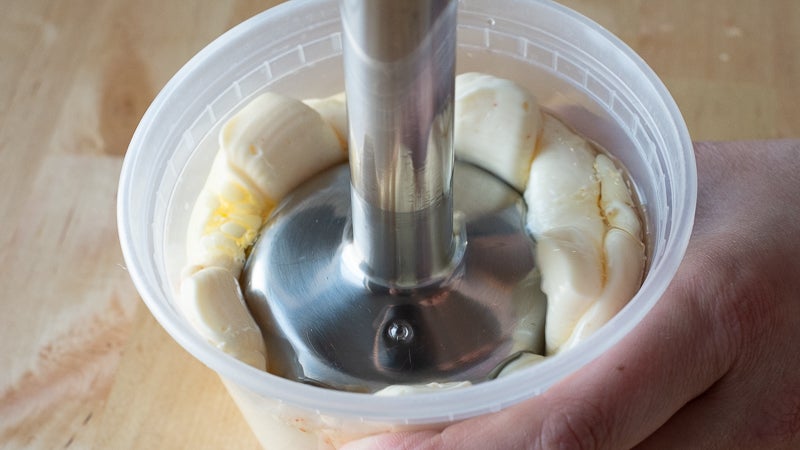 Thomas Lawn)” loading=”lazy” > From this angle, you can see how much bigger the container is than the head of the blender—and everything worked out fine. (Photo: Thomas Lawn)

Tap and scrape whatever’s on the blades back into the container, give everything a stir, and have a taste: it should be creamy, super-tangy and well salted. If you think the balance is off, gradually stir in small amounts oil, vinegar, or salt to taste. Don’t worry — unless you add, like, a quarter cup of oil all at once, it’s not gonna break on you.

Congratulations! You just made mayonnaise—and not just any mayonnaise. Just like Duke’s, this salty, tangy homemade version is miles ahead of anything that comes in a jar. 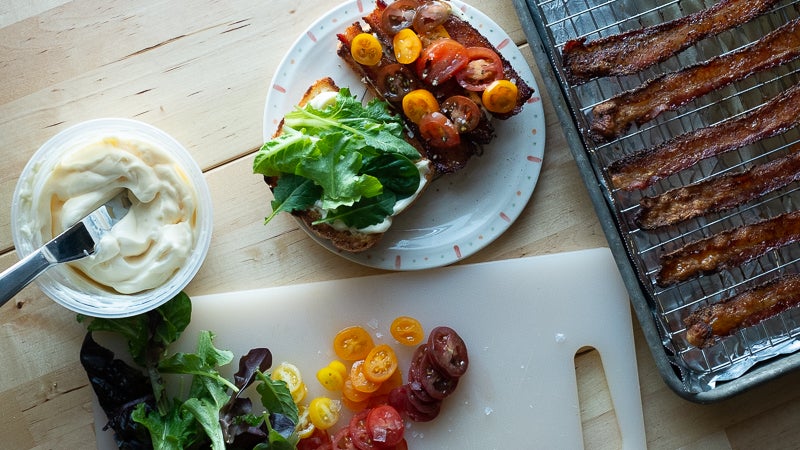