How To (Finally) Change Your Name On PlayStation 4

playstation 4ps vitaps3ps4psnsonyvideo games
To sign up for our daily newsletter covering the latest news, hacks and reviews, head HERE. For a running feed of all our stories, follow us on Twitter HERE. Or you can bookmark the Lifehacker Australia homepage to visit whenever you need a fix.

The time has come: Sony has finally announced it will allow PlayStation 4 owners to change their User IDs — the name you go by when you’re playing games online — starting later today.

The feature is a long time coming, and gamers, particularly those of us who have been hamstrung with the same handle since creating a PlayStation ID for the PlayStation 3, are thankful.

For something so coveted, you have to dig pretty deep into the PS4’s menus to get it. On your console, go to the Settings menu, select “Account Management,” then “Account Information,” then “Profile,” and finally “Online ID.”

Pro tip: It’s actually much easier to change your ID through your profile on PlayStation.com. To do that, sign in to your account, go to “PSN Profile” and click the “Edit” Button.

Sony will only let you change your account name once for free, so make sure to pick a good name in advance. After the first change, Sony will charge you $15 for every name swap, or $7 if you subscribe to PlayStation Plus, Sony’s premium online service.

Personally, I’d say you should do it. You wouldn’t want your friends to sever ties with you because they don’t know who you are, right? Plus, it just seems like the courteous thing to do.

Another interesting wrinkle: Technically, you retain ownership of any and all of your PSN ID names, so you can always revert back to an old handle free of charge.

OK, you know how to do it, but before you run off and change your name from XXXNaruto420GanjaStrikeInfiniteXXX to something more timeless, there are a few things we should go over.

As it turns out, Sony didn’t avoid offering this feature for years just to spite people: Changing your name can lead to complications with individual games, including losing progress and in-game currency in some games.

Sony has a large, multi-tiered list of PS4 games it’s tested for issues related to changing your name. You should definitely check it out before changing your ID, as it may impact something you’re currently playing or may want to go back to in the future.

The potential problems are broken up into two tiers: “issues” and “critical issues.” The standard issues are generally fixable or annoying, but will not affect your gameplay much. Some of the problems, like a game unlinking your PSN account from a publisher ID, or resetting customised settings like audio levels and controller mapping, can be reset.

The worst thing that can happen is that your name may be removed from a leaderboard. Depending on the game and how well you’ve done, that may be a big deal, but it won’t hinder your play in the future.

The “critical issues” are a bit more disconcerting. The games on this list may reset your game progress, including any record of in-game currency you may have purchased with real money. Some of the games, by Sony’s account, may cause “permanent game errors and data loss.” Sony recommends not changing your name if you plan to keep playing these games. Based on that description, neither do I. 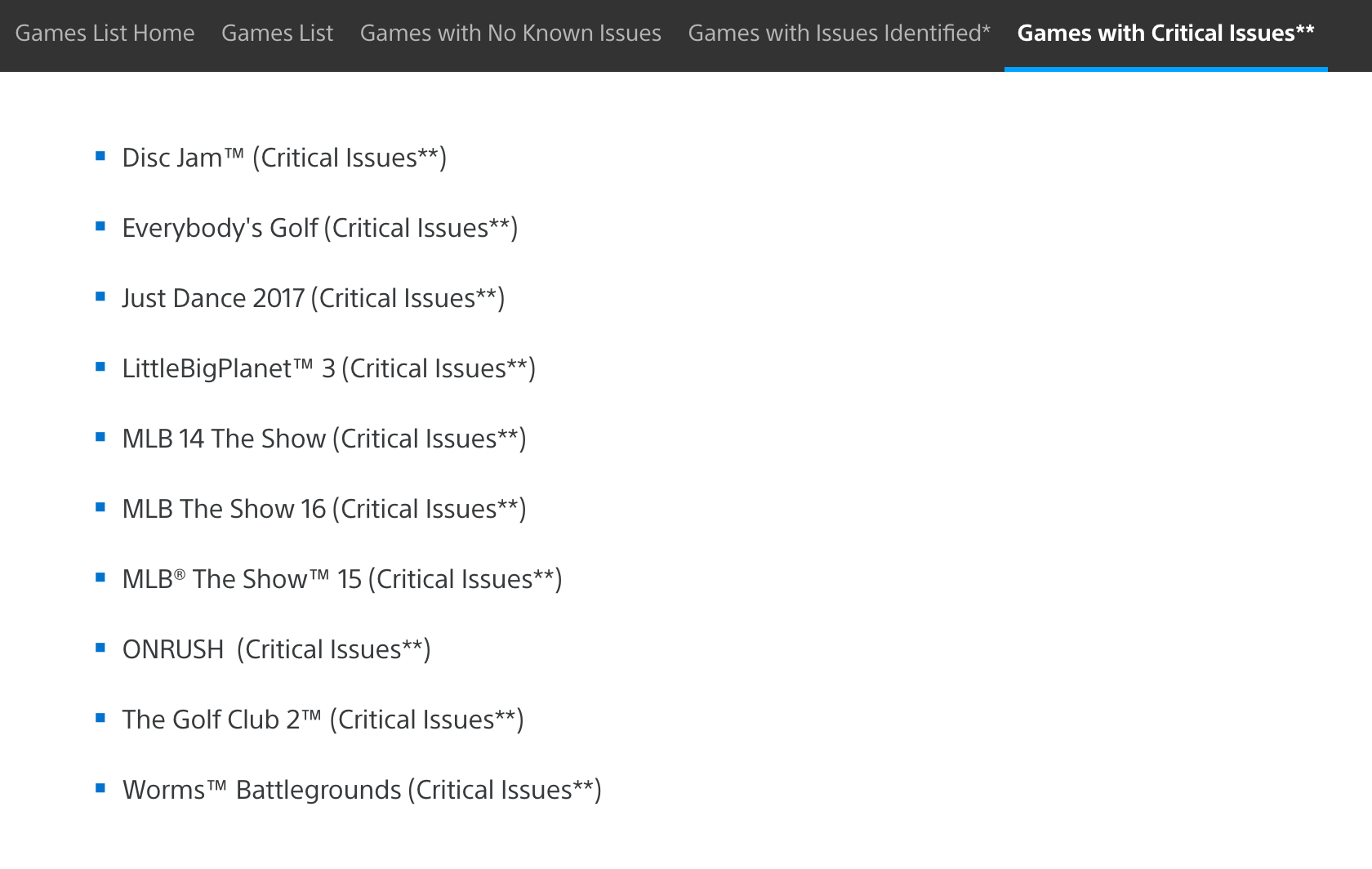 PlayStation)" loading="lazy" > These are the games Sony knows have “Critical Issues” when you log in after changing your PSN ID. (Screenshot: PlayStation)

It may be a tougher choice than you think: While it’s a relatively short list, it includes some good games that were temporarily given away through PlayStation Plus—I’m a big Disc Jam fan— o it may be tough to say goodbye.

If you decide to change your name and leave these games behind, I’d recommend deleting them from your console before changing your name in the interest of being absolutely, 100 per cent safe.

Nothing bad will happen if you have them on your console after changing your name, but I know I’d forget about the potential problem and open the game(s) on a whim if they were still around.