How To Eat Ramen In Japan

In Japan, eating ramen is a near goddamn religious experience.

You sit, you taste, and suddenly, you’re speaking to God himself.

I’ve loved ramen my whole life. I grew up on noodles of all slithery kinds: udon, soba, vermicelli. Ramen, however, has remained my favourite well into my adulthood — why eat anything else, when you can have a warm bowl of broth, meat, and noodles in front of you?

How Not To Be A Jerk In Japan

Before my recent visit to Japan, I did the same obsessive research I always do before things like doctor visits or job interviews. Unfortunately, this usually means I walk into every doctor visit and job interview convinced I have a disease that affects one per cent of the population.

When I first visited Tokyo nearly four years ago, yes, I fell in love with the transit system that makes the New York subway look even more like the bottom of a landfill.

I fell in love with the people, always kind and willing to humour an annoying American tourist with little knowledge of the language. And of course, I fell hard for the sudden availability of ramen all around me.

On a trip to Tokyo for Lifehacker, I had the chance to spend an afternoon with Frank Striegl of 5AM Ramen, the ramen expert of Japan.

Born and raised in Tokyo, he’d eaten thousands of bowls of ramen in his lifetime (!), and I wanted him to teach me the basic tenets of eating ramen in a country where the act of simply ordering it can feel like a delicate dance. Is slurping rude? How do I order from a ticketing machine? And what exactly is tonkotsu?

Over the course of a lunch, I learned all the ins and outs of ordering ramen in Japan — here are all those questions answered, so your first trip to a Tokyo ramen shop goes off without a hitch.

Samurai-Themed Menya Musashi's Flagship Ramen ???? Their noodles are king ???? For more on them, check out link in profile!

Its key elements include wheat flour in the form of noodles, salt, and kansui, or alkalinised water — this water separates ramen from both soba and udon.

You might be most familiar with miso, like in miso soup, and it isn’t a bad place to start as a beginner, Striegl said. It’s made with a fermented bean paste and has a brown, thick broth. During our lunch, I opted for shio, which is lighter and brinier than your usual ramen.

Shoyu tastes a little more like, you guessed it, soy sauce. And tonkotsu is the thickest and milkiest of them all — it’s made by boiling pork meat and bones over several hours.

Learning a language for a trip is different from learning it on a large scale; Duolingo is way too comprehensive, as is anything that tries to build up from fundamentals of grammar. You need a few phrases, like “please” and “thank you,” “What does this mean?” and “Where is the bathroom?” </p> <p>But most of the time, I needed just one word to feel less like an ugly tourist. I needed to say I’m sorry. Which is more complicated than it sounds.

Yes, there are a ton of other kinds, too. (By no means is this an exhaustive list.) Tsukemen, for instance, is a type of ramen in which the noodles are separated from the broth and you dip the noodles.

Some different parts of Japan have their own regional style of ramen, as well. But if you’re seated in a shop with no idea what to order, you can usually count on those four types being available.

If you need a little more insight while ordering, here’s a good tip: Thicker, colourful broth (i.e. tonkotsu) generally has more calories and if a broth is lighter, there’s generally more sodium (i.e. shio). Personally, I stick to tonkotsu, as I prefer a thick broth, though I loved the saltiness of shio.

The noodles vary in at least a hundred different ways, too, based on specifications like wavy or straight, round or square, thickness, and water absorption. Striegl mentioned that many ramen shops in Tokyo don’t make the noodles themselves. Instead, they outsource them to noodle companies who create them based on a particular shop’s desires.

You might find a shop that will allow you to customise your noodles, which we’ll address in a second. (Ichiran, a popular chain in Japan and creeping its way into New York does this — I prefer a thick noodle that’s firm, or al dente.) 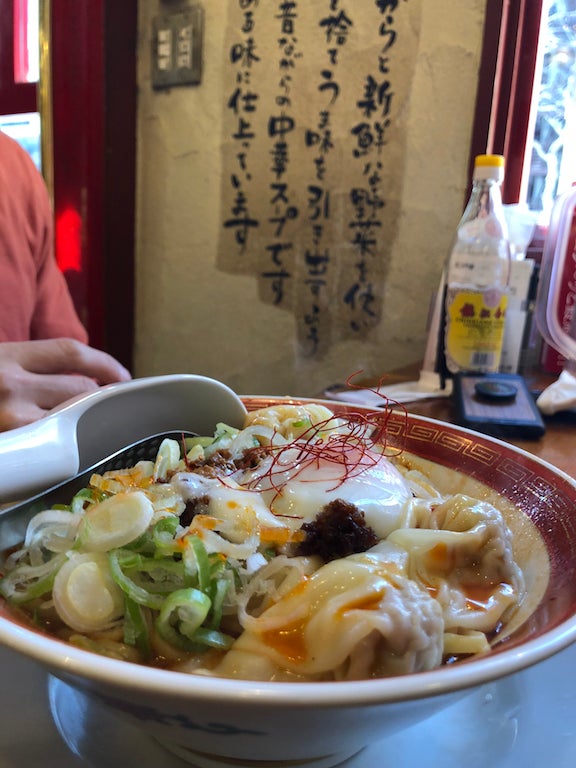 What about the toppings?

Toppings are pretty crucial to ramen. There are a lot of options, which include chashu (roasted or boiled pork), nori (seaweed), tamago (egg), kamaboko (steamed fish cake), menma (bamboo shoots), bean sprouts, and scallions, to name a few.

In Japan, some shops are also becoming more experimental with toppings, Striegl said. At our lunch, dumplings in ramen were a staple dish at the shop we visited, which is unique for a ramen shop.

Often times, your ramen will come with a number of these toppings without you needing to request it. You can choose to add any you like. Substitutions, however, can be a little more difficult. You could try to substitute an item, but it’s generally not the best etiquette.

(Our other guest couldn’t eat pork, and instead of navigating the conversation with the restaurant, I believe he had to order a new dish entirely.)

I’m going to Tokyo soon. How can I find a good ramen shop?

Excellent question. Of course, you can consult any Michelin-stared ramen guide and you won’t go wrong.

But if you’re on the streets of Tokyo and looking for something quick, Striegl laid out one useful ground rule: At some ramen shops, you’ll see a ton of photos advertising their dishes outside which is generally a red flag, he said. (Why advertise if it’s so good?) By no means does this mean you’ve found a bad ramen shop, it’s just a helpful indicator.

For other good recommendations, you can check out 5AM Ramen’s blog for reviews, as well. We ate at Koushu Ichiba, which is known for shio and shoyu ramen and was excellent from start to finish.

The Newst Michelin Ramen Shop on the block ???? What and how to Order ???? Check link in profile for details!

How do I order?

If you’re at a ramen shop without a ticketing machine, you’ll sit at a table like any other restaurant. Assuming you don’t speak Japanese, you can ask for an English menu and you’ll likely be provided with one.

Unlike typical restaurants, though, waitstaff at ramen shops is extremely limited (as in, one waiter and one chef, usually). In that case, you won’t be attended to in the way you’re accustomed to in American restaurants.

You’ll need to grab the attention of the waiter to order. A simple wave is fine — it’s not rude, Striegl reassured me.

You can point to any dish you like if the language barrier is a problem. And photos in menus are extremely helpful. Again, if you spot a darker broth, you’re likely headed in a thicker direction. If you see a clearer broth, it will be lighter and most likely a shio ramen.

What about those ticketing machines?

Yes, the experience of ticketing machines is probably very foreign to you, but it’s also extremely easy. Usually, you’ll spot a ramen ticketing machine (that looks a little like a vending machine with photos) at a storefront or just upon entering.

While it may vary from shop to shop, you’ll enter yen in the machine and the buttons with photos of ramen will light up.

Here’s where it gets tricky: There won’t be any English words on the machine, so you’re left to base your decision solely off photos. According to Striegl, if you’re suddenly experiencing a ramen existential crisis, your best bet is to select the ramen on the left-hand top corner. Why? It’s usually the most popular, he said, so you can’t really go wrong.

As Live Japan put it, when all else fails, asking for help isn’t such a bad either, either: “Osusume o oshiete kudasai” translates to “What would you recommend?”

You might also find side dishes like gyoza or even beer on the machine, too. Then, you give the ticket to the waiter or chef, and you’re all set.

Can I customise my noodles?

If you can, you’ll usually be handed a small slip after providing your ticket (or upon ordering from a waiter). Sometimes, they’ll have English options—other times, they’ll be in Japanese.

From experience, using Google Translate on my phone was pretty helpful in deciphering words. Otherwise, Ramen Tokyo has some helpful tips on getting through the language barrier and covers the basics:

Yes! You can. According to Striegl, it’s not bad etiquette. In fact, it’s often a compliment to the chef. Plus, it’s practical — ramen is probably very hot and it’ll cool it down.

He added that slurping has the ability to enhance the flavour of the ramen itself, too. (It’s true! We’ve written about it before. It helps aerate both the noodles and broth, allowing flavours to better develop.) 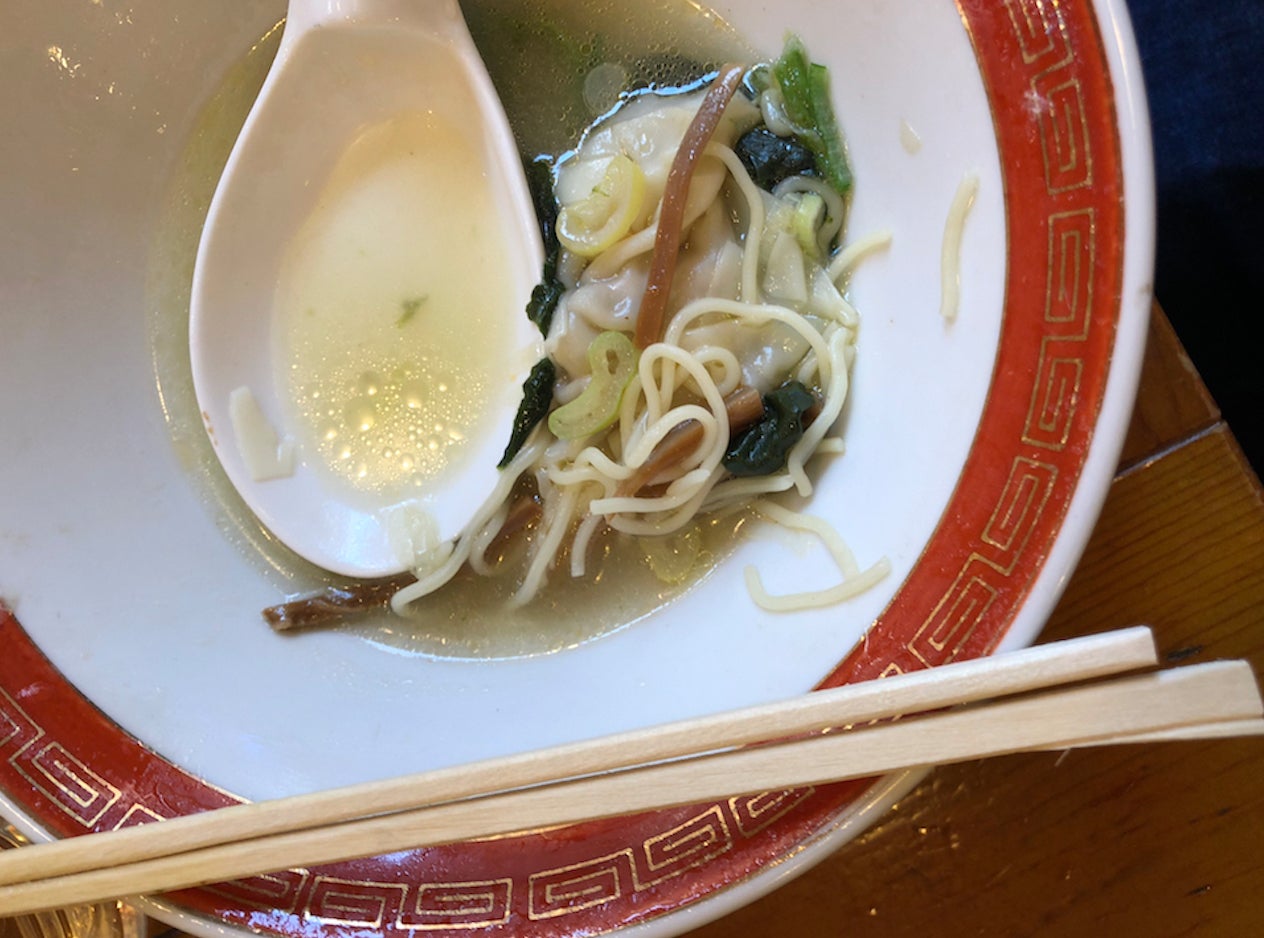 What else should I know so I’m not an asshat?

For one, if you’re in a crowded restaurant, it’s good etiquette to eat and leave shortly thereafter, he said. You don’t want to hold up the line.

When you’re done with your ramen, if you’re seated at a counter, you should place the bowl on that counter as a sign of politeness.

Two other interesting key tips: Don’t pass food to someone using your chopsticks and don’t ever leave your chopsticks sitting in a bowl vertically. (You’ll want to place them horizontally on a surface.)

Why? Believe it or not, both have pretty interesting context. According to Striegl, both acts are associated with Japanese funeral and cremation services. During a Japanese funeral service, for instance, bones of the deceased are passed between one another using chopsticks. For this reason, passing food, in the same way, is bad form. If your with a friend, just pass the bowl itself.

How do I say thank you?

Once your bowl is on the counter, your chopsticks are sitting horizontally on your bowl or plate, a quick thank you is always polite. Before leaving, you can yell a quick “Gochisou-sama” or thank you! They’ll appreciate the gesture — and if you really enjoyed it, coming back for another bowl probably the best gesture to a chef.