How The 2019 Budget Affects Your Wallet

This year’s federal budget takes on special importance for the government as it’s as much an election campaign statement as a look into the nation’s finances and what the government plans for the next 12 months. So, what will it mean for your wallet?

Tax Cuts – but only if you vote for us

Changes to to the tax system, proposed in the budget, could deliver up to $20 a week into your pay packet through a offset being paid to workers. Middle and low-income tax earners will get a tax offset of up to $1080 for single earners or up to $2160 for dual income families.Workers earning between $48,000 and $90,000 will receive a tax cut of $1080 when they lodge their tax returns after July 1 if the Coalition retain government.

Treasurer Josh Frydenberg said “The Government is more than doubling the low- and middle-income tax offset from 2018-19. Taxpayers earning up to $126,000 a year, including teachers, tradies and nurses, will receive a tax cut”. 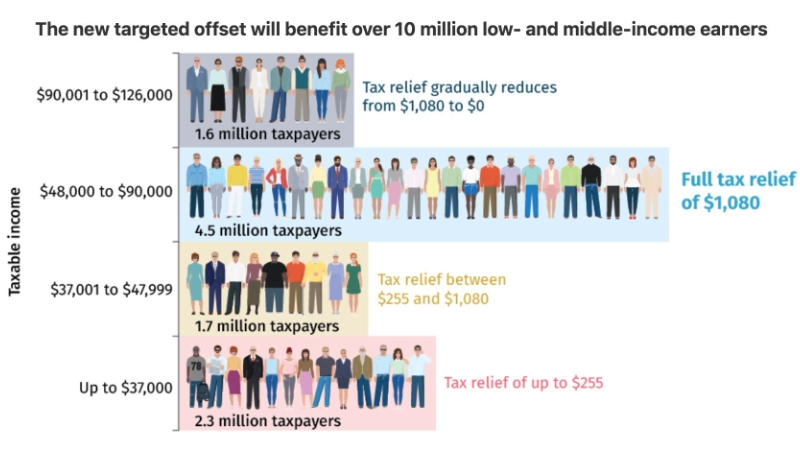 The issue of tax cuts is now well and truly an election issue with the the Treasurer saying the legislation for the cuts won’t be tabled until after the election. Labor has responded saying they’ll allow them to pass now, which will put the onus on the government to respond.

The full scope of the tax cuts is slated at $158B over the next ten years with the first $20B coming over the next four years with the remainder forecast to be delivered if the government wins the two elections following this year’s. But it’s also contingent on economic conditions supporting the cuts.

The economic outlook for wages looks pretty ugly. In real terms, pay packets haven’t grown over the last year or so and we can expect more of the same, which is why tax cuts are such a big deal.

The economic outlook for the next couple of years, suggests a small rise in the unemployment rate and little wages growth. That’s not just bad news for us directly. When people have less money that means they spend less and that means GST collections will be down. So state governments will see their slice of the GST pie shrink which means state services might see some pressure in the coming years.

One of the most annoying hassles for folks buying expensive gear, in the past, was the need to manage depreciation for items worth over $1000 in the old days. But a several years ago, the government extended the amount to a few thousand dollars for SMEs.

That scheme was extended last night which wasn’t a surprise but the good news is that the threshold has been raised further to $30,000 and is now available to more businesses as it applies to midsized businesses with an annual turnover of up to $50 million.

As well simplifying the accounting, it could encourage businesses to spend a little more as they get a larger tax benefit all in one go.

The scheme has been extended to 2020 so it’s not permanent.

Sam Allert, CEO of the Reckon Group, said “These will go a long way in providing a more stable prospect for around 3.4 million businesses. However, there is always more to be desired. Many small businesses who were hoping for the policy to be enshrined in permanency will be closely monitoring Labor’s campaign on this front in the lead up to the election”.

Allert notes that only about half of businesses have taken advantage of the tax offset scheme since it was set in place.

Energy expense relief for some

The government will ask the parliament to endorse a one-off payment of $75 for singles or $125 for double income families on income support to help with energy costs. That’s good news for many although, for some reason, the support excludes those on Newstart, who apparently don’t pay for electricity.

Energy costs are high but, interestingly, the Green Energy Markets’ Renewable Energy Index for March 2019 reported that renewables produced 128% more power than gas turbines over the summer, and 23% more power than brown coal although black coal remains the largest source of energy. That shift in where people are sourcing energy suggests many people are no longer waiting for the government to help them reduce their power bills.

In every budget, there are lots of smaller announcements that matter a great deal to us, outside the headline grabbing tax cuts and other handouts.

There’s little doubt that the government has looked to take maximum political advantage with her budget in an election year. Many of the measures announced will appeal with a combination of tax cuts and one-off payments to provide some financial relief as economic and wages growth are very slow. In the coming days, we’ll see the opposition’s response.