Ask LH: How Do I Leech My Neighbour’s Wifi Connection?

ask lhask lifehackerneighborroutersharingwifiwireless
To sign up for our daily newsletter covering the latest news, hacks and reviews, head HERE. For a running feed of all our stories, follow us on Twitter HERE. Or you can bookmark the Lifehacker Australia homepage to visit whenever you need a fix.

I might as well rename the Ask Lifehacker column “The Wifi Wizard,” given how many of you have written in with wireless networking questions over the past several months. That’s fine, though. Wireless networking is near and dear to my heart, as I have wonderful memories of the three years I spent testing routers for Wirecutter—lots and lots of routers, and enough throughput tests to last a lifetime.

This week, I’m taking a look at a question that’s the opposite of what I’m usually asked. I’ll let Lifehacker Tim explain:

I want to grab my neighbour’s wifi (for which I have permission and the password) and send it through my router. So far, my devices seem to be in some sort of conflict , requiring repeated resets. I am willing to start from scratch. Help!

This is a fun one. First off, let me say that I’m proud of you for working out a sharing arrangement with your neighbour. Internet plans are expensive, and there’s no need for two people to be shelling out for a pricey plan. That’s assuming neither of you are hogging up your available bandwidth with BitTorrent, Steam downloads, or a bunch of MMOs — the latter being the issue that prevented me from getting a decent connection when my roommates and I were sharing service with our upstairs landlord many years ago.

How Do I Block My Neighbour's Wifi?

Like Michael Myers from those Halloween movies, some things in life are (seemingly) inescapable. Taxes. Politics. Your neighbour’s wifi networks that are strong enough to give you an unusable signal in your home or apartment, no matter where you are.

I’m not sure why your devices are requiring repeated resets — either the devices themselves, or whatever wireless access point or router you’re using. You didn’t describe this in great detail, but it’s possible that your devices are simply struggling to connect to your neighbour’s wifi. There are probably quite a few walls between their access point and your stuff, not to mention a bit of distance. Even the best routers aren’t limitless, and it’s possible that you simply don’t have a good enough signal to maintain a consistent, speedy connection.

Typically, when I’m setting up a wireless network (or advising others on how to set up theirs), I recommend placing your primary router or access point — assuming you’re using just one — in the most central location in your home or apartment. That ensures that you’ll get as much coverage throughout the primary areas of your living space as possible, though you can always tweak the placement if you need better connectivity one one side of the house (your bedroom) than the other (your garage).

In your scenario, this makes the best place to put a router or an access point somewhere between your neighbour’s house (or apartment) and yours. What I’m getting at is that the size of your houses, and the space between them, means that even putting a router right next to the closest wall to your neighbour’s house (or vice versa) still means that you’ll both probably get less-than-stellar signals to work with.

While you can always try to get a wireless extender to “latch on” to your neighbour’s wireless signal and spit out a network of its own, you’ll be hit with a performance penalty for any device connecting to your extender. I’ve written about this previously, so here’s the short version: when an extender isn’t using a dedicated backchannel, then any device you connect to the extender using the same band that it’s using to connect to another router or access point is going to have its speed cut in half. The extender has to perform double-duty, after all, since this radio will be transmitting and receiving to/from you and whatever the extender is connected to.

Even then, your typical wireless extender isn’t … great. It can give you an oomph if you need a little extra coverage, but it’s not going to be able to blast a signal across a 1,500-square-foot home by itself. And resist the urge to start daisy-chaining extenders together for the same performance-limiting reasons I just mentioned.

Instead, if you’re going this “let’s share the same internet connection” route, the best (and most annoying) thing you can do would be to somehow connect your houses via an Ethernet cable. That’s probably too tall of an order, however. Instead, consider investing in something like a Netgear Orbi, which uses a dedicated 5GHz backchannel to connect both access points, who can spit out their own 5GHz and 2.4GHz networks without any performance slowdown. 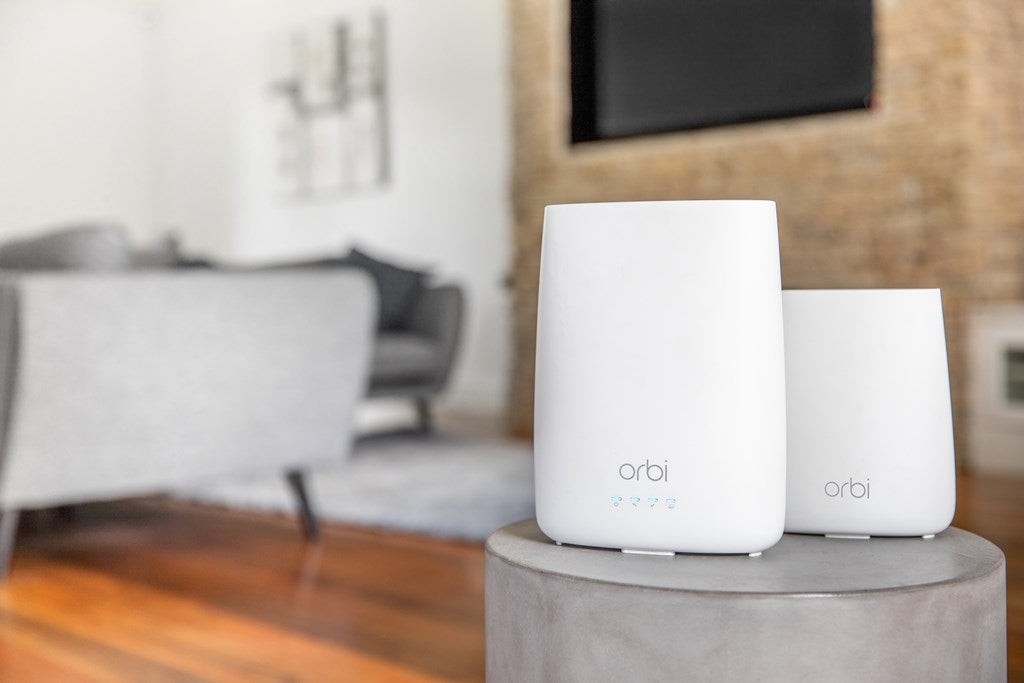 You’ll probably want to place each Orbi access point near the wall that’s closest to your neighbour’s house, and vice versa. That’s not a problem if you’re in a duplex or townhouses, but something that might be trickier if you have huge, sprawling yards separating your houses. There’s also an outdoor version of the Orbi which might help, depending on how you’re setting this up.

I suspect this might solve any wireless woes you’re experiencing. Otherwise, string that Ethernet cable (and let me know how you did it), and make sure you’re only using one router and a series of access points, rather than building a router-in-a-router kind of setup.

You could also get wild and convince your neighbour to set up an outdoor access point, or even a wireless point-to-point setup, which might give you extra signal you can use where you live. This is going to be a slight bit of a pain to set up, I’m sure, but well worth it if you can effectively cut your internet bill in half (assuming you’re shelling out for a part of what your neighbour’s paying, which would be a kind and generous thing to do.)