Android: Microsoft is currently testing a fun new feature that allows you to import data into Excel by taking a picture of it — preferably a data table and not, say, your cat. That won’t do anything.

On paper, the feature is great, especially if you work with numbers all day long. I don’t even want to think about the hours I spent in past jobs performing mindless data entry because colleagues needed some crazy analysis for material that wasn’t in a digital format. Insert long sigh here.

In practice, though, Microsoft’s tool still needs a little refinement. And that’s fine. It’s a beta feature right now, so it gets a pass. In fact, it’s so beta, that you can only try it out if you’re using the Android version of Microsoft’s Excel app. (iOS support is coming at some future point.) And even then, you’ll need to be an Office Insider to get access to the feature.

Here’s a quick guide for using Microsoft’s photos-to-spreadsheet tool, as well as a brief roundup of how we fared with it.

How to enable Excel’s new “Insert data from picture” mode

As mentioned, you’ll need to be running the latest version of Excel on Android. Once you’ve downloaded the app, you’ll also need to become an Office Insider to access the feature. That’s super-easy to do, though. Just click on this link and opt in.

Wait a few minutes, and then revisit Google Play to see if there’s a new app update for Excel (the beta features). If you don’t see it, you’ll have to check back later, but it shouldn’t take very long to get that update. (I had it almost immediately after enrolling in the testing program.) Once your app is updated, open it up and open up a blank spreadsheet. After that, look at the bottom of the screen to find a new icon: a camera on top of a spreadsheet. Tap that.

You’ll then need to give Microsoft permission to scan what you shoot, which means your photo will be going to a Microsoft server somewhere. (If you’re taking pictures of confidential financial documents, you might not want to do this—more in observance of your workplace’s policies than for fear of some Microsoft employee spying on what your company is up to.) 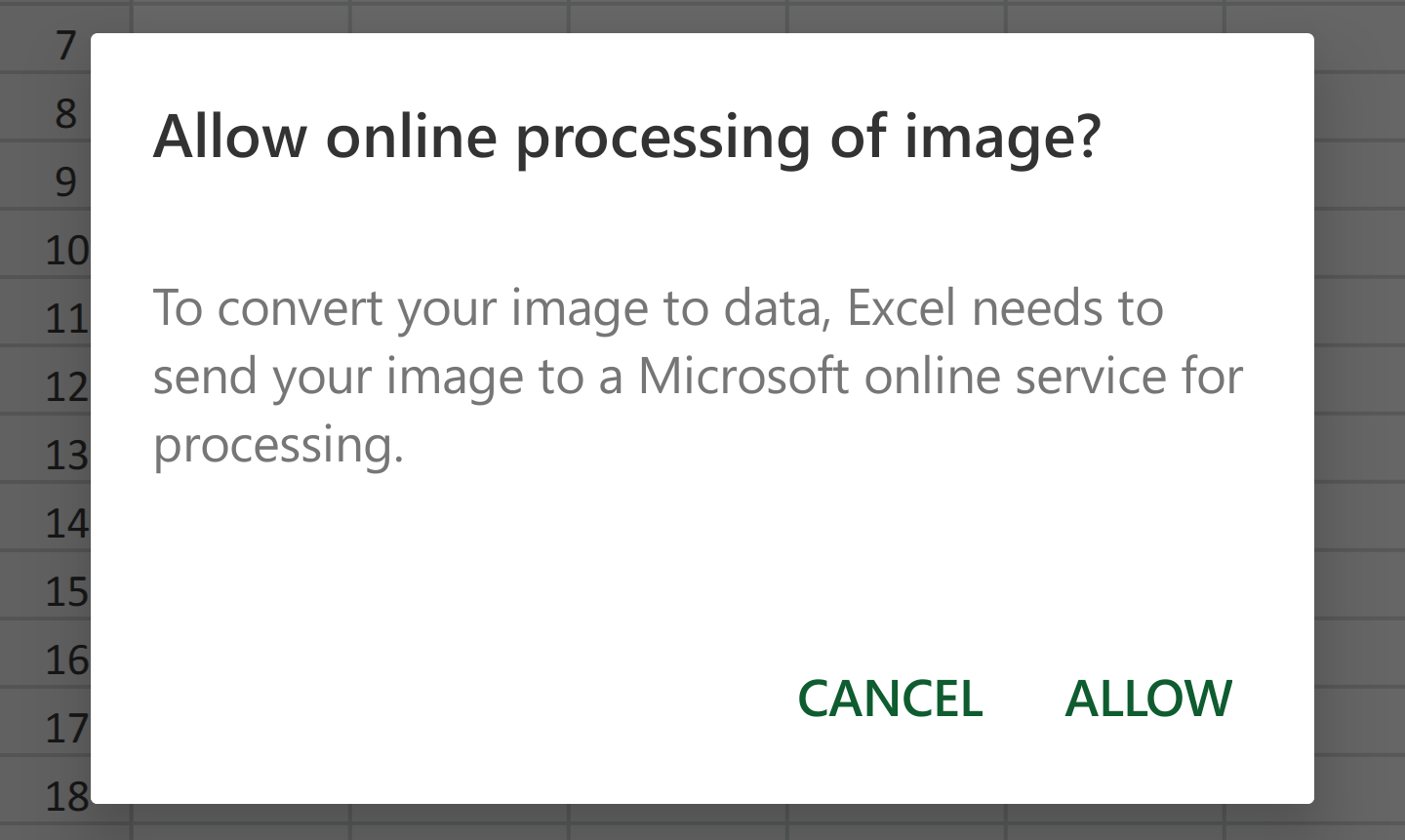 You’ll then see what your camera’s viewfinder sees, which shouldn’t be much of a surprise. New to the feed is a big red box, which is the analysis tool (sort of) at work. It’s scanning what it sees in order to figure out the borders of what it should ultimately attempt to import into Excel. In other words, if the red box isn’t around the data you want to capture, you’ll need to adjust the lighting of your room, and possibly the angle (or distance) of your camera. 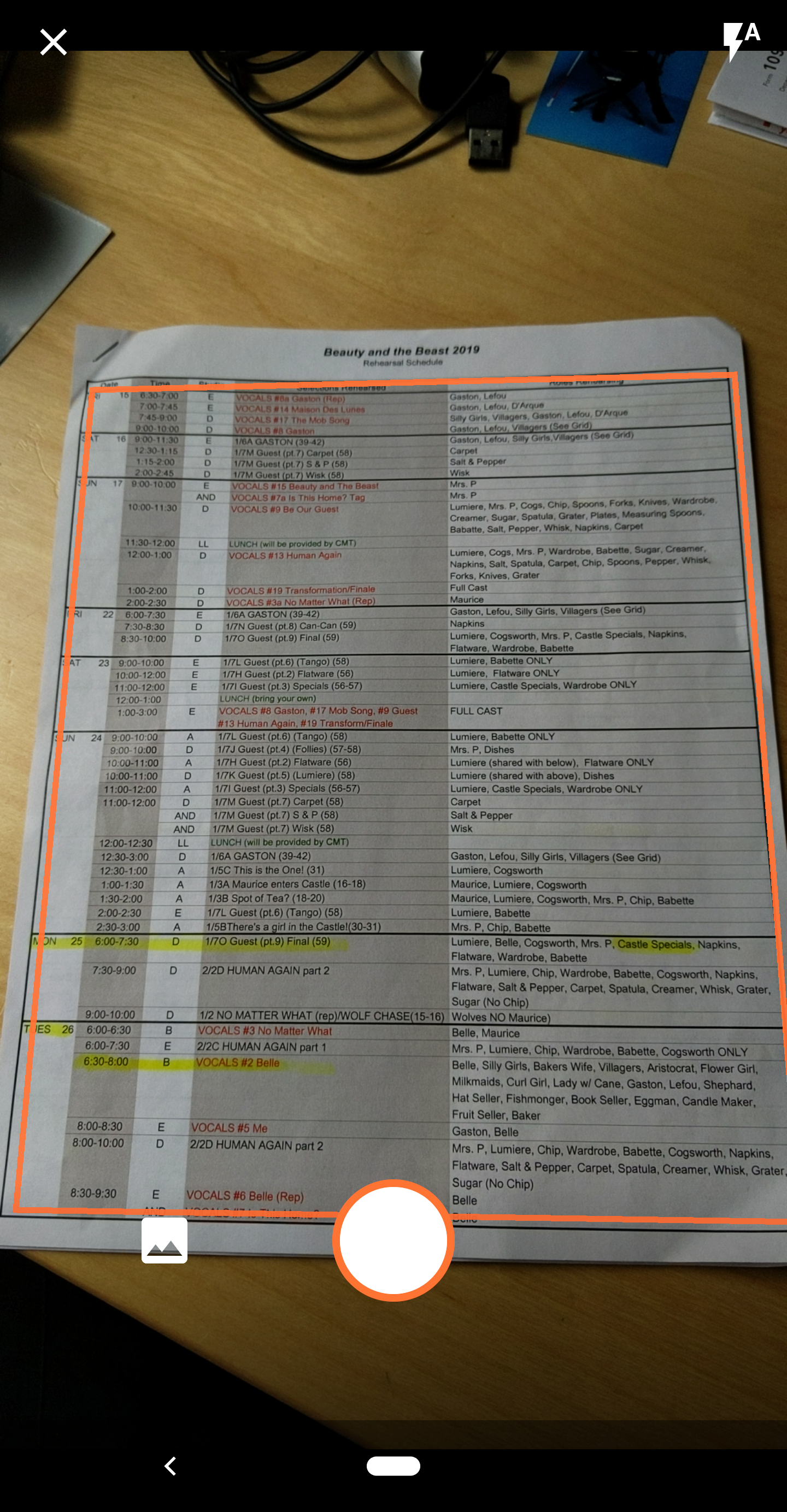 Once you take the picture, Excel will analyse what it found and alert you if there’s any data you might want to review if it’s unsure if it is correct. Spoiler: You’ll be seeing this a lot. 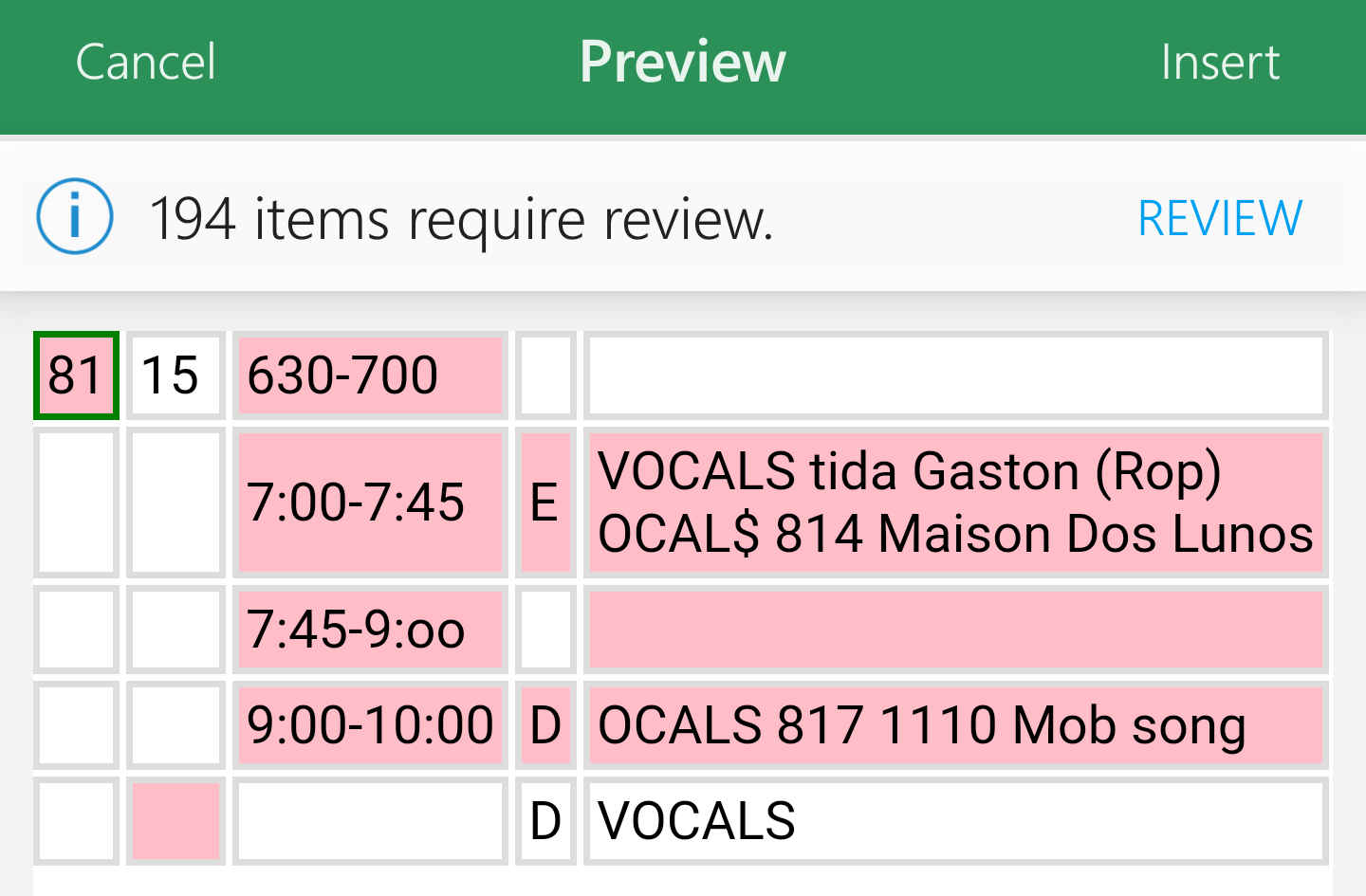 You can choose to make your edits via the Preview window, though I find it easier to just import everything into your spreadsheet and work from there. (You’ll probably want to make your biggest edits on a desktop computer or laptop, since that’ll likely go a lot faster than your smartphone or tablet.)

How good is Excel’s tool at importing text?

Well, it depends. Obviously, the more complicated the spreadsheet you’re photographing, the trickier the digital translation is going to be. Excel did an admirable job with this print version of a rehearsal schedule for a show I’m in, but it was still something I would probably spend just as much time fixing as I would retyping it from scratch. On the left: my super-complicated print rehearsal schedule.

On the right: Excel’s digital approximation of it, based on the photo. (Images enhanced for contrast.) (Screenshot: David Murphy)

Since I figured it was more the complexity of the spreadsheet that was giving me issues than anything else, I pulled out my trusty Tomb of Annihilation book from Dungeons & Dragons and gave that a whirl. The results were better, though still a little rough since the first chunk of data I was taking a picture of didn’t have defined borders around its content: 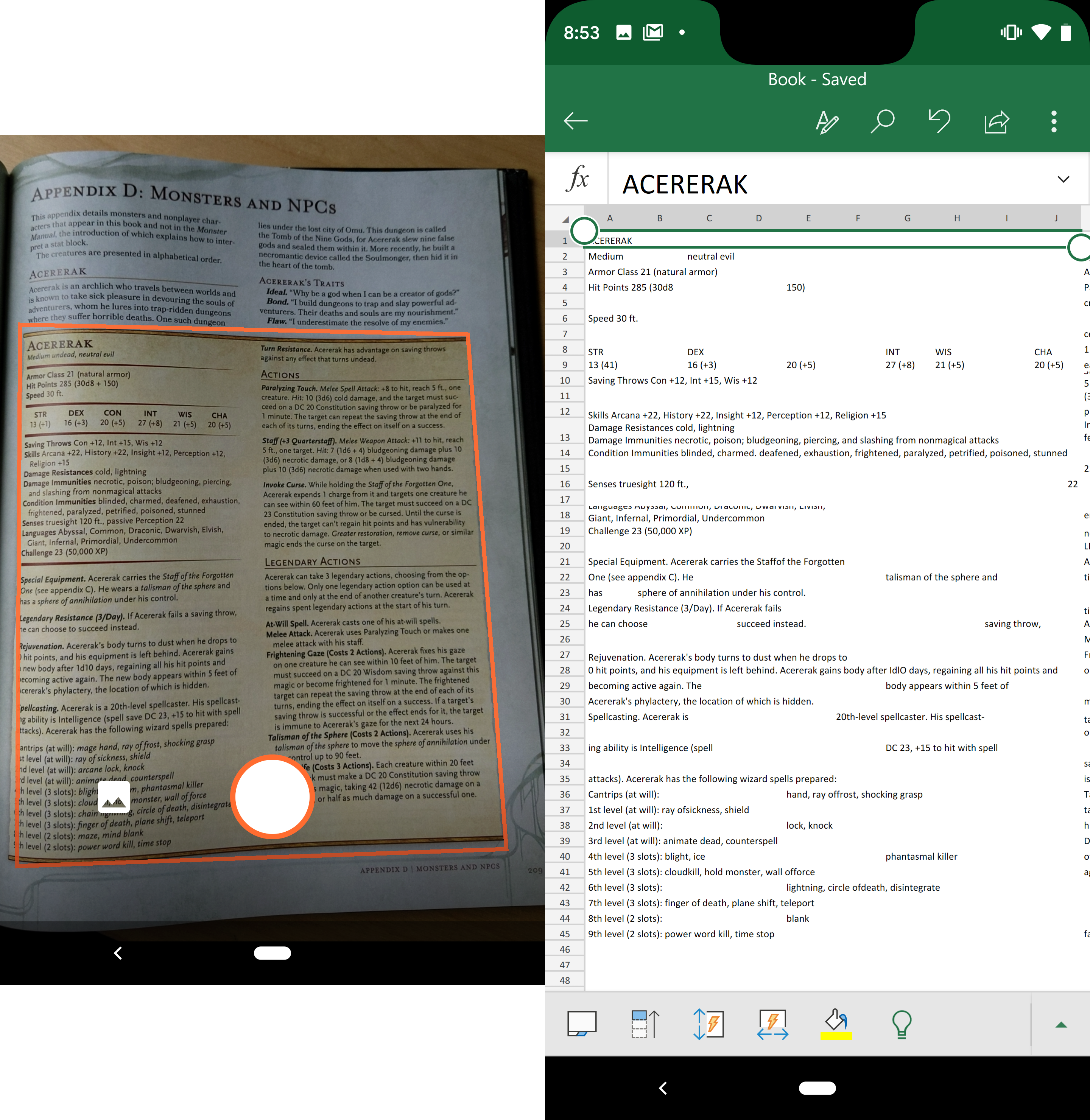 On the left: Acererak, my favourite D&D NPC, and his typical stats table.

On the right: Excel’s digital approximation of it, based on the photo. (Images enhanced for contrast.) (Screenshot: David Murphy)

The second Dungeons & Dragons table was a bit more… table-like… in its construction in the book, but the numbers didn’t quite line up, as you’ll see: 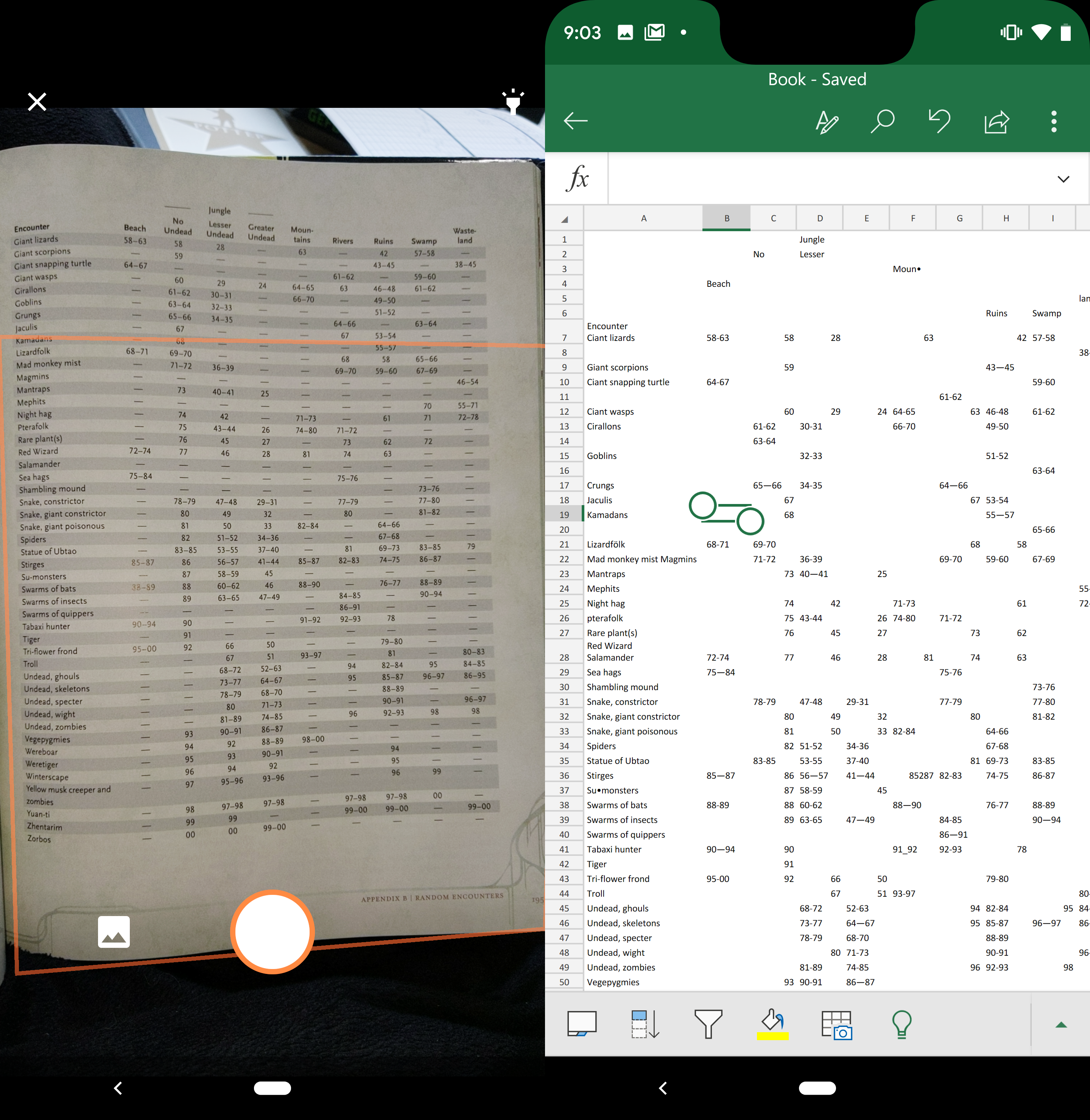 On the left: Monsters, monsters, and more monsters.

On the right: Excel’s digital approximation of the table, based on the photo. (Images enhanced for contrast.) (Screenshot: David Murphy)

That said, Excel did a pretty decent job importing the scanned text, even if it was in the wrong spot. While that’s not so helpful when a table is full of numbers that are kind of where they should be, it’s great if you’re importing a bunch of text. Copying and pasting (or moving) that elsewhere is a lot easier than retyping it all, that’s for sure.

Finally, I gave Excel the simplest possible table I could think of to import: No colour, printed text with a standard font, and a normal layout: On the left: A lot of people die in Yosemite

On the right: Excel’s digital approximation of the table, based on the photo. (Images enhanced for contrast.) (Screenshot: David Murphy)

Not bad? The digital version still needs some cleanup, and the tabbing is all gone (as I expected), but the raw data is in pretty good shape. I’d probably spend a fraction of the time fixing this as I would retyping the whole thing from scratch, which makes Excel’s little feature worth exploring if you have a fairly normal-looking table you’re trying to turn digital.

Anything more than that, and the tool works better as text-importer than a table-recreation tool, I’d say.