The stars are aligning for Nintendo to release an all new version of its hugely popular Switch gaming console. It’s been two years since the initial launch which makes the timing about right for an update that will help convince slower adopters to make the switch (ahem) without pissing off existing owners. So, what will a new Nintendo Switch bring us? Let’s take a look into the crystal ball.

The Nintendo Switch Mini is an almost certainty

With Nintendo DS family of devices now fading away, Nintendo can be confident that a smaller Nintendo Switch won’t cannibalise its existing markets.

We’ve already speculated on what a Nintendo Switch Mini will look like noting it will probably not have the removable Joy-Con controllers but still, somehow, support existing docks (although there likely won’t be one in the box.)

The screen will be smaller, in keeping with the “mini” moniker, but will likely have a bezel-free display and enough processing grunt and overclocking capability to allow the Switch to upscale images when played on a larger display. 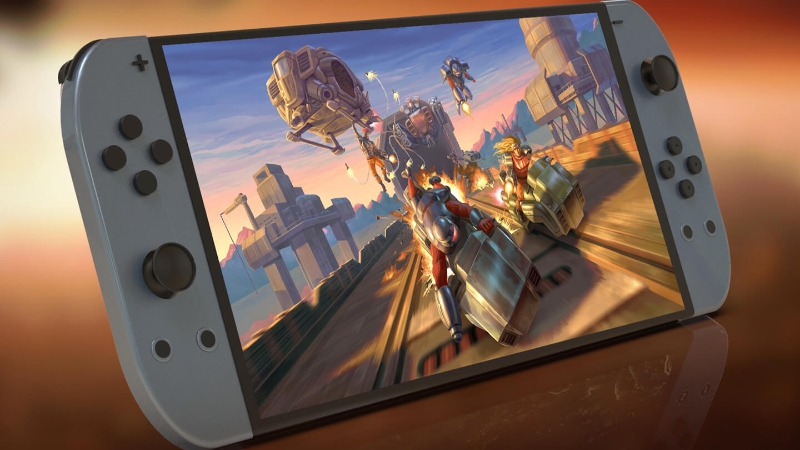 Image: A render of what the Nintendo Switch Mini might look like created by Let’s Go Digital

The updated Nintendo Switch will have better connectivity

USB-C is now the standard for connectivity other than for a few hold-outs – yes Apple, I’m looking at you in particular.

Nintendo did include USB-C on the Switch but it can’t be used to route audio for some inexplicable reason. Given most smartphones and tablets can use USB-C to route audio and video, and laptops can use one connector to hook up a docking station with stacks of ports, this decision by Nintendo is perplexing.

The other areas where Nintendo messed up is with Bluetooth. Although Bluetooth can be used to connect the Joy-Con controllers, it cannot be used for audio as it lacks support for the appropriate bluetooth profiles.

Nintendo needs to do a lot better on those fronts so owners can connect their other accessories easily.

Although the display resolution is unlikely to get a major change, the materials used to make it could stand some attention. The display can be easily scuffed and marked, even through everyday actions such as docking and undocking the Switch.

Some more hardy materials there will be appreciated.

Battery tech continues to evolve. If you think of today’s smartphones, they haver faster processors each year, better displays and more cameras requiring more processing power to operate. All of that sucks juice from your battery. Yet, battery life improves each year too. Some of that improvement comes from more efficient resource utilisation but we’re also getting better at packing more mAh into limited spaces.

The next generation Nintendo Switch will need to easily exceed four hours of playing time to meet the needs of avid gamers. The current three-hour life when playing high-end games doesn’t cut it any more.

There’s nothing official yet but if Nintendo wanted to make a big splash, E3 in Los Angeles in June would seem like a good place to do that.