Which Wifi Channels Should I Use For My Wireless Network?

ask lifehackerchannelnetworkingrouterwifiwireless
To sign up for our daily newsletter covering the latest news, hacks and reviews, head HERE. For a running feed of all our stories, follow us on Twitter HERE. Or you can bookmark the Lifehacker Australia homepage to visit whenever you need a fix.

Clearly, a bunch of Lifehacker readers have issues getting wireless networking to work — whether you’re trying to connect from a long distance away, you’re getting crappy speeds on your devices, or you’re frustrated because there are 300 different wireless networks irradiating your apartment.

It’s a confusing topic if you want the best range and fastest speeds for your devices, and I wager that most people simply do whatever their routers tell them to do during the setup process, connect to whatever network gets created, and call it a day (for better or worse).

Lifehacker reader Lee recently wrote to us about a specific aspect of wireless networking giving him trouble. Here’s the conundrum:

“As a follow up article you may want to address the WiFi channels. Many owners never change their WAP from the default channel and are using the same one as their neighbours.

For your issue about not getting 5GHz to other parts of the house due to range, you can add a second WAP wired to the first. Just turn off DHCP and DNS on the second one so your primary WAP does it for both.”

How To Get Faster Hotel Room Wi-Fi

You check into your hotel after a hard day of travelling. All you want to do is kick off your shoes, set the temperature to whatever hot or cold extreme you wouldn't be able to get away with at home, and say hello to your Netflix queue before some much-earned rest. And then you realise the terrible truth: Your Wi-Fi connection is horrible or, worse, non-existent.

First off, yes! You are correct. When given the opportunity, you should try to avoid competing wireless networks at all costs.

Still with me? Good. This whole “channels” bit is important, because you want your wireless networks to live on channels that have as few competing networks as possible. The more interference you have to deal with from competing networks and devices, the slower your performance might be. As one Reddit user described:

“I recently moved into a condo and have a 100mbps plan, but my wifi was only getting 4Mbps using Speedtest.

Using Wifi Analyser showed I was on Channel 6 along with about 6 others.

Channel 11 only one had one other, so I changed my wifi signal to use channel 11. Immediately after I ran Speedtest and got 87Mbps.”

To figure out your wireless situation, all you need to do is grab a free wireless scanning app. I’ve previously shared my love for Wifi Analyser (Windows) and Wifi Explorer (Mac), though Mac users should also check out NetSpot if you don’t want to pay $30.99. 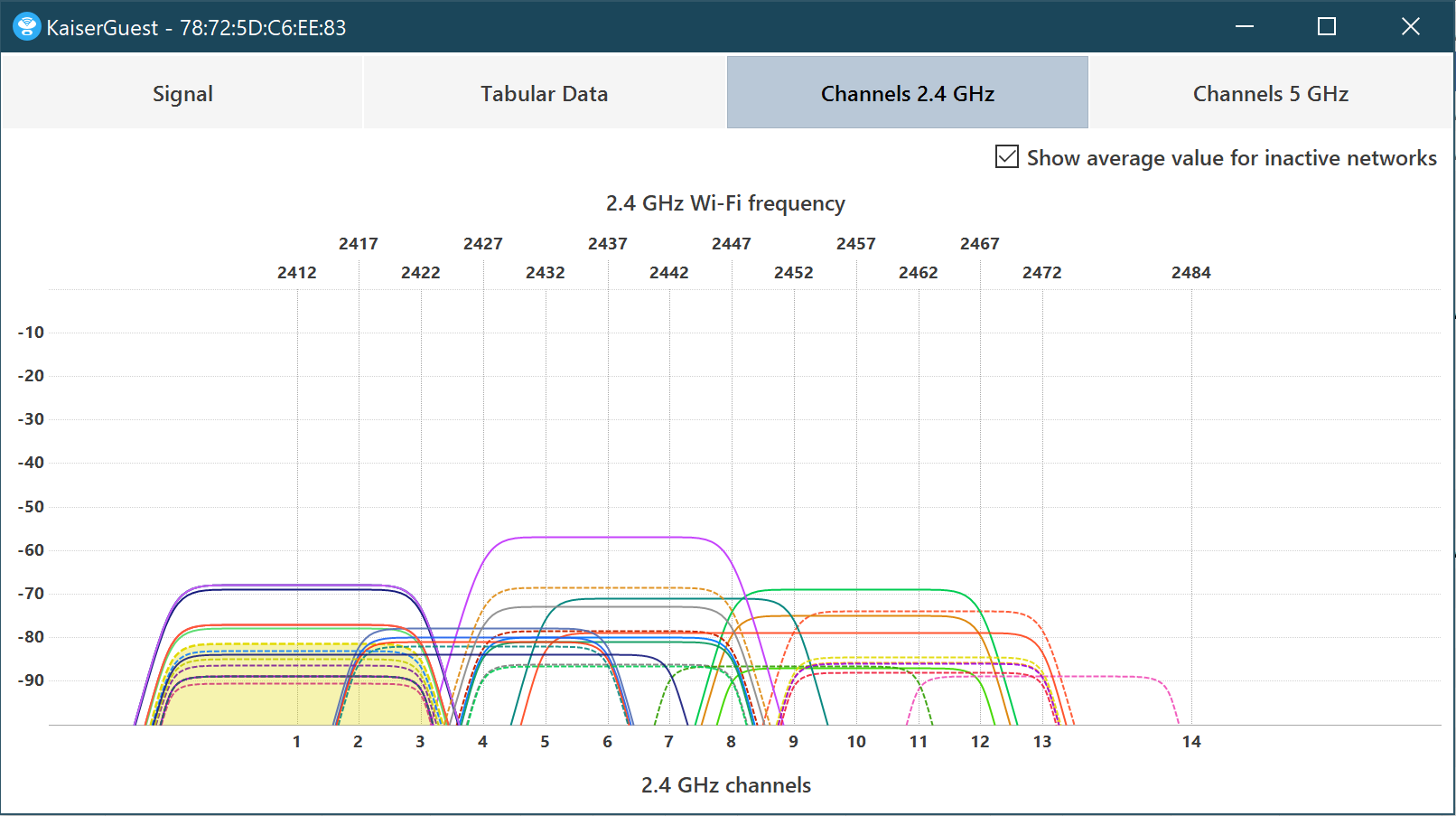 In this case, I’m living in wireless Hell, so there’s not that much I can do to better my situation, short of installing more access points (or a mesh network) around the house to blast a stronger signal everywhere.

If your graph looks less chaotic, and you’re noticing channels where your neighbours aren’t blasting a wifi network, or the signal strength from competing networks is low on a particular channel, then that’s where your wireless network should go. Ideally, you’ll want to run your 2.4GHz wifi network on channels 1, 6, or 11.

You should be able to set your wireless network to a new channel within your router’s settings. (And don’t forget to do this same analysis for your 5GHz wireless networks as well.)

As part of your wifi scanning, you might also notice that your network is overlapping a larger number of channels than other wifi networks. To put it in technical terms, your router might be using channel bonding, which combines multiple adjacent channels together to give you even faster speeds.

That’s great if there aren’t any other networks interfering with your 40MHz (or greater) wireless network. However, if other nearby networks are using the same wifi channels, they could affect your performance as well. Or, worse, your wireless network could be affecting everyone else, when it normally wouldn’t if you “stayed in your lane” with a wireless network that overlaps fewer channels.

This is getting pretty detailed, but I wanted to call out channel width — and let you know that it’s a setting you might be able to manually force — because it can impact your wireless network’s performance. It’s a trade-off, though; drop your wifi network’s channel width to a lower value, and you might encounter less interference at the cost of overall performance. It might also be the trick that gives you better wireless performance, depending on the setup of competing networks around you.

These are all things you’ll want to test out, of course, but now you know you can (and should) analyse your surrounding location to figure out the best way to configure your wireless network. It’s a little confusing, I know, but hopefully this demystifies the process a bit.

If you’re still having issues with your personal setup, or you can’t quite figure this all out, leave a note in the comments and I’ll be happy to help you troubleshoot.