What Is A ‘Bomb Cyclone’?

storms
Facebook may have decided that you shouldn’t see the news, but we think you deserve to be in the know with Lifehacker Australia’s content. To sign up for our daily newsletter covering the latest news, hacks and reviews, head HERE. For a running feed of all our stories, follow us on Twitter HERE. Or you can bookmark the Lifehacker Australia homepage to visit whenever you need a fix.

According to the National Ocean Service, a bombogenesis “describes a midlatitude cyclone that rapidly intensifies.”

Here’s the full definition from the ocean service.

[Bombogenesis] occurs when a midlatitude cyclone rapidly intensifies, dropping at least 24 millibars over 24 hours. A millibar measures atmospheric pressure. This can happen when a cold air mass collides with a warm air mass, such as air over warm ocean waters. The formation of this rapidly strengthening weather system is a process called bombogenesis, which creates what is known as a bomb cyclone.

The lower the pressure gets, the stronger the storm, or “bomb cyclone”, will be. Stronger storms can mean high winds and large amounts of snow. 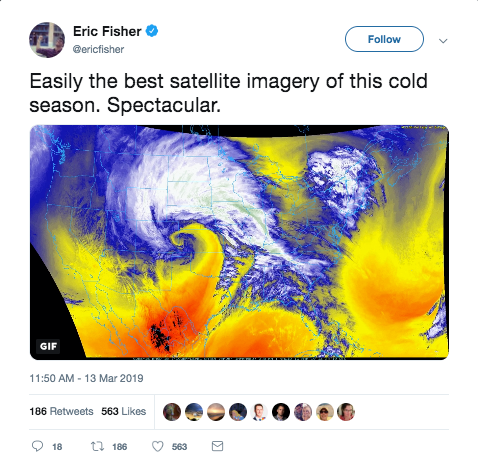 In the case of Denver, when an Arctic air mass from the north hit the warm, humid air mass that was over the area at the time, the pressure dropped quickly and the bomb cyclone was formed.

This essentially means that it was a strong storm that appeared quickly, rather than a slow storm that everyone was able to track on its approach.

While we don’t hear about them too often, bomb cyclones typically occur at least once a year, according to the National Weather Service. With climate change, they’re something we might start to see a lot more of as cold air continues to migrate a bit farther south than it has in the past.