At its latest keynote today, Apple announced four new services to help it push deeper into the wide worlds of news, entertainment, and… banking? As predicted by analysts and reporters, Apple announced a paid magazine subscription platform and a Netflix-like streaming service. It also announced an Xbox Game Pass-style subscription for games and—this one’s a real doozy—its own credit card.

While each of these products represents a major grab for money and mindshare within their respective industries, Apple framed each of its new services as the premium, paid versions of services Apple already provides. So, moving to a more expensive version of that which you’re already familiar with should be a snap, right? Apple hopes so, at least.

First up, Apple announced a premium subscription for Apple News with an emphasis on magazines and prestige publications. The new “Apple News+” service gives you access to over 300 publications for $US9.99 per month (Australian pricing has not been announced.) The majority of them are magazines, including The New Yorker, Wired, Sports Illustrated, The Atlantic, Time, and others. The subscription also provides access to some premium digital entities, including The Skimm, Vulture, The Cut, and TechCrunch, as well as two national newspapers, The Wall Street Journal and The Los Angeles Times. Or, at least, some version of The Wall Street Journal.

WSJ internal memo says Apple News+ users will only get a "curated collection of general interest news." To access biz reporting, you'll still have to subscribe to the WSJ. Memo says "our collaboration with Apple will also extend to areas like video, voice, market data and AI."

Unlike Texture, an independent app that provided a similar service (which Apple acquired last year), the publishers will create special editions for Apple News, featuring scalable layouts of individual articles for mobile and tablets. The navigation and formatting of these print publications will be geared for online readers, who are a lot more used to scanning for content article by article, rather than issue by issue.

Apple News+ launches today in the U.S. and Canada, and it will come to Europe this fall. There’s a one-month free trial if you sign up. As with many of its subscriptions, Apple is also allowing family sharing for Apple News+, which allows up to six users in a family to share a single subscription.

In what has to be the most bonkers news of the day, Apple announced it’s teaming up with Goldman Sachs and Mastercard to create its own digitally native credit card. Designed to sync up with Apple Wallet and Apple Pay, the Apple Card’s primary selling point is transparency and easy navigation: The menus you use to pay bills and track spending are full of flashy UI and interesting infographics. Apple said the card sync with use Apple Maps and transaction data to make a more clear and concise transaction history. It also said it will use analytics to chart trends in your spending. And if you’re having issues, you can get support for your Apple Card via Messages.

At its core, the Apple Card is a basically cash back card, but with a couple of novel ideas and an Apple rewards twist. Users get two per cent cash back on all purchases, paid out on a daily basis, and three per cent on purchases at Apple Stores or spent on Apple services. Apple said it will offer better interest or incentives to pay down debt on the card more frequently. Lastly, there will be no late fees, over-the-limit fees, or international fees.

While the Apple Card is primarily made to work in tandem with your phone, there will also be a physical card. It’s very sleek, as you would expect from Apple. It also has no credit card number on it: just your name and a chip. Apple (obviously) wants you to use Apple Pay whenever possible—you only get one per cent cash back when you use the physical card versus Apple Pay.

Is it a good credit card? That remains to be seen. The Apple Card will be available starting this summer. In the meantime, Lifehacker finance writer Alicia has some thoughts on the matter.

Hot on the heels of Google’s new streaming video game platform Stadia comes Apple’s relatively conservative approach to gaming. Apple Arcade is a video game subscription service for iOS, Apple TV, and Mac that will give you access to over 100 games for a single fee, similar to Microsoft’s Xbox Game Pass.

The games on Apple Arcade are all what you might call “premium” mobile games. That is to say, they do not offer microtransactions or feature ads; you’d cough up a few bucks to download them from the App Store and play them forever. With the mobile market moving to subscriptions above all else, Apple’s service looks to bring more innovative and, dare I say, interesting games back to iOS.

As with games you’d buy on the App Store, Apple’s subscription allows you download games and play them on- or offline. (Apple emphasised this almost certainly to dig at Google, whose service was criticised for requiring a fast internet connection.)

All of the games on Apple Arcade are “mobile platform exclusives,” meaning they won’t be available on Android (at least some of them, I believe, are coming to PC and consoles). They also won’t be available through any other gaming subscription service.

Apple Arcade is coming to over 150 countries this fall. However, there’s no word on how much the service would cost just yet.

Last, but not least, Apple officially announced its plans to take on Netflix with its own premium subscription offering, Apple TV+. In preparation for the fall launch of the service, the Apple TV app is getting an overhaul and a huge expansion: You’ll find it on MacOS this fall, as well as a wider array of devices such as smart TVs from Samsung, LG, Vizio, and Sony. It’s even coming to Roku and Amazon Fire TV streaming boxes, because the bigger the potential audience, the more Apple can rake in from that sweet, monthly fee…. whatever it is. (Apple didn’t announce this key point.) 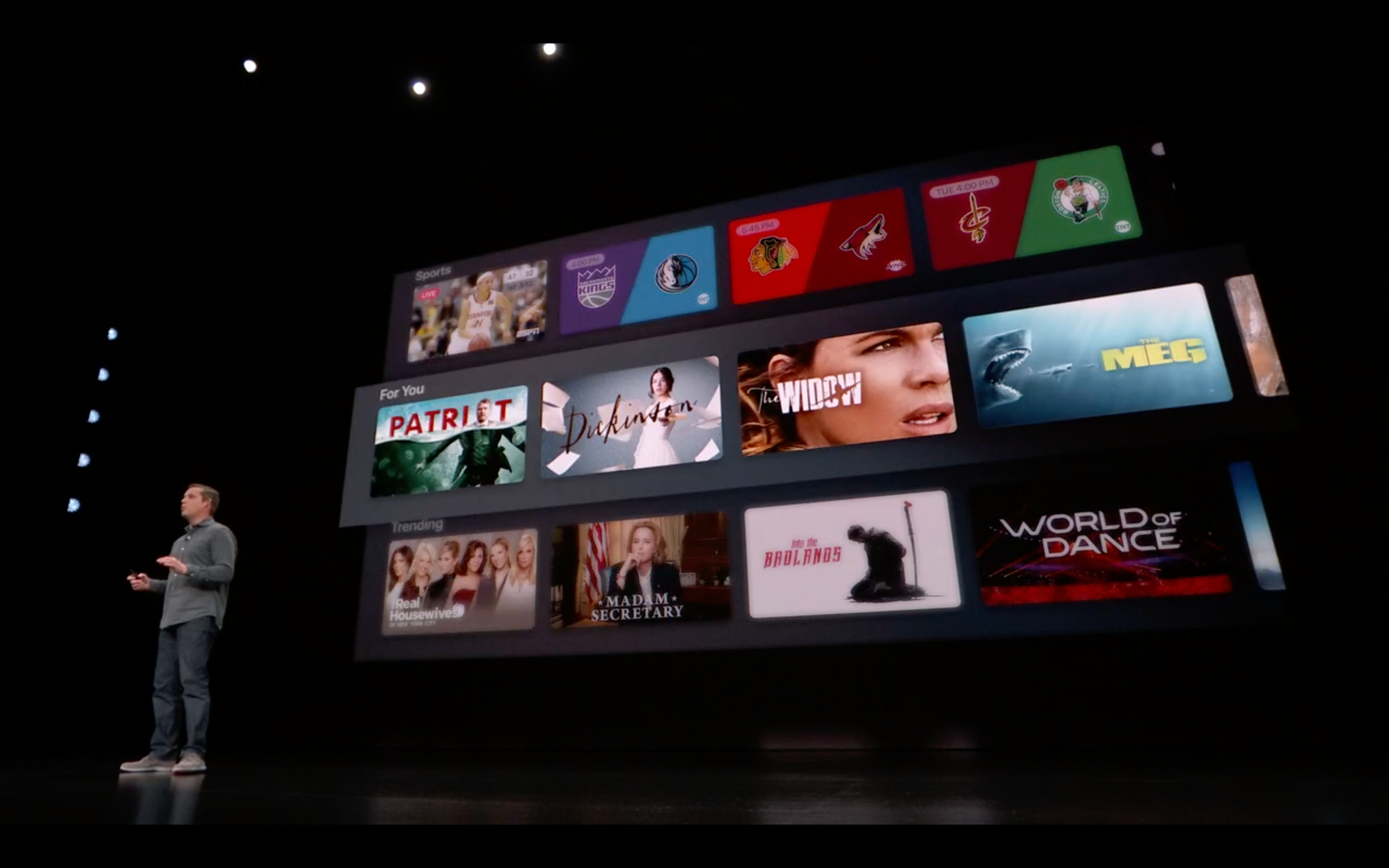 This is what the new Apple TV app looks like… Kinda familiar, no? (Screenshot: Mike Epstein)

Apple spent most of the time devoted to Apple TV+ talking about some of the original programming coming to the platform. The company trotted out some big names, including a sci-fi anthology series from Steven Spielberg, a coming of age tale about a young woman looking to make it as a singer in New York from J.J. Abrams and Sara Bareilles, a kids show from the makers of Sesame Street, and three projects from Oprah: two documentaries and a new Oprah’s Book Club show. Gizmodo has a full list of the shows Apple announced in its Apple TV+ explainer.