SMBs Have A Long Way To Go To Reach Digital Maturity

During Cisco Live last week, the company’s main event for the Asia Pacific region, the first Cisco APAC Digital Maturity Index was launched, giving us a picture of where Australian SMBs sit when it comes to their preparedness for digital disruption. And while on one hand we aren’t doing too badly compared to others, there’s a lot of room for improvement. 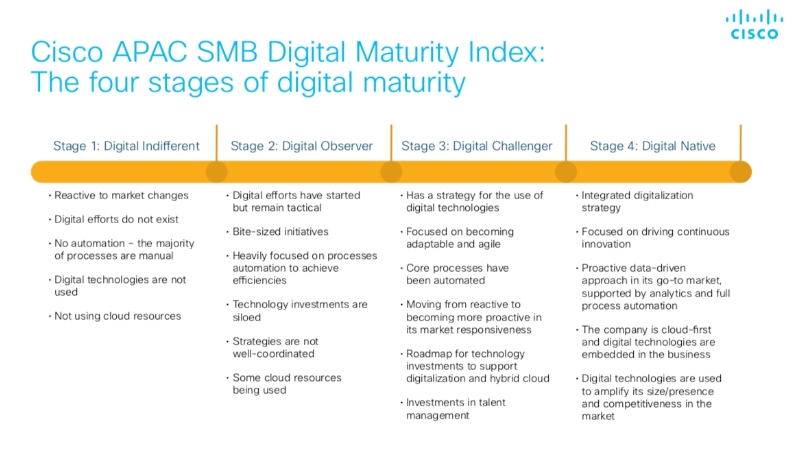 When a company achieves the “Digital Native” level, they can appear very large and operate globally, even though they might be quite small said Nykaj Nair, Cisco’s director for the SMB sector in the ANZ region.

Just over 60% of businesses surveyed have embraced some degree of digitisation with survival noted by 43% of companies as the primary reason they are looking at new technologies. Interestingly, 22% are taking a “wait and see” approach according to the data gathered by Cisco.

When it comes to investments, the main areas are cloud and security. Cisco says these two are strongly linked as the cloud doesn’t mean security problems go away. Rather, the risks change which means security investment often goes hand in hand with a shift to cloud services.

It’s worth noting that many countries offer government support for SMBs looking to leverage new technology. And while half of the study’s 1400 respondents took advantage of grants and other tools offered by governments, about 37% knew there was support available but didn’t use it and 12% were unaware it even existed.

Cisco’s data looked at 14 countries in our region. The highest ranked country was Singapore, with Japan, New Zealand and Australia rounding out the top four in that order. 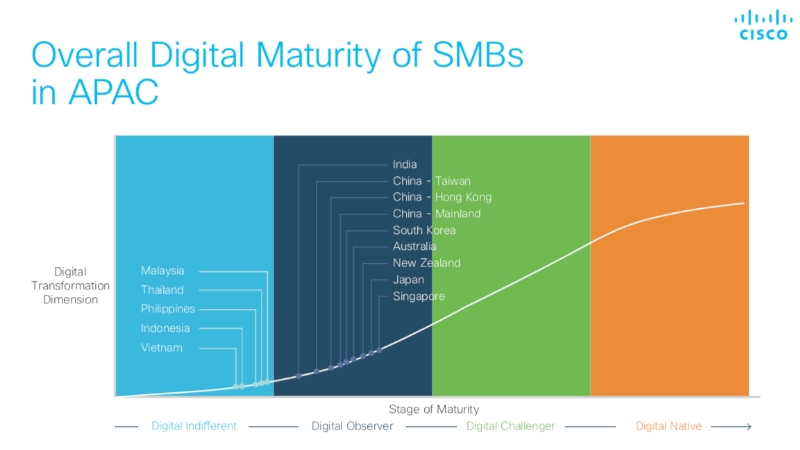 No one ranked beyond the “Digital Observer” maturity level according to Cisco’s data.

This is the first time it has conducted this report and plans to repeat it over the coming years in order to build a longitudinal view of what’s happening with digitisation in the SMB sector.