I’m Author Daniel Pink, And This Is How I Parent

kidsmotivationoffspringparenting
Facebook may have decided that you shouldn’t see the news, but we think you deserve to be in the know with Lifehacker Australia’s content. To sign up for our daily newsletter covering the latest news, hacks and reviews, head HERE. For a running feed of all our stories, follow us on Twitter HERE. Or you can bookmark the Lifehacker Australia homepage to visit whenever you need a fix.

Daniel Pink is the bestselling author of several game-changing books about behaviour, motivation and organisations, including his latest, When: The Scientific Secrets of Perfect Timing. So he must have this parenting thing in the bag, right? “I am more than willing to offer up research, tips and hacks to my family — and they are more than happy to dismiss whatever comes out of my mouth,” he jokes.

But we are here to listen. Here, Pink shares a glimpse of his life and what he’s learned about raising children.

On his morning routine:

I usually wake up at 7:15 or so. I’ll take a shower and maybe get downstairs at 7:30, in which case I can have a small cup of coffee and have my 16-year-old grunt at me periodically in the 15 minutes before he leaves at 7:45. Generally, the morning conversation at the table revolves 80 per cent around sports, 10 per cent around Donald Trump and 10 per cent around scheduling. After my son goes to school, I’ll read the newspaper for a little bit, and then on writing days, I’ll clamber into my office, which is the garage behind my house. And then I’ll give myself a word count that I must hit before I’m allowed to do anything — before I’m allowed to open my email, read my texts or look at Twitter.

On the role of iCal in his home:

If you were to look at our iCal, you would see something that looks almost like an hallucinogenic drug in its rainbow-ness. We have different colours for different things—blue for family and kids, purple for my wife, green for my work, orange for my travel. And then we have some other colours that I can’t even figure out what the heck they are by looking at them right now. Without iCal, we would have no idea what’s going on.

On having a family acronym:

It’s going to sound insane but we have a family acronym: HAHU. It stands for “Hustle. Anticipate. Heads Up.” It was originally designed for when we would travel with three little kids. When you’re at an airport, you’ve gotta hustle. You can’t dawdle. You have to anticipate what’s going to happen next. And heads up means you’ve gotta watch where you’re going and try not to bump into people. It has ended up being an enduring acronym in our house — we use it all the time.

In the photograph on my computer desktop, the five of us are sitting on a bed in my daughter’s dorm room with a white board that says #HAHU. 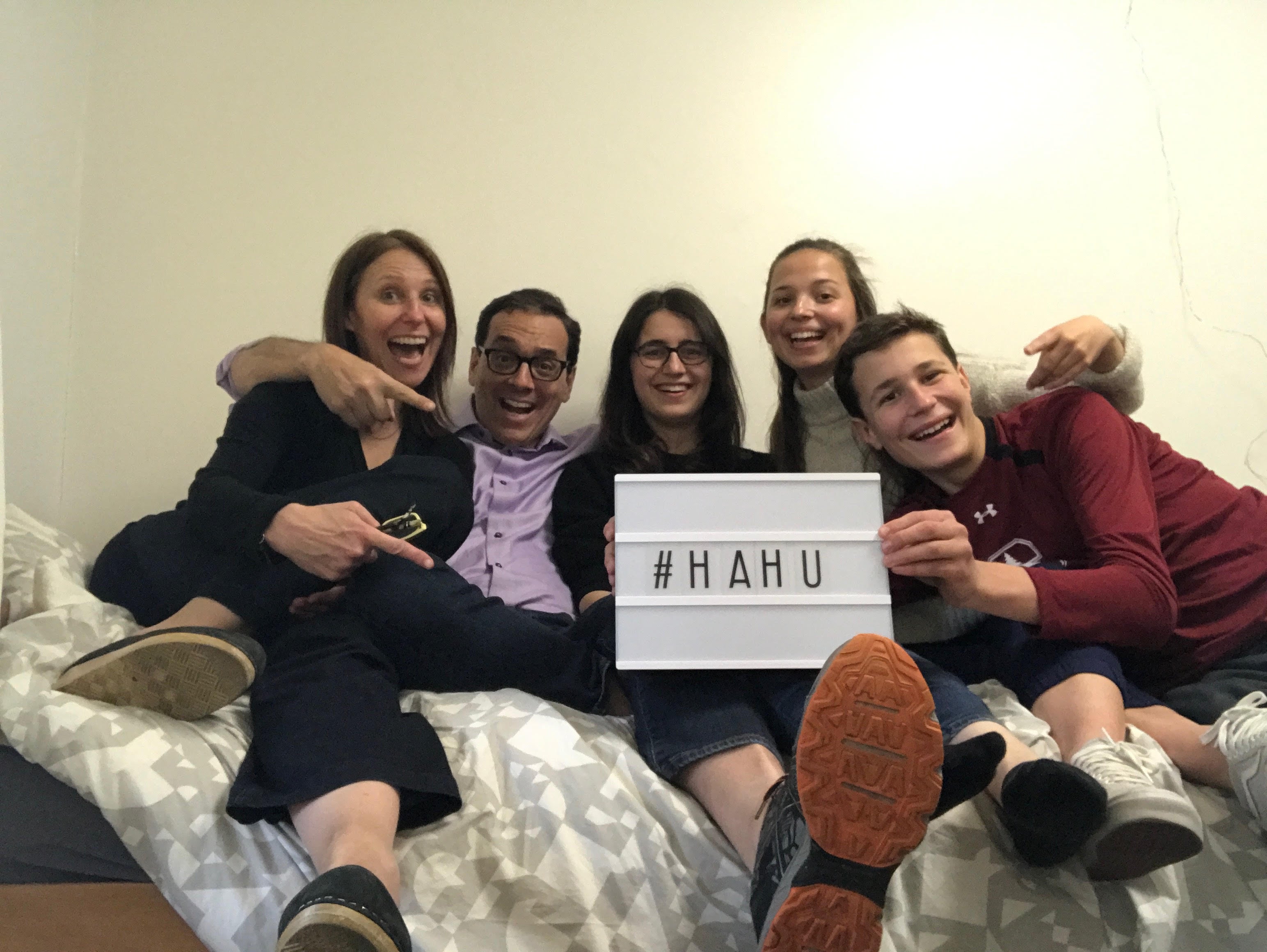 On letting his kids have their own domain:

My son has played sports his whole life. I’m not a fan of parents going to every or most of their kids’ sporting contests. When their parents are there, kids spend too much of their time thinking about their parents or looking up at their parents or wondering what their parents think. It’s their game. As a sports parent, I’ve tried to step back in ways I think some people find a little surprising.

On family chores (and how he’s applied his research on motivation to parenting):

We have never paid our kids to do chores. I think it’s a terrible idea. We have given them small amounts of money to, you know, go get a slice of pizza after school or do whatever modest things they’re going to do on their own. And we always ask them to do stuff around the house, like take out the garbage or empty the dishwasher or set the table.

What happens is that if I were to pay my son to take out the garbage, he might do it initially—he’d be psyched to get money for taking out the garbage. But then it might get a little bit boring and he’s going to want more money and if for whatever reason, I decide to stop paying him, then I’m not going to get the garbage taken out anymore. The signs of motivation tell us that people do things for different reasons. We can do things for remunerative reasons or we can do things for moral reasons. Trying to combine those two never works very well.

On a favourite family ritual:

We are a devoutly areligious family. We do not participate in any organised religion at all. And yet I understand some of the value of organised religion and community building and some of the rituals. We don’t celebrate Christmas or Hanukkah or Kwanzaa, but we do have our own ritual for the winter holidays. Since our kids were really little, we have made homemade pudding on New Year’s Day and call it Lucky Pudding. The goal of Lucky Pudding is to get your year off to a lucky start. 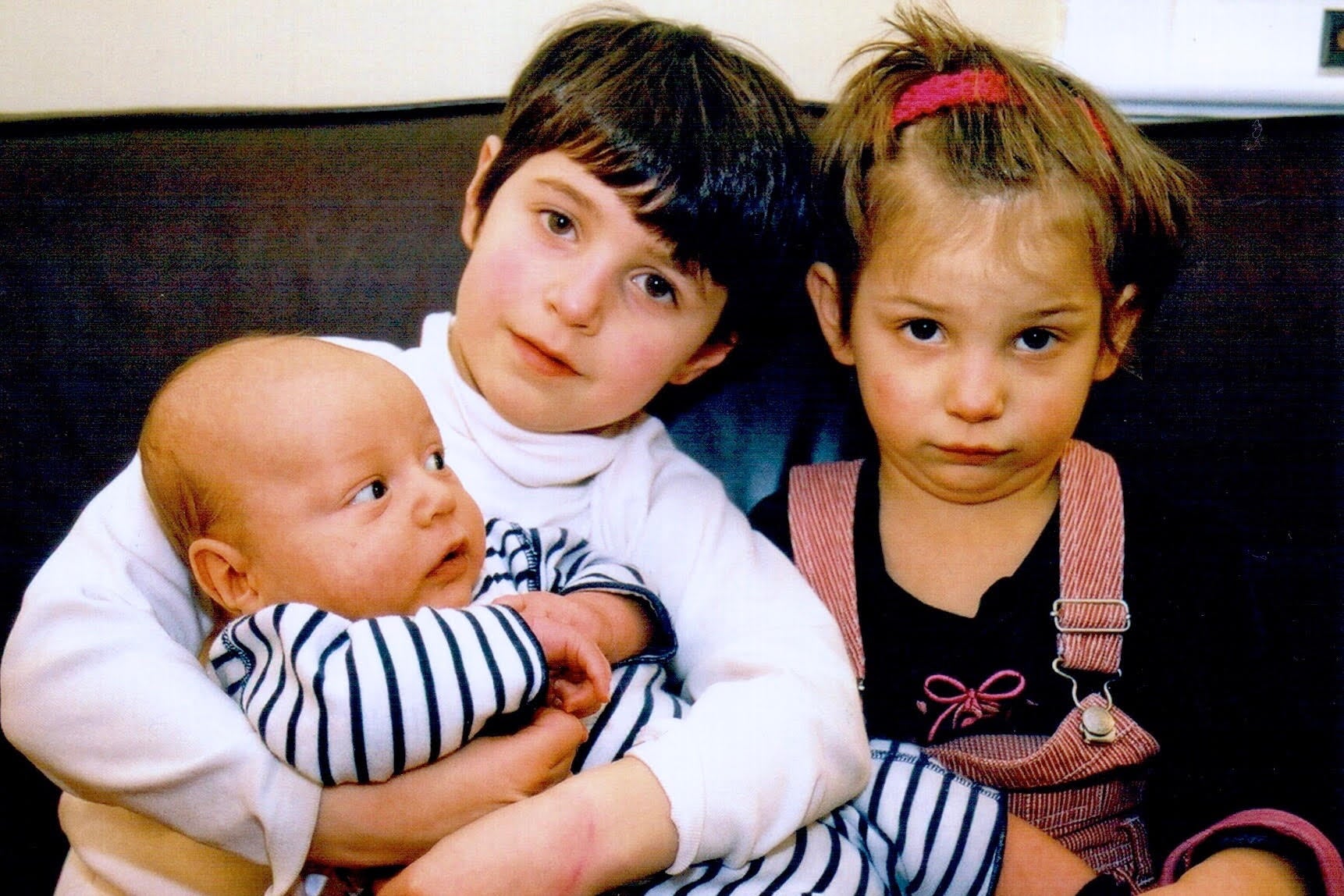 The Pink kids when they were younger. (Photo: Courtesy of Daniel Pink)

On how he decompresses:

When my kids first started school, my wife and I would run together because it was efficient. We could both get exercise at the same time and talk about, like, what we were going to have for dinner or about some playground problem one of our kids was having. Now my wife doesn’t run as much because of an injury, but I still do. I’d be a sub-functional person if I didn’t run.

On a parenting moment he’s ashamed of:

Many years ago, we were all driving around in our neighbourhood when my son, who was two or two and-a-half, started screaming in the backseat. Screaming. Just yelling at the top of his lungs. This was one of those moments when I was probably behind on some deadlines and we didn’t have any food in the house and the toilet was backed up and one kid had to go to dance and the other kid had to go to pottery and we were late for both of those things.

That is a horrible thing for a parent to say and no parent would ever do something like that except he called my bluff and started yelling even louder. So I stopped the car, unbuckled him from the car seat and put him on the footpath. Then I got back in the car and slowly started driving away. The rest of my family was stone silent.

My wife was like, “Oh my God, I married a mad man.” That’s when I realised I had reached my cracking point. Here was this little guy standing on the footpath in the bright sunlight. He had stopped screaming because he was so scared. I drove back and put him back in his car seat — I didn’t even get a full block. I have regretted doing that for 14 years.

On a moment he’s proud of:

This one is strange, but it’s the first thing that comes to mind. When our daughter Sophia was in high school, she had a a phone interview for some summer thing she was thinking about doing. She was maybe 15 years old and had never done an interview before. So we told her to think about the questions they might ask and how she might answer them.

And then we said, “Also, they’re probably going to say, ‘Sophia, do you have any questions for us?’” She looked at us and said, “What?! No, they’re not. They’re interviewing me. I’m not interviewing them.” And we were like, “Well, just think one or two questions anyway.” So she has her interview and—I remember this moment—she comes down the stairs and the first thing she says is, “They asked if I had any questions.” I think it was the first time in her life that she realised that her parents were not complete morons.

On advice he would give parents juggling a career:

You know, kids are much more resilient than you think. If they don’t have a bath one night, they’ll live. If you miss a school performance once, they’ll be fine. They don’t have an Excel spreadsheet counting “How many stories did my dad read me?” or “How many lunches did my mum make?” They just want to know that you’re there and you care.

[Kids] don’t have an Excel spreadsheet counting “How many stories did my dad read me?” or “How many lunches did my mum make?”

On a parenting truth:

I once had a boss who told me, “It’s going to go really fast.” I went through stages. The first stage was like, “Yeah, whatever, old man.” The second stage was, “Hey, it is going kind of fast.”

And the third stage was, “Oh my God, he was right.” I try to tell other parents the same thing. I’ll say, “You’re probably not going to believe me, but it goes really fast.” When people realise that and just pay attention a little bit, they derive a lot more satisfaction out of the whole experience.