Like any other seemingly-hardcore workout space, indoor climbing gyms can be intimidating places for first-timers — but they don’t have to be. In fact, a common misconception about climbing is that to get started, you have to have a ton of upper body strength.

“Seventy per cent of my students can’t do a pull up, can’t do a push up, or really struggle with one,” Tess says. Lack of upper body strength can actually be a secret weapon, forcing you to focus on proper technique rather than using brute strength to scale a rock surface.

“It’s harder to learn technique than it is to build muscle,” says Tess, who finds herself often sharing tips that help beginners feel more at ease on the wall.

Once the domain of mountaineers and outdoor adventurers, rock climbing is moving swiftly into the mainstream thanks to a growing number of indoor climbing gyms cropping up in urban areas. These gyms typically offer a few different types of rock climbing. Some, like top roping and lead climbing, make use of ropes and other equipment.

But many newcomers start with bouldering, a style of climbing which doesn’t require any fancy gear because you rarely ascend more than 4.57m off the ground. The only piece of equipment you need to start bouldering is a a pair of specially designed shoes, which are available to rent at most indoor gyms.

No matter a person’s fitness level, body shape, or gender, everyone can get a great, full-body workout – and have a lot of fun – by following these six simple rules of climbing: 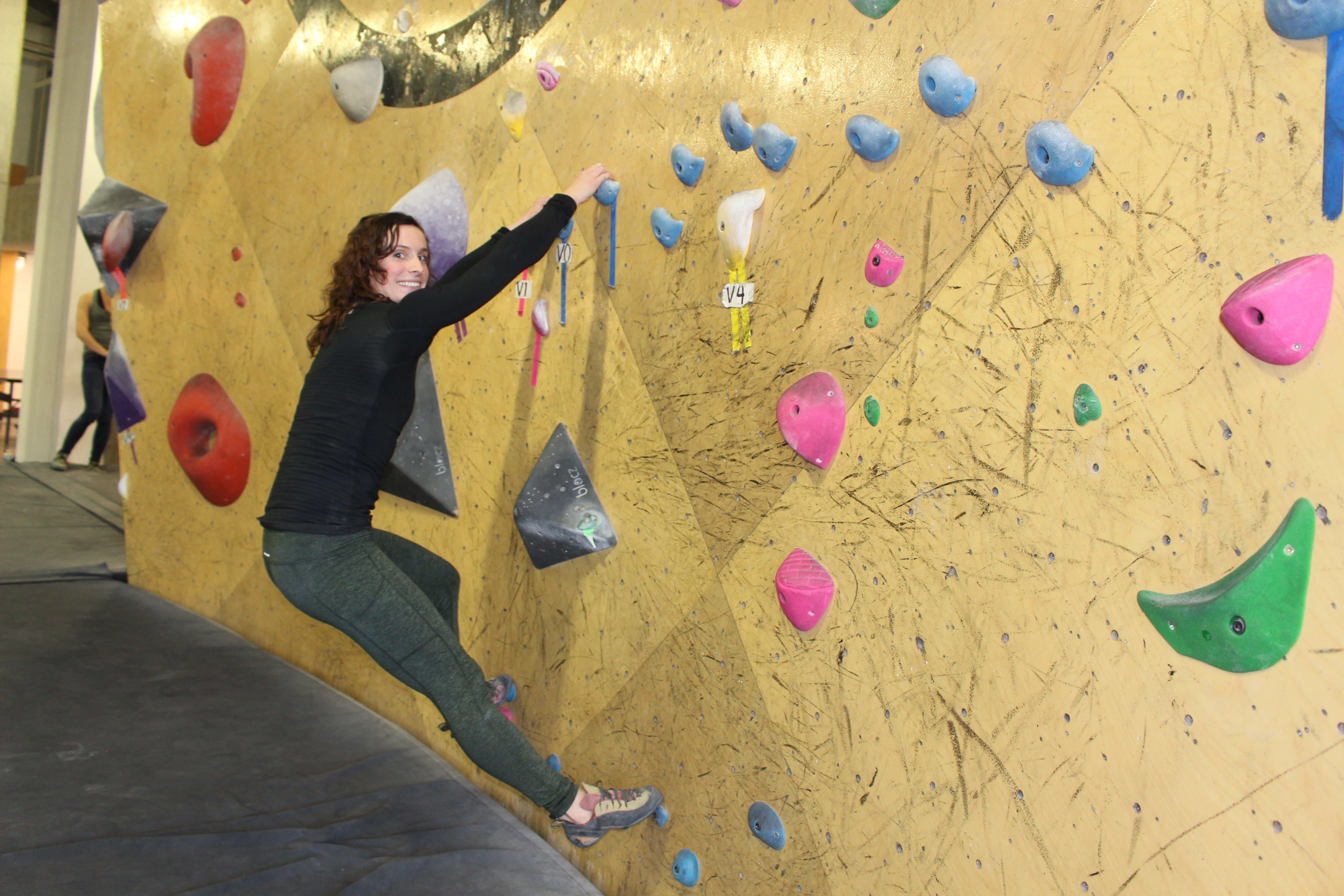 The rookie mistake: Dangling several feet off the ground, many of us feel a natural instinct to use our biceps to pull our faces as close to the wall as possible. But clinging onto the wall with “T-Rex arms”, as Tess calls it, means you’ll exert a ton of energy and tire out quickly.

The hack: Instead, try dangling with straight arms as though you’re a little kid swinging on the money bars. You’ll have better endurance overall (and you won’t be immediately pegged as a first-time climber).

Reach higher by twisting your shoulders 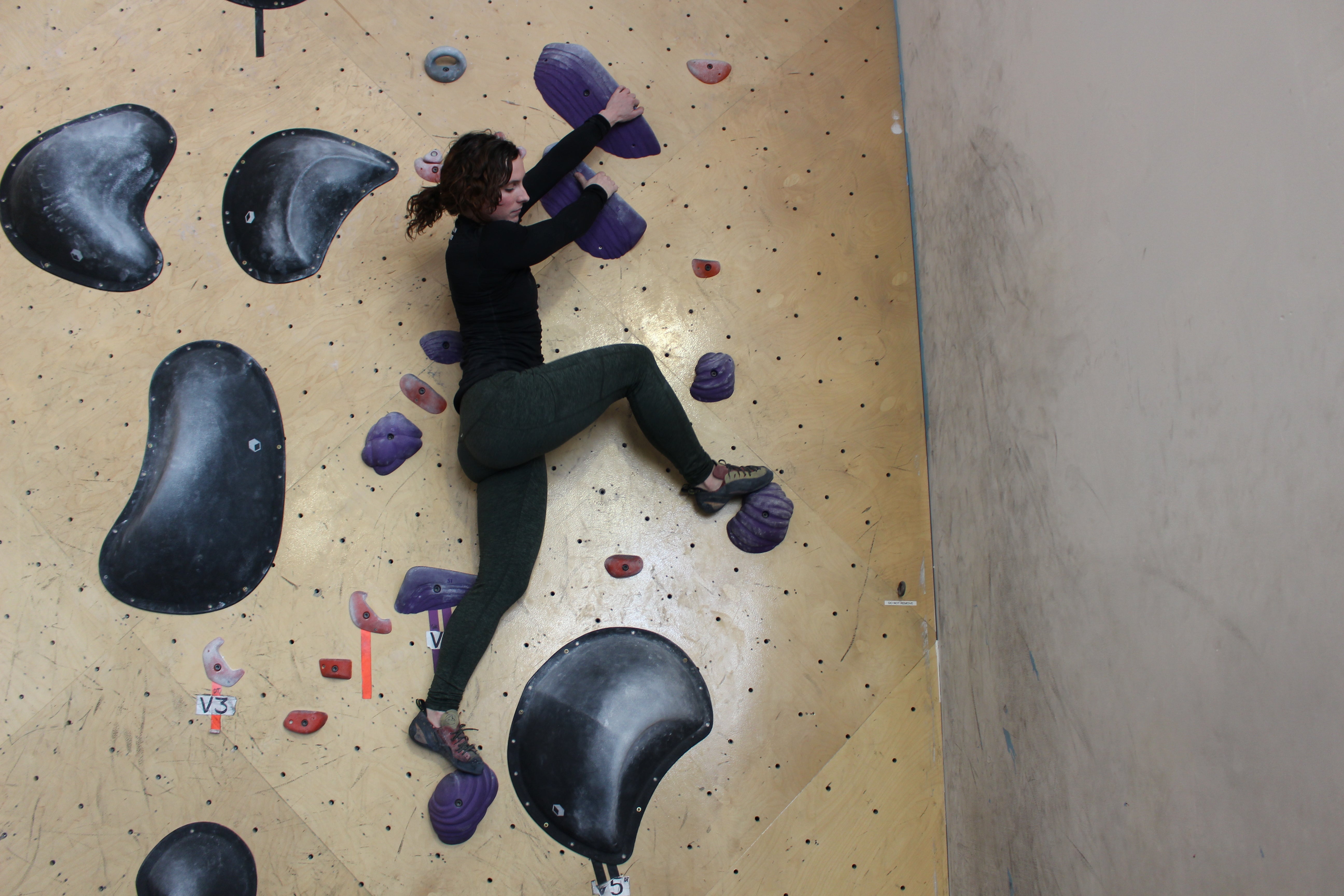 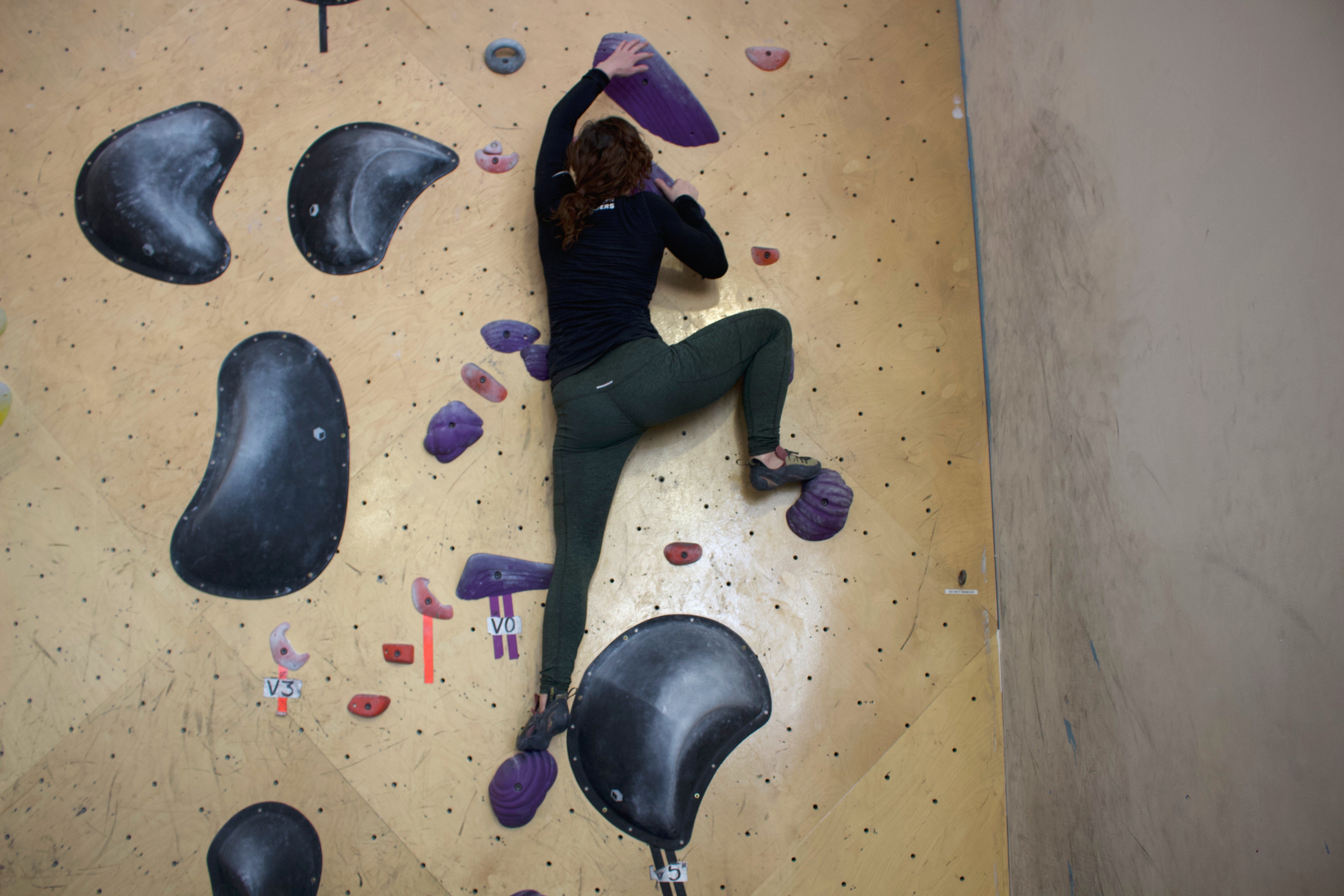 The rookie mistake: Another natural instinct among first-time climbers is the tendency to keep your shoulders completely parallel to the face of the wall and perpendicular to the ground.

But with armpits and hip points glued firmly to the wall, your range of motion will be limited, making far-away holds seem impossible to reach.

The hack: Imagine twisting your shoulders at an angle, similar to the way freestyle swimmers angle one shoulder back and the other forward to extend their stroke.

Once you start experimenting with the angle of your shoulders, your hips will follow. Soon, you’ll find that your reach is longer, and you’ll be able to grasp holds that once felt impossibly far away.

Use your toes, not your feet 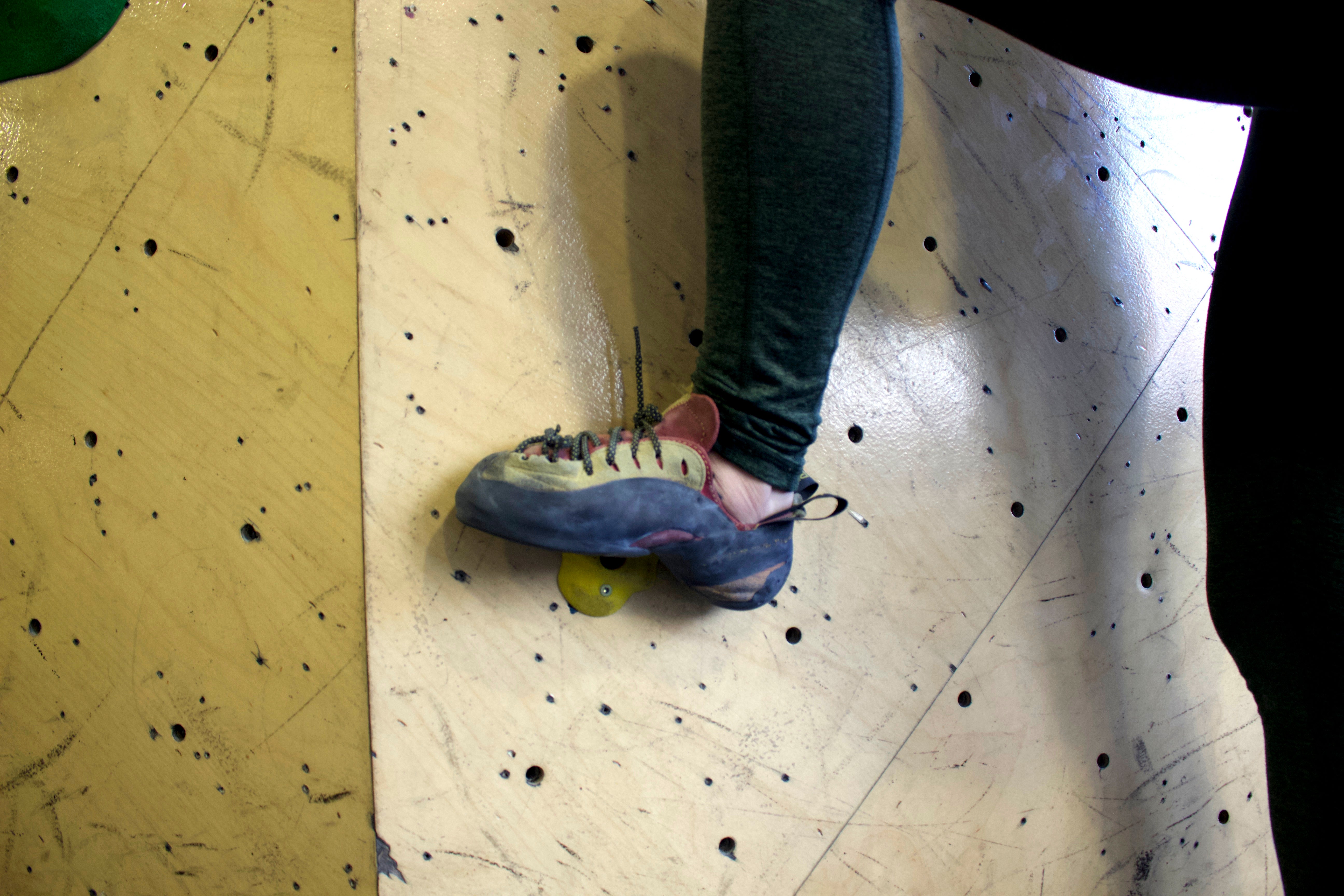 The rookie mistake: Climbing shoes are notoriously snug around the toes, but the tight fit is for a reason – they’re designed to funnel all your weight into the rubber, pointed toe. A common mistake most beginners make is to scale a wall by stepping on the arches of the foot, as though climbing a ladder.

Lead with your hips, not your hands 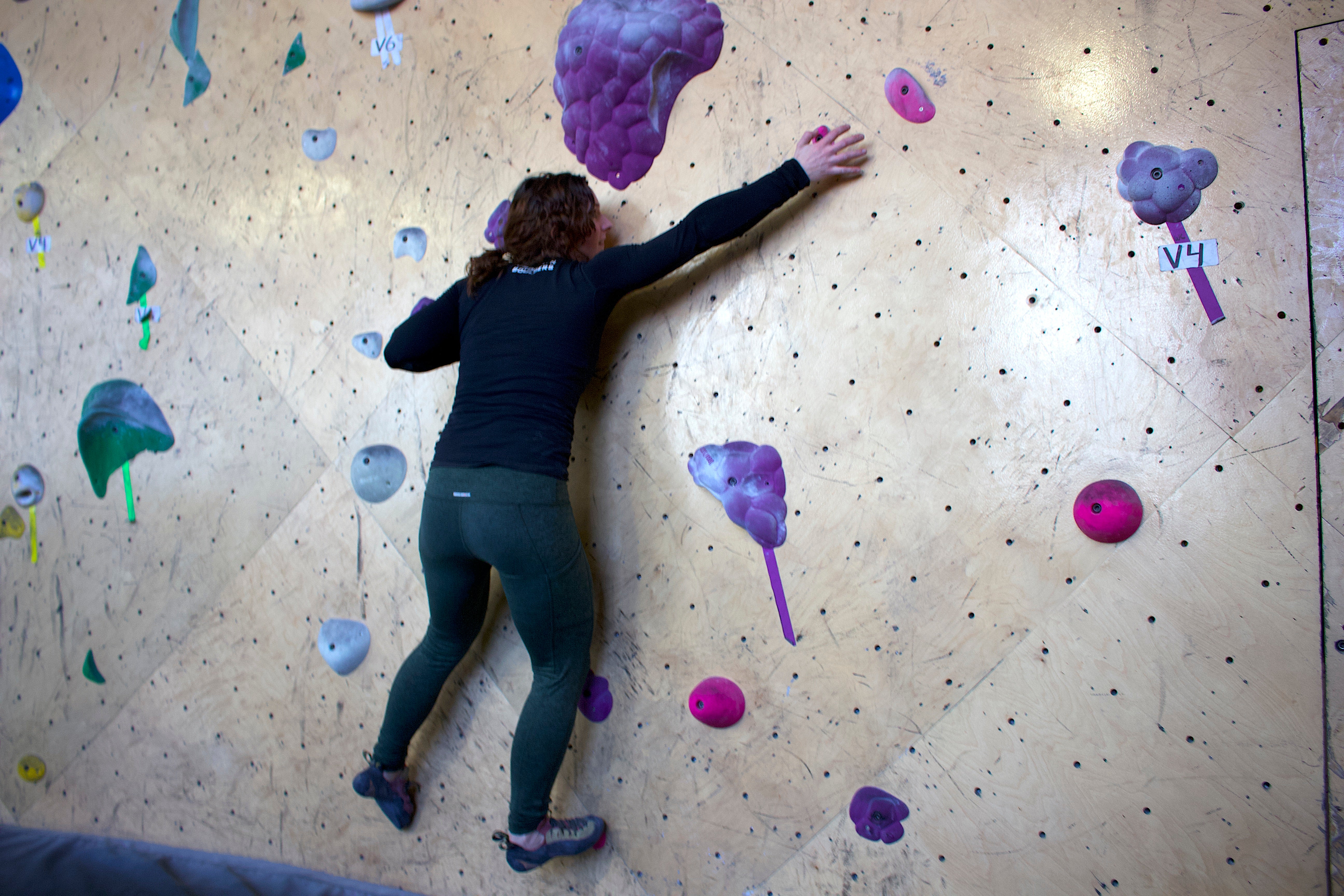 The rookie mistake: When climbing, it’s easy to think about reaching for the next hold with your hands, harder to think about about using the rest of the body. The impulse to reach out for a hold while balancing precariously often means your body will subconsciously counterbalance by leaning hips in the opposite direction.

The hack: When you’re trying to move toward a hand-hold to the right of your body, don’t reach for it with your hands. Instead, lean towards it with your right hip. Once your center of gravity is centered further to the right, that right-hand hold will be easy to grab. In this example, Tess carefully studies a route (marked by yellow holds), then imagines each move before she jumps on the wall. It’s helpful exercise that minimizes the chance she’ll get stuck halfway up the wall, burning precious energy because she can’t figure out what comes next.

For beginners, a good way to get into the habit of “sequencing”, or visualising a climb, is actually by watching other climbers, particularly those that are around your size, to see how they complete a route. 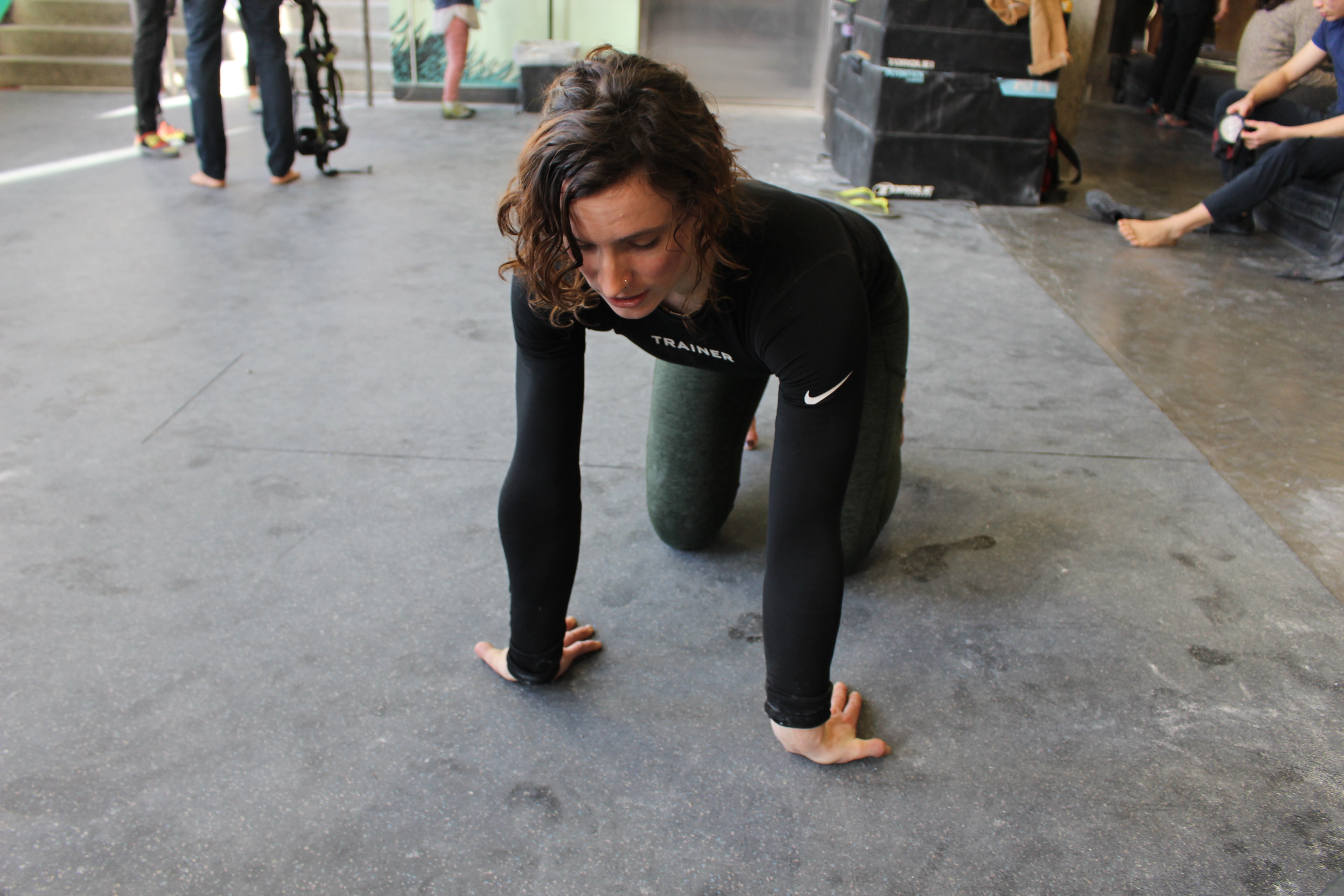 Rock climbing is unlike most other exercises in that it makes use of almost every muscle in your body. For most people, one of the first things to tire out is our arms, and in particular, hands and forearms.

“Almost nobody starts off with forearm strength,” says Tess. That’s why it’s a good idea to know a few simple stretches that can help you reset and keep climbing, or just help your muscles feel better after you’re done for the day.

The first is a forearm stretch, designed to target the wrists and inner forearms. You can do this by pressing the palm of your hand against a wall, or against the floor, with your fingers pointed down toward your toes. This will create a stretch for the muscles in your forearms, which are the quickest muscles to tire for new climbers.

Next is a tricep stretch which will help relieve tension in the shoulders and upper arms. You can do this stretch by bending one elbow above your head, using your other hand to bring the elbow closer to your midline. You should feel the stretch in the back of your upper arm. Alternatively, you can also use a jump rope as a prop to push into the stretch, like Tess demonstrates above.

All of these tips aside, the most important thing about climbing is just to get out there, recognising that climbing gyms are friendly places where beginners are welcome and more advanced climbers are happy to share tips.