How Tokyo Hacks Its Streets And Subways

japantokyo
Facebook may have decided that you shouldn’t see the news, but we think you deserve to be in the know with Lifehacker Australia’s content. To sign up for our daily newsletter covering the latest news, hacks and reviews, head HERE. For a running feed of all our stories, follow us on Twitter HERE. Or you can bookmark the Lifehacker Australia homepage to visit whenever you need a fix.

Western cities like New York, London, Sydney and Melbourne are great to wander in — they are all pretty safe, pedestrian friendly, and laced with public parks and waterfronts. But when Lifehacker sent a team to Tokyo to find the local hacks, damn was I jealous of the city planning. There are lots of touches that make Tokyo easier to navigate and a lot more pleasant to explore.

Footpath Guides for the Blind 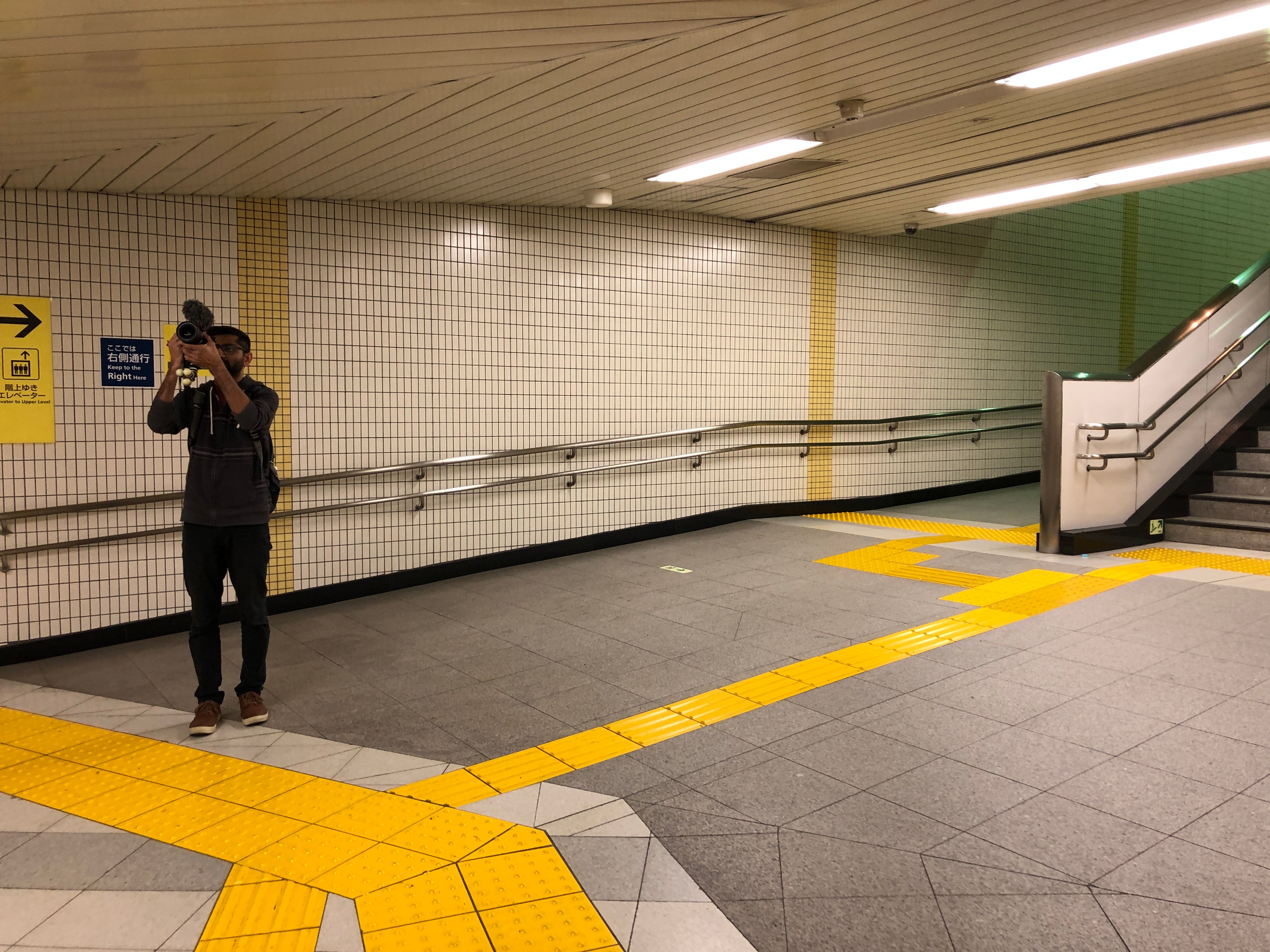 The most impressive street feature is the yellow strip that runs along many city footpaths, and down into the subway. Raised lines indicate a continuous path along the footpath that the seeing-impaired can follow. At corners, the path runs into a strip of raised dots to indicate the curb. The dots I’ve seen in many cities; the lines, never before.

As an engineer’s blog post explains, there are also panels of raised dots to indicate turns and forking paths. While these stripes are only on certain streets, they still form a surprisingly wide network around the city. In Tokyo, pedestrians strictly obey crosswalk signals, which is against my religion. And as a visitor, you should obey too, or people will glare at you and make you feel like an ugly American. But the wait for the crosswalk is made more bearable by the crosswalk indicators at some intersections.

I’ve seen plenty of “walk” countdowns before. But Tokyo also has “don’t walk” countdowns, which tell you how long you’ll have to wait until you can walk.

The countdowns aren’t numbers; they’re two lines of LEDs on either side of the signal. (In the photo above, the green lines are just above the walking-man signal.) As time runs out, they shrink, like reverse progress bars.

If you’re zig-zagging through the city, walking with the light, these progress bars can shave whole minutes off your trip. You can wait a couple seconds for the signal to change, instead of walking down the block and later getting stuck at don’t-walks. And when you walk for more than an hour a day, those seconds add up to a lot of saved time.

Tokyo’s footpaths are often crowded, especially since pedestrians share them with bikes. But bikers tend to go slowly enough, and make enough room for pedestrians, that it’s not the problem you would expect. This wouldn’t work in a place with as many delivery bikers as New York. And it’s still less pleasant than pedestrian-only footpaths. But I was shocked at how politely the bikers snuck around walkers, and how little I raged at them.

As in most big pedestrian cities, Tokyo walkers generally split into lanes, with everyone walking on the left. It only took me a day to get used to switching sides. It’s no stricter than it is in New York, just an unwritten rule that keeps things moving smoothly. 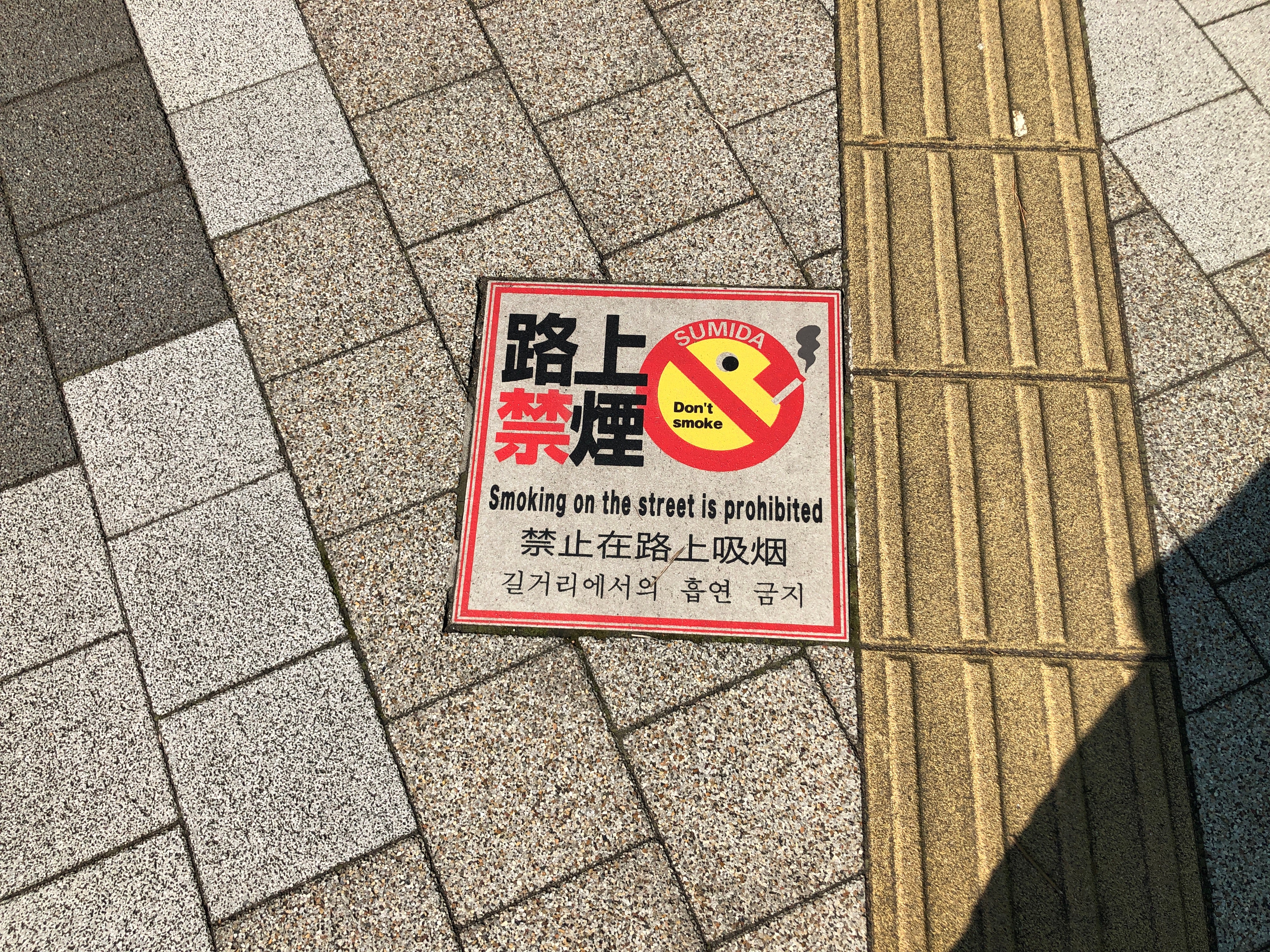 If Pac-Man smoked, how would he hold his cigarette? (Photo: Nick Douglas)

You can’t smoke on the street in central Tokyo. This should be true everywhere with pedestrian traffic. It is insane that New York City bans smoking in restaurants, bars, and parks, but not out on the footpath that every New Yorker has to use.

It’s completely normal in New York to see someone strolling along, difficult to step around, smoking right next to kids, babies, and pregnant people. I’m constantly manoeuvring around smokers on the street, feeling like I’m the arsehole for not wanting a big breath of secondhand cancer juice in my face.

It’s not that people don’t smoke in Tokyo. There are plenty of cigarettes for sale at every kiosk and convenience store. But smokers have to find designated stands, or go to an establishment with a smoking section. (I walked into a pachinko parlor — I hoped pachinko would be like pinball, but it’s more like slots — and my clothes were instantly soaked through with the smell of tobacco.)

Etiquette guides say that you shouldn’t eat or drink out on the street either, but I saw it happen every day, even on the occasional train. It’s just not super common. Most streetside food spots — even the 7-11s — have a few chairs where you can scarf down your snack and throw out your trash before you walk off.

In a whole week of walking around the city, in touristy and non-touristy areas, I maybe saw one person smoking in the street, in a back alley. (Tokyo has a lot of pedestrian-only alleys, and streets that only get the occasional car, all of which are pretty safe. Day and night, people walk down the middle of these streets.)

For that matter, I didn’t see many people wearing headphones or reading their phones on the footpath, a huge departure from New York. A bunch of people walking around without smoking, eating, or catching up on podcasts. Is that relaxing or stressful? 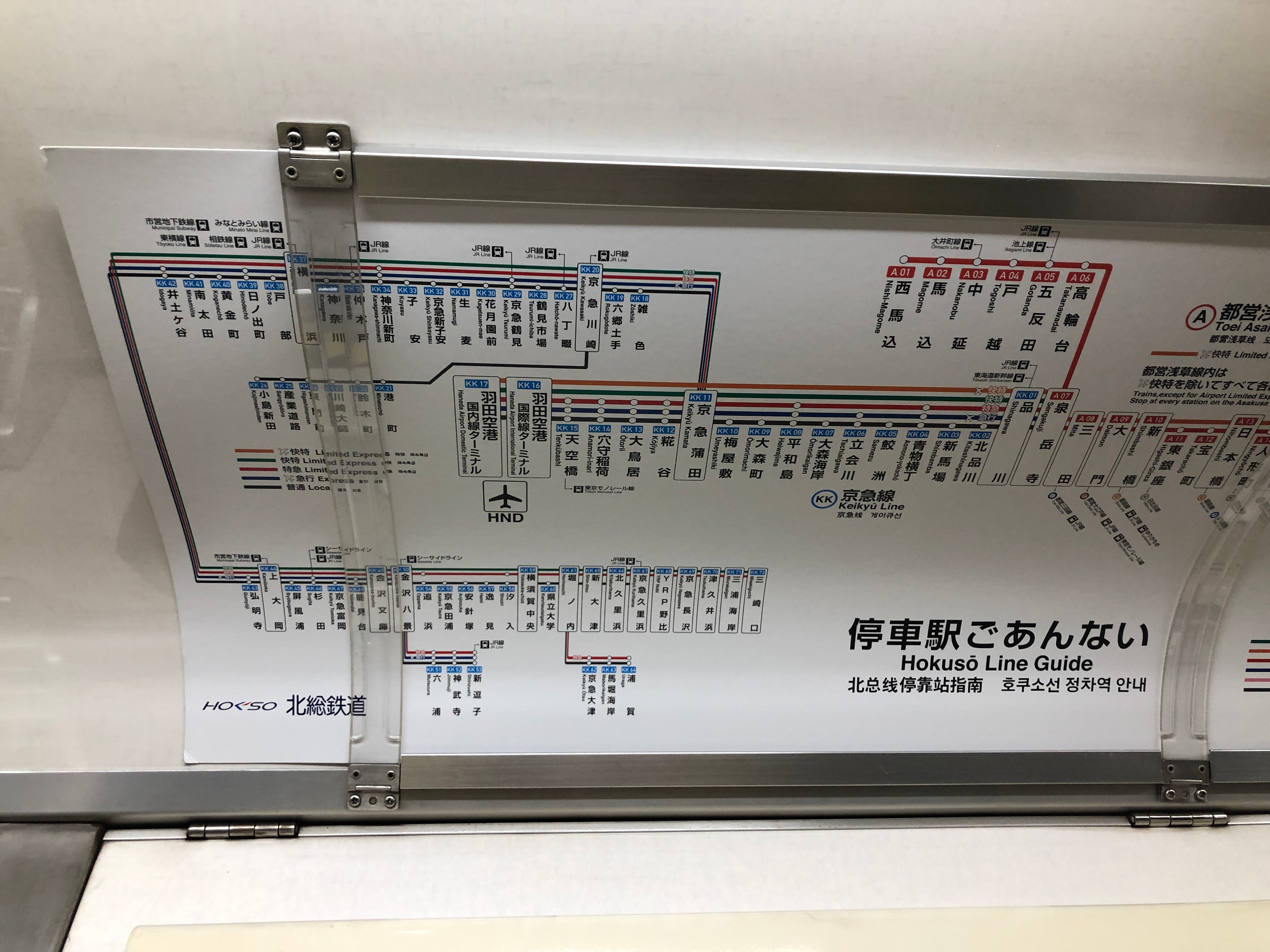 Tokyo’s subway system was easy to navigate…compared to New York. Really, thanks to Google Maps and full cell service on the trains, I hardly ever got lost or confused. There are several high-level reasons that other cities can’t copy — for example, Tokyo doesn’t tend to run multiple train lines on the same platform, so it’s harder to accidentally get on the wrong train.

Nor does it constantly declare that your train is suddenly taking a detour. The trains are quiet and the announcements come out loud and clear in multiple languages. It would take major work to bring other city transit up to this level. But there’s a big factor that every city could easily, cheaply implement: thoughtful signage.

And Tokyo’s subways help you do it. When you pull into a station, you’ll see plenty of signs on the wall and along the platform indicating where you are. (A lot more than you’ll see in New York.) And the signs on the wall will usually indicate the next stop and even the last stop.

On some platforms, lines indicate where the subway doors will land, so riders can line up by—not in front of—the doors. And the raised yellow lines help the sight-impaired find their way onto the train. 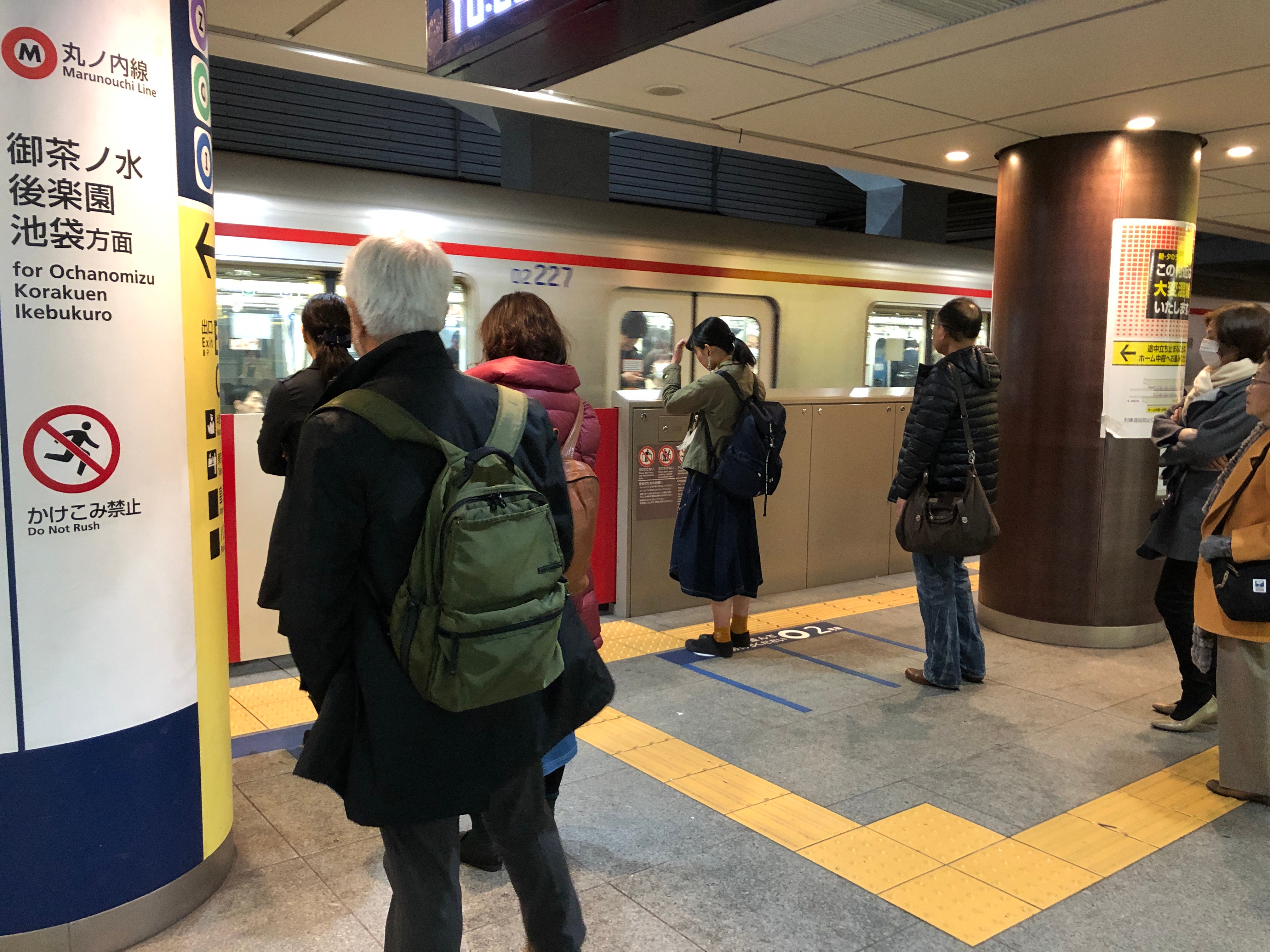 Passengers line up, aware that they make a better door than a window (Photo: Nick Douglas)

Inside the train, static and digital signs lay out each line’s route, often offering the same information in multiple formats. The signage covers all your bases, so even in a panic, you should be able to figure out your next step by the time you reach your stop.

Now, the system isn’t perfect. Tokyo’s trains are run by multiple transit authorities, and while the systems are mostly well-integrated — they accept each other’s metro cards, and they stop at the same stations — I still managed to swipe into the wrong part of the station, and an attendant had to swipe me back out so I could find the right train system.

And Google Maps doesn’t make it clear when you’re going to pay two fares for your ride, or offer a clear option for only showing routes that stay within one transit system. And the trains don’t run all night. But I’d still trade in New York’s trains for Tokyo’s in a second. 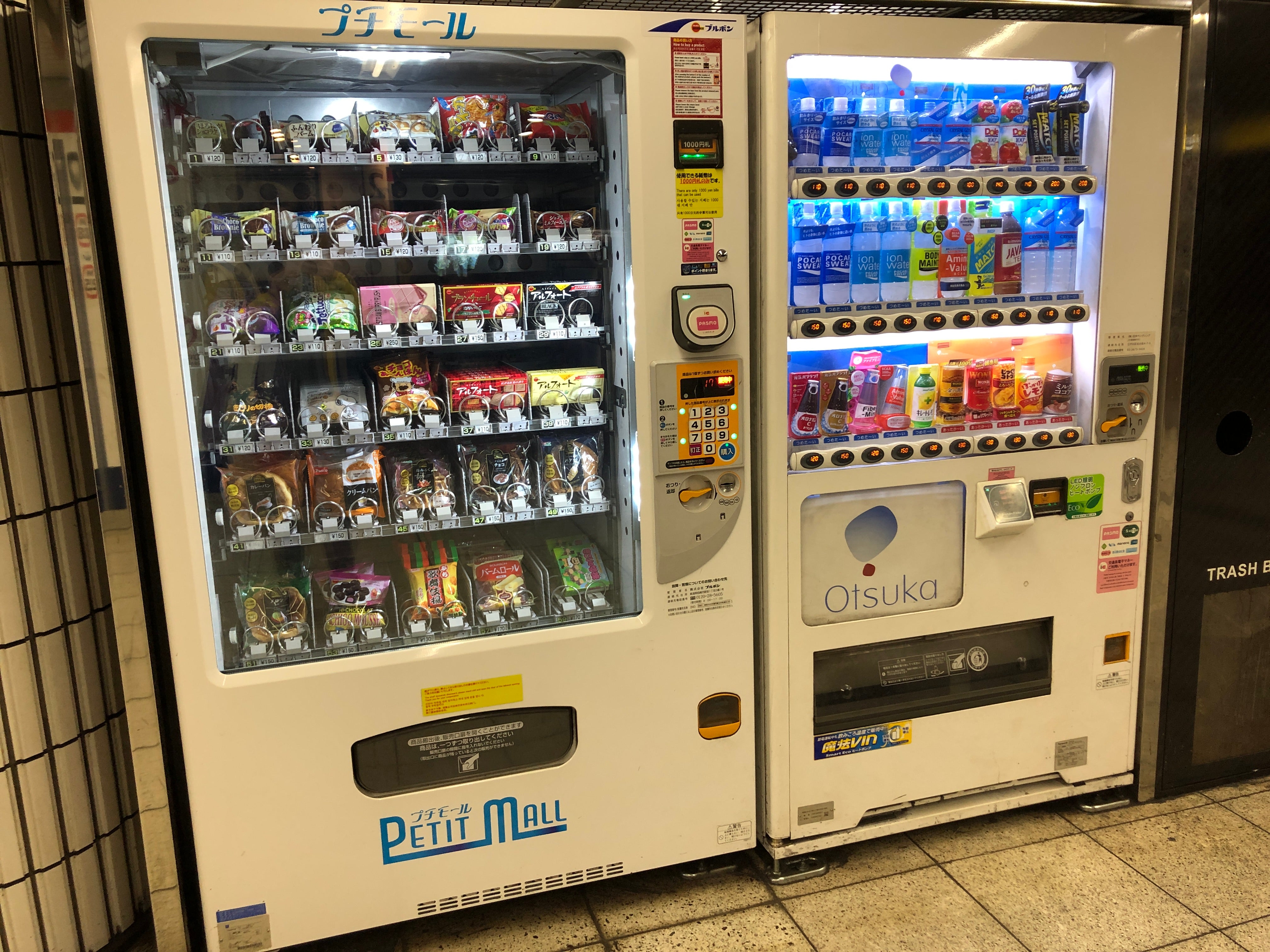 Tokyo has tons of vending machines. I’m not exactly sure why—I didn’t see people constantly using them or anything—but the city is stuffed with these machines, charging about a dollar for most drinks. There’s water and soda and iced tea, but most machines I saw also offer hot coffee.

Several brands and varieties of it. Beautiful. Essential. Paper cups and plastic lids are stupid, and we should all be buying hot coffee in a can.

There are also tons of traditional cafés and coffee chains, it’s not like the city’s automated its baristas away. But, to my horror, many of these cafés don’t open until 10. So it’s helpful to have a 24-hour self-serve option. Plus a lot of the vending machines accept payment via metro card.

Tokyo has bathrooms in every train station. This saved me when I got diarrhoea on my trip. New York used to have them at major stations, but they’ve been mostly locked up over the years, which is honestly an act of hostility toward commuters, visitors, and the homeless. Widely available bathrooms are a quality of life issue.

These bathrooms are a little cleaner than they might be in New York, but it’s not like they’re pristine. One thing that helps is a lack of paper towels to pile up in the trash: Many of Tokyo’s bathrooms, public and private, lack paper towels and hand dryers.

So as Lifehacker’s Patrick Allen has advised, carry around a handkerchief. (Some public bathrooms have a bum-washing spray, and everywhere I went had toilet paper.) I never really minded pulling out my kerchief to dry my hands; I was grateful for any working bathroom on the run. 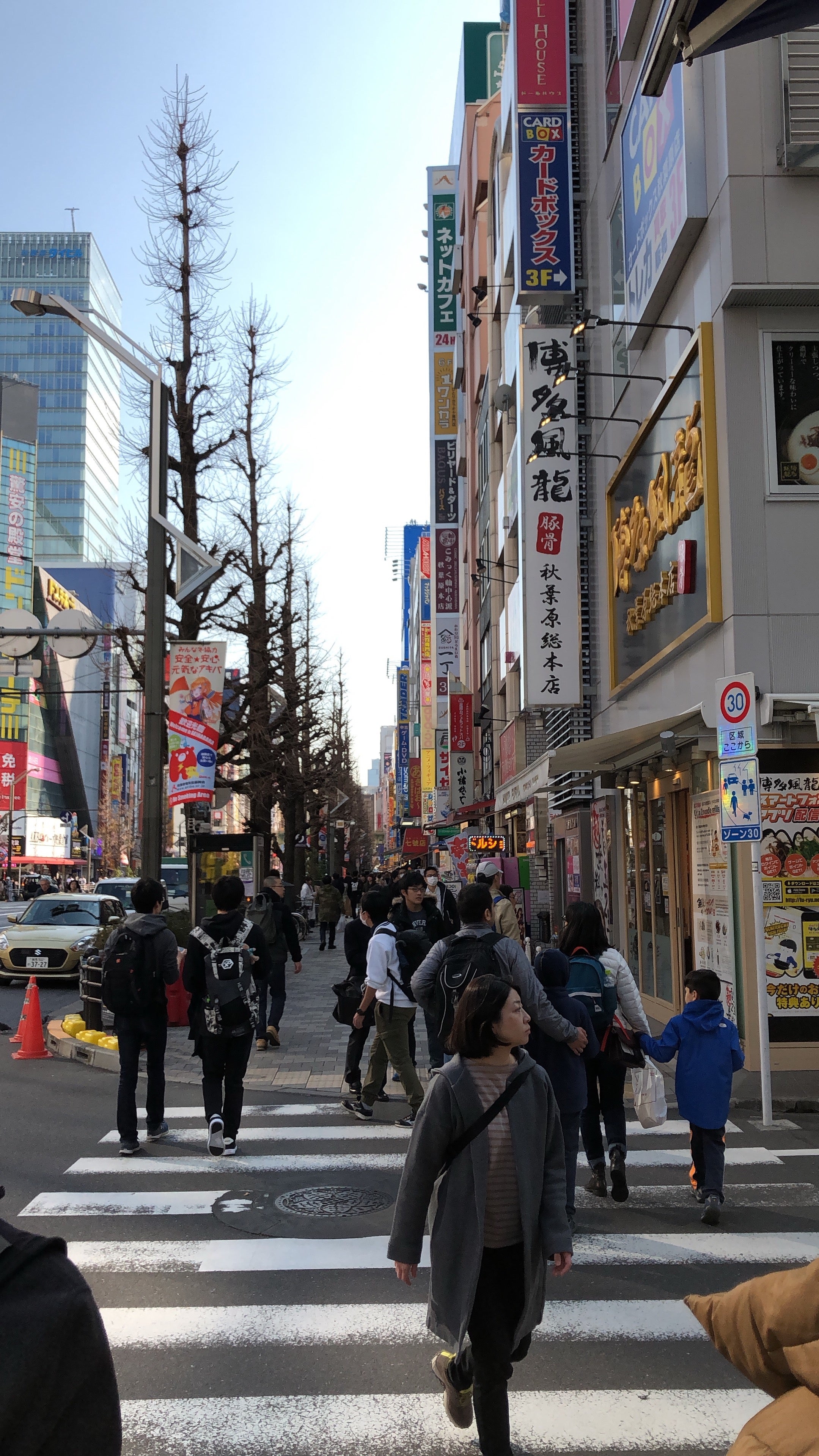 Tokyo doesn’t have trash cans on the curb. You’d think this would be a downside! And it can be a pain to carry trash around in the street or on the train. But you can throw out trash in convenience stores, and toss bottles into the built-in holes in the vending machines.

So you can easily get by, and reap the biggest benefit of no open trash cans: No garbage spilling out of those cans, or whipped out by the wind, scattered around the street.

Of course, most cities can’t just rip out all their curbside cans and expect everyone to hold onto their trash. Litter is a culture problem, and I don’t know how you could better enforce no-litter laws, without handing our cops even more power over vulnerable citizens. But damn, New York is dirty, and if we dealt with our trash better, it’d be more pleasant to live here, and maybe the rats would stop multiplying.