How To See If Someone Is Tracking Emails They Send You

email appsemail tracking
Facebook may have decided that you shouldn’t see the news, but we think you deserve to be in the know with Lifehacker Australia’s content. To sign up for our daily newsletter covering the latest news, hacks and reviews, head HERE. For a running feed of all our stories, follow us on Twitter HERE. Or you can bookmark the Lifehacker Australia homepage to visit whenever you need a fix.

A few years ago a friend that works in PR told me about Streak, an email tracking service that lets you know when someone has opened a message you send them, sometimes with details about where that opening happened and even what device they were on when they were reading it.

He was using it to see when journalists received messages he sent them. While I wasn’t particularly thrilled that he and his coworkers were spying on whether or not I was actually reading what they sent me, I liked the idea of flipping the tables and using it myself.

I never pay attention to where someone opens an email, but I have to admit it’s nice to know that they’ve read it and are choosing to not respond rather than wondering if it’s been sent into a black hole/to an inactive email account.

As both a user and recipient of tracked emails I don’t care so much that I’m being tracked as much as I care that I’m not aware of it. Ugly Email is a Chrome and Firefox extension that can help.

Once installed, it will show an eye icon beside any emails that are using tracking software. It also blocks those trackers, so you’ll know that the sender’s intention was to find out when you opened the note. 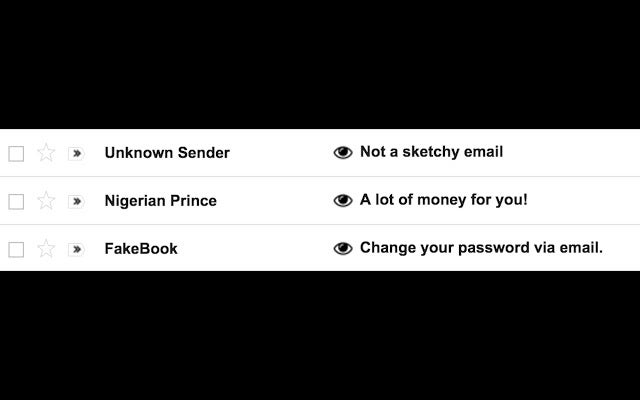 Spoiler: It’s a lot of people. A quick scroll through my own inbox found that not only were emails from PR reps being tracked but also emails inviting me to participate in a “Workweek Hustle” on Fitbit and check in for an upcoming flight.

It doesn’t block every track out there, but it handles a pretty solid list of them. According to the company’s site, it now blocks MailChimp, SendGrid, Drip, Streak, Mailgun, Bananatag, Yesware, TinyLetter, Postmark, Sidekick, Boomerang, and 20 others.

Even if you’re not too worried about folks tracking you it can be interesting to see who is.